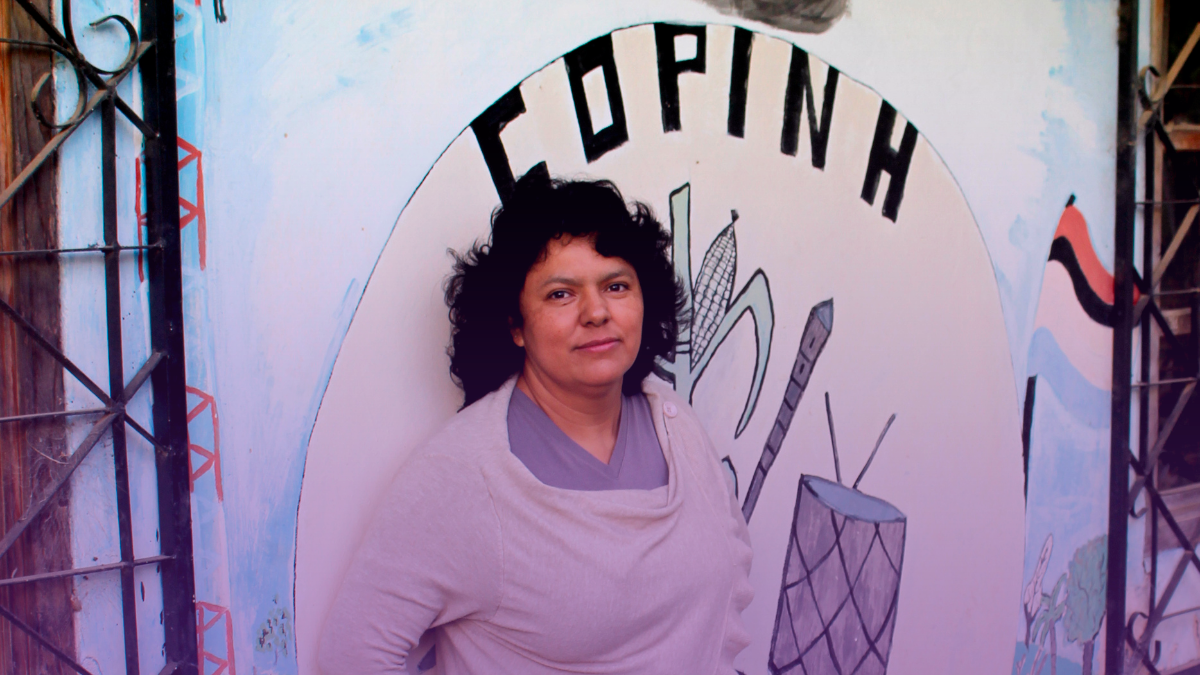 “We are demanding a feminism that really dismantles all forms of domination,” said Berta Cáceres.

Berta Cáceres was a Lenca indigenous leader who was fundamental to Honduras and the entire American continent. Coordinator and co-founder of the Civic Council of Popular and Indigenous Organizations of Honduras [Consejo Cívico de Organizaciones Populares e Indígenas de Honduras] (COPINH). Berta played a valuable role in building anti-capitalist and anti-patriarchal struggles in defense of territories and communities.

Always active in the struggle, Berta faced political persecution and the economic power of large transnational companies interested in the territories and collective assets of the people. On March 2, 2016, Bertawas murdered in her home by gunmen and since then her family and social movements have been demanding justice.

The fight for justice continues

In July 2021, businessman David Castillo was tried and convicted of coordinating Berta’s murder. At the time, Castillo was the executive president of the hydroelectric plant Desarrollos Energéticos S.A. (DESA) and the company was fighting over the territory of the Lenca people with the aim of building the Água Zarca dam project, which would affect all communities close to the Gualcarque River.

Before that, in 2019, the military men who carried out the crime, Mariano Díaz Chávez and Douglas Bustillo, had already been sentenced. But COPINH and the Cáceres family continued to demand the investigation and trial of the Atala family, who own DESA, and whose members are pointed as the masterminds behind the crime.

Due to her tireless struggle, which remains alive in her sisters and comrades, and will be carried out into the next generations, COPINH calls March 2 as the day to sow Berta, a day to remember her and cultivate her seeds. As a song from the Honduran movement says: “Berta didn’t die, Berta didn’t die, Berta became millions, Berta is me!”

Capire’s contribution to this date is, once again, to nurture Berta’s words to keep her memory alive. In 2021, we published a video and an audio clip of her during the 7th International Workshop on Emancipatory Paradigms, in Havana, Cuba.

This year, we publish excerpts of the chapter “The Resistance” [La Resistencia] from the book Las revoluciones de Berta, in which the feminist activist Argentina brings together conversations with Berta Cáceres. Berta herself, in these pages, stated the following:

For us, memory is very important and is, transversally, in all the thoughts of our heroes for independence, who fought in the resistance to colonialism and for the foundation of the Republic of Central America, but we also value the presence of more recent Resistance martyrs. Because their memory must be honored. Their example must always be present. Relinquishing one’s life is something very profound, it is the biggest thing that a human being can offer (…) We know that we are dealing with very powerful interests and that, as we advance, the reaction of these powerful sectors will be increasingly aggressive. So, for this reason, their spirits are with us in this hope, lighting the way and encouraging us to continue with great strength.

In the book, which is available for free [in Spanish], Berta talks about the process of popular mobilization against the 2009 Coup, about the foundation of COPINH and the development of feminism within people’s movements and about the multiple criminal persecutions experienced by those who defend the land. Finished posthumously, Las revoluciones de Berta features a conversation with Laura and Bertha Zúñiga Cáceres, Berta’s daughters, and tributes from her sisters and comrades. Read an excerpt from “La Resistencia” below:

A very important factor in our resistance is international solidarity. We want the call for solidarity with our people to reach social movements. We want to remind them that this situation is not just happening in Honduras, but for all the peoples of the world.

(…) It’s important that people know about Honduras now. Before, our struggles were not known. There was no Solidarity Committee with Honduras. It was even believed that we were a pro-Yankee people. No one ever knew that the people of Honduras were a base for the struggle in Central America, for the struggle in Nicaragua, El Salvador, Guatemala. We are not a disposable, domesticated people. And now, yes, we are getting a lot of solidarity.

I want to take this opportunity to thank the solidarity of all peoples of the continent, and in particular that of the Cuban people. For example, they tried to send Cuban doctors away after the coup and never succeeded. Cuban doctors are the ones who have been with the people in what is most essential, in one of the most difficult situations they experience: the lack of public health care, abandonment, total exclusion. There are areas with more than 50,000 people and maybe one or two doctors. And who are they? Cuban doctors. That is why Micheletti did not dare send them away from the country, because he knows that they are very close with the life of the Honduran people. And Cuban doctors remained at their posts, despite the dictatorship cutting the funds earmarked by President Zelaya for healthcare. They have resisted by our side, they go with us wherever we need to, even when threatened.

The anti-patriarchal and feminist struggle in COPINH

When we started COPINH, we did not think about feminisms. But what was always evident to the sisters was that we had to fight for women’s rights for ourselves. We began to notice that the women of COPINH were participating in the great national discussions with the presidents, with the councils of ministers, in the safety committees, as assistants of the city hall in the communities, that we were the first in the occupations of exploitative industries. There was a lot of strength from indigenous women. This made it possible for us, together with some feminist organizations that have a more social thinking, to get together and coordinate actions, for example, to demand the punishment of rapists and aggressors of women. (…)

We also had a constant complaint process, combined with this process of popular education and concrete work, in cases, for example, of rape and sexual abuse of children and women, women who were victims of violence… We had to deal with terrible cases and although we did not have a legal professional, we had to face them. And we learned from the process of popular education and from the concrete struggle.

In Honduras there was no strong feminist process. For a long time, it was something elitist, far from the reality of indigenous, black women who are fighting in their territories. I am not saying there were no feminists, valuable women. But this elite group did not go beyond its own limits, there were no impacts on the lives of women. We felt, in many cases, misunderstanding from some feminist groups that despised the indigenous issue, and sometimes we even felt a very evident racism. There is a lack of knowledge about the indigenous or black cause, and this has generated tensions.

In COPINH’s internal debate, being a mixed organization, we were discussing both racism and sexism, and this led to our statement as an anti-patriarchal, anti-racist, anti-capitalist organization. This step we took was a joy for our fellow feminists, but we needed to know better what each person was doing. (…) Let’s not be naive. We are demanding a feminism that really dismantles all forms of domination, not a made-up or demagogic discourse, but one that dismantles concretely and that confronts these forms of domination in various ways.

(…) In the current National Constitution, women are not mentioned at any time. Establishing our human rights, our reproductive, sexual, political, social and economic rights in the Constitution is a big step towards confronting a system of domination such as the patriarchy. That is why we women want to be protagonists, contributing to the debate, which I believe will be one of the most difficult, as we must face the fundamentalist and reactionary religious sectors. It is a challenge for women not to allow others to make decisions for poor women, who are the majority. Because this is also a struggle between the rich and the poor, between poor women and rich women, and that is very clear.

(…) The fact of having and ensuring women’s access to land, territory, cultures, health, education, art, decent employment – not just any job, but one that is decent and relevant for us women – and so many other things, are elements that we must guarantee in the process of a new Constituent Assembly, in order to proceed with the process of liberation.

Feminism has to help us women to continue contributing with colors, diversity, wealth, in which we really give the struggle another meaning, a meaning of life, of creativity, of art, and this is what gives the most strength to this movement for resistance.