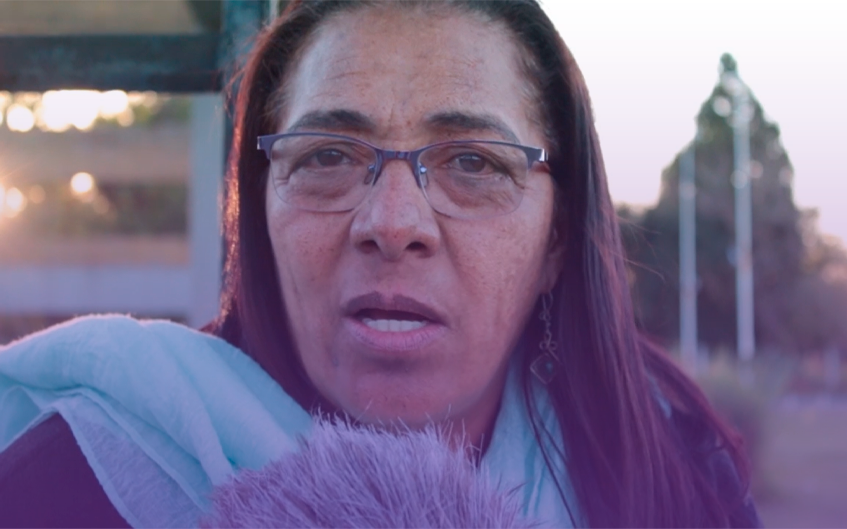 “We want women to feel that they are also part of the country’s productive process, and that they should be and become visible for who they are: protectors of land, production, seeds, and natural resources in a productive environment. We are the ones who participate the most in this process.” These are some of the words the Dominican peasant Elsa Sánchez shared with Capire during an interview at the 3rd Continental Assembly of ALBA Movements. Elsa Sánchez lives in the Dominican Republic, is a member of the women’s committee of the National Peasant Platform [Articulación Nacional Campesina] and the Federation of Southern Coffee Growers [Federacion de Caficultores del Sur—FEDECARES], which is a member of La Vía Campesina. Elsa has been a militant for many years in peasant organizations, especially with women and youth, and this is why she is also a member of the continental women’s platform of the Latin American Coordination of Rural Organizations [Coordinadora Latinoamericana de Organizaciones del Campo—CLOC-Vía Campesina].

In 2022, La Vía Campesina celebrates 30 years of intense collective struggles for land and food sovereignty, sowing hope and solidarity. In this interview, Elsa spoke about building popular peasant feminism in her country and about how necessary it is to make women’s primary role visible as they build food sovereignty on a daily basis in the region. She also talked about the situation of the struggles for legalizing abortion on three grounds (causales), because abortion is currently illegal with no exceptions in the Dominican Republic.

Elsa, can we start by talking about the organization and the struggles of the feminist movement in the Dominican Republic?

The Dominican Republic is a country with a long history of feminist movement organizing. We have a very serious problem of violence against women. Statistically we have the highest levels on the continent, a result of sexism and the cultural conceptions of women, their roles, and their participation in the household, in politics, and in society.

One of the biggest struggles we have had in recent times has been the issue of the penal code, which has been sitting in Congress for 17 years. We proposed that this code should define and allow abortion on three grounds. We have this whole struggle in the streets, organizations, and institutions across the country about the matter of the three grounds, and we will not give up until they are passed.

Inside our organizations, this is a matter that goes hand in hand with what we really are—that is, the matter of peasantry: women must be visible regarding the matters of land ownership, production, funding, and family participation in peasant production. We want women to feel that they are also part of the country’s productive process, and that they should be and become visible for who they are: protectors of land, production, seeds, and natural resources in the productive environment. We are the ones who participate the most in this process.

But we live in a country where domestic work is one of the main sources of livelihood for our sisters, because we live in the countryside, but most of them work in the city. And what do we propose? That this work is legally recognized by the Dominican state; that domestic workers are covered by health insurance; that they have access to a number of demands women workers from different parts of the world already have under their laws, but our sisters don’t.

What I am telling you is the struggle of thousands and thousands of sisters who are in these organizations, including federations, cooperatives, local associations that also organize at the national level. The National Peasant Platform brings together 21 federations and has presence in 26 of the 32 provinces of the country. The number of women in these organizations and associations is quite large. Young women are there, innovating, supporting, making contributions, integrating all processes, and renewing structures, both at the regional and national level.

Recently we have been working on joining organizing efforts between the countryside and the city. Youth groups, like you said, are moving to the city to study or work. What we have been doing is organizing a structure between rural and urban areas, in a process of observation and examination. We are putting in practice this campaign that the CLOC-Vía Campesina has been carrying out, which is “Back to the Countryside”—that is, we propose actions to these boys and girls so that they can integrate in their communities and continue with production, integration, and family participation patterns.

We have bonds with agroecological education schools. We have people who have graduated from the Latin American School of Agroecology [Escola Latino-Americana de Agroecologia—ELAA], and people who have graduated in Nicaragua and Iximulew [Guatemala]. These young people have driven our youth in the communities, sharing what they have learned and posing the question of how to take forward a process of integration and participation within the communities.

In the context of the pandemic, we have established great bonds with youth organizations from the city, which organized points of sale for product kits. Every year, we organize a youth camp where boys and girls from the city go to the countryside and, for four or five days, they live with families, with peasants. We have educational exchange programs and cultural festivals where young people from the cities bring bands, artists, songs, and graffiti art about the environment and climate change, organize video pieces and a number of tools and materials. Boys and girls from the countryside, in turn, can share their production, food, and the customs we have in the countryside.

In recent times, the food structure and the very integration of families have changed. Social media and all this use of networking sites have also somewhat changed the culture, and doing this makes reintegration possible. Gender is a matter that is across all this process. We understand that women and youth are a pillar to be integrated, to be part of the change we fight for.

Building popular peasant feminism is a long process, and you have been proposing it for several years, through many political processes. What are the challenges posed to building it today?

Popular peasant feminism remains a great challenge. We talk about the possibility of increasing integration from the countryside because, in the city, it is easier for sisters or they have more possibilities, maybe because they are connected to some institutions. For us, in the countryside, it is more complex.

Qualification opportunities, political education schools, the tools we build together—that is, the textbooks, the documents, the position papers, the advocacy actions—, it took us a lot to achieve all that. We cannot say this is a finished process, because every day new elements emerge and we have to work on them, such as what happened with Covid-19, for example. We, as women, have been most severely affected, because of the role we have to play in our families. During lockdown and when caring for our families, women have to be there, as the heads of the process. We continue to strengthen the idea that this is a matter of equality, a matter of sharing.

Popular peasant feminism has helped us understand that, inside the structures of participation and coordination, in the contexts they present themselves—in addition to Covid-19, there is war and criminalization—, we can be there with the positions, discussions, and voices that are part of the processes we have been working on. I will give you an example from my country: the first land distribution law was created in 1951, and it set distribution for men only. We were not included. But we have empowered ourselves and, in that same law, we were able to create a resolution according to which we are considered and land is regarded as a family property. The same thing happens with Indigenous women, which are marginalized in their territories, as well as Black sisters, like ourselves, who experience racism, and also trans people.

Popular peasant feminism has been collectively built by our sisters. And comrades also take part in it, because we have political structures where this has been discussed and it has been defined with the arguments and propositions of our sisters, which now continue to be our pillars and demands in our struggles in each of our territories.

We continue to build on topics such as care, the visibility of domestic work, and the defense of land and resources, which has cost the lives of sisters like Berta Cáceres and others.

We say that we cannot be alone on our path. How is it possible that we have achieved rights for peasants now? This was only possible through joint organizing efforts. Defending food sovereignty in our countries and territories as the right to production, reclaiming our lands, the defense of our water, the incorporation of our native seeds—these are elements we have learned in the process. This happens as we share experiences, to have a clear view of our participation—women’s participation—in our spaces, with our families, looking back at our history, our reorganization, and the knowledge we put into practice in our cultures.

CLOC-Vía Campesina is not a tool—it is a fundamental component of all this process of political participation that has contributed to our empowerment, our exchanges, to make states and governments understand that there is a peasantry in the world and they have rights.

We say that peasants, both men and women, are fundamental in a country. How can food be produced without peasants in the countryside? How can you protect our mountains and rivers? How would it be possible to raise animals? How could we multiply and share our wisdom and knowledge, without us, peasants, in the countryside? I feel CLOC-Vía Campesina has brought back the possibility of having this value acknowledged in the city, in the world. I believe peasantry has brought acronyms, demands, pictures, and colors to life on our banner, which is a response regarding what we really are. I believe that this is an exchange of wisdom, of actions, demands, achievements, and struggles.

CLOC-Vía Campesina is a political response channeled through this human part that we are, as peasants. You can see that on our common agenda. I can visit a country far away from mine and meet a peasant just like me. What is the first thing they appreciate? Land, production, food, the protection of the environment, the possibility of counting on such a precious good as water.