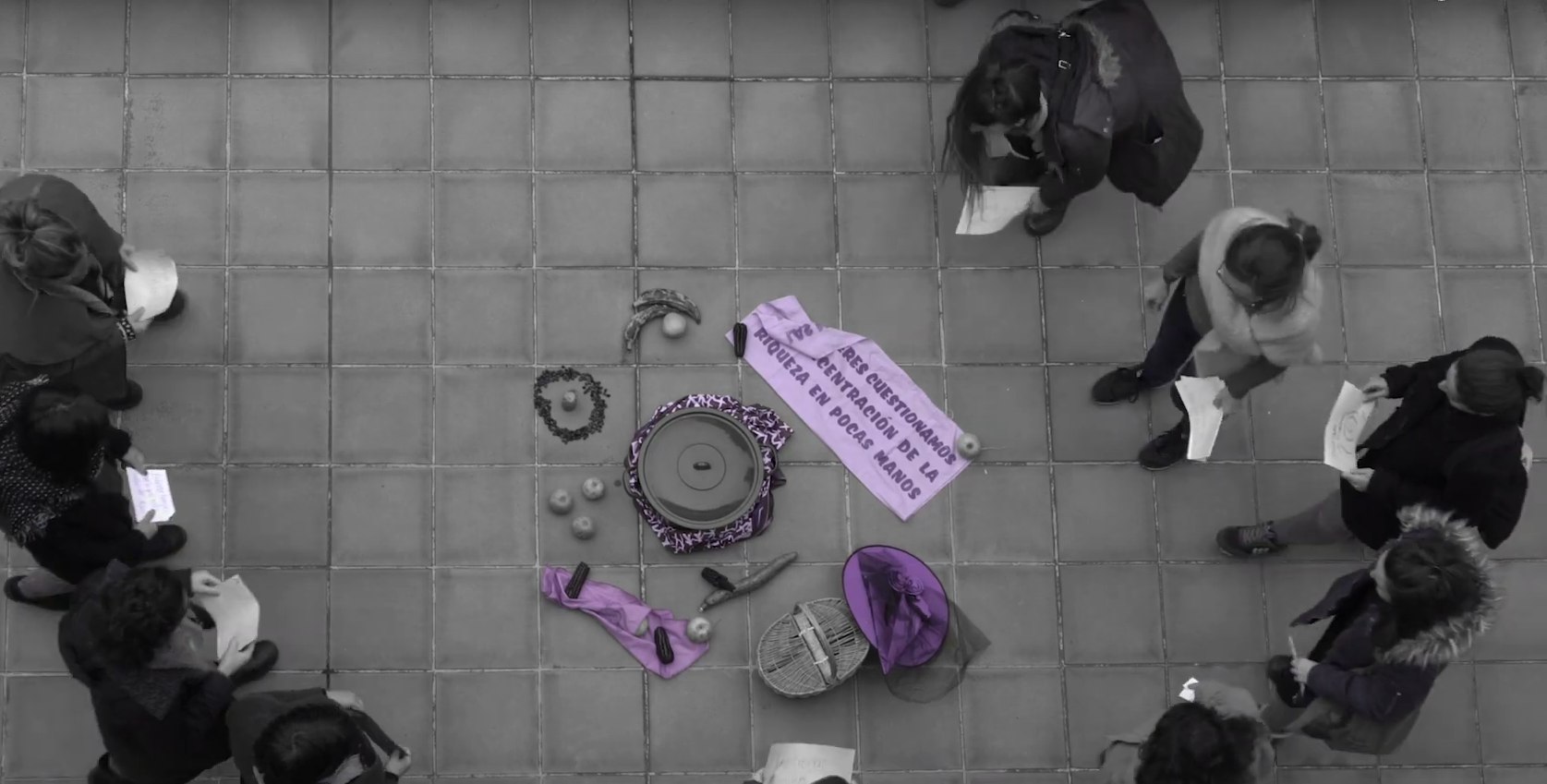 Care? A Word Under Political Dispute

The subject of care is at the center of recent feminist strikes in different parts of the world. We are talking about retrieving, defending, and taking care of the body-land territory [Cuerpo-Tierra] and the network of life [Red de la Vida]. On the other hand, the National Care System was the subject of discussions in the 2022 Expansion Women Economic Forum, funded by Coca-Cola Mexico, among others. Are we talking about the same thing?

While two decades ago the word care was rarely used, today it has become a field of deep political dispute. So, we need to ask ourselves what we are talking about when we use this word. One could write a doctoral thesis (a really long one!) or some self-managed seminars (very long, too!) to discuss this theme. Here we show just a small part of a much larger picture and propose these reflections to help in the political struggle.

We discuss the theme of care in the feminisms that go against the system (anti-capitalist, anti-racist, environmentalist feminism…) following two complementary lines. On one side, we talk of care (work) to refer to invisibilized work — those types of work performed at no cost or under very precarious conditions; work that has historically been under the responsibility of women, unequally distributed between us and which is essential to sustain life within a system that attacks life. The concept of care is connected to the concepts of household and reproductive labor.

Care is the flip side of the capitalist socioeconomic system. It is not only about cooking, washing, or taking care of a baby. Caring may also be farming to provide food; taking water or firewood; cleaning a polluted river, or fixing the leaking roof of a house. Care is not limited to tasks typical of white, urban, and middle-class housewives. Care is everything we need for life to continue and that is not provided by the market or the state. It is the work that guarantees continuity of the network of life and conducted on this side of the market, which is closer to life.

Based on this approach to care, we denounce that, within the hegemonic model of maldevelopment¹, it is not considered a collective responsibility. Why? Because this model prioritizes the process of capital accumulation, the same model that treats life as a commodity and exploits it for the benefit of the model itself. In this Scandalous Thing (that is, in the heteropatriarchal, neocolonial and ecocidal capitalism), care is invisible because, if we notice it, we start asking troubling questions: why care of common life is not a priority? Why do we have an economic system that, instead of sustaining life, attacks it?

Care must remain invisible so the capital-life conflict is not unveiled. Capitalism is a system that allows accumulation of private benefits by plundering the collective life and the planet life. But, with no life, there is no capitalism as well. Heteropatriarchy and neocolonialism guarantee the existence of employments and hidden economic spheres that keep life under siege… with no protest.  When women abide by the heteropatriarchal order of anything for love, we are hiding the conflict. When men keep taking advantage of the privilege of not caring, they are acting as accomplices of the capital. When we pay low prices for the time of life of a migrant or racialized woman for her to do what we rather not to live better, we are providing a global dimension to the capital-life conflict.

On the other hand, building the political struggle based on care means to disclose the deep perversion of the system and struggle for a decisive disruption.

As our sisters who are household workers and care workers say: the world does not move without us. We claim to end this condition in which we move the world by ourselves; we claim to no longer move it at the cost of our lives. But, above else, as we know we are the basis, we know we can turn this world upside down.

The second way of addressing care is pointing out that everybody, on a daily basis, needs care. Because of care, we perceive ourselves and each other in terms of community and body-land territory, disrupting the white and male view of individuality and meritocracy. Caring means rebuilding physical and emotional well-being. The market, the institutions, and the male view take life for granted; they just assume they are entitled to use it: to be exploited, put at the service of development, or sacrificed for revolution.

However, from the feminist point of view, we know that life does not emerge out of nothing; it does not exist by chance, let alone by divine intervention. Some learned it from COVID-19; we already knew it long before; we have always known it: life must be weaved every day. And the only way to achieve this is collectively and on a planet that shelters us: we are part of a living fabric. We are interdependent and ecodependent. This deep awareness of the network of life allows us to denounce that these links are now corrupted. The care we receive from the earth, we have given back in the form of plunder and destruction. We have perverted the network of interdependence, turning it into a network of inequalities: those who take more care of others receive the least care, and vice-versa.

Care is provided through asymmetric flows from women to men, from grassroots classes to rich classes, from the Global South to the Global North, from the countryside to the cities, from racialized populations to white populations…

Based on that, we say that care is the horizon: a bet in favor of good coexistence [buen convivir]; of the community connections that sustain us; of other economic systems in which all lives in their diversity matter. Care is a daily and persistent commitment that allows us to change the cry free our nation or die into a new call of rebel to live. It means an ethical and political position as from which we want to live and, being alive, we fight [vivas nos queremos, vivas nos luchamos]. But care is also putrefaction: this maze of unequal relationships that sustains the world we want to change; the swamp of violence where stigmatized elderly or people with disabilities are dependent; the toxic space where men seem to be free from caring responsibilities (they do not assume the responsibility for caring nor recognize the care they receive; as Antonella Picchio says, the most tiring work for women is supporting men’s fragilities so they may keep believing they are strong); the territory of the ethics of the neocolonial and classist servitude.

Care is deeply connected to gender inequalities. But it is not only a women’s problem. We demand the historical (and unequal) presence of women be acknowledged. Not to praise the good mother and the good wife, but to rebel against this sacrificed femininity. And we denounce the capitalist markets, the public institutions, and the historical absence of men. We demand their presence… but this presence requires a radical reconstruction.

Demanding men’s presence does not mean to celebrate the responsible fatherhood, but to compel a deep review of the hegemonic masculinity connected to violence, appropriation of women’s bodies and lives, and denial of care. Making demands on capitalist corporations means making it clear that care may not be a market niche.

We struggle to make the children and elderly care services that have been privatized to be public again, and to disrupt the creation of new market niches (such as those of companies outsourcing paid household work or collaborative platforms). And we tie this struggle to the struggle against (neo-)extractivism and privatization of common assets. Assigning responsibility to companies means making them pay for the reproduction of life from which they profit (paying through taxes, labor rights, measures that favor conciliation, through social-security contributions). Making demands on the state is using the welfare state mechanisms to disrupt the welfare state itself. The care systems that have been in discussion have increasingly become a public policy mechanism we may use (depending on the characteristics of each territory), but always to surpass the liberal states at the service of corporate power; to democratize and decentralize public institutions (bringing them closer to the community, the municipalities, and the location, and not the centralized and authoritarian power); to advance in terms of collective rights, leaving behind the logics of individual rights, where care has no place as part of the network of shared life.

Care, the flip side of the Scandalous Thing, is the glue that keeps our independent lives together and anchors them in the living earth; care is the core of the ecofeminist and anti-racist criticism of this Scandalous Thing. Care is the most daily, concrete aspect of all; something to which we are committed and from which we may revolutionize the system by rebuilding life every day.

¹ We call it maldevelopment because the economic development model imposed by the system is unsustainable in ecological terms; unattainable because it is never enough; and unfair because it is based on a complex network of class, gender, race, global inequalities, among others. The perversity of this model is particularly noticeable when we think of extractivism. Opposing to this model, based on the feminisms, our claim is for the good living.