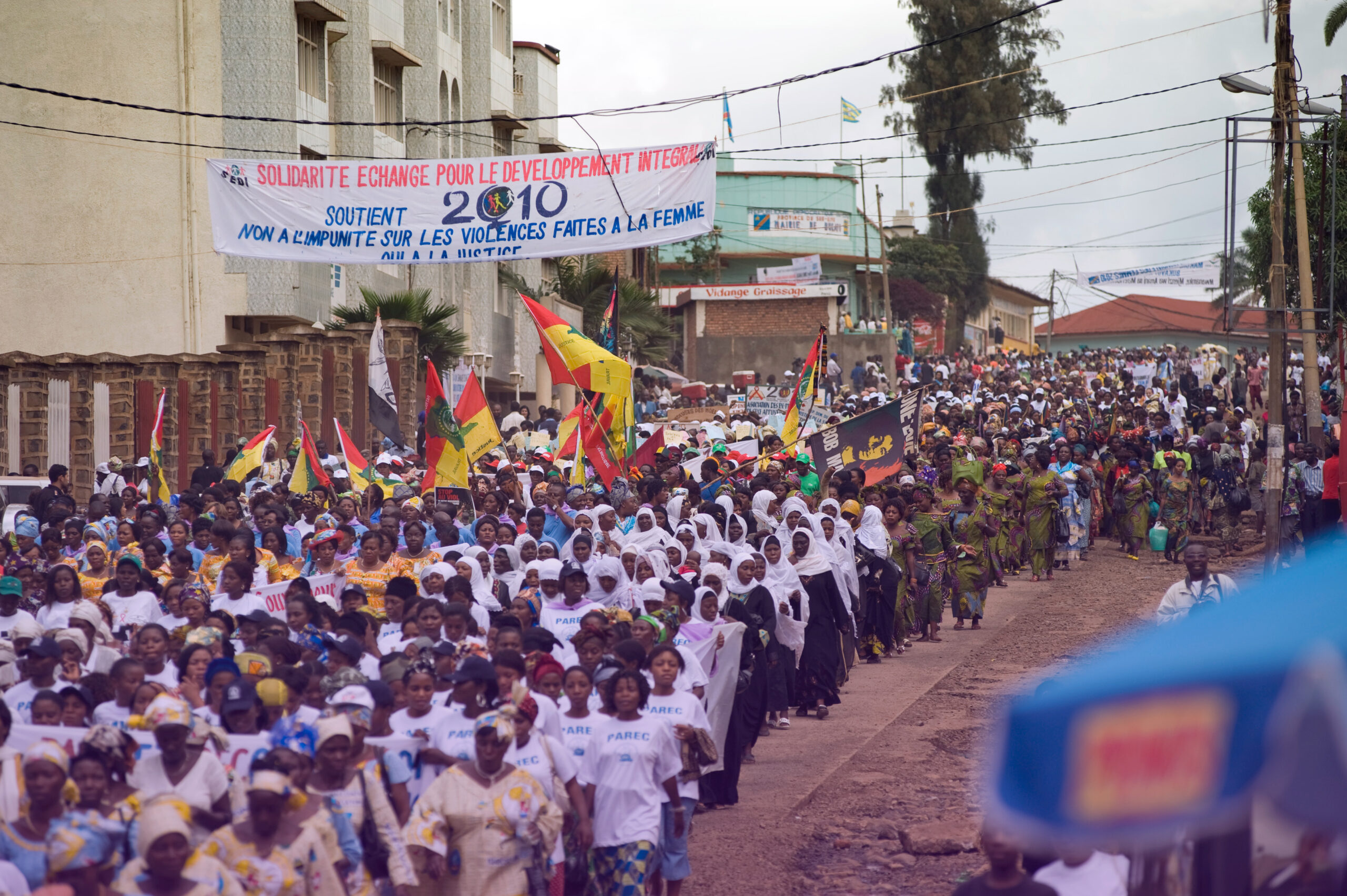 The solidarity experience of grassroots movements to fight violence and authoritarianism around the world.

Internationalist solidarity is part of a political commitment to support struggles against oppression anywhere in the world, as if they were our own. They are struggles that strengthen the self-determination of the peoples as protagonists of their own history, and they engage collective political subjects who pledge to organize to promote systemic change in our societies. In the experience of La Via Campesina, the World March of Women, and Friends of the Earth International, internationalist solidarity is a fundamental political practice.

Practicing solidarity out from social movements means coordinating actions to demand justice and advocate for the sovereignty of the peoples and their grassroots political projects for emancipation and self-determination. It means organizing to raise our voices, to denounce imperialism, authoritarianism, and violence, and to effectively support those whose lives and communities are threatened and persecuted, who have their rights violated and their struggles criminalized. If a people anywhere in the world suffers an injustice, then there is a struggle to be carried on by all peoples in the world.

All around the globe, the history of the peoples is the history of the struggle against domination. In communities, women spearhead the struggle to defend their land, water, decent work, and collective organization. This is in defiance of the powers that be: transnational corporations and their projects to hijack nature; the walls and borders that segregate peoples and militarize territories; reactionary governments interested in dismantling democracies. In times when an increasingly authoritarian version of capitalism advances, defending those who defend life is crucial for the process of grassroots resistance and social change.

The solidarity processes of social movements emerge from the need to produce an international response to the attacks against sovereignty and to the systematic violations of the rights of communities and social fighters. By sharing these struggles and making them known, assembling resistance with ally organizations, and organizing brigades and vigils, these organizations make solidarity a political practice: horizontal class solidarity.

In order to write this text, we spoke with Nalu Faria and Miriam Nobre, of the World March of Women; Karin Nansen, of Friends of the Earth International; and Tchenna Maso, of La Via Campesina. These social movements have accumulated so many experiences in solidarity throughout time. This way a network is created, capable of protecting people while also exposing conflicts. In 2020, more than 300 social leaders and former FARC fighters have been murdered in Colombia, which has led this life protection mechanism to be revived.

Solidarity is a principle underlying the building of the World March of Women. One of the strategies of the movement is to identify similar demands in different countries marked by police brutality, strengthening international pressure and the integration between struggles. As a result, in 2005, the 2nd International Action of the WMW sewed a Solidarity Quilt which then traveled the world. The quilt was a token, but also a way to demonstrate the encounter of women from around the globe.

The Action ended in Burkina Faso, a country where the independence process and a women workers’ strike have gained a lot of exposure thanks to internationalist solidarity actions. Also, every year since 2013, April 24th is celebrated as an international day of feminist solidarity against transnational corporations, in memory of the more than one thousand women workers who died in the Rana Plaza collapse in Bangladesh. Solidarity comes together with the denouncement of the precarious labor conditions provided by big transnational corporations.

Since the 2008 crisis, the world has witnessed the strengthening of conservative ideologies, which have taken on a peculiar neofascist, authoritarian character. As these right-wing forces rise to power, they foster political instability and actively dismantle or erode democracies. Meanwhile, the ongoing development and expansion of the neoliberal economic system has intensified the privatization, commodification, and financialization of common public goods around the world. Moreover, imperialism has restored its offensive against people’s sovereignty in countries such as Cuba and Venezuela.

Via Campesina is part of an articulation called “Solidarity, Resistance, Hope”, a mechanism with the participation of, so far, 16 organizations and social movements, including WMW and FoEI. Examples of this work include the Colombia peace process and also the defense of the Palestinian territory, a symbolic resistance in a territory that the Israeli occupation and its allies insist to claim doesn’t exist. An intense vigil is then organized to make sure the peoples and leaders who are constantly threatened with arbitrary imprisonment and all kinds of violence can be safe and sovereign.

The Internationalist Solidarity System of Friends of the Earth works with a decentralized team that operates on local/domestic, regional, or international levels. Based on regional focal points (in four regions: Latin America, Europe, Africa, and Asia-Pacific) and the international secretariat of the Federation, it organizes political education, documentation, and assessment of threats. Practicing solidarity is about creating effective paths in the world that we live today toward the world that we want to build. This is why the mechanisms of fast action are not detached from political mobilization and organizing. Conversely, they strengthen each other.

And so, campaigns for the right to struggle also build the struggles themselves, and vice-versa. And from these calls by the organizations, they build and strengthen strategic alliances, like the one between these three movements.

Some of the toughest, most necessary experiences of solidarity are those that demand the release of militants who are incarcerated for political reasons. First, the actions start by disclosing information about the cases and, from that, by mobilizing legal counseling and making sure comrades are guaranteed basic safety and protection in prison. One example was the episode in the Democratic Republic of the Congo a few days prior to the closing of the 3rd International Action of the WMW in 2010. These are arbitrary arrests, as are all political incarcerations. And this is a growing reality in all regions, especially in territories of conflict. Every case where someone is persecuted and criminalized requires a different answer and strategy of exposure, depending on its political, social, and legal context, as well as on the way things may escalate in the daily lives of local communities.

For La Via Campesina, this continuous monitoring of militants who are political prisoners is called the Alert System. The system includes a number of measures to monitor the risk of imprisonment, persecution, or even murder that a militant or a group of militants faces in their territories. Organizing this monitoring is a difficult task, which becomes more and more complex with the growing surveillance and digital data under big tech control.

In face of authoritarian offensives and the corporate capture of democracy that strangle processes of grassroots resistance, political education and grassroots internationalism converge as a permanent strategy for these three organizations. This way, they expand political and class awareness, building on the understanding and tackling of the structural causes of violations. The convergence of communications between social movements—which counter the silence of mainstream corporate media when it comes to resistance—and Political Education Schools—like the Feminist School, the Florestan Fernandes National School, and the Sustainability Schools—are also key strategies for internationalist solidarity.

These joint efforts for solidarity aim to guarantee survival, freedom, and protection of rights, but that is not all. They expand the ability of grassroots movements to build alternatives and new emancipatory political realities. Solidarity means standing up and mobilizing and organizing against all forms of oppression, such as patriarchy, racism, colonialism, and the brutality committed against our peoples to try to take away from us our ability to organize and struggle.

Our movements have a long history and experience, with practices, methodologies, and political accumulation in building internationalist solidarity. But that is not enough, as the policy of criminalization and death is widespread and advances wherever people dare to organize their ways of living in a sovereign way and stand up to say ‘no’ to the offensive of capital. This text is an invitation and a call to action for effective, internationalist, feminist, and grassroots solidarity.