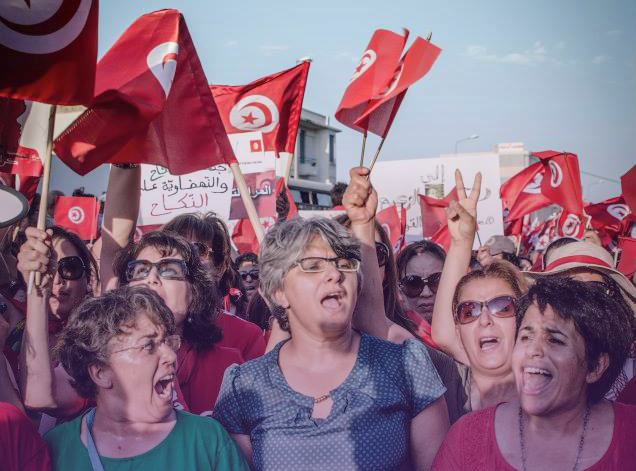 The Challenges of Grassroots Feminism in Arab Countries

Ten years after the “Arab spring,” Souad Mahmoud reflects on women’s living conditions and struggle as they face conservatism and instrumentalization.

We must acknowledge that the voluntaristic logic of development in different Arab countries, which has been around for decades, although to varying degrees, has made it possible to palpably improve women’s situation. Women’s access to education and jobs, combined with urbanization and better standards of living, especially in urban areas, has contributed to promote it, but more generally, it also contributed to social change, including increasing marriage age, reducing birth rates, the nuclearization of families, etc. Women have emerged as key actors of development and as a factor of social change, even though these dynamics are continuously challenged by conservative social norms and rules.

One of the driving forces behind the recent uprisings in North Africa and the Middle East has been and continues to be the desire to access full citizenship. This pursuit of citizenship encompasses a number of demands that cannot be separated from the oppression experienced by these populations. Women have massively taken part in these popular uprisings, although not all of them were necessarily feminists—far from it! Like in the Tunisian or Egyptian “dégage!” or the February 20 Movement in Morocco,[1] these demonstrations can be explained, first of all, due to precarious socioeconomic conditions (especially poverty and unemployment) and political conditions (lack of public liberties), two fundamental dimensions of citizenship.

Another explanation is that the determining element of these mobilizing forces is, first and foremost, its transformation into a struggle for dignity. In this perspective, the more this goal with a strong emotional charge intensifies, the broader the mobilization is likely to be, because everyone is likely to find each other amidst demands. As dignity goes hand in hand with the democratic ideals of freedom and equal rights, it is not surprising that feminist activists and “ordinary” women have taken the opportunity to denounce the discrimination against them, illustrating the social oppression and lack of equality they experience through the energy with which they plunge into the political battle.

Except for some achievements in certain States (such as equality, which appears on paper in the new Constitution of Tunisia and Morocco), the so-called “Arab uprisings” did not fulfill their promises, especially the ones regarding a new balance of power relations between men and women. In fact, even at the height of the protests, most of these uprisings remain blind to gender inequality and violence against women. What is even more serious is that several of them have become the stage for sexual violence. But even before that, we found it important to focus on the phenomenon of the instrumentalization of working women, both in secular and religious circles, while the gap between the right to equality and its application in real life has not stopped widening.

Moreover, the reforms that are being brought about are facing conflicting situations: the duality of legal norms—which are in part religiously inspired—and modern family codes, which again represent the gap between the legal systems and social reality and also lead women to have a two-fold legal status, depending on whether they are considered in their public or private life.

The fact that parties with religious references are holding power in a large number of countries challenges the relationship between women and democracy. Not only that, in the current context of globalization, political regimes in this part of the world are trying to make “promises” to international donors and public opinion to show that they mean well, changing certain policies related to topics that are now popular at the international level. This way, by addressing women’s conditions, these States are able to position themselves in terms of the international implementation of human rights, so that they may present themselves as “modern” regimes. That same argument makes gender equality a necessary condition for development and the good operation of political and economic systems, a condition that is constantly reassured on publications by several international institutions (like the World Bank Report).

Ten years later, the results are far from satisfactory. Inequalities remain striking when it comes to political representation, access to resources, and decent work, while poverty affects particularly women from working classes (in urban, semi-urban, or rural areas). As women, we are convinced that decisions are made without us or excluding us. We continue to organize and resist, and we set off changes in favor of women and social movements.

While the “spring” was not particularly feminist, with massive participation, we, women, have forced it to raise the question of citizenship so that men are not the only ones to benefit from its potential achievements. Every day, we reinterpret traditions to create new margins and spaces of freedom, influence, and power, assuring every day our place in public spaces, where we have always been, despite restrictions. This place is built through “little transgressions” that allow us to take spaces of freedom. We move through the city, we produce, we negotiate, we resist, we empower ourselves, and we frustrate relations of domination. We are not willing to yield. We reject the violence that costs our lives, we highlight our resistance and mobilize the national and international public opinion. Our awareness of inequality is forged through mass participation in interactive workshops and through the work with families to change the established order and to make us full citizens.

The regimes usually manipulate “the woman question” to serve multiple interests that ultimately have little to do with women themselves. On the other hand, women in the MENA (Middle East and North Africa) are mobilizing ourselves to have our right to full, inclusive citizenship enforced. However, as the experiences of emancipation regarding the many forms of patriarchal or State guardianship vary according to social relationships in terms of gender, class, and religion in particular, we all demand gender justice to be able to access urban spaces and fight violence, and also to get our fair share of resources in terms of inheritance, property ownership, child care, and the control over our own bodies.

In addition to challenging the overall patriarchal structure that supports the violence against women, can we consider that these violences essentially limit women’s political participation? That’s the case in Libya, where there is a significant gap between the will to tackle domestic violence and actual reality. Institutional and public violence experienced in the country are in general a major reason for women’s unsafety and a barrier to their access to public matters. The participation of grassroots women activists demonstrates the major contribution of feminists to the struggles for women’s citizenship in societies. Even though they are only highlighted in times when the anger of social movements bursts, these are also everyday struggles in societies where women’s achievements are constantly challenged, both in legal texts and social practices.

These factors at the national level, such as women’s access to education, qualification, work, and family planning, as well as relative freedom of expression, are combined with international factors, such as programs that are the result of world conferences on women. In Arab countries, all this leads to the emergence of an important associative network of women who are breaking with official organizations and bringing back demands for emancipation and equal rights. These associations come from vanguard leftist women, especially those who have been to prison since the time of Tunisian president Habib Bourguiba and generations after him, often women who were already engaged with parties or labor unions.

Women’s legal rights in the Arab and Muslim world are essentially the crystallization of the struggles against conservatism. Regardless of specific aspects of the political, economic, and social history of each Maghreb country, the trends in terms of women’s labor are similar. The demographic transition, the access to education and qualification (currently there are more young women than young men in secondary and higher education), and the evolution of social representation of working women have certainly led to an evolution in terms of their presence in the labor world. However, this dynamic is frustrated as paid and stable jobs tend to decline, vulnerable and informal employment increases, and unemployment and poverty grow. Although the struggle to end gender-based discrimination is rarely considered a top priority, in Palestine, for example, women’s struggles are intertwined with the struggle for independence—and that’s a political win for all of us.

[1] The slogan “dégage!” (which means “out!” or “leave!”) emerged in Tunisia and became a common token on signs, at demonstrations, and as part of demands during the so-called “Arab spring” in different countries—even in Egypt, where English is more commonly spoken. The motto “dégage” was used differently in different places according to their specific demands. In Morocco, for instance, in 2011, the February 20 Movement, which emerged in the context of these mobilizations, would call “Article 19, dégage!” demanding a constitutional reform that removed that article from the country’s Constitution, which granted the king unlimited power.

[2]  The Gordian Knot is a legend associated with the king of Phrygia, in Asia Minor, and Alexander the Great. It is often used as a metaphor for an intractable problem that may be easily solved when someone “thinks outside the box.”