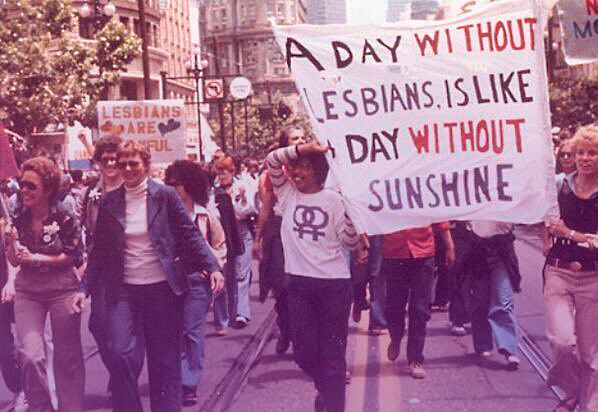 Lesbian and Bisexual Women: Our Struggle Is Bigger Than Our Silence

The LGBTQIA+ struggles against neoliberalism and conservatism are paths to autonomy and feminist social change.

In a picture taken in 1979 at the San Francisco Gay Freedom Day Parade (USA), two women carry a banner that reads “a day without lesbians is like a day without sunshine.” The phrase makes us smile for the joy of its radicality. These women seem to be saying something like: when women get to freely exercise their sexuality, the world lights up. Or, also: even if they try to hide women’s nonconforming sexualities, they are always there, as is the sunlight.

In the Southern part of the world, in Brazil, during the several editions of the São Paulo Lesbian and Bisexual Walk and in many other demonstrations, the watchword of the World March of Women feminists has two versions: “I’m a feminist, I don’t give up the freedom of my lust!” and “I’m a feminist, I don’t give up socialism and the revolution!” So, we pointed out that women’s liberation, sexuality, and the reorganization of society and the economy are not separate struggles, much the opposite: they advance better together.

Reminding these two episodes of demonstrations of lesbian and bisexual women, with their differences of space and time, also serves to state the need for keeping the memory of these struggles alive and in movement, struggles that have been facing several forms of erasure.

Until We Are All Free

Lesbian and bisexual women’s struggles are intertwined with the struggles of the feminist movement: when lesbian and bisexual women question androcentrism (men as the center of everything) in their lives, all women become stronger, in what refers to their autonomy and freedom. When the feminist movement claims that “we will march until we are free,” it includes being free from the closets, the violence, and the precariousness of life imposed by discrimination and by the heteropatriarchal norm.

Lesbian, bisexual, and trans (LBT) women have been acting in defense of life in various senses: promoting protection and care networks, fighting for justice for women who suffer police violence, denouncing the invisibility which creates opportunities for exploitation and precarious work. The world we want is free from racism, violence, from the obligation of being a mother (and, on the other hand, the discrimination against those who want to be mothers), the exploitation and control over women and their bodies, territories, and sexualities. Self-organization, confrontation with sexist and State violence, with conservatism, authoritarianism… These are some of the overlapping aspects of the grassroots feminist and gender nonconforming struggle.

In addition, LBT women are key political players in deepening, within feminism, the refusal of  compulsory heterosexuality in its various expressions. It is the refusal of heteronormative standards of beauty and behavior, of violence and of the patriarchal formation of families that makes women inferior. It is also the refusal of the taboo involving the subject of sexuality, which transforms into silence, loneliness, objectification. All these elements, even if they do not seem to be at first, are directly related to heteronormativity, that is, to the imposition of heterosexuality as a norm. Such heterosexual norm is part of the historical construction of the nuclear family, which is a pillar of racist and patriarchal capitalism. Fighting against it is, thus, opening the doors to the exercise of a free sexuality to all women, to all people.

When a standard is imposed as a form of control, the possibilities within us are reduced. Our desires, wishes, interests, and tastes are a mixture of our subjectivities and of what has been introduced to us in the world. However, the things to which we have been introduced are so restricted… How many of us are not aware of what we like and do not like precisely for this reason? What would we like or dislike if our freedom had not been hampered and those standards had not been incorporated since before we could walk?

For a Life- and Freedom-Centered World

“I’m a homophobe, and I’m proud of it,” said the sitting president of Brazil, Jair Bolsonaro, in 2013. In that same year, Vladimir Putin, president of Russia, sanctioned an act that criminalizes the spread of information and advertising on “non-traditional” sexual relationships. In 2019, the president of the Philippines, Rodrigo Duterte, stated that he underwent the “gay cure” and that he “became a man again” when he met his first wife. Also that year, the then president of the United States, Donald Trump, said in a White House press briefing that the bill for protection of diversity would “undermine parental and conscience rights.” In mid-2020, in the middle of a pandemic, Trump extinguished the health assistance for protection of LGBTQIA+ people. And, this year, in a video directed to the youth of his party, the president of Turkey, Recep Erdogan, said that they “are not the LGBT youth, not the youth who commit acts of vandalism.”

In October 2020, Bolsonaro said that “Brazil has to stop being a country of sissies.” If only it were! The political project of such conservative leaders has been turning their countries into territories of hunger, violence, over-crowded ICUs, precariousness, and hatred. It is necessary to counter this death project that threatens lives and deepens LGBTQIA-phobia.

A significant number of LGBTQIA+ people hold particularly precarious work positions. Young people, when abandoned by their families, need to start working early to provide for themselves. Many lesbian and bisexual women who do not conform to the beauty standards of femininity suffer with the difficulty of getting a job in a world where women are controlled and measured by their looks. It is estimated that 90% of the Brazilian trans women are in situations of vulnerability and prostitution¹, with no alternatives on the horizon, suffering different forms of violence every day.

In 2014, in Uganda, president Yoweri Museveni (reelected in 2021, supported by the United States and under an accusation of fraud and irregularities) passed an act that prohibits and criminalizes homosexual relationships. Homosexual practices are forbidden and punished in several countries in Africa, Asia, and Oceania—many of them, it should be highlighted, are strategic allies of the United States in maintaining wars, imperialism, and exploitation of natural resources, regardless of being Republican or Democrat governments.

The model of exploitation of labor and increasingly precarious jobs is the same that encourages state, domestic, military, and racist violence in our cities and in the countryside. It’s not Doritos with its rainbow package or Uber with its colorful app those who are on our side. According to the investigation agency Popular Information, 25 big corporations that carry out colorful marketing campaigns in June supported US congressmen who were against the LGBTQIA+ agenda with more than 10 million US dollars in 2019. Walmart is one of such corporations, and is also one of the transnationals that profited from the labor analogous to slavery that took place in the garment factory of the Rana Plaza building, in Bangladesh, which collapsed in 2013, killing more than one thousand people, most of whom were women.

Civil society organizations and floats of these and several other companies both participate in the São Paulo LGBT Pride Parade, which welcomes millions of people from across Brazil every year. It’s a moment of visibility followed by acts of LGBTQIA-phobic violence, more and more frequent every year. Such a political event has become an intense opportunity for tourism and money circulation.

It should be a scandal the fact that the State of Israel takes part in the Parade with its own float, a state that is responsible for the forced displacement and separation of families, for deaths, and the destruction of houses, places of faith, culture, and history that affect the entire Palestinian people. Is the State of Israel by any chance “LGBTQIA+ friendly” with the Palestinian lesbian and bisexual women who are fighting for the self-determination of their bodies and territory? Nothing can conceal a genocidal state. This is one more piece of evidence demonstrating that our struggle for free sexuality cannot be separated from the struggle against capitalism.

Capitalist sectors also get stronger this way: usurping our symbols, trivializing our struggles. Capitalism plays in two opposite sides: sometimes, it embraces conservatism, others, a superficial image of diversity where there is no place for us, the LGBTQIA+ workers exploited by the very companies that pretend to be on our side, while we suffer violations of rights practiced by the same governments. While companies’ colorful marketing campaigns yield profits, the lives of LGBTQIA+ workers are still threatened, attacked, imprisoned in fear, and this will melt away only when we are all free.

This is why, today, the answer is a grassroots way out, with an anti-neoliberal agenda—for the freedom of people, and not that of the market imposing itself on us. The integrated struggle of the movements and in each community is important to open the horizons of the world we want, to make solidarity an everyday practice, to give voice to the people who usually find closed doors and hatred around them. In the words of the African-American lesbian poet Audre Lorde in her poem A Song for Many Movements: “our labor has become/ more important/ than our silence.”

¹Data from a survey carried out by the Brazilian Association of Travestis and Trans People [Associação Nacional de Travestis e Transexuais do Brasil (Antra)] in December 2020.

Helena Zelic is a World March of Women Brazil militant, member of the Feminist Organization Sempreviva SOF [SOF Sempreviva Organização Feminista], and poet. This an adaptated version of an article published at Brasil de Fato.