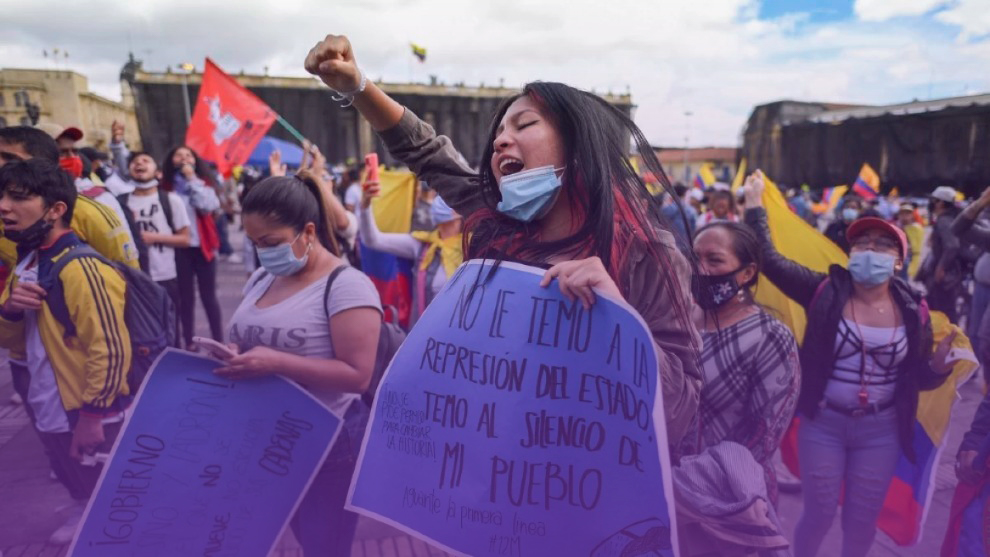 Colombia, a Sparkle Rejecting the Neoliberal Model in Latin America and the Caribbean

Mobilization, change, and unity are fundamental tasks for social movements and political forces in the region.

Saying we are facing a battle over Latin America and the Caribbean has never seemed so true. This year, 2021, we are living a number of changes and transformations that are now filling the emancipatory future of our continent with hope. This process validates the fight against the neoliberal model as a condition to defend humanity and the planet, especially considering the crisis, aggravated by the pandemic, which our countries have been suffering for more than 30 years—the pandemic of inequality.

In the late 20th century and early 21th century in Latin America and the Caribbean, we have been experiencing neoliberal attacks on the one hand, but also the uproar of our possible futures on the other. From the emergence of a continental movement of sovereignty and independence spearheaded by Commander Hugo Chávez, taking the imperishable example of the Cuban Revolution led by Fidel Castro, we have ultimately established the Bolivarian Alliance for the Peoples of Our America [Alianza Bolivariana para los Pueblos de Nuestra América – ALBA] as a Bolivarian platform of states and, later, movements. Following this sovereignty project for Nuestra America was the emergence of alternative governments that aimed to develop different projects, opposing neoliberalism and the aggravation of inequality in the capitalist system.

The reactivation of anti-neoliberal mobilizations is the heart of this hope. Different economic and health measures have definitely hit the poor, most neglected sectors of the continent. States have been emptied out and don’t have the capacity to manage a health emergency with the characteristics of the current one. As an increasingly small group becomes richer by filing their coffers at the expense of the majority who endures increasing poverty and exclusion, this puts a focus on how insufficient the neoliberal model is. Neoliberalism has foolishly tried to offer false possibilities of future through consumption and individual effort, as an attempt to go without the state and social and collective organizing.

We are experiencing the resurgence of leaders of a right wing that, over the course of years, has radicalized their rhetoric and politics, pushing the boundaries of politics to absurdity and making speeches that we believed were defeated and impossible to be repeated. Xenophobia, racism, misogyny, and homophobia have become common currency in this neoconservative political culture. They implement imperialist measures from old and new times, such as lawfare[1], hybrid wars, and coups, creating immense tensions at a continental level to this day. This is a battle for the continental future we want for the peoples and the large majorities, in face of the interests of imperialists and their satellites in our region.

As of 2019, the peoples of Latin America and the Caribbean have massively risen up to fight this scenario and pledge for a future to build. So this time, the counties that had not taken part in that early movement to cement a new era of regional unity are now taking the lead. Colombia, Peru, and Chile, which are now rising up, have been the primary allies of the United States in the region, implementing neoliberal export models the right wings in the continent envy and defend, pointing out their need to “look like them.” Their alleged economic successes are nothing more than a bubble shouldered by increasingly precarious working classes, and it’s now about to burst.

In Colombia’s case, massive mobilizations have erupted since 2019 against the Uribista[2] Iván Duque administration. By continuing to push a neoliberal model and maintain a conflict such as the Colombian one, Duque has aggravated the conditions of inequality and violence that the country has endured for decades.

We underscore that Duque’s administration has promoted an appalling increase in political violence against thousands of social leaders in the country. The involvement of paramilitary forces and their collusion with the Armed Forces of the state have developed an extermination policy against anyone who has some kind of political representation on the ground and advocates for the rights of the communities.

The 2016 Peace Agreement between the Colombian state and the now-defunct Revolutionary Armed Forces of Colombia – People’s Army [Fuerzas Armadas Revolucionarias de Colombia—Ejército del Pueblo – FARC–EP] has a number of tools to expand democracy in the country and promote the access of peasant communities to rights they have been historically denied, but the state now refuses to implement the agreement. Since the deal was signed, political violence has overwhelmingly increased: more than 1800 people have been reportedly murdered for political reasons in the country since 2016. This situation becomes even graver as armed perpetrators are left unpunished and state agents not only fail to take action, but, instead of conducting investigations and eventually convicting the culprits, they conduct smear campaigns against social leaders to justify their assassination.

Adding to this humanitarian crisis is the sheer number of victims of police brutality, as hundreds have been killed or injured. Amid numerous demonstrations held since 2019, state forces have cracked down on demonstrators with war weapons and training. During the latest general strike, which started on April 28th, 2021, more than 4,800 cases of police brutality have been committed by the Colombian state, including around 70 people killed by police forces during mobilizations or as a result of later persecution.

Several demonstrations organized and self-managed by the Colombian people have led to mobilizations demanding change in economic policies and tax bills proposed by the Duque administration. These demands add to the fact that people are tired of the high level of political violence they face in the country, where the murder of social leaders and politics became part of the landscape. Then a general strike took place for more than two months, including all these aspects of rejecting the Duque administrations and his predecessors and demanding profound changes in the country’s political structure toward putting life first.

Numerous human rights violations have been committed, which the Colombian state consistently denies, despite the hundreds of reports by NGOs from the country and international observation missions. Even the Inter-American Commission on Human Rights produced a report denouncing these episodes.

The violent response of the Iván Duque administration perfectly translates the Uribista approach to politics, which has ruled the country for 20 consecutive years: denial, elimination, and extermination of any sector, social organization, or leader who opposes a neoliberal model deeply aggravated through war.

The deafening silence of international organizations is remarkable, especially of the Organization of American States (OAS). These organizations have not taken a stand about what happened in Colombia during the months of strike in particular, nor about the severe humanitarian crisis of political persecution and human rights violations.

However, despite this critical situation, the Colombian people continues to mobilize and build numerous alternatives in the battle for the future of the country, on both the streets and the ballots. Right now, there is a Historic Pact being developed, a plural coalition that aims to build, through the unity between numerous political expressions, a possibility for Colombia outside the burden of the Uribista political project and US interests in our country. This means forming alliances both on a social and political-electoral level, as the race for president and parliament will take place in 2022.

Latin America and the Caribbean are experiencing a moment of hope in and renovation for their emancipatory future at a regional level. Not only through the huge demonstrations that happened in recent years, but also through some changes in the continental political map. This is demonstrated as the grassroots administration of Pedro Castillo and Perú Libre took office in Peru; Bolivia saw the return of democracy after the 2019 coup orchestrated by the OAS and the United States; Chile successfully established a Constitutional Assembly; Venezuela and Cuba resist despite the unremitting sieges perpetrated by imperialism; and mobilizations continue to grow against neoliberal and neofascist governements in the region, such as Brazil.

On the path toward consolidating this continental project, joining forces is fundamental to steer the strategy of regional unity and sovereignty against the interests of US imperialism. In their battle for hegemony in face of the rise of China and the crisis of their global role, the United States is trying to make sure Latin America and the Caribbean continue to be its “backyard,” as we have been called throughout history. As we face this, we must prioritize unity between our peoples through the regional tools we have built, such as ALBA and the Community of Latin American and Caribbean States [Comunidad de Estados Latinoamericanos y Caribeños – CELAC]. Paraphrasing the hero of Cuban independence: our enemy obeys this imperial plan, but Our America obeys the plan of integration and unity between the peoples. Plan versus plan.

[1] Lawfare is a portmanteau of the words law and warfare, meaning the use of the legal maneuvering as a weapon.

[2] “Uribista” and “Uribismo” are terms related to the political alignment with Álvaro Uribe, former president of Colombia in 2002-2010.

Laura Capote is a militant of the Patriotic March [Marcha Patriótica]in Colombia and a member of the Political Education Office of ALBA Movements.