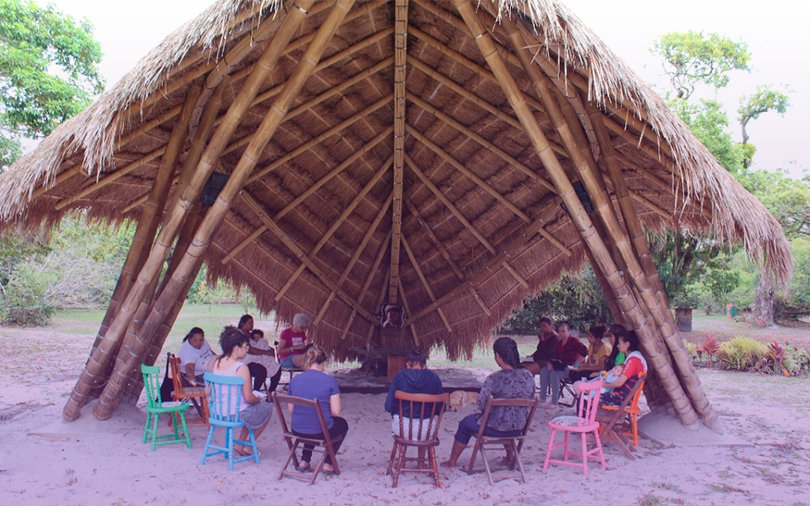 To talk about the relationship between body and territory, we start by looking at how this capitalist, colonialist, racist, patriarchal order is imposed on us. Thinking of that, we now recollect an idea formulated by Angela Davis in the United States about how economy is structured and organized by the model of monoculture plantation. Grada Kilomba uses this same idea to reflect on how our subjectivity has been structured. Here in Brazil, we can use this same reference to talk about the structure and organization around which labor and economy organize.

This is about land enclosure, genocide of the Indigenous peoples, appropriation of their lands, and establishment of a production system with such a violent level of exploitation of the labor force that it has been based on kidnapping.

Many people from recent generations tell that their grandmothers were snared, captured by force. This biopolitics of capital was established by using women’s bodies with extreme aggressiveness, creating in our country an international, sexual, and racial division of labor that persists to date.

Fighting Capitalism and Naturalization of Exploitation

Our first challenge is to deconstruct the view that the ways of colonialist capitalism are natural. We need to show people that this order is not natural; it only reflects political choices of specific groups.  In addition, we want to provide new meaning to nature, learning from the knowledge of traditional communities who embody the conception that we are nature.

If, on one side, we have this task of “deconstructing naturalization”, on the other, we want to acknowledge views of nature and relationship with territories and with the bodies that support forms of resistance. By learning from them, we will be able to reconnect body and territory, at the same time supporting our resistance struggle.

The idea of territory in Quilombola, Indigenous, and rural Afro-descendant communities goes beyond and contradicts the idea of private property. Communities see territories as organizations not subject to enclosure. In this view, territories are paths. Communities are always moving through the territories. Seeds and plants as well move through territories, being thus alive. This is why the idea of enclosure, whether through transgenes or seed banks, can never comprise the potentialities of life movements.

In conversations with these communities, we can notice that the conception of territory based on the logic of enclosures causes conflicts. Indigenous and Quilombola communities share paths. When it is necessary to delimit Indigenous territories and Quilombola territories, the legal view that sustains private property usually cannot understand the common areas.

Quilombola women perceive the territory not only as the paths they make, but also as paths made by the waters. The paths of the water organize the territory and define women’s view on it. That is why it is shocking for them when the State draws a straight line and determines that line as the territory limit. Similarly, they organize spatial labor distribution considering springs of water. So, for them, when water dries out, it does not only mean that they are running out of a resource, but also that their territory is losing its life.

Another strong example here in Brazil is that of women who work breaking babassu coconut, thus living off extractivism. This kind of extractivism, however, is different from that of the capitalist model; much to the contrary, this economic activity is based on coexistence with nature and it questions the idea of scarcity. It also challenges the idea that living off nature is synonymous with living in scarcity — such scarcity which is often imposed by capitalism. It further challenges the discourse that people will have to work many hours and produce a great number of inputs in agriculture to enjoy well-being.

These women, as many women who live off foraging, whether of babassu coconut, mangaba, or many other fruits, claim their free access to babassu palm trees, questioning laws based on the concepts of enclosure and private property.

A fundamental teaching of traditional communities that helps us reflect on the conception of territory is the sense of belonging and rootedness. There is a custom in Afro-descendant communities here in Brazil according to which people bury their belly buttons in their homeland. Burying one’s belly button has a very important meaning: it symbolizes that the land is within the person, even if the person no longer lives there. A sister told me once that she moved out of a small city with her family, from the Northern region of Minas Gerais to the São Paulo megalopolis. She moved to the outskirts of the city at a time when these regions were mostly rural. There she witnessed the process of urbanization along with its inherent injustices. The urbanization process was one of artificialization and degradation of life conditions. During her vacations, she would always travel back to the Northern region of Minas Gerais. Her aunt who still lived there used to bless her and told her that she should never lose that perception of nature. With this in mind, she kept struggling against this life-destructuring process in the city. During the same workshop, there was a much younger sister who said that, for her, racism meant living in a place where there were no trees, no green, with concrete everywhere.

Writer Conceição Evaristo also tells of beautiful stories about the symbolism of the belly button. In her novels, she writes about her experience in a slum: life conditions were really precarious, but there was a sense of community and a relationship of care between neighbors. This slam was destroyed during the dictatorship, in a so-called urbanization process. A superstore was built on the plot of land where the slam was once located. When she goes back to that superstore, she says her belly button is buried there. By saying that, she struggles against the erasure of people’s memories, which are rooted in their territories.

Indigenous communities have been living processes of resumption of territories and also a resurgence of peoples such as the Guarani Kaiowá and the Tupinambás. Communities once disarticulated as a people, with an identity more connected to that of family farmers than to the identity as Indigenous peoples, start to build new meaning to their kin relationships throughout this political processes, recollecting and recognizing farming styles, ways of living life and living their time on Earth. This sense of belonging resists the erasure of memory.

Once, during an activity organized by the World March of Women in the United States, people performed a ritual in defense of an Indigenous sacred field that had been turned into a parking lot. We were at the parking lot of a shopping mall, but when those Indigenous people arrived, they turned that place into the sacred space where they once lived — where, if it were in Brazil, their belly buttons would probably be buried. This is why this process of recognition and reconnection is also part of the political and organizing process of creating and building knowledge.

Paths for Reflections on Felling, Thinking, and Resisting

We often conduct workshops to reconnect our body and our territory. We begin by proposing a reflection, through a guided meditation, on the degree of environmental degradation and attacks to the territories women have been experiencing, and on how we feel that in our bodies. Our throats get dry, our hearts plummet, and our stomachs are in knots. How do we feel?

Currently, in the name of conservation of a “no-people” nature, following the tracks of green economy, society disregards traditional communities’ relevance as protectors of the very existence of nature and biodiversity. This policy’s logic is based on the idea of protecting some areas as conservation units under the responsibility of the State jointly with a privatization process. Population participation is inserted through the formalities of a managing board. This is what happens in Vale do Ribeira, for instance. While we heard the women, we understood that such participation was tough, as it must happen within the times and under the terms imposed by the State — which can be seen in the language and formats used, as well as in the documents with many pages. This logic is completely different from that of the community.  Even so, women reacted, talked, objected. We kept asking ourselves how those women got to understand the documents. And they said they had not understood, but they had the sensation of knots in their stomachs. In other words, their first perception that it all was very wrong translated into a physical sensation. Reconnecting with that first feeling we experienced in our bodies was a way of beginning the resistance processes, dealing with the appropriation and solicitation of our terms and with the pressure on our leaderships.

In 2022, Bruno Pereira, an indigenist and government official of the foundation who worked with Indigenous people and was on leave, and Dom Philips, a journalist, were murdered. They were murdered on June 5, which is celebrated as the World Environment Day. Their bodies were found in June 23; there was a big commotion, and people remembered many others who have been continuously murdered in the Amazon as a result of agrarian and environmental conflicts. Some people have named this process a permanent war in these natural isolated regions, which are so relevant for keeping climatic balance, biodiversity, among many other aspects.

So, one of our commitments is to join those people by recognizing and learning about their contributions, but also to act to undo this process of artificialization of the territories. Our commitments also include struggling to expand life supports in all spaces, so they are no longer located only in isolated regions or refuges.  So that the refuges may expand.

Our discussion about body and territory, a relationship that can be learned from traditional views that have been resisting for thousands of years, must be exercised in the territories where we live. Such discussion must be brought to the artificialized territories of cities and incorporated into the processes of building alliances.

We struggle to free ourselves, minute by minute, inch by inch, from the colonialist, patriarchal, and capitalist impositions on our life.

Digitalization of Agriculture in Africa: what needs to be done?

The alternatives include developing technologies based on the principles of agroecology