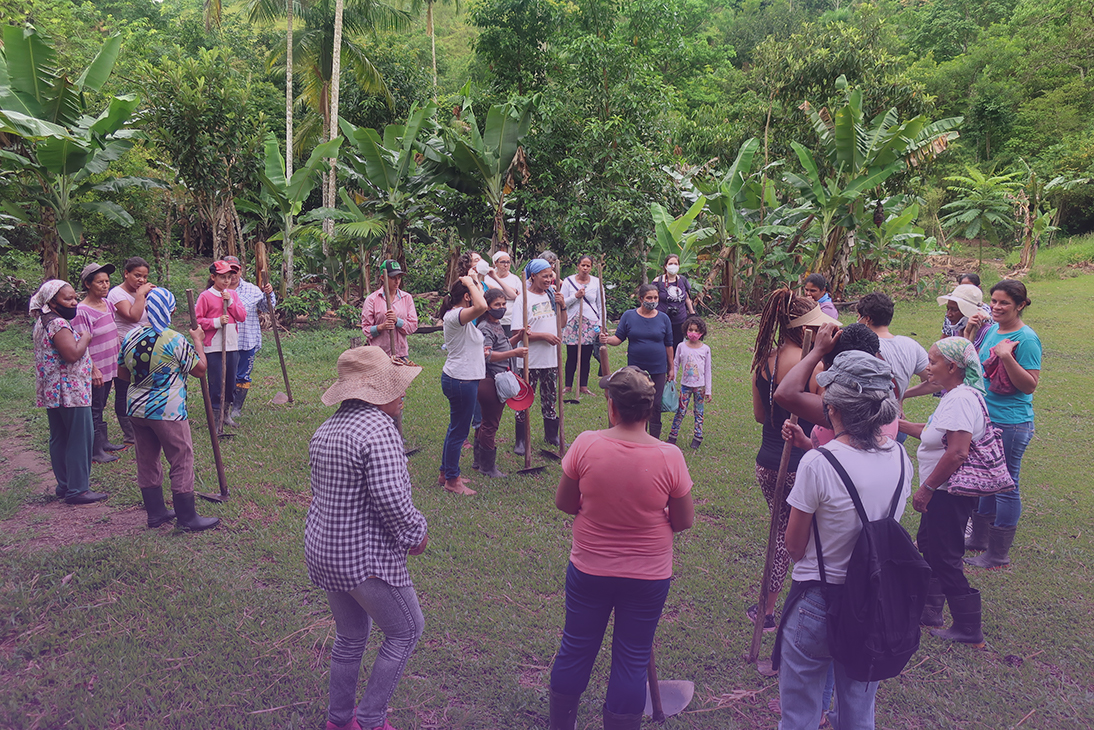 In 2011, the 4th National Meeting of the National Joint Coordination of Black Rural Quilombola Communities (Coordenação Nacional de Articulação das Comunidades Negras Rurais Quilombolas—CONAQ), in Rio de Janeiro, Brazil, decided to hold the 1st National Meeting of Quilombola Women,[1] which took place in 2014, in Brasília. Since that first event, the collective has been actively working in political deliberations and decision-making processes related to Quilombola women within the movement. In 2015, the Quilombola women’s movement strengthened its alliances by taking part in the executive coordinating board of the Black Women’s March, on November 18th, 2015. Between 2016 and 2018, there were six national workshops with Quilombola women against racism and violence and for good living; more than 1,000 women took part in the workshops directly. Since then, the CONAQ’s women’s collective has been collaborating with and strengthening Black women’s meetings and activities in different parts of the country.

Quilombola women have been taking on the task of establishing an intense discussion against the violence quilombos face across Brazil, addressing their specific issues and the current situation, which makes this violence more frequent and evident. Our aim is to point out the challenges facing this struggle, especially focusing on Quilombola women.

Women’s rights, as they struggle with their bodies in defense of their territories, have been invisibilized for a long time. Right now, we see the emergence of a worrisome scenario of setbacks against the rights of Quilombola peoples, amid a fascist and conservative ideology that has been echoing at a global level. This crisis—which is also economic—implicates even more exploitation and violation of Quilombola women’s lives. In recent years, we have seen the rise of several forms of violence against them: femicide, work overload, elimination of sexual and reproductive rights, increasing informal employment. This context tends to become worse with the social crisis boosted by the coronavirus pandemic and the overhaul package that has been promoted by the state. Not only the consequences of the crisis will take an unfair and disproportionate toll on Black women—especially from rural areas—, but the solutions that will be implemented by the state to overcome the problems and restore the economy will too.

Unfortunately, the different forms of violence suffered by Quilombola women have not decreased—quite the opposite, they continue to multiply and become more diverse. The struggle for territory plays a key role for Quilombola peoples demanding their rights, because the exercise of different fundamental rights relies on the territory, including the access to Quilombola school education, free use and preservation of socio-biodiversity, the right to traditional farming, and the right to culture.

The leadership of Quilombola women, in turn, is key to the political struggle for territory, as it sustains, protects, and develops the main element that supports the quilombo: collectivity.

The violence against Quilombola women defenders is produced in the context of the struggle for territory, in the shape of overt threats, slander and defamation, as well as intimidation against their families. These practices of violence impact not only these women individually, but also the collectivity of the quilombo, as they intend to destabilize leaders, the community, and consequently the struggle for rights.

In Brazil, a hidden institutional strategy is in force aiming to stall land titling processes indefinitely, while also restricting budgetary resources. This not only hinders the exercise of several rights that are directly related to the territories, but the unjustified slowness in land titling processes perpetuates the context of violence to which the quilombos and their women defenders are subjected.

This is why it is urgent and necessary that the quilombos are heard, that their demands are responded to, and that measures are taken to respect land titling processes and Quilombola peoples’ right to their territories, otherwise we will feed an extensive cycle of violence and social vulnerability.

Moreover, the crimes committed against Quilombolas are marked by impunity. The cases of femicide are especially alarming. Cases in which Quilombola women are victims of violence and have their lives taken from them—such as the cases of Francisca Chagas, a Quilombola woman from Joaquim Maria, in the state of Maranhão, murdered in 2016; and Maria Trindade, from Quilombo Moju, in the state of Pará, killed in 2017—require an effective and swift response from the state to stop the cycle of violence. Quilombola women who hold leadership positions have been experiencing political persecution, death threats, and illegitimate criminal prosecution aiming to intimidate their struggle. It is a fierce context of violence with severe consequences for the physical and emotional health of Quilombola human rights defenders.

As enterprises, construction works, development projects (such as ports and railroads), real estate speculation (new gated communities and resorts) advance toward Quilombola territories and the military are deployed to certain quilombos, they have historically restricted the free exercise of their rights.

There are many examples of enterprises that lead to conflicts related to property ownership, access to land, and the use and preservation of territories, compromising the autonomy and survival of the quilombos:

> the establishment of the Alcantara space center, the expansion of the BR–135 highway, and the construction of transmission lines, affecting numerous quilombos in the state of Maranhão;

> the expansion of agribusiness, impacting quilombos such as Invernada dos Negros, in Campos, Santa Catarina; construction projects of real estate developments, such as the ones that have been affecting the Mesquita Quilombo.

We should also point out the impact of environmental crimes committed by companies, such as the crime suffered by Quilombolas from the Brumadinho, Minas Gerais area, where a Vale dam broke in January 2019.

This offensive against the rights and lives of Quilombola women—either through state initiatives or private actors and their economic expansion interests—is orchestrated by two fundamental sets of violations of rights of the Quilombola peoples. One is the denial of the right to definitive land title for the ownership of their territories. The other is the noncompliance with the Quilombola peoples’ right to consultation, which goes completely against the commitment made by the Brazilian state in the 1989 International Labor Organization Convention No. 169. In this regard, the violation of rights is an accessory to the stalling of land titling processes involving Quilombola territories, the budget cuts, and the reduced budget execution to secure land titling processes, as well as the administrative rearrangements that obstruct quilombo regularization policies. Here the changes operated through the provisional presidential decree No. 870/2019 and the administrative rule No. 1/2018 of the Palmares Cultural Foundation should be pointed out, as they address administrative processes regarding the environmental licensing of construction works in Quilombola communities.

The following are the preliminary conditions for state institutions to acknowledge Quilombola women as rights-holders:

> government measures to secure the protection of Quilombola women;

> effective measures against the violent crimes committed against Quilombolas;

> an effective policy to defend Quilombola women against domestic violence and other forms of gender-based violence;

> guarantee of the continuation, in a swift manner, of land titling processes regarding Quilombola territories, and the Quilombola peoples’ right to Free, Prior, Informed, and Good-Faith Consultation, with transparency and access to information.

[1] Quilombolas are residents of quilombos, communities originally established as a place of resistance and refuge for Black people who were enslaved in colonial Brazil.