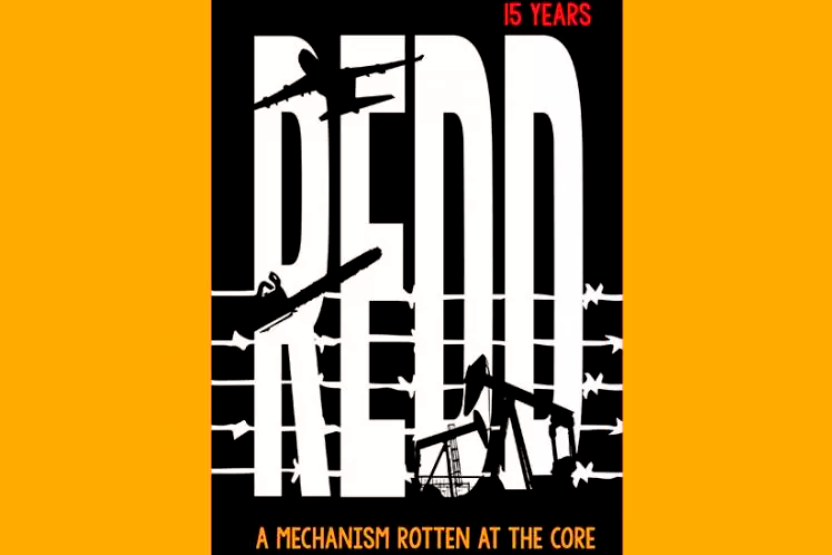 The Climate Impacts of Carbon and the Lies Behind REDD+

Read the publication “15 Years of REDD,” by the World Rainforest Movement

REDD+ is an acronym for “reducing emissions from deforestation and forest degradation,” a strategy that has ruled international forest policies since it was first introduced, in 2007. It is a way to keep the destruction going, as polluting businesses and governments can simply buy licenses that allow them to continue to pollute. They do that by paying financial compensations to communities that should conduct work in terms of reforestation or tending to the forest. While many of these businesses are based in the global North, the compensation work is mainly carried out in territories in the global South.

The REDD+ compensation system is a false solution. Its logic implies that companies would not have to worry about reducing emissions—which would reduce their profits—, but rather “compensate” for them. But that does not add up, because different sources of emissions generate different amounts of gas, with different impacts on the climate. Moreover, treating nature as a mathematical equation conceals the fact that destruction not only has global impacts, but direct impacts as well, also leading to violence and conflicts in communities and territories—and there is no compensation for that. The experience accumulated overtime shows how mechanisms such as REDD+ have been ineffective in fighting deforestation and climate change.

Marking 15 years of struggles against REDD+, the World Rainforest Movement (WRM) published the book 15 Years of REDD: A Mechanism Rotten at the Core, with 11 articles by different authors that look into REDD+ policies over the years and their impacts on territories and people’s lives. In Mozambique, Gabon, Democratic Republic of the Congo, Indonesia, Brazil, and Colombia—the countries mentioned in the articles—the commodification of nature puts at risk the ways of living of entire communities with false solutions that are harmful to the people and the climate.

To expand the circulation of critical perspectives regarding this policy, we are sharing one of the articles included in the publication, “Is all Carbon the Same? Fossil Carbon, Violence and Power,” written by Joanna Cabello, of the WRM International Secretariat. In her article, Joanna exposes a deceptive argument on which REDD+ policies are based: one according to which the impacts of carbon released from vegetation are equivalent to the ones resulting from burning fossil fuels. “By promoting the false assumption that all carbon is the same, scientists and policy-makers are also radically downplaying the fossil fuel industry’s contribution as the main cause of the climate chaos,”  she argues.

Social movements that defend life and environmental justice are against the financialization of nature and against the green economy promoted by policies such as REDD+. These movements advocate for a deeper transformation in the production model, arguing that it should not be subjected to the corporate logic of profit expansion at the expense of nature, life, and the work of communities. Grounded in the realities of struggles, the movements thus push for the reorganization of production, distribution, and consumption in a way that puts life on center stage, based on building food, energy, and technological sovereignty.

Is all Carbon the same? Fossil carbon, violence and power

The underlying assumption behind REDD is a dangerous lie: That the climate impact of all carbon is the same – be it the carbon released from vegetation (‘Biotic Carbon’) or the carbon that is released from burning oil, gas or coal (‘Fossil Carbon’). This assumption obfuscates the fact that the burning of ‘Fossil Carbon’ is driving climate change. It also conceals the violence, destruction and abuses at the root of the fossil fuel empires. So, what exactly are the differences and why are they so important?

Conventional scientists and decision-makers have largely endorsed the idea that the climate impact of all carbon is the same… be it the carbon released from vegetation or the carbon that is released from burning oil, gas or coal. This is a key underlying assumption behind carbon markets, REDD+, ‘net zero emissions,’ ‘zero net deforestation’ and now also the so-called ‘nature-based solutions.’ Essentially, without the assumption that emissions from different sources have the same impact on the climate, carbon offsets could not be established.

Why do so many people, scientists such as those of the Intergovernmental Panel on Climate Change (IPCC) included, continue to insist that there is no difference between the climate impact of the carbon that is present above the ground and that which is released when oil, coal and gas are extracted from the ground?

Of course it is easier and more convenient to assume that the climate impact of all carbon is the same. It is the basis for claiming that greenhouse gases from different sources (factories, refineries, land use, transport, cement production, energy generation and so on) and even different greenhouse gases (carbon dioxide, methane and other gases linked to industrial production), have the same impact on the climate and that therefore, the damage caused by emissions from one source can be compensated by reducing emissions from another. That is why the scientists advising the UN climate negotiations converted different gases that cause climate change into equivalent units of carbon dioxide or CO2 e. This equivalence is a precondition for offsetting. But carbon from different sources is not the same. Claiming that it is, conceals the violent histories, conflicts and oppression related to carbon extraction in most parts of the world.

It is crucial to recognize that the climate impact of releasing carbon that was locked up underground for millions of years and which is now burned as petroleum, gas or coal in large quantities over a short period of time, is different from the impact caused when the fast-moving carbon cycle in which some carbon is temporarily stored above ground, in trees for example, is released.

And why is this difference so important?

The carbon that circulates in the air, oceans, vegetation and soils (above the ground) is often referred to as Biotic Carbon. It can be stored temporarily in any of these places, including vegetation, such as trees. From there, this Biotic Carbon can easily be released naturally, through fires, storms or insect outbreaks, to name some prominent examples. Yet, historic large-scale forest destruction, especially in industrialized countries and for the expansion of industrial agriculture, has resulted in much carbon that could be stored in forests instead being accumulated in the atmosphere. Land clearance and deforestation have created an imbalance in the Biotic Carbon cycle: too much Biotic Carbon is building up in the atmosphere in the form of carbon dioxide. This adds to the carbon dioxide that has accumulated in the atmosphere as a result of fossil fuel burning.

In order to turn the Fossil Carbon into petrol, diesel and coal, humans need large machines to dig up and extract the carbon in those underground deposits. When this Fossil Carbon that has been locked away from the atmosphere for millions of years is burnt as fossil fuel, it will stay aboveground for a considerably long time.

The world’s vegetation, oceans and soils can only absorb so much of this excess; and are certainly not able to absorb enough of it, and fast enough, to contain the CO2 imbalance in the earth’s atmosphere. As a result, much of this excess Fossil Carbon piles up in the atmosphere, where it impacts the global climate.

Most scientists now recognize that the burning of Fossil Carbon is driving climate change. Yet, in their talks and policy recommendations they treat Fossil and Biotic Carbon as having the same impact on the climate. The consequence is that the climate debate is focused on ‘equivalent’ greenhouse gases in the atmosphere rather than on preventing that more Fossil Carbon is released from its underground deposits.

This is very problematic. By promoting the false assumption that all carbon is the same, scientists and policy-makers are also radically downplaying the fossil fuel industry’s contribution as the main cause of the climate chaos. And the damage goes even further. Claiming that all carbon is the same also helps conceal the violence, ecological destruction and the abuse of power that have been the foundation of the corporate fossil fuel empires. It also spreads this violence and abuse to where offset projects are supposedly storing an equivalent amount of the released carbon.

This convenient ‘all carbon is the same’ narrative has allowed fossil fuel companies and all the industries that depend on such fuels to continue business as usual, despite the almost three decades of UN climate negotiations. It has also protected corporate and financial profits, while slogans of ‘carbon neutral’ or ‘net zero emissions’ are providing legitimacy for continued corporate destruction.

Capitalism depends on Fossil Carbon’s energy. Fossil fuels are the engine and ingredient that today’s globalized (green) capitalism is addicted to. Climate chaos is thus a direct consequence of the constant destruction of underground Fossil Carbon deposits and their burning as fossil fuels. The false narrative of claiming equivalence between Biotic Carbon and Fossil Carbon is clearly political. It allows the fossil fuel industry and its allies to continue their very profitable and destructive businesses. Such an equivalence is another example of the power of the fossil fuel industry, which has over the last two centuries destroyed and militarized the territories it is occupying to extract, process and transport Fossil Carbon along immense networks of infrastructure, pipelines, roads, ports and waterways, all the way to the deadly polluting refineries and the pollution hotspots around them.

When, for example, giant oil company Shell falsely claims to be compensating the Fossil Carbon it extracts by planting large-scale tree plantations, at least three lies are being disseminated: the first is that Fossil Carbon can be made equivalent and its climate damage compensated with the temporary storage of Biotic Carbon above the ground. The second lie is that the ‘climate change problem’ is being addressed, while the reality is that offsets allow the continuation of fossil fuel burning. And the third is that ‘nature’ is just there, empty, for companies to grab as their carbon offset stores. Nothing could be further from the truth.

It is important to expose the lies and false narratives that are behind these assumptions. Buying into the false assumption that Fossil Carbon and Biotic Carbon affect the climate in the same way simply means that climate chaos, and the ongoing destruction of territories, is further accelerated.