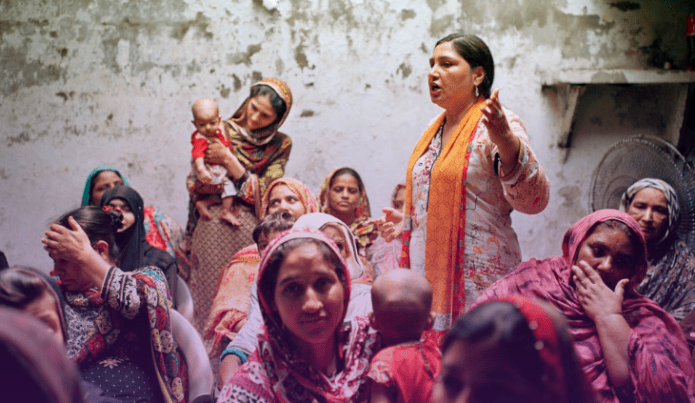 A History of Women Challenging Religious Fundamentalism in Pakistan

Capire talked to Bushra Khaliq, from the World March of Women, about women’s struggles in South Asia for their rights and liberty.

In Pakistan, the culture and the daily life are dominated by religion. Since 1977 an islamization took place, forming the Islamic Republic of Pakistan. The Constitution and laws became aligned with the Koran and Sharia[1]. Therefore religion is much more than a personal-political matter: it is the ideology of the state and its institutions, laws which poses many obstacles for women’s life and authonomy, as well for religious minorities. Criminalization and institucionalized penalities under “blasphemy” accusation[2] are part of the state’s control over women’s life and a challenge for grassroots feminist organizing.

To understand more about the impact of religious fundamentalism in Pakistan on women’s lives, Capire talked to Bushra Khaliq, executive director of Women in Struggle for Empowerment (WISE) and member of the International Committee of the World March of Women representing Asia. Read the interview bellow:

There are many challenges facing Pakistani women. Violence is deeply rooted in society and social and feminists movements still have a long way to go. In recent years, fundamentalist religious movements are gaining space. Could you contextualize the religious and political situation in Pakistan and how this so-called third wave of religious fundamentalism has affected women’s lives?

Religion has a greater influence in our daily life. It’s an everyday matter. The women’s rights, including their mobility, their decision about their marriage, their appearance, their sexuality, are all controlled by the patriarchal system coupled with religiosity. In Pakistan the minimum age for marriage is 16 years for girls and 18 years for boys. Though we cannot claim our national identity card or sign any contract before the age of 18, we can get married at 16. This notion is very much taken by the religion that says that, when a girl has reached puberty, she is up to marriage, witch causes a lot of forced marriages.

Throughout Pakistan, women are demanding to raise the minimum age of marriage for girls for 18 years, but the law is very strict and designed on the basis of Sharia and this religious mindset. The parliamentarians and other religious scholars are always united and resisting to this demand. Many girls are forced to be married at the age of 16 and they face the consequences of such marriages and the violence. Secondly, there is an institution called the Council of Islamic Ideology, a structure and a committee mostly male headed. They decide about the laws and, whenever we come up with denounces that women and girls are suffering, this council comes up with a lot of resistance and turns down our demands. These people say that our demands are non-islamic and that we are influenced by the western agendas.

Around 3% of the population living in Pakistan are from religious minorities (97% of the population are muslim). The Constitution says that everybody is equal and equal rights are guaranteed, but, on the other side, the practice is quite the opposite. We have witnessed incidents when  women from these minorities including christians and Hindus were frequently forced to convert to Islamism. People from these minorities are very helpless because if they go to the police station to get help, they will not receive justice.

Actually, In Pakistan, any progressive thinking, any discussion about women emancipation can become a threat to the security of the person.

How does this religious and political situation connect with economic policies?

When it comes to the connection of this mindset with the economic empowerment of women in our country, we see that we are in the lowest rank. Our participation in the labour force it’s only 23%. Because this is the concept taken by men: that women are meant to take care of their house and the children. If they go outside, it’s not a good thing. Their bodies, their choices, their concept of development is directed and controlled by the men of the family. Patriarchy regulates our lives. Our movement and mobility are restricted and, most of the times, we are unsafe when we go outside. When women go outside they can be harassed, humiliated, raped, disrespected.

Also, the women’s economical and social status is affected by this mindset. We have the inheritance laws here. Between the brothers, the son will be awarded with his inheritance twice as much as the daughters. Our share in the economy of our parents is being divided on the basis of discrimination. These kinds of economic resources can help women economically uplift. But, here, the majority of the brothers and fathers define ways to deprive the daughters from their inheritance.

We see that only a small number of women work and participate in public life. There are good examples with more women becoming entrepreneurs, seeking new professions, but still we see that the majority of women are forced to be at home involved in unpaid care work. This is the cycle of the understanding and practices which makes us more vulnerable and less active economically.

How does this happen in other countries in South Asia? Are there common elements?

India, Pakistan, Bangladesh and Afghanistan are part of South Asia. All countries in this region share the majority of the problems. In India, they have the patriarchal roots and it affects women’s daily lives, but on the other hand, their State has separated itself from religion. We see that there is a huge social mobilisation. Women are outside in these beautiful social mobilizations, breaking barriers and breaking the silence. The farmers are opposing pro-agribusiness laws. Initially, the male farmers came out in millions for the protests, but, later, thousands and thousands of women farmers also came, protesting and making a new history of resistance. Despite all odds, there are  beautiful and very brave women fighting against the religious and patriarchal mindset as well.

In Afghanistan, women are suffering from the last 40 years because of the U.S. hegemonic interference in the name of development, of the Jihad[3] and the war against terrorism. Women’s rights are not the priority. A lot of crime and violence happens against the afegan women, not only within their homes, but in the Parliament, on the streets. Terrorism and extremism is one thing but how women’s lives are beeing destroyed it’s also a big issue and a challenge.

Similarly in Bangladesh, religion has a greater impact on people’s lives. For the last decade we are witnessing that Bangladesh is progressing. They are coming up with some progressive laws, and women are becoming a part of the economic activities. Many women are now becoming part of the public life even though they are oppressed within their own private lives. Even so, poverty and other social issues are still there.

Having a dissenting opinion about such things makes you a vulnerable person in these places. Of course we are facing multi layers of the patriarchal, religious and capitalistic ugliest agenda here, but side-by-side we see that the grassroots and the feminist movements is beeing beautifully driven in all of these countries. This gives us strength and hope for a life with dignity,  basic rights, own decision-making for our sexuality, our bodies and our choices.

What are women’s strategies to protect themselves from this religious fundamentalism?

I must share the recent wave of feminism in Pakistan, which is more inclusive in terms of the women themselves. Issues that we are highlighting have never been discussed in the public before. The first wave of feminism came up around 60 or 70 years ago, with women fighting for participation in the public life and getting envolved with charitable work. It was started by women from big and rich families which had political backgrounds.

Since the Islamization [iniciated under the military Regime between 1977 and 1986], there has been a huge resistance from women in Pakistan. Progressive people showed their resistance and we can say that this was the second wave of feminism here. They challenged the Islamic laws which were negative towards women rights, impacting their political, social and economic life. On one side, we were facing the military dictatorship, and on the other side there was the religious mindset of political parties. The huge resistance movement led by women challenged those negative and institutionalized laws, practices and concepts.

The third wave is a protest against social oppression, rape, patriarchy, capitalism, and violence against women. The students, professionals, transgender, NGO workers joined the movement and brought their own issues regarding their economic deprivation. The capitalist system was being challenged and the debates around equality came out more and more. It was when social organizations and NGOs were emerging, and this is why so many voices were coming from different corners.

Now, for the last four or five years, non-binary people, transgenders, women with disabilities, less educated women, farmers, factory workers, ordinary women, intellectuals, they’re all together taking the lead under the slogan of “Aurat march”, an urdu expression that means “women are marching.” Women are protesting and we denounce the culture of rape, the male dominance in our homes, on the streets, at the workplace. We denounce sexual harassment and we demand respect and dignity for all.

We cannot say such words in public, but in the collective, women are together. This unity is the best strategy to denounce such violences and to fight back those forces.

We are going forward despite the fact that every year, on the International Women’s Day of Struggle, the fanatics and the religious extremists make huge noise and attack women and girls. This year, the blasphemy law was being voted and it gave meaning to the women of this country. They are outside, bringing those sensitive issues, which have never been discussed in into the public, such as rape, sexual violence, reproductive issues, forced religion and they are charged with the blasphemy laws. Like that you can see how misuse of religion can be used to silence women voices.

[1] Sharia is the Islamic law, based on faith derived from the Koran and hadith. It is used in several countries with a predominantly Muslim population.

[2] Inherited from the British and established in the 1980s, blasphemy laws in Pakistan punish anyone who insults Islam. These laws are known as to be widely abused in many ways to punish those who fight for their rights and freedom of expression, including, men, women, writers, journalists, and religious minorities.

[3] Jihad is an Arabic to refer to struggle, striving, effort. It is also a concept in Islam, which encompasses religious duties to maintain and spread the faith. The word is often used by extremist groups to refer to the armed and religious fight against the “unfaithful” or non-Muslims.