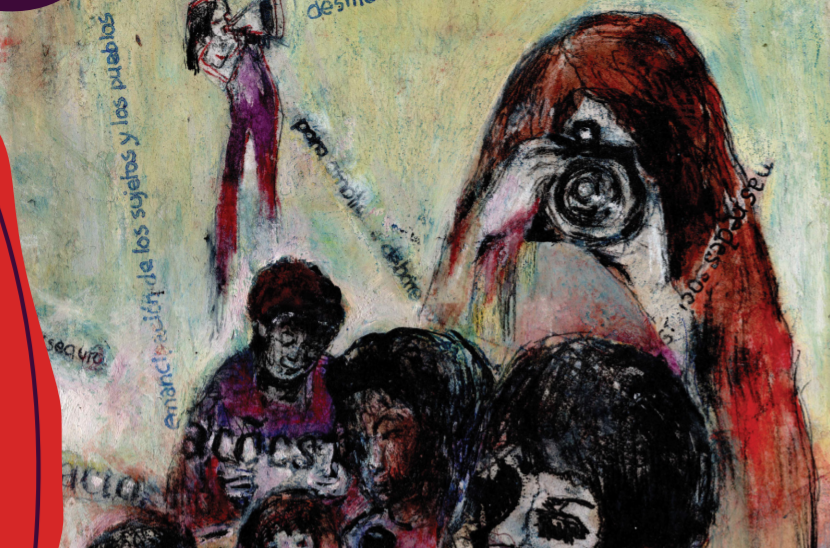 Grassroots movements from around the world engage in grassroots feminist communications. With creativity and collective work, militants share experiences, political agendas, mobilization efforts, and discussions from the collective perspective of those who are engaged in the struggles. Communications make movements happen; movements make communications happen.

Grassroots organizations create their own forms of communications that differ from the standard mainstream model of corporate networks and media. Their communication proposals and formats as well as language choices are multiple and connected with the actual reality of where they are and with whom they want to speak. Exchanging feminist grassroots communications experiences is a way to understand the political contributions of collective experiences different organizations have had over time through their communications agenda. And it is also a way to improve practices, exchange possibilities, create new collective pathways, and strengthen alliances.

This is the driving force organizing the e-book Grassroots Feminist Communication: Experiences of Women in Movement [Comunicación feminista y popular: experiencias de las mujeres en movimiento], published in Spanish by SOF—Sempreviva Feminist Organization [SOF—Sempreviva Organização Feminista] and available free of charge. “Grassroots feminist communication is deep rooted in spaces where women live and struggle. This is why word of mouth, community radio stations, and newspapers are key and cannot be replaced by communication—and life—that is becoming increasingly digital,” the presentation reads. The book is a collection of articles by women from seven different countries in Latin America and the Caribbean.

Members of the World March of Women from Brazil, Chile, Cuba, and Venezuela, the Continental Communications Collective of the Latin American Coordination of Rural Organizations of La Via Campesina (CLOC-LVC), the Real World Radio, and the Grassroots University (Universidad Popular—UPo) share contributions about their collective experiences with grassroots feminist communications and address the challenges each context presents to them.

We share below an excerpt from the article “Expand the Conversation: Feminist Community Radios From the Experience of Real World Radio” [“Abrir la conversación: radios comunitarias feministas desde la experiencia de Radio Mundo Real”], by Azul Cordo, Mercedes Eguiluz, and Valentina Machado. They are members of the Real World Radio team, a media project by Friends of the Earth International that has been producing radio content since 2003 about anti-neoliberal, feminist, and anti-racist grassroots struggles for environmental justice and food sovereignty.

Grassroots Feminist Communications: An Essential Strategy and Support To Change the System

Global perspectives are not always built as the sum of local perspectives. On the contrary, they often tend to make the reality of few places around the world universal. We can see, read, and listen to this every day on mainstream media. For example, they talk about the Covid-19 pandemic, but the health emergency poses some questions: Does the virus impact the entire world the same way? Do we have the same tools to protect our lives? What structural conditions make some communities more vulnerable than others? Is it felt and experienced the same way in Paris or Bogota? Is it the same in this city, the capital of Colombia, and the rural areas of the country? On whom falls the burden of a society facing a health crisis?

The media that claims to present a “global” analytical perspective ends up taking and conveying a still picture of a particular place, which, on the radio and audiovisual media, could be understood as if a voice or an image could represent the whole.

We need a lot of pictures (and so a lot of voices), in movement, of different kinds and formats, because absolute truths, among so many things, negate the diversity of different territories. These images are conveyed through community and alternative radios through the voices of fighters who defend their territories every day and are conceiving alternative solutions. This is why local media is important, both in terms of content production and consumption. This is a task that community outlets are carrying out every day, and usually against the current, in different neighborhoods, areas, and villages.

Grassroots media outlets situated at the base of communities, with their voices, experiences, and knowledge, open up new realities, which are right in front of us and we fail to see, and they create worlds of possibilities. It is no small task to show reality under no guise, with no spectacularization.

Caring for and respecting grassroots knowledge—knowledge that comes from experience, from the exchange between generations, from everyday practice, from sharing with each other—is a rare thing in mainstream spaces. On community media, on the other hand, a fruitful field emerges to develop and convey ancestral knowledge.

Community media does not mean only spaces for communications. These are spaces for building, instruction, education, empowerment, and struggle.

Through this achievement and managing the commons, through participation and sustenance of life that make them possible, grassroots feminism in its different forms have a lot to do with it. Community forms take production, reproduction, and accumulation of capital away from the center and conversely focus on something we share and which crosses all of us: life. They lead to building knowledge born from the heat of collective struggle, having territories and their contexts at their core.

Speaking up, voicing it, makes it possible to organize and express the things we think and feel out of their solitude and private realm. And by making them public, they are placed as part of a battle and become political. This step, which is key in every thought, is leveraged by grassroots and community media that shape a space where “speaking up is possible.”

Community media is the other power. Not the fourth power—this is exercised by mass media, which instills fear, restricts voices, and negates existences. But it is rather power as the potentiality of action, as “I can,” which, as it is combined with others, becomes “we can,” we want, we desire.

While the mainstream media agenda completely ignores feminisms as the big movement spearheading change in the 21st century, community media outlets have an alternative agenda that includes and/or is created by social movements and increasingly includes feminism from a class and gender perspective.

The ruling communication models have been greatly responsible for the reproduction of patriarchal society, through their content and advertising and, by claiming this false objectivity, they have portrayed us as our own enemies, making us scorn our own bodies. They portray us as fragile and dependent. Grassroots media outlets wage a battle against this discourse and these narratives, disrupt binarism, and introduce plurality and diversity.

Plural and diverse as the territories themselves, these alternative media outlets broaden the message and show us what we are—creators of change, weavers of alternatives, we are the ones reproducing and sustaining life, we are diverse, and we are everywhere.

Moving away from talking about “women things” toward proposing a feminist perspective in which any topic or issue can be addressed would have been impossible without alternative communication networks and without grassroots feminisms weaving networks.

The same is true about own voices. Community media efforts have started the conversation (and, at this point, are challenging) the idea of “giving a voice” to those “who don’t have one.” At Real World Radio, this is different. Voices are our own—they do not need permission and they do not need to be granted. Community media opens spaces and speaks in firsthand terms—as “I” or “we”—, not being subjected to the mainstream logic of speaking for others. Those who tell the stories play the major roles in them: peasants, Indigenous, Black, poor, crazy, imprisoned, nonconforming women, those women the ruling media has systematically and historically hidden and rendered invisible.

So, with our own voices, we set off a path toward understanding intersectionality, the sum of oppressions over bodies. Feminisms, by raising their voices, show us the injustices of the patriarchal system as well as the power of being together: a movement made from the ground up.

As stated in the manifesto We Are Journalists and Feminists [Somos periodistas y feministas, available in Spanish language], by the Network of Feminist Journalists of Latin America and the Caribbean [Red de Periodistas Feministas de América Latina y el Caribe], feminist journalism “expands the conversation” with quality content, with the presence of political and social actors that contribute with their position to the discussion and promote changes in public opinion. The environmental agenda must be addressed from a class and intersectional perspective, one that can read the world’s oppressions and exploitations, but also with the power of change through which we fight.

Azul Cordo and Valentina Machado are journalists and Mercedes Eguiluz is a translator with the Real World Radion team.