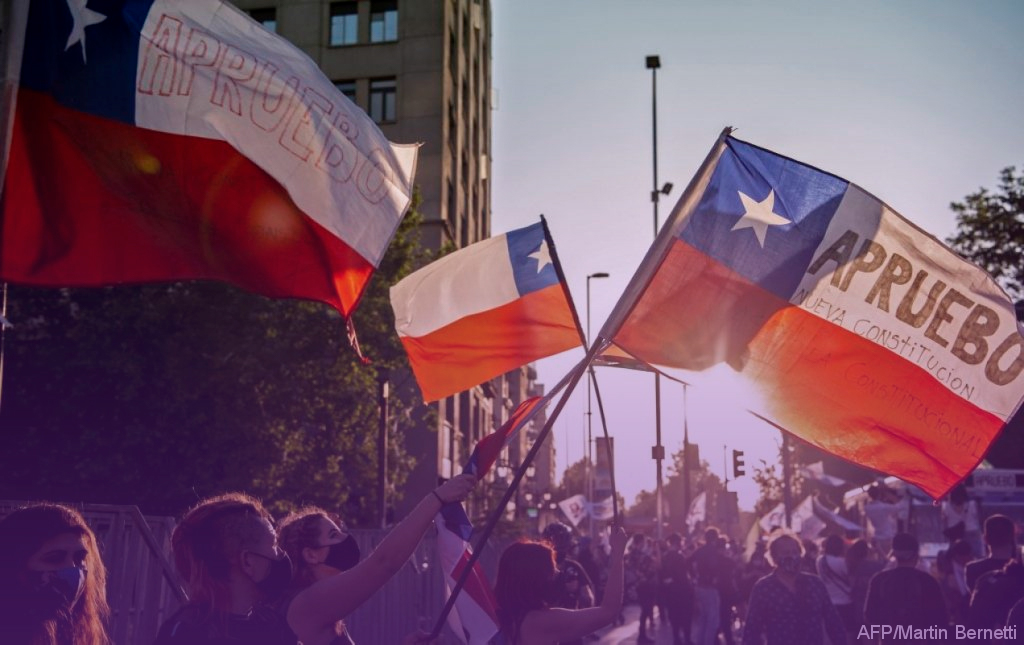 In October 2019, several grassroots sectors in Chile rose in intense mobilization against the neoliberal model and policies implemented by president Sebastián Piñera. This process of social change has led to the establishment of a constitutional convention, from where left-wing sectors were empowered to draft the country’s new Constitution.

When the process of change and possibility of conceiving a new Constitution first started, we immediately understood it as a new scenario that we had never thought would emerge so soon. A scenario that could not be overlooked in the realm of communications. This is why we presented a demand for the right to communication, which goes hand in hand organizations that bring together journalists, communicators, and feminists—and we are filled with pride of it.

“The new Constitution must acknowledge the entire society as the central participant in communications, guaranteeing their collective rights that will provide them with access to information, generation of opinions, and all kinds of expression in a timely, truthful, diverse, and plural manner, through all means. Concurrently, it must allow sectors that have been long excluded from public influence to circulate their knowledge and experiences.”

We know that the right to communication is a less visible topic than other constitutional demands, such as the right to education, health, and housing. However, it is a demand we are trying to put forward as a basic necessity. We are saying that we must guarantee human rights in terms of communications as a way to avoid precisely the kinds of scenarios such as the one we are currently facing. And what is happening right now?

Chile is now getting ready for the second round of its presidential election, in which it will choose between the left-wing Broad Front [Frente Amplio] candidate Gabriel Boric and the far-right Republican Party candidate Jose Antonio Kast. Like other parts of the Americas, right-wing forces are mounting a strong offensive to spread misinformation with fake news, which ultimately obstruct any process of democratic advancement.

“While Chilean TV channels were broadcasting long reports on fires, violence, and looting, people out on the streets were calling others to ‘turn off their TVs’, a clear sign that they were upset with what the mainstream media was doing. In fact, the opinion poll Use and Assessment of Media Outlets and Social Media During the Social Outburst in Chile[Uso y evaluación de los medios de comunicación y las redes sociales durante el estallido social en Chile], conducted in 2019 by the Pontifical Catholic University of Chile, showed that, when asked about the work the press conducted during the demonstrations, more than 80 percent of interviewees believed journalists do not cover important events; 71 percent said the press usually shows only one side of the story; and 91 percent disagree with the statement that journalists contribute to managing the crisis and help the population to recover.”

As feminist journalists, we have been observing media outlets, devoting particularly close attention to recent weeks due to the election period, when misinformation and fake news abound, in some cases spread by the national press.

The number of votes amassed by the far right in the first round of elections—the majority of votes—was staggering. This disastrous situation shows how necessary it is for territories, organizations, and different sectors of society to have their own media outlets. This election outcome is the result of what the hegemonic media has been spreading: discrimination, hate speech, and fallacies about unions, organizations, and grassroots sectors.

This is happening as Chile does not have public media outlets, and where community media is extremely criminalized. Basically, what we have is a 100% private press system relying on big economic sectors. In Chile, media owners are bankers, retailers, and miners. There is nothing new about this, but we see how this hurts a democratic conversation in terms of thinking about the next government and a new Constitution.

“Regarding the press, there is virtually a duopoly involving two corporations: El Mercurio Sociedad Anónima Periodística (SAP) and Consorcio Periodístico de Chile (COPESA). These two companies are market leaders with ratings accounting for 82 percent of the industry’s readership and more than 84 percent of its advertising revenues. […] The owners of these big companies—the Edwards Group and the Saieh Group—represent Chile’s traditional economic industries, which are connected to the right and, additionally, use their editorial pages to promote an agenda of conservative values and criticism against topics such as women’s sexual and reproductive rights, environmental conflicts, and the militarization of Araucanía, where the Mapuche people lives.”

The lack of public and community media outlets leads to increasingly precarious labor conditions for media workers. It also affects the possibility of voters to be informed and make good decisions for their future. Additionally, grassroots, local, and territory-based expressions of so many people, communities and territories are invalidated and remain completely invisible under this model.

Right to Communication To Defend Democracy

Securing the right to communication as proposed in the new Constitution draft implies conceiving a democratic communications system. This means: securing human rights; establishing a public media system; guaranteeing development and support to community media; allowing the state to secure this right by implementing policies aiming to support, foster, and create media outlets.

Therefore, what we are doing, from a diversity of territory-based organizations of feminist journalists and mixed-gender organizations, is an effort to establish a conversation that was rendered invisible until the social outburst, only limited to small academic sectors.

Through a feminist and intersectional approach, we have formulated the role of women and nonconforming people in communication. This way, we move away from the harmful effects of hegemonic media outlets, which we are familiar with, with their tools to censor the majority populations.

We must conceive communications as the possibility of the entire society to develop media outlets with equal conditions and no economic restrictions. This is the only possibility to move toward a much more just and well-informed society, one that does not feed on discrimination and hate speech.

Rocío Alorda is a feminist journalist. She is a member of the World March of Women, Chile’s Feminist Journalists Network (Red de Periodistas Feministas de Chile), and the first vice president of the Chilean Association of Journalists (Colegio de Periodistas de Chile). This article is based on her speech at the Feminist Communications and Technological Sovereignty (Comunicação feminista e soberania tecnológica)workshop, held by SOF—Sempreviva Feminist Organization on November 30th, 2021 as part of the launch of the publication Feminist and Grassroots Communication: Experiences of Women in Movement [Comunicación feminista y popular: experiencias de las mujeres en movimento].