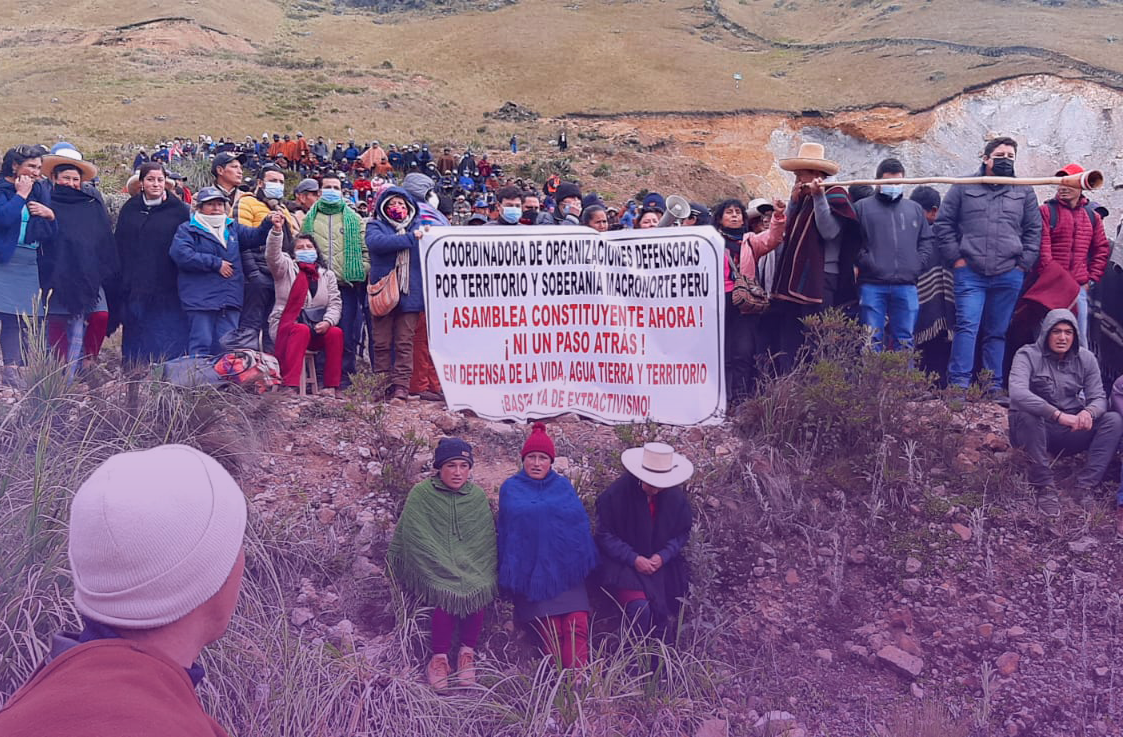 Resisting mining megaprojects is a task peasant and Indigenous communities carry out every day in Peru and many other territories in Latin America.

In January this year, we, as militants of grassroots organizations from Peru, organized a strike to demand the removal of the AntaKori mining project from the Sinchao area, Chugur-Cajamarca district, where the mining company Anta Norte has operations funded by the Canadian company Regulus Resources. The strike started on January 17th and it temporarily broke up on January 25th, after a visit by a government commission. National, regional, and state authorities took part in a people’s assembly along with three thousand people, including men, women, and children.

As a result of our pressure demanding that these mining operations be discontinued, the commission said they will conduct an assessment on their technical and social impact. We still do not see this as a win, because we know that the company and the powers involved with it will try to justify the miner’s actions. Members of the commission include mayors, ronderos [peasant patrollers], and local village defense committee leaders.

We question the way how transnational corporations have come into our territories without holding prior consultation and without respecting our communities’ decision-making rights. Since 2010, Regulus Resources has insisted on coming into territories without consulting local populations. In the dead of night, during the pandemic, the miner barged into the territory in 2021. Their drilling operations are severely impacting the environment.

The water that runs through the area where the company wants to set up its mining project comes from the Chancay Alto Basin, through the city of Lambayeque all the way to the city of Chiclayo. This is the only basin that has not been contaminated. Its springs supply the entire coastal area, all the way to the north, to Lambayeque. Contamination would severally affect both farming activities and the health of thousands of people across its course.

Contamination caused by extractivist projects has already caused the death of at least 17,000 fish. Pastures are drying up, cattle is losing hair, sheep are not producing milk, and other animals are dying. As a sister and leader has put it, “We used to sell milk, but now people don’t want to buy it, claiming it is contaminated with heavy metals. So basically milk is no longer a source of income for us.” Lead was detected in children and, according to 2016 reports by the Ministry of Health, nearly 372 children and adults had heavy metals in their system. The water is contaminating people and nature. This is why people will not accept mining anymore.

Enforcement to prevent contamination is weak because state institutions and the entire normative framework favor companies. Since the Alberto Fujimori administration through to recent presidential administrations, they all tend to loosen up environmental regulations dedicated to overseeing companies.

The Organization of the Strike

The AntaKori project is now at its fourth stage, which is the planning stage on how to conduct operations. We, as community defenders of this territory and adjacent districts, voted against this project and we will hold our ground in this struggle.

We decided on how to conduct our strike on January 8th. On the 17th, we occupied the mining project road. The strike was organized by more than forty organizations, including the peasant patrols[1], defense committees, local organizations, and organized civil society from nearby villages and communities.

This struggle is not just now being organized—it is not like suddenly our communities have decided to start a strike. It should be noted that, at least since the year 2000—and even way before that—, we have been organizing our struggles in defense of water, land, and territory. An emblematic case was the Manhattan mining company, in the city of Tambogrande. Thanks to grassroots pressure, we were able to remove it from the territory and have Latin America’s first popular consultation [consulta popular] held in 2002. Our joint efforts then continued during the Conga project, when our unity command gathered the communities who were standing up against extractivism and defended the women and men who were being criminalized for struggling and defending our water, our bodies, our land, and our territories.

Now, as the strike was underway, other mobilizations took place in the area, such as in Lambayeque and Cajamarca. In Lambayeque, our mobilization denounced that water was contaminated with arsenic, lead, and other heavy metals due to the La Zanja mining project. Mobilization activities against mining operations are also taking place on a national level, such as on the southern mining corridor.

We, as women, are mobilizing for life and because our production and our ways of living are being affected by mining operations. Women’s participation is extremely important for resistance efforts, but we cannot ignore that sexism and patriarchy exist. It is men who still spearhead struggle processes, but there is an important group of women—particularly the World March of Women—from which we work to create processes of de-patriarchalization, including within strikes.

During a strike action, a sister who was holding her baby asked for the floor and heard that they could not let her speak because “there was no time.” So we replied, “Comrade, how are you stopping her from speaking? Come on up, sister!” For women who are mothers, mining is unacceptable, because it affects children’s health and even their food. We must continue to insist on women’s participation in processes of change.

As grassroots community feminists, we understand that the many kinds of violence perpetrated against our territories are the same that inflict women’s bodies. Transnational mining companies divide us and generate conflicts between sisters and comrades by using patriarchy and sexism to do so. In different shared spaces with our comrades, we practice grassroots education, which is also conducted through our grassroots schools, where we discuss topics of feminism. Also, the very struggle and strike become a stage for debate and discussion.

The Model Must Change

This grassroots mobilization is also taking place in a context of militarization and criminalization of protests. Even under the new Pedro Castillo administration, the National Police continues to shield transnational corporations.

President Pedro Castillo is more aligned with the peasant, Indigenous, and territory-based struggles, but the rules of the game have not changed. The only thing that changed is that now there is more room for discussion, but deals are ultimately not followed through because the contracts with the companies are not reviewed. Amid all this, there is life, and, without water, there is no life.

Peru remains an extractivist economic model. This has not changed, because in order to change this model, a new political Constitution must be established. We continue to live, resist, and struggle under the Constitution that has been inherited from the former dictator Alberto Fujimori, who handed over the entire national territory to transnational companies and awarded most concessions to mining corporations.

“You don’t care about us—on the contrary, you care about generating resources and making profits,” a sister told authorities who attended the assembly. “You claim that, if there is no mining, there are no jobs. But what use do we have for a bag of gold when we know that money will not be enough for our lives or our children’s lives?”

We have been living under the same scenario for 30 years: under the systematic spoliation of the lands of peasant, traditional, and Indigenous communities across the country. In Peru’s biggest mine, Las Bambas, in the south, they did not hold prior consultation either. People mobilize every month and still deals are not respected. Mining companies do not take these deals seriously, they don’t respect them, and the government continues to disregard that.

We do not want extractivism in our territories—we want to change the rules of the game. We are promoting community-based processes of constituent assemblies. We need a grassroots, parity-based, plurinational, and sovereign constituent assembly process, because we want to make sure to have the participation and voices of our Indigenous peoples, Black people, and women. We want a new Constitution to defend the rights of the peoples, of women, and our diversity, one that protects our freedom to decide whether or not we want mining operations.

[1] Peasant patrols [rondas campesinas in Spanish] are community-based organizations established to defend rural territories in Peru since the 1970s.