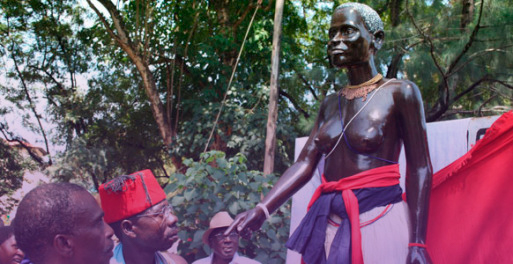 Mekatilili wa Menza was born in the Mutara wa Tsatsu Ganze village, Kilifi county, in the 1840s. She became more involved in the political struggle between 1912 and 1915, as one of the leaders of the Giriama people against British colonial forces in Kenya. The Imperial British East African Company (IBEA), the colonial authority in the territory at the time, had increased its economic pressure on the Giriama people,  charging “hut taxes” and imposing increasingly strict control over the palm wine and ivory trade, two essential products for the economy in the region. Guards also started to recruit young men for forced labor away from their land.

Before that, around 1870, Mekatilili’s brother was kidnapped, and there is evidence that he was forced into the slave trade that still happened in the region. In 1885, after the Berlin Treaty, which strengthened the economic rule of the United Kingdom, the Imperial British East African Company was created to control the territory that is largely Kenya today. In 1896, the British East Africa Protectorate established the colonial organization of the territory, marked by the construction of a railroad connecting the port of Mombasa to Lake Victoria. This led to a long process of pillage of nature and exploitation and subjection of the peoples. The residents of Giriama were aware of strangers coming and causing great suffering to their lands and their ways of living. They talked about the prophecy of Mepoho, an ancient story likely dating back to the 13th century, which anticipated the coming of white men.

Giriama has always resisted against British control, but their struggle became more intense as of 1913. During the first years of imperial rule, in the late 19th century, there was little contact between the people and the colonizers. However, in May that year, the British administrator Arthur Champion assigned headmen and councils to preside over 28 recently established territories in the area, including the Giriama villages, and turn them into communities dedicated to colonial interests. In Giriama, there were Elder Councils that discussed the political affairs in the community, but they could not act as chiefs, unlike the European model. Therefore, the colonial imposition of British-appointed chiefs represented a violent change in the way of living and organizing of the Giriama people.

Anti-colonial fighters were joining forces and meeting at the Kaya Fungo, a center where rituals and social events were held. Mekatilili, who was 70 years old at the time, was very active and took on a leadership role in the resistance movement, making speeches at the center and visiting local villages in July and August 1913. In one of her speeches, she called everyone to swear oaths of resistance during the sacred funeral dance Kifudu. This dance is performed as a way to bring communities together to help transport the spirits to the realm of ancestors, and to express solidarity in difficult times. The mobilizations to keep these ways of living alive and rebuild grassroots sovereignty brought together traditional culture and anti-colonial resistance. They played a key role in the struggle that rejected all cooperation with white men, which included refusing to pay the “hut tax.”

In August 13th, 1913, the Giriama people held one of their most famous acts of rebellion. During a meeting with Arthur Champion, the colonizer who was trying to diminish local resistance and recruit youth to fight in World War I, the leaders walked into the venue with a chicken and chicks. They challenged Champion to get a chick from its mother hen, but it pecked at his hand. The leaders then said the same would happen if he tried to take their children from their people to the war. When World War I broke out, most of Africa was under the colonizing rule of the European countries that were waging it. The continent was the source of raw materials and exploitation of labor that fed these imperialist powers. In response to the rebellious action of the Giriama people, members of the IBEA delegation opened fire, killing people indiscriminately and destroying houses in the community. Mekatilili and another leader, Wanje wa Mwadorikola, an active participant in actions of resistance, were sent to Kisii, near Lake Victoria, where they were held in prison.

That same year, in his tour of inspection across Giriama areas, Champion documented the grassroots resistance in his October report, in which he admitted that “every Giriama is much more afraid of the kiraho (oath) than of the government.”¹ While in prison, Mekatilili told the British administration that her people rejected the colonial tactics of indirect rule through government-appointed chiefs and addressed a concern about the cultural changes imposed to society.

After six months in prison, on January 14th, 1914, Mekatilili and Wanje walked free and trekked more than 700 kilometers back to Kilifi, on the coast of Kenya. The return of Mekatilili and Wanje led the colonialists to retaliate, shooting dozens of men, women, and children, capturing animals, burning food stocks, homes, and bombing the sacred Kaya. The attacks against their lives and grassroots symbols sparked an intense uprising, which forced British colonial authorities to reduce their control over the territory.

Mekatilili was arrested again on August 16th, 1914. This time, she was sent to Kismayu, Somalia. In 1919, Mekatilili was released from prison and was able to return to the Kaya, taking on a role of leadership in the women’s council. Mekatilili wa Menza died in 1924, and was buried in the Dakatcha Woodland. Every year, a festival named after her pays tribute to her. Recently, the stories of women fighters around the world are being uncovered by grassroots feminist organizations, and historians are investigating them from new perspectives. They often face the lack of records and documentation and are challenged with recounting these collective processes in a way that is not individual or mystical.

The lives dedicated to the struggle are never alone: where there is a woman taking the leadership in processes of change, there are always so many other women and a whole people in struggle, even if their names still remain anonymous. The acts of resistance of Mekatilili and so many other women for the self-determination of their people inspire many African activists to continue to struggle for freedom today. As the singer and World March of Women militant Lydia Dola says, Mekatilili has opened the way for feminist struggle. “Those days women were not in the front in fighting for justice. She’s one of the women who were brave enough to stand and fight for the people. She’s a very importante person because the population became rebelious because of her leading in a period when women’s voices were not heard.” The singer collectively produced the song Wamama Ma Fighter (Women Fighters, mixing Kiswahili and English), a celebration of Mekatilili wa Menza and all women who fight for justice.

¹ Arthur Champion’s report is quoted in the book The Giriama and Colonial Resistance in Kenya, 1800·1920, by Cinthia Brantley. Univesity of California Press, 1981, p. 89.