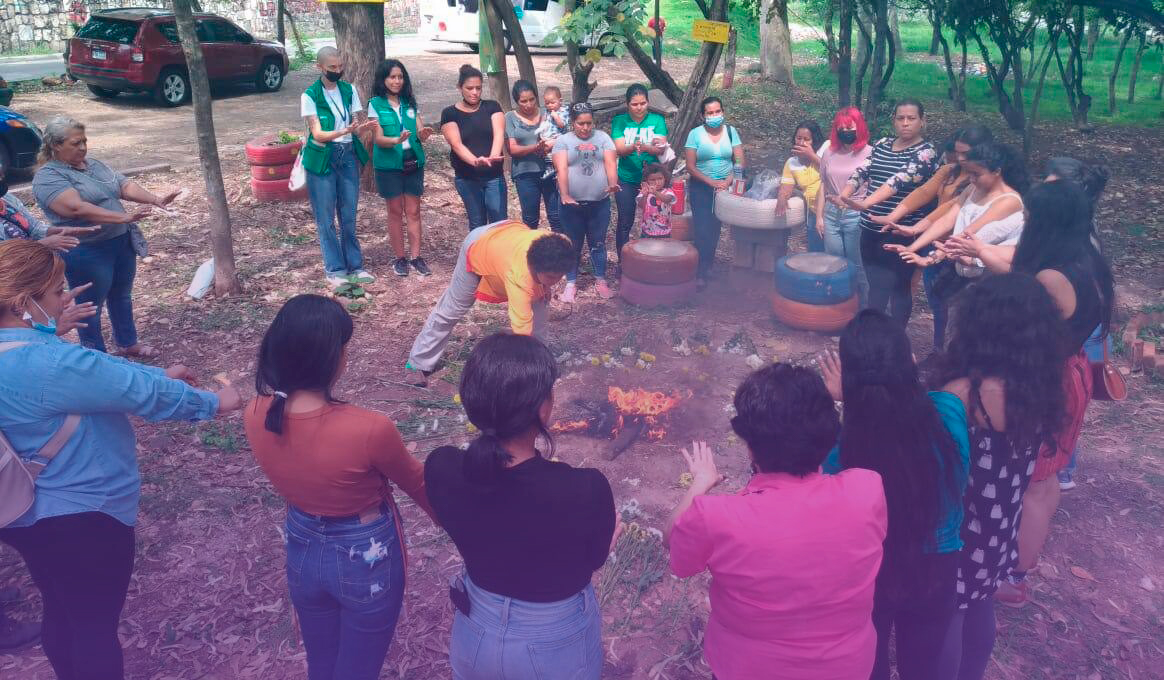 Women with at least 16 independent feminist organizations from different parts of Honduras joined the “Viva OFRANEH!” Caravan and occupied the Garifuna territory between May 19th and 22nd—more specifically, the Triunfo de la Cruz community, in the state of Atlántida, a disputed territory where the African-Indigenous population faces the threat of displacement.

The women occupied the Garifuna territory to “not only know, but comprehend that solidarity is about being together, knowing the names and the stories that make us stronger,” they wrote in a statement.

“This is a very powerful act, a camp in a territory marked by many conflicts driven by corporate interests. The very presence of women is an act of resistance,” says Melissa Cardoza, one of the members of the National Network of Women Human Rights Defenders in Honduras who took part in the activities.

The actions carried out by the women included a tour of the territory, activities for children, and activities in memory of four Garifuna men who have been forcibly disappeared—all activities were marked by art, music, and drums. “The spirituality of the Garifuna people is probably one of the most important hearts of the struggle,” Cardoza says.

The goal of the caravan was to fight the logic in which state and companies empty territories. “The patriarchal, militaristic, capitalist, and racist oppression system aims to displace people from their lands, take over them, and make people earn miserable wages, making them work in the services industry, turning them into human beings with no life projects beyond trying to secure a precarious livelihood; this is how they rob them of their time and appetite for life,” Miranda argues.

The Black Fraternal Organization of Honduras (Organización Fraternal Negra Hondureña—OFRANEH) has struggled for more than four decades in defense of land and territory, “because it is exactly, materially, and concretely the place where community life is established, where there is a pursuit of common good and happiness, the aspiration for being in a world where people are appreciated, the arena inhabited by the great spirits that protect the people,” stated the Feminist Caravan.

The community-strengthening processes of the Garifuna people therefore grow in health care community centers, in sexual dissidence collectives, in reclaiming coconut oil and ancestral food that fill the Garifuna land, and also in the resistance against extractivist companies that want to grab their territory.

“In face of the forced emptying of territories, we call Indigenous people back to this ancestral space. We call us to listen and be together, to support the struggle for life where our navel strings are planted,” the women stated. It is not a coincidence that OFRANEH has so many enemies and detractors, who use all the tools they can against organizing processes: killing, arresting, exiling, and disappearing long-standing leaders who are vital to their communities.

“We, the diverse feminists and fighters who organize with the National Network of Women Defenders, not only feel acknowledged in the struggles, but we also feel part of the aspirations and victories of the organizations. This is why today we are calling for this week at the rebellious territory of the Garifuna people, to be present, to speak with each other, to be able to learn with each other, to feel the sea breeze, and feel life ruling our days and our dreams,” they stated.

On July 18th, 2020, four young Garifuna men were brutally taken from their homes and have been missing to this day. Since then, the community has continuously demanded official explanations, but silence remains.

The women left a big memorial for the missing in the center of the community: a mural with the faces of the four kidnapped young men: Snaider Centeno, former president of the Triunfo de la Cruz Association, Milton Joel Martínez Álvarez, Suami Aparicio Mejía García, and Gerardo Mizael Róchez Cálix.

Local residents report that, at the dawn of July 18th, three trucks stormed into the community, each with a group of armed men. One by one, the four young men were taken from their homes. The operation lasted about forty minutes.

The human rights violations perpetrated against the Garifuna community of Triunfo de la Cruz were taken to the Inter-American Court of Human Rights (IACHR) in the case Garífuna Triunfo de la Cruz Community and its Members v. Honduras. The regional court held the state of Honduras internationally accountable for the violation of several rights of the Garifuna community, including the right to collective land. It also addressed the impact of tourism projects or residential projects built without the community’s consent, as it happened with the population of Triunfo de la Cruz and other communities in Bahía de Tela.

While Honduras was found guilty by the IACHR in this case, the administration of the former president Juan Orlando Hernández, who was recently extradited to the United States, did very little—virtually nothing—to comply with the series of reparations established by the regional court.

The caravan received support from women and organizations from several parts of the world, including the Mesoamerican Initiative for Women Human Rights Defenders. “The Garifuna people and the communities organized within the OFRANEH are one of the hearts of our hope. Not only because they have been facing the most destroying, violent, destructive power, the oppressive power of bad government, of extractivist companies, and their thugs and organized crime groups (…), but also because they have made true and given life to this other world that we need and dream of, bringing back Indigenous crops, community radios, traditional community health care centers, with their struggle for food sovereignty, the experience of the Faya liberated territory, with their worldview rooted in the earth, connected with their ancestors, spirituality, and art,” the initiative stated.

Originally published at AvispaMidia on May 24th, 2022.