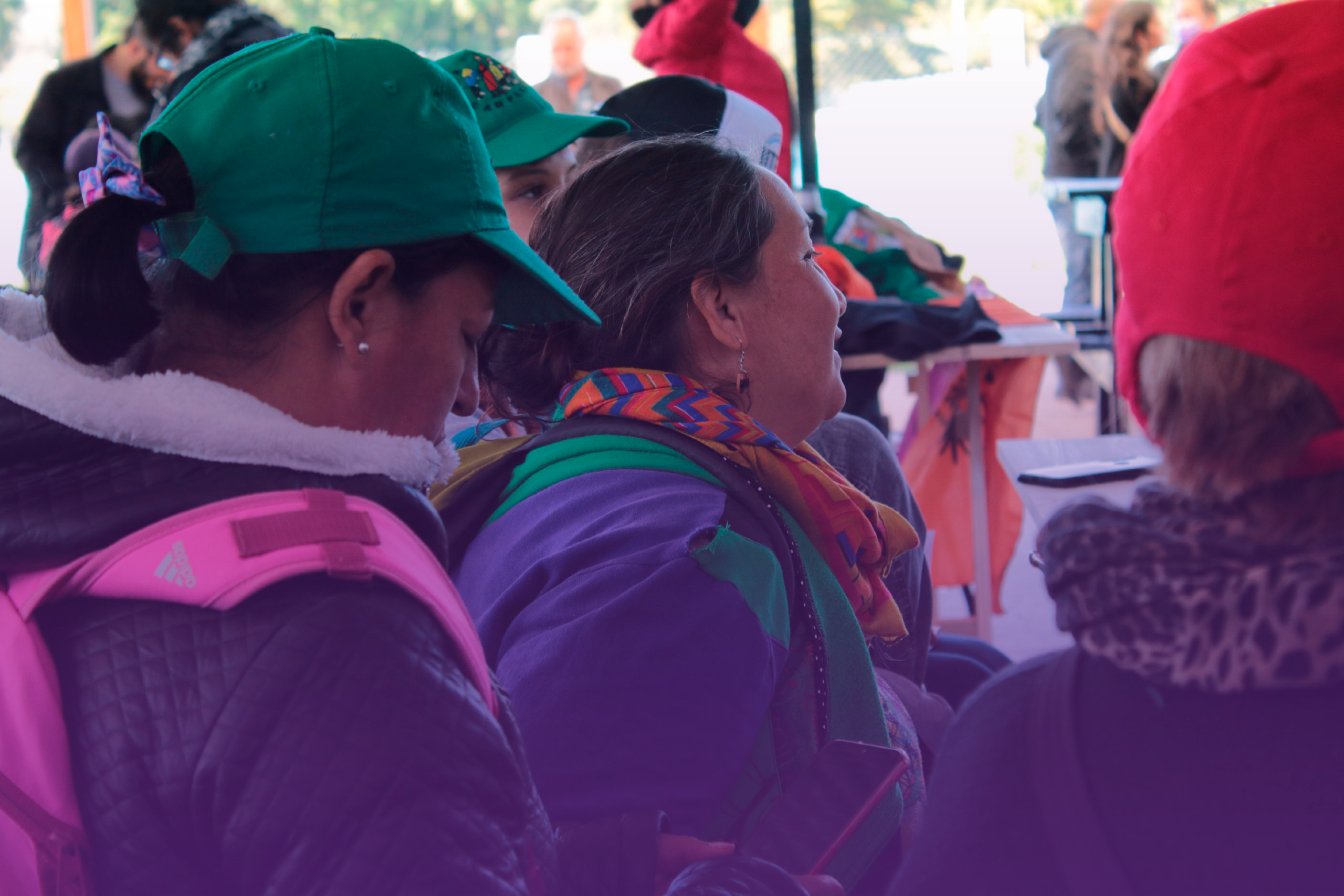 During the 3rd Continental Assembly of ALBA Movements, Capire collected stories and experiences from several women who work every day to sustain life in their communities. They are organized women in collective and community spaces, movements, as well as women who are currently taking part in institutional spaces, both in the legislative and the executive branch.

In face of the economic crisis left behind by the neoliberal government of the former president Mauricio Macri (2015-2019), as well as the difficulties imposed by the Covid-19 pandemic, grassroots feminist movements have organized forms of resistance and alternatives. Women are on the front line of this process, securing care, health, basic education, food, and family agriculture. These are the women who sustain the economy—that is, they are the ones making sure human and nonhuman lives can exist and grow.

Sol de la Torre, a councilwoman from Mar del Plata and a militant of the Pátria Grande Front and the Mala Junta collective, said that, during the pandemic, not being able to go to school has had an impact on a lot of children’s learning process. So the collective organized a “general call, and many sisters responded to it, and what we do is, we teach literacy skills to adults and we provide children and teenagers with supplemental instruction to help them get back to the school dynamics and prevent school dropout.” They also created a health care brigade, which visits provinces and territories the state does not reach, and they count on the participation of people who work as nurses, psychologists, and medical doctors.

Political education is one of the pillars of the actions conducted by the Mala Junta collective. “At our Berta Cáceres Feminist Organizing School, we have come together with the sisters who work in the territories and who often are able to receive a complementary social wage, as they are acknowledged for their work tackling violence. We also work to have care work recognized, and this is why we have come closer to the leaders of social/community and care spaces, of comedores[1], of spaces dedicated to children, of education and health care brigades: to strengthen grassroots feminism built from solidarity in the neighborhoods.”

María Rosa Domes is a member of the Evita movement in Ezeiza, on the outskirts of Buenos Aires. She is one of the organizers of a comedor popular, where she provides school support. “You have ten-year-old children who can’t read. Children who can’t write. This is very worrisome.” “I conduct didactic activities, but I do it based on learning—that is, it’s not dice games to entertain them, but to teach them letters, numbers, figures. It may seem like it is not much, but to us and our neighborhood, it is very important.”

She also said that building solidarity is a continuous effort taken on every day, and it is a task of the people: “We work a lot with solidarity. If something happens to a comrade, to a neighbor, we will be there. We see basic needs. The capitalist does not feel solidarity. People who have less are the people who foster the most solidarity.”

“The moments where we meet are fundamental, and it is fundamental for young sisters to be joining this processes, to support our argument that it is possible to remain in the territory, that you don’t have to leave the countryside, and you can continue to produce. At the same time, we can have joint efforts with sisters from other social organizations”, said Cecilia Rodríguez during the panel on youth struggles at the Assembly. Cecilia is part of the National Indigenous Peasant Movement and La Vía Campesina youth, which have been discussing food sovereignty, agroecology, full land reform, and popular peasant feminism.

“Especially in the pandemic, it was women who organized to make and hand out food. Sisters who say ‘let’s donate our foods, or sell it for five pesos,’ which is nothing here,” said Elsa Yanaje, a farmer and leader of the rural sector of the Excluded Workers’ Movement (rama rural del Movimiento de Trabajadores Excluidos—MTE Rural). Elsa lives in an area in La Plata known as “green belt,” because of its huge fruit and vegetable production all year round.

Around 5,000 families are part of the organization, which has expanded across territories and provinces since it first emerged seven years ago, as it brings together “so many sisters and comrades who experience this exclusion, of not belonging to the state as a producer, as a worker.” Organizing grassroots movements is the only way of being heard, of proposing a society that is free from exclusion. Elsa said that “we are excluded from public policies. In Argentina, every time there is a climate catastrophe that threatens production, big landowners are the first to ask for help and the first to get it. Meanwhile, the small ones are excluded.”

“Families must be ensured the ability to produce with dignity, and that has to do with agroecological production,” Elsa argued. This is why the movement has been working to organize its own seed banks, boosting experiments in sustainable biotechnology and creating spaces for political education. “The issues faced in the countryside are not faced only by those who live in the countryside, but they also involve those who buy from us, and they have to know where [food] comes from, how we produce it.”

As Cecilia rightly put it, “agreocology is not a trend—it’s a way of living, it is something that goes through those of us who have decided to continue to produce in the territory. It is shared, articulated knowledge. Agroecology is a choice that we make and that keeps our sisters and comrades healthy in their territories.”

Agroecological production requires the right to land. In La Plata, farmers very usually grow their production on rented land, with contracts that don’t give them the right to produce completely agroecologically, but rather following market demands, which require fast-paced production and pesticides. This is why she argues that “one of our struggles in particular is the right to land, as agribusiness is advancing and commercial matters are forcing us out. Productive areas are being urbanized, our production is not respected, and many of us are disappearing.”

Women’s Main Role in The Struggle and The Toil

During the panel on youth at the Assembly, Ofelia Fernández, the youngest councilwoman of Buenos Aires, talked about how important feminism is: “I think the parameters of reality, after what happened to us in the world, are not the same anymore. We are not the same anymore. We must think about where we have the possibility of reinventing or relaunching our agendas. One of the movements that has been very powerful is the feminist movement. The feminist movement drew many conclusions after the pandemic, for example, that care must be secured and recognized.” Ofelia addressed how important it is to see care as whole, in society at large, in order to appreciate and change it: “Not just care in the sense of ‘what they call love is unpaid work,’ but also community-based care, at the comedores, handing out food and meals. During the health crisis, we have seen that the most precarious labor is in the health care and nursing industries, which, not coincidentally, are the most feminized fields.”

Strengthening feminism means boosting women’s self-organizing, but also their main roles in the struggles of the people and mixed-gender movements. “We are proud to have sisters who are directors, spokeswomen, leaders all across the country, sustaining each particular production unit,” Elsa said. She argues that her organization has become more open to women in recent years, as assemblies and other spaces of participation have been organized. She added that “women are life in this sense, as they make a great effort in everything they do: resisting, persisting, being brave to say it out loud. We won’t silence ourselves anymore, and this is something we are very proud of.”

At comedores and brigades, María Rosa Domes says that men and women work together, with no discrimination. “Neoliberalism and differences are very strong in Argentina. This bothers us a lot, and this is why we try to integrate everyone. We organize spaces of political education, which are very open to the neighborhood and society. Our role is to raise awareness that we are all one.”

According to Sol de la Torre, in Argentina, work has been consistently systematized. “There is a sexual, racial, and class division that makes the important work—the ones that sustain life—the least acknowledged and the lowest paying. All education and health care work is carried out by women,” she argued, adding: “Meanwhile, with such a strong feminist movement, we have had many victories in Argentina, such as the acknowledgment of domestic workers, which goes hand in hand with a program that aims to get these women formally hired.”

Feminism is present in all of these spaces of resistance, and it is through their boldness and critical view that women integrate the struggles for the reorganization of labor and to place life on center stage. Ofelia Fernández argued, “We need creativity and self-esteem to believe that there is an alternative process for the country, the continent, and the world; to believe that we can be the generation that will build a new cycle, a new time. We are pursuing this: coming together, sharing pathways and horizons. This is a necessary contribution, a first step, but we must keep moving forward so that soon we will be able to say that politics does not have or produce misery—quite the contrary, it produces happiness.”

[1] Comedores populares or comunitários, also known as ollas populares in some Latin American countries, are grassroots restaurants created by social and community-based organizations, especially in poor neighborhoods and on urban outskirts, as a way to make sure residents are provided basic food.