Foto/Photo: No a la mina. 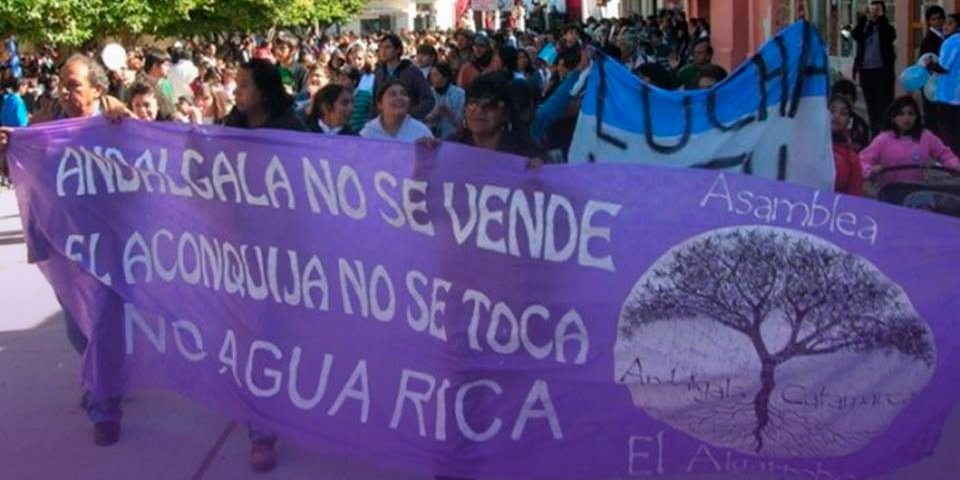 Foto/Photo: No a la mina.

Women Water Defenders in the Mountains of Argentina

In Argentinian frontline communities, women are saying, “How could we not fight? Do we dry with the land?”

Since roads have been blocked at the foot of a mountain, more than a decade ago, to this day, when open-pit mining is presented as a solution to this new crisis we face, defending water sources in the Andes has remained in force. In this struggle against corporations, the work women carry out is indispensable while very often they remain unnamed. We have taken it on ourselves to visit three provinces to echo the voices of women water guardians.

Mining is like a coin. It reflects extractivism on one face and neoliberal capital on the other. By articulating these two faces, it funds an unsustainable development model, which many usually call “progress,” marked by a ubiquitous market that makes sure transnational corporations and economic elites get away with everything and reap all the benefits, all the while threatening the rights of the peoples and nature. Governments subject public policies to this model, weakening the right to water, which is a collective right that is closely connected to community-based processes and the defense of territories and common goods.

In the north of the San Juan province, Argentina, is Jachal, a department east of a development called Veladero, an open-pit gold-silver mine. Madres Jachalleras [Mothers of Jachal] is a group of women who started to organize in this area in 2002, when the miner first consulted with the community about environmental care, even though it was already operating since 1996, without prior consultation.

“The promise of progress was everyone’s dream, because we hadn’t witnessed the impact of mining ourselves,” says María José, a member of the group. “When we would go door to door gathering signatures, the miner would follow us with TV sets, DVDs, CDs. (…) They take social workers, hire psychologists, visit people’s homes to convince them that everything is ok. (…) It’s an impressive campaign. We would ride our bikes, and they would drive big cars. That made people laugh.”

In a semi-desert area, the Jachal River was the only waterway the community could count on, and it was destroyed by the miner. First, they polluted the water. Then, the water became scarce. Finally, the groundwater was contaminated. María José’s report dates back to 2013, but in 2015, 2016, and 2019, thousands of gallons of contaminating liquids leaked in water sources, making the situation increasingly worse. Nevertheless, Barrick Gold, the transnational mining company that operates the pits, remains unpunished. Since January this year, the Jachal No Se Toca [Hands Off Jachal] Assembly, which stems from the Madres Jachalleras initiative, has been denouncing that the water distribution system that feeds local homes is contaminated with mercury and other hazardous wastes.

North of Jachal is the province of La Rioja. There, in 2012, there was a road black to stop the mining trucks from getting to the Famatina Mountain. At the camp near Alto Carrizal, the village close to the base of the mountain, a strong group of neighbors and activists were collectively keeping the road block. When we got there, we were given some assignments, including the midnight watch at a small house next to the blockade, where there was always a group of people keeping vigil nearby. This is where we met María Luisa “Boneca” [“Doll”], Daniela, María Eugenia, and many other women of all ages, who were standing guard side by side with men to defend their people’s water. Giggling, but also solemnly, they shared stories of struggle and pride for their land with us. “The mountains are ours, they are the people’s. And we will not let them exploit them. They are ours, they are like our children. When they said they were going to explore them, in 2006, I was so mad. (…) Not everyone can have so much beauty like we have here.”

In La Rioja, the miner did not pass this time, nor the times after that. Up until 2018, the community at the base of the Famantina was able to resist the implementation of operations by five mining companies. But the fight over territory is never over, because the communities live in mountains that nurture so much wealth, and they are constantly harassed by the economic power because of that.

After many attempts (and not few failures), transnational corporations now employ new strategies to legitimize their business. One of them is suggesting they play a self-proclaimed essential role in the economy, with which they could pour wealth into recovering our country in face of the COVID-19 crisis. But while they make these claims, mining companies continue to operate during lockdown, as if they were “an essential activity.” They spread the virus in Andean villages, as was the case in Catamarca. About this, Silvina, of Catamarca’s El Algarrobo [The Pod] Assembly, said, “To us, mining is not an essential activity. In fact, the first recorded cases of COVID-19 in Catamarca were mine workers. In our assembly, we consider that water is essential, not mining.”

Catamarca is a province north of La Rioja. Near it is Andalgalá, a small town at the base of the Aconquija Mountain, where 20,000 people live. Andalgalá has struggled for 20 years with mining, and it is one of the most impoverished areas in the country. In 1995, the miner Alumbrera was granted the mining concession of the company Yacimientos Mineros Aguas de Dionisio (YMAD). Bajo de La Alumbrera is the largest mine project in operation in Argentina. It has a number of reports and criminal charges against it for pollution and violation of rights in three provinces. As soon as this operation started, other projects of greater magnitude followed, all established in Aconquija.

The peoples who live there suffer ideological persecution and institutional violence perpetrated by police forces against communities. Local women denounce that they are exposed not only to the risks that come with being water defenders, but also to the risk of being held up to public ridicule by patriarchy. One member of a feminist group from the province reported, “As we speak with the women, we realize that we can achieve something, but it will be a tremendous conflict, and it means exposing them even more than they are already exposed now.”

A woman farmer from Andalgalá, who wishes to protect her identity, told us, “It is we, the peoples, who secure life, with our body and organization, with our daily work, for food, for life. This has become increasingly difficult. More and more villages are at stake because of these interests. The people have marched every Saturday for more than 11 years to protest open-pit mining and to defend water. The people organize for the cause in our routine, every day, and this is ingrained in new generations of boys and girls who incorporate these ideas.”

The fight against mining is not just about the water. It’s about the development model that embodies the unattainable “progress.” To challenge these imageries, in 2020 we interviewed people who live in the Pipanaco salt flats, in the Catamarca province. We spoke about water and their life projects. Local residents spoke about resistance and their humbling dignity, wondering, “How could we not fight? Do we dry with the land?”

A woman weaver and peasant was asked about her views on development, and she answered, “Housing first. There should be a lot more development for the most important, most necessary things.” For peasants, the connection between farming and water is essential. “The awareness that all water is related and connects the peoples, I can say that this is how it is, because producers and the people who live in these territories see it that way.”

“No one can own this owner-less thing,” Rosa, a member of the El Algarrobo Assembly, read from a poem by La Reynamora Azul during the 1st Latin-American Summit Water for the Peoples, held in Catamarca in 2018. Thousands of women are water guardians, and they are not only in the mountains: at age 87, the “mother of all battles” Nora Cortiñas, one of the Madres de la Plaza de Mayo [Mothers of the Plaza de Mayo, who demand justice for their children who disappeared and were killed during the military dictatorship in Argentina], visited Catamarca. She addressed the crowd that was taking part in the meeting with these words, “All our struggle is completely committed, and if it does not come from within, it is not worth it. (…) Today we come to defend the water. (…) People first came for our sons and daughters, and now they come for the water.” “Protest must be turned into proposals. Let no one say, ‘I’m tired’!” said the untiring militant. With her example, she inspires everyone else, as one cannot sell water, but should rather defend it!

Natalia Salvático is a water and sustainability coordinator with Friends of the Earth Argentina.