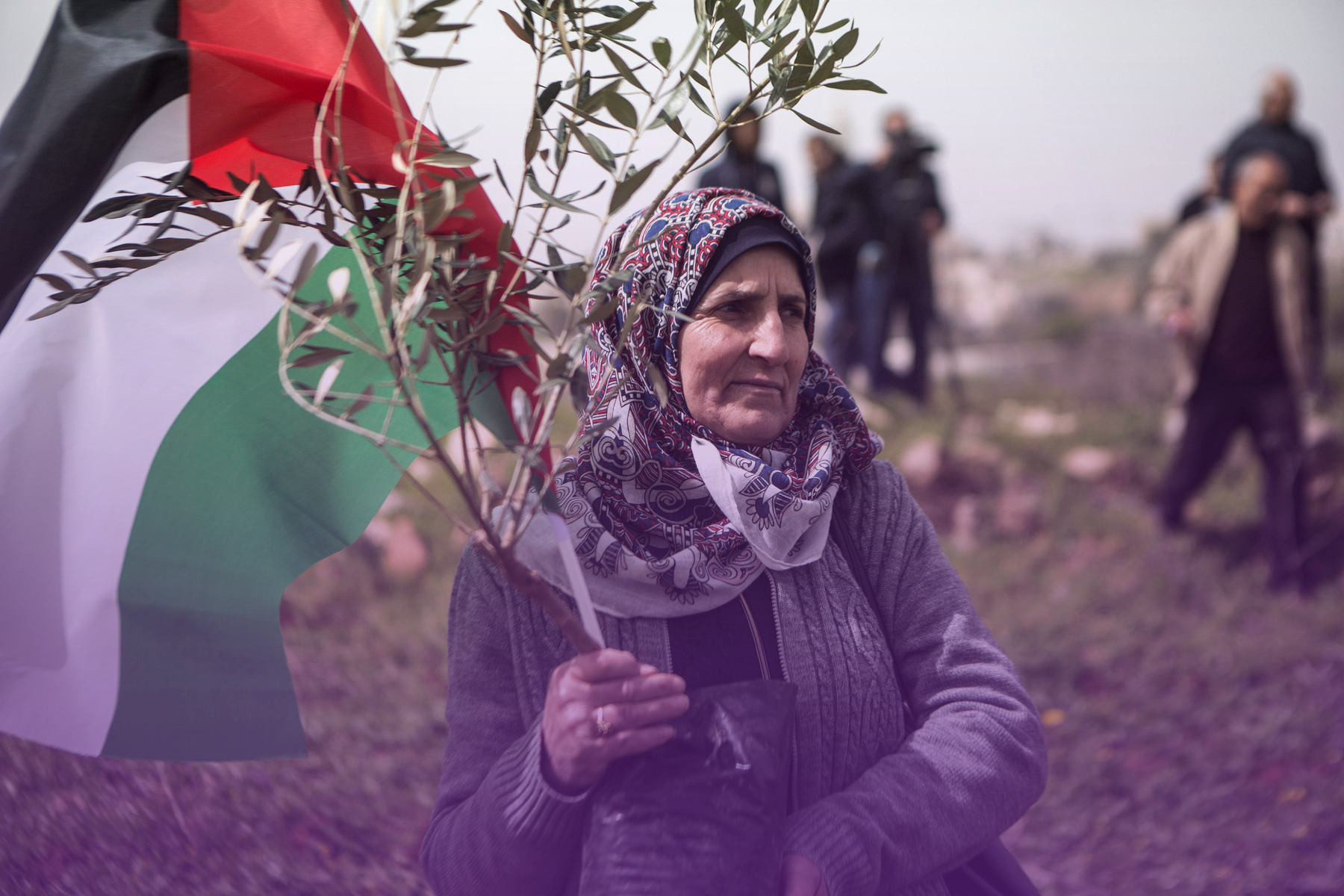 On This Palestinian Land Day, we publish the translation of an article by the leader Khitam Saafin on the struggle for land. Also available in Arabic

The conflict for land is a key aspect of the lives of the peoples. Land is the main source of natural resources and the space on which human societies have evolved. The connection with the land is an objective relationship related to the development and the continuity of our lives, whether it’s directly, an everyday connection through labor and investment in the land, whether indirectly. The connection with the land is found in political, economic, and social plans, where the issue of territorial sovereignty holds a prominent place in local, national, and international conflicts.

Capitalist and colonial powers aim to control the land through all means possible. To do so, they use several brutal methods, such as wars, massacres, sieges, sanctions, pressures, military bases, and economic policies spearheaded by capitalist cartels such as the World Bank. All this comes with methods adopted to control and dominate the peoples, who are impoverished and turn into tools to serve capitalist and colonial interests and ambitions.

On the other hand, the struggle continues for a revolutionary change based on equality, the right to self-determination and sovereignty, and the elimination of all forms of oppression and discrimination, for the sake of a world where justice prevails. Obviously, women wage this battle as sisters and leaders, in a moment where their suffering due to the various forms of persecution and discrimination is multiplied by the power of ruling patriarchal structures.

A History of the Struggle for Land

The struggle for land and existence has been the main focus of the struggle of the Palestinian people against Zionist colonization. This colonization has been based on a method that can be summed up in one sentence: “land without a people for a people without a land.” This sentence certainly originates from the colonial goals of the Zionist movement, which has worked to take over the Palestinian land and remove its people through the most heinous means.

In 1948, the Zionist movement, with the all the support from colonial powers, destroyed more than 500 Palestinian villages and displaced its residents. It was responsible for the forced displacement of the majority of Palestinians from their towns and their replacement with Zionist settlers. This is how the establishment of the State of Israel was announced in these lands. At that moment, when more than half of the Palestinian people became refugees, Zionism advanced with its plans to conclude the colonization of the entire Palestine. In 1967, waging a new colonial war, it managed to occupy other Arabic lands: the Sinai Peninsula, the Golan Heights, and parts of Lebanese lands. And it is still there, to this day, conducting operations to control lands in the West Bank, establishing settlements through military law. This is part of a number of consecutive plans, being the latest one the annexation plan announced in 2020 by the former prime minister of Israel, Benjamin Netanyahu, which aims to annex 33 percent of the West Bank to Israel.

As part of the Palestinian people who stand in resistance, Palestinian women struggle for their national land rights. They demand, above all, the right of Palestinian refugees to return to the lands from where they have been displaced, as well as the right to territorial sovereignty and access to our lands.

In the colonial reality we live, thousands of farmers are besieged and hindered, by the occupation army and settlers, from accessing, growing, and reaping the benefits of their crops, which are exposed to attacks from settlers, who burn and destroy their trees and fields. Agricultural lands in the Gaza Strip are also subjected to Israeli military attacks and, furthermore, occupation authorities also aim to undermine the capacity of the Palestinian people to benefit from their lands by controlling their water resources and stealing Palestinian water.

This way, we see that Palestinian women’s struggle for land is a struggle for liberation from colonialism and the occupation. They are, therefore, at the forefront of resistance [Sumud¹] on the land, as they persist, growing and reaping the benefits of their harvests while facing attacks by the settlers. This is clear in the important role played by women in the countryside, as they shoulder the hardest work in agricultural activities.

They are also the ones standing up against companies that grab agricultural lands to build urban developments. While the percentage of land ownership by women is reduced, as a result of the traditional and historical legacy, most women preserve the land in different ways. Additionally, women strive as much as they can to protect the land from contamination and vandalism, prioritizing the use of natural fertilizers and growing and preserving native seeds, opposing genetically-modified seeds. Women’s participation in agricultural committees and in the defense of farmers’ rights has increased, both in women’s committees and other mixed-gender committees.

Palestinian women continue to struggle to reclaim their lands from colonialism, occupation, and settlements, in pursuit of land sovereignty and land ownership rights.

¹ Sumudmeans “steadfastness” or “steadfast perseverance.” It is a Palestinian cultural value, ideological theme, and political strategy that emerged through the experience of resistance during the Six-Day War in 1967. As the term developed, the Palestinian people made a distinction between the two main forms of sumud. One, “static sumud,” is more passive and defined by Ibrahim Dhahak as the “maintenance of Palestinians on their lands.” The other, “resistance sumud,” is a more dynamic ideology, aiming to build alternative organizations to resist and undermine the Israeli occupation of Palestine. The ultimate symbol associated with the concept of sumud and the Palestinian sense of rootedness in the land is the olive tree, ubiquitous throughout Palestine.

Khitam Saafin is a leader of the Union of Palestinian Women’s Committees (UPWC) and member of the World March of Women. On November 2nd, 2020, she was arrested and placed under administrative detention by the Israeli occupation forces. In Palestine and around the world, the feminist movement demands her freedom. #FreeKhitam!