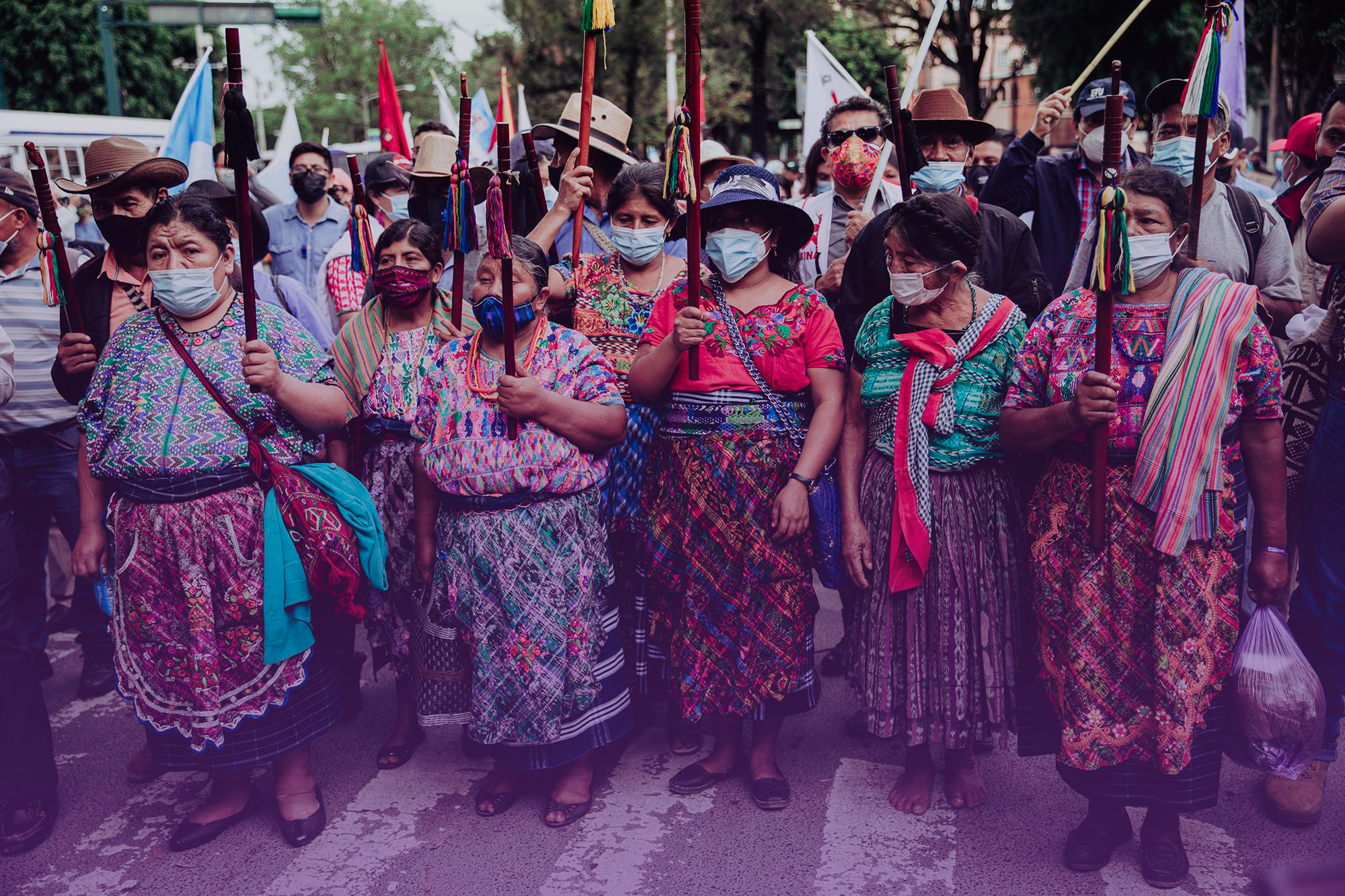 Guatemala Is Iximulew: Pushing Toward Plurinationality, Democracy, and a Decent Life

Indigenous peoples and women rise up and hold intense demonstrations against Guatemalan president, for a plurinational state.

A political and institutional crisis has been deepening in Guatemala since 2015, marked by a pact between corrupt politicians, a criminal alliance, and attacks from the most obscure and fundamentalist powers, in addition to the presence of transnational corporations in the territories. This project of death, impunity, and co-optation of the state, in turn, has been challenged by the resistance and mobilization of the peoples, women, and social movements. The peoples and movements have been historically struggling for life, Mother Earth, self-determination, and the defense of the body-land territory.

This is why we took to the streets once again on July 29th for a one-day nationwide strike for Indigenous peoples and movements who are waging resistance. The people of Guatemala – especially Indigenous people, who make up more than 50 percent of the country – have risen up to demand radical political change. The model in place right now is an institutionalized political pact that does not represent plural political actors , and it’s not a political proposition based on good living [Buen Vivir] and the free determination of the peoples. We are facing tensions amid this battle for power, both in the symbolic realm and the material realm of territorial and national institutions.

The demonstrations are calling directly for the resignation of president Alejandro Giammattei and the country’s attorney general María Consuelo Porras. Moreover, these protests expose the country’s systemic problems and showcase our proposal, from the peoples and women, to establish a plurinational state. Several nations live within the same country. Since ancestral authorities, communities, peoples, and organizations called for the one-day nationwide strike, we have been out on the streets and in different territories maintaining a continuous struggle, a well-defined route, actions of protest, and expressing our demands.

The Story Behind the Nationwide Strike

The state of Guatemala was established with a perspective that has disregarded Indigenous peoples in political and economic decision-making processes. Not only that, it has gone as far as proposing policies to exterminate them. As a response, a proposal emerged to draft a new Constitution aiming to remove inequalities.

In the past 36 years, since the latest Constitution was enacted, there has been a period of armed conflicts in the country, which in turn originated from colonial and patriarchal violence. Several uprisings took place, and in those events, the state has made sure to censor the voices of the population. After a while, democracy was allegedly implemented in our country and, since then, a president is elected every four years. However, those who run the country continue to be from the sectors responsible for the exploitation of what is left from the peoples.

In 2015, huge demonstrations took place to remove the then president, Otto Pérez Molina, and his vice president, Roxana Baldetti. They both were eventually arrested, but that didn’t lead to any profound changes in our political and social organization. We are not repeating what happened in 2015, because now propositions are much more profound. We are talking about a short-, medium-, and long-term pathway toward establishing the new state we have all been dreaming of: a plurinational state based on Buen Vivir.

While things are boiling up right now with the whole pandemic situation, it is also clear that the country has been immersed in a continuous crisis. There is nothing new about Guatemala asking for loans to build infrastructure that will never get to the population. While this is more apparent now, because of the health emergency situation, this policy has been executed by all recent administrations.

We are facing a political crisis within institutions, which affects the material and subjective conditions of the population, women, and specifically Indigenous peoples. The crisis results from a criminal alliance, a political pact that has successfully co-opted the state to establish a policy of plundering of institutions, one that becomes real in women’s everyday lives. This plundering efforts have led to many loopholes, aggravation of tax privileges, impacts on Mother Earth, and the encroachment of ways of living in different territories.

As institutions continue to be co-opted, the country’s authorities are no longer independent. The situation has become even worse when the Prosecutor’s Office arbitrarily decided to fire prosecutor Juan Francisco Sandoval, who was conducting anti-corruption investigations that implicated high ranks. For this reason, the protests reject impunity and call for transparency and the resignation of president Alejandro Giammattei and attorney general Consuelo Porras.

The offensive of the state against those who defend the people have become stronger since this administration took office, concurrently with the pandemic, and announced the implementation of several policies to remove rights. They are getting the country and the Guatemalan people into debt. The Ministry of Health has not taken on its responsibility to organize the vaccine rollout, and it is a known fact that some doses are about to expire.

The most specious alliances are being strengthened with narcotrafficking, illegal capital, and religious fundamentalists, which has led to horror, fear, hatred, and overt racism that is manifested in everyday life.

In Face of a Negligent State, Women Take Over Care

As of now, the country has reported more than 400,000 cases of COVID-19 and more than 12,000 deaths. Our health care system was not able to develop a vaccination program due to corruption and the lack of political will. Services are not able to serve the needs that have emerged amid the pandemic, and this is yet another reason why the population is fighting back. Women bear the brunt in terms of health care, because they are the ones who take care of and shoulder the responsibility for those who are ill, carry out care work, and secure the sustainability of life.

Additionally, the economic situation of the people is precarious, and indicators reflect how the state is not caring for women. Guatemala has one of the Americas’ highest rates of chronic malnutrition in children under the age of five. In the first half of 2021, more than 57,000 cases of child and teenage pregnancy were reported among 10-19-year-olds, according to the Sexual and Reproductive Health Observatory (Observatorio en Salud Sexual y reproductiva – OSAR), of which 2,737 were under 14. The high rate of pregnancy among young girls and teenagers represents the level of violence that looms over households, families, and communities.

Locally, violence against women has been on the rise, especially racist violence against Indigenous women. The access to the justice system is increasingly hard, as offices are operating under special hours. Another issue that has affected us in the communities is that daycare centers and schools are closed, which has doubled the amount of work women shoulder at home, as now they also play the role of both mothers and teachers.

There is not one national state program to end violence against women and end discrimination and racism against Indigenous communities. Their sexual and reproductive rights are more vulnerable because of transnational corporations that are set up in the territories. There is an open-pit mining operation and a militarized territory where we live. And the military does nothing but harass women, especially younger women. The criminalization of human rights defenders makes us increasingly vulnerable.

It’s precisely in these situations of rights violations that the strongest attacks happen against Indigenous people. They are vilified through misinformation, as well as conservative and racist views. The way information is disclosed is racist, as well as the way communities are treated, as we have been witnessing with the access to vaccines among Indigenous peoples.

The participation of Indigenous women and feminists from movements in general has been crucial to strengthen alliances and acknowledge the huge diversity of organizations and calls for action, appreciating our spirituality. Mayan ceremonies have been held to consult the most auspicious and appropriate moment to take action.

Indigenous women are directly struggling against racism, because our lives are deeply affected by systems of oppression. They strongly reject our ways of living, dressing, eating, and speaking, and this is why we defend our collective knowledge, by organizing expansive spaces of reflection in society to position our struggles, bids, and propositions to live a full life. Defending collective rights and the commons is part of the integral nature of how we organize.

Right now, in the student movement, our sisters are calling for action, making statements, speaking about their reality, and supporting the struggles of the peoples. This is something new in the past twenty years of movement organizing in universities. After the war, there was demobilization and the youth had to restore their spaces with new forms of organizing and making denunciations. This is why art interventions are part of the mobilizations today. Sisters and comrades paint the streets, create mosaics, and carry out new forms of collective action. In 2015, each individual took their own little poster to the streets, but now this new wave of protests is being organized through more concrete and collective discourse and practice.

We join the actions and propositions of the peoples in the Plurinational Assembly and, through feminist collectives, we are pushing for a plurinational, anti-patriarchal state. Disrupting patriarchal paradigms to promote a national anti-patriarchal movement is very complex, but we are nevertheless bringing the proposition to the table and spaces where discussions are being held. New women student leaders are also talking about the violence we are subjected to in mixed-gender social movements and about how they will not tolerate comrades who claim to agree with us, yet perpetrate acts of violence.

But how can we sustain life amid so many setbacks against human rights? At the Political Alliance, Women’s Sector (Alianza Política Sector de Mujeres – APSM), which is part of the World March of Women, we offer different feminist and plural bids, bringing together the struggle for our territories and international solidarity. Our process of alliances is based on principles and consensus building toward plural political actors that can promote a project for change. As movements organize together, they are able to strengthen grassroots power when there is collaboration and a shared political pact, despite tensions that may exist between different organizations. There are common aspects that unite our worldviews and movements: we want to expose racist actions and political violence, and we want to restore political propositions pushed by Indigenous women toward emancipation.

Aurora Monzón, Esperanza Tubac, Isabel Saenz, Karen Molina, María Velázquez, Milvian Aspuac, and Tita Godínez are members, activists, and defenders of the Political Alliance, Women’s Sector (APSM), a self-organized movement in resistance that is part of the World March of Women in Guatemala. Their actions are dedicated to defending life, human dignity, and a harmonious relationship with nature.