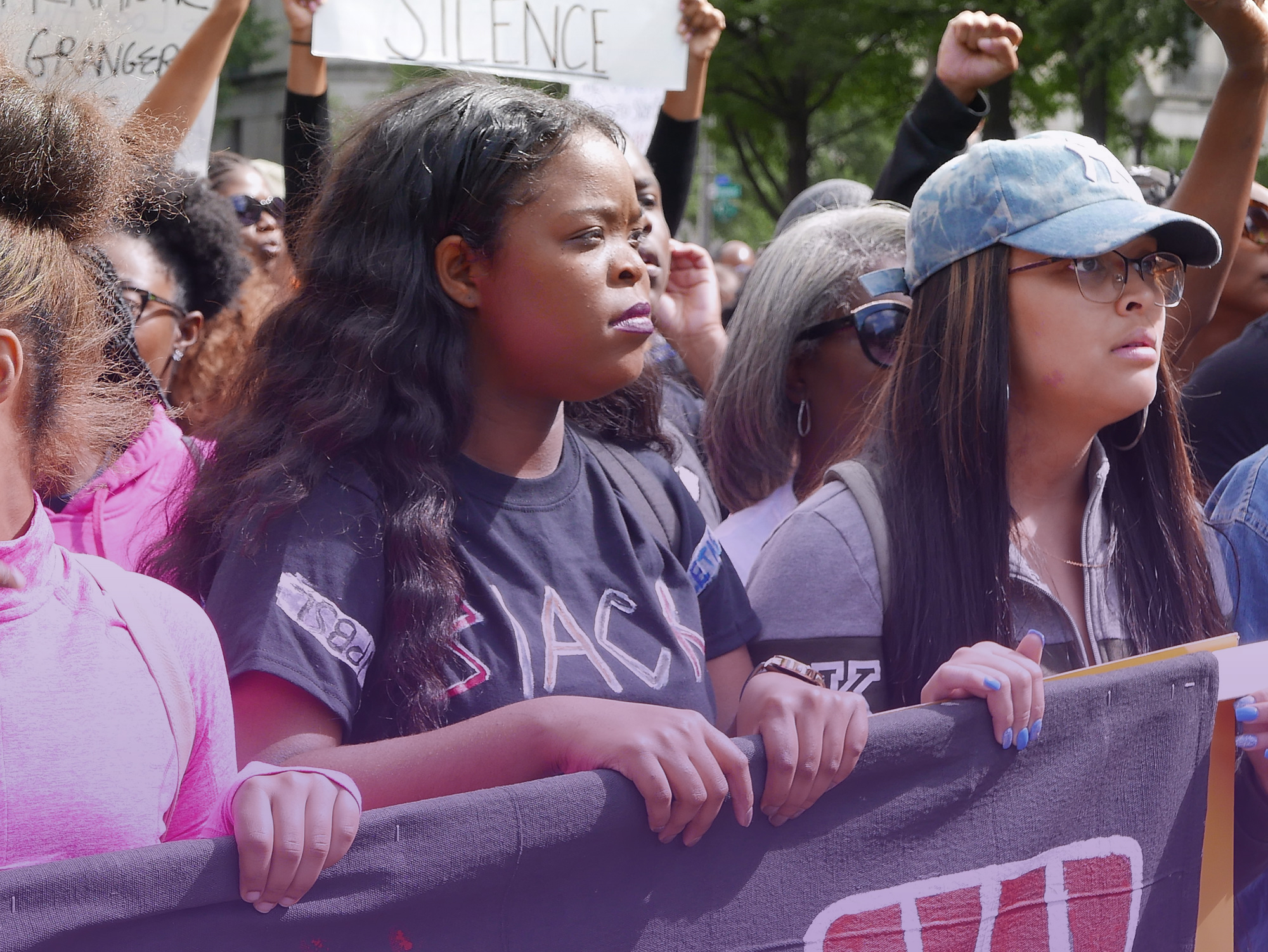 Read and listen to the words of Claudia de la Cruz, of the International Peoples’ Assembly, from her contribution at the “Challenges of Grassroots Feminism” Webinar

The neoliberal model has been disturbing and debilitating the peoples’ possibilities to overcome what has been this convergence of crises. It’s important to understand and continue to underscore that neoliberalism has created the conditions for the economic, political, and social collapse we are witnessing right now. And this pandemic, the health crisis that overwhelms us on a global level, has sped up these processes.

Globalization and the application of the neoliberal model have stolen, from States, the possibility of appropriately responding to the crisis. This is an economic and political model that promotes privatization and austerity and reduces social investments, making unions and social organizations weaker and creating conditions that make the peoples unarmed and unable to overcome any crisis.

Increasing poverty, gender-based violence, the growing overburden of care work, with the conditions created under capitalist logic and amid the health crisis, have made this reality even harsher for poor, working-class women around the world.

The populations of Black, Indigenous, and immigrant women are even more vulnerable and at an even greater disadvantage anytime there is a crisis, because of the history of slavery and colonialism that precedes us. As Karin mentioned, the systems of exploitation and extractivism have been historically used to nurture the brutality of capitalism and turn human beings and Mother Earth into production objects.

In the 1930s, Claudia Jones—a Communist journalist from the Caribbean who was persecuted by the United States and deported to England, where she died and was buried next to Karl Marx—spoke about the intersection of obstacles and conditions of poor working-class Black women under capitalism. We live at this intersection with multiple obstacles preventing us from moving forward with our lives in a dignified way. We experience prejudice based on race, gender, ethnicity, and more, while we navigate through systems and institutional structures in which exploitation, discrimination, and inequality maintain the status quo.

We must recall that, before the global health crisis, women earned 75 percent of what white men made, while Black women made 60 percent of what white men were paid. We must recall that, in 2019, the world’s billionaires—which are only 2,153 people—were richer than 4.6 billion people. The world’s richest 1 percent hold more than double the wealth of 6.9 billion people. Twenty-two of the richest men on Earth have more wealth than all women in the African continent. Globally, we, women, do three quarters of the unpaid care work and make up two thirds of the paid care workforce. At a global level, the care work that women carry out since we are 15 years old is worth at least US$10.8 trillion dollars—that’s three times the size of the tech industry.

Nearly 510 million—that is, 40 percent of all women who are employed in the world—work in the four industries that have been most severely affected by the health crisis: hotels, restaurants, small businesses, and manufacturing. Women also make up the vast majority of domestic, health, and social workers, facing a greater risk to get COVID-19 and lose their source of income if they get infected. They are also less likely to have access to social benefits.

Particularly Black, Indigenous, and immigrant women play a fundamental role in the kinds of work mentioned earlier, maintaining the economic stability of families and communities. Therefore, understanding the impact of COVID-19 on these groups is crucial not only to overcome this current crisis, but also in order to be able to move forward in our class struggle. In the United States, women, particularly in Black and Latino communities, have organized life since before the pandemic. What this pandemic did was push for reorganizing and, in a way, also overburden women in terms of work and leadership in survival projects, to be able to provide food, to protect housing—a very serious topic here in the United States. In impoverished communities, the struggles against high rents have been re-emerging, demanding to cancel the rents. Women are providing care in the personal, political, and professional realms. Overload is even higher than it used to be.

Nevertheless, the public discourse regarding the most necessary interventions usually disregards the cascading effects of the pandemic on Black, Indigenous, and Immigrant women, leaving them out of the political debate about the actions that should be taken to support families while “revitalizing” the economy. There is nothing new about that. It has happened before and it has been the M.O. of the neoliberal capitalist State in the United States and other countries that have adopted this model. It was actually the actions of neoliberal States to make the peoples invisible that led to the 2019 worldwide protests. We must make our people remember that as part of our political education processes in the territories, because the narrative is that this whole debate was just created with the health crisis.

During the grassroots protests against neoliberalism in 2019, women played a key role, as we denounced the brutal policies adopted against our working class in Haiti, Puerto Rico, Chile, Ecuador, in African countries, and India. We, Black and Indigenous women, were there. During the massive anti-racist protests in mid-2020, which went on for months and became international after the murder of George Floyd and others by the hands of the police, women were at the frontlines of these anti-racist protests. That means that, even when bourgeois policies are trying to annihilate us, make us invisible, and push us deeper into poverty, we persist and continue to be part of a history in movement that is anti-racist, anti-capitalist, anti-patriarchal, and anti-imperialist.

Our presence and persistence must be amplified by grassroots movements, especially in a context in which the capitalist bourgeoisie is “becoming diverse” and attacking us massively and ideologically.

In the United States, we have our first Black women as vice president, Kamala Harris. For years, the ideological apparatus of the bourgeoisie and the State force have been working to disturb a class movement in this country. They try to replace it with several identity movements—that is, there is the women’s movement, the immigrants’ movement, the LGBTQ movement, the environmentalist movement, all separated, with no class consciousness, competing for financial support. This financial support is mostly controlled by the Democratic Party and its foundations. And what does that have to do with Kamala Harris? Well, the historical process of appropriation of the language of movements and its depoliticization has resulted in a huge setback for our political organizations.

What we understand as anti-racist struggle cannot be depleted of its anti-systemic political history and content. It cannot be separated from class struggle, from the anti-patriarchal, anti-racist, and anti-imperialist struggle as we have historically known it. This is why I mentioned Claudia Jones, and there are many others that we can look back to in this process. A competition has been created between struggles. Who deserves more support? Who deserves more visibility? There has been a great division and an extremely deep fragmentation of what could be a solid movement in this country, with the characteristics that we must amplify.

There are those who celebrate Kamala Harris’ victory without acknowledging that it’s not a win for the working class, for Black and Indigenous people, not even for women, because her political stance has always been to push a capitalist agenda, against those very identities she evokes. A Black woman and a child of immigrants, she is responsible for incarceration policies and laws that have been crucial in the persecution and mass incarceration of Black and Latino youths.

During this time of crisis, these traps become much more dangerous than during any other time. It’s important that, as social movements, we are able to strengthen ourselves in the battle of ideas and to understand how the bourgeoisie is, at an international scale, using a language that is much closer to ours to foster their agenda.

There is a feminism that is elitist, Eurocentric, and imperialist. Every country has their own Kamala. There are nonprofits, churches, and state-run organizations that push an agenda that continues to divide and aggravate the terrible conditions that we experience as working-class women. And there is a diversity of people and businesses that look like us, for the color of their skin, for their gender… But their agenda belongs to the bourgeoisie.

As we organize with the International People’s Assembly and the Popular Education Project in the United States, we understand that it is very important to contribute to strengthen a feminist movement that is connected to working-class struggles. A movement that demands women’s rights and sexual diversity rights in territories and at an international level. One that is internationalist and anti-imperialist. One that opposes the wars, the spoliation, the blockades, and the sanctions against our peoples. A movement that contributes and strengthens solidarity campaigns with the Cuban and Venezuelan people, with our sisters in Iran and Palestine. A feminism that defends peoples’ sovereignty and their processes is fundamental. A movement that acknowledges how valuable and important multiculturalism is from a perspective of equality and a historical, radical legacy, not from paternalism and liberalism that they try to insert into movements.

We believe that it is essential to strengthen ourselves in the battle of ideas and to fight the bourgeoisie’s ideological attacks, which claim that we don’t have to worry about creating a new normal outside capitalist logic—because they, the bourgeoisie, offer us “inclusion,” “diversity,” and “representation.” It’s important to reinforce cadre training, so that our organizations and social movements have more and more women in leadership positions, with political clarity, connection with the communities, and ability to be political subjects. Creating tools for this battle is important—from independent media outlets to cultural-political interventions in public spaces, in territories and everywhere.

The conditions under which women live and the diversity of the working class, of Black, Indigenous, and immigrant women, help us understand what the task is in the struggles against patriarchy, capitalism, racism, and imperialism. They also help us to create connections and strengthen political organizing. The convergence of crises has brought a lot to the fore. This gives us a historic opportunity, because while we are sure that what we have accomplished with great effort through class struggle could be set back, we are also sure that, with purpose, organization, and strategy, we are able to position ourselves to move forward and become stronger.

From our spaces and efforts, the struggle against patriarchy is fundamental, as is the anti-imperialist, anti-racist, anti-capitalist struggle. We cannot let them separate from each other, because doing so is yielding to the bourgeoisie. This is a battle between life and death. Our struggles are intertwined and the radical view toward the future is one: total structural change of the political and social-economic systems that do not ensure development, good living [buen vivir], equity, dignity, and the protection of Mother Earth and humanity.

Claudia de la Cruz is a member of the International Peoples’ Assembly and of the Popular Education Project in the United States.

This is an edited version of Claudia’s contribution during the international webinar Challenges of Grassroots Feminism, called by the World March of Women on February 23rd, 2021.