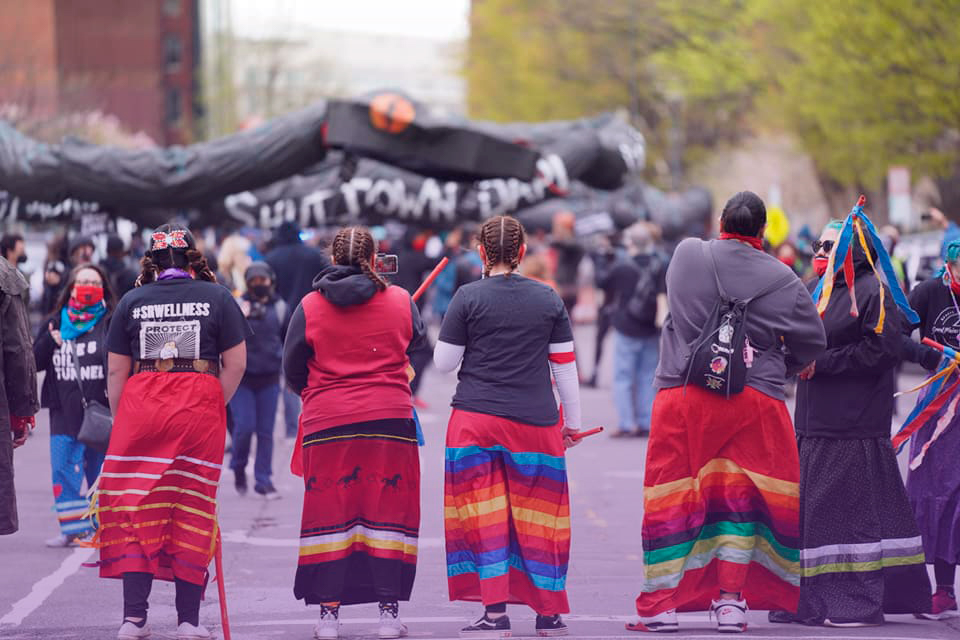 Free, Prior and Informed Consent: A Tool For Indigenous Self-determination

Indigenous feminists and their struggles for the right of existence and for power over their land and resources.

Free, Prior and Informed Consent (FPIC) is the right that an indigenous nation, group or community has to determine their development and their right to exercise self-determination in the face of governmental and corporate decisions over their territories. It’s free as in being without force or coercion, informed by given all of the information and context, prior by being before any project has happened, and consented by respecting the permission, or lack of it, given by the communities. This text was written with information from the webinar Indigenous Feminisms: Free, Prior and Informed Consent by the Indigenous Environmental Network (IEN).

Even though this right has been recognized in the United Nations Declaration on the Rights of Indigenous Peoples (UNDRIP), indigenous groups and movements from all over the world still have to fight to have it guaranteed. The discussion around FPIC is important for indigenous women because it gives perspectives not only of protection of the land, but also of protection of each individual body. In order to make sure that governments will protect indigenous communities, this right have been defended in the THRIVE Act, pushed by the Indigenous Environmental Network to recognize the duty of the Federal Government of the United States to implement a fair and just economical agenda.

How are FPIC and feminism connected?

For Ashley Nicole Engle, from IEN, “indigenous feminism means our ability as indigenous women to really reclaim our identity and our traditional roles in the society”. The term “feminism ”, though, was only used by indigenous women a few years ago.

“In the last 20 years there has been a movement of indigenous women demanding the right to use the term ‘feminism’ and it has been expressed in different ways, as community feminism and indigenous feminism. I think there is a whole effort of indigenous women to build this concept of feminism, to struggle and to work towards equal gender relations in the community”, explains Myrna Kay Cunningham, a feminist leader from the indigenous Miskito community of Waspam, Nicaragua.

Patriarchal colonization took over the Americas, threatening and attacking indigenous communities. That still affects women’s lives nowadays. Indigenous feminism came then as a women’s self-determined perspective of how their living should be. By defending the well-being of the community, indigenous feminists struggle for Free, Prior and Informed Consent because of their awareness on the impacts of highly oil and gas based economy in their lives. “By codifying FPIC, we can help ensure that a culture of consent with indigenous peoples in our nation becomes normalized, which will mean no more illegal pipelines, and the decrease in missing and murdered indigenous women, children and relatives”, says Ashley.

How has it being applied in the Americas?

Nowadays, the concept of “meaningful consultation with tribal nations” is being used by the Biden administration in the USA. This type of governmental practice leaves federal agencies to decide how people will be consulted on matters that affect them directly. Far too often, the consultation will be placed as a substitute for consent, even though they are not equivalent practices.

“Biden administration is more receptive to hearing our voices and partnering with us in these policy making. The flip side of it is that we are dealing with a neoliberal agenda, so our advocacy is even more important. They delivered that executive memo on meaningful consultation, but we need to push beyond. We have to make sure that FPIC is codified into federal law so our inherent rights as indigenous people are protected ”, explains Ashley.

In Latin America, very few countries have specific legislation on Free, Prior and Informed Consent. In Nicaragua, since 1987, the Constitution establishes that any type of work and exploration over natural resources should be approved by the people from that territory. This process begins at the community level, moves to the territory that unifies several communities  and then goes to the regional government, where the decision is taken.

These types of practices are not common for most of the countries in the region. The countries that have ratified the European Convention 169 on the Indigenous and Tribal Peoples from the International Labour Organization are able to legally reduce that right. These countries only accept consultation, and not FPIC, as a way of making agreements with indigenous communities.

Consultation doesn’t mean indigenous communities power to self-determinate about their territories, politics and economy. It’s just an strategy used to put on a democratic coverage over big corporatist projects. In such cases, transnationals corporations operates along with the State to push forward exploitative projects, promoting manipulation, disinformation, territorial divisions, leadership co-optation, among other mechanisms.

Free, Prior and Informed Consent: protection of land and body

FPIC is a people’s answer to the exploitative practices and extractive projects that invade, captivate and contaminate territories. It is the demand for people’s participation in these decision-making processes that will impact their land, communities and future generations. The powerful colonial institutions will have to lose the power they stole from indigenous communities and nations.

FPIC also stands for the sovereignty over their bodies and freedom. “When we say ‘protect body and protect land’, it means that this body cannot survive if it’s not part of the relationship that we have between people, nature and the spiritual world. We think of the different aspects of this person. It’s not only, for example, reproductive rights… We’re talking about the right to use your language, to practice your spirituality, to be a member of the community. That’s an important lesson that indigenous women have been teaching”, says Myrna.

Talking about Free, Prior and Informed Consent means, also, to define actions to ensure that women voices will be heard. For Myrna, the indigenous feminists work has an important role in changing oppressive cultural practices against women. Protect the land means to protect the body and “the whole intangible aspect of relationship that is the basis of indigenous peoples culture”.

Another aspect of the indigenous feminism is to expand the perspectives about violence. Violence against nature is violence against indigenous people. Feminist’s struggles for Free, Prior and Informed Consent is the pathway toward restoring indigenous autonomy, addressing colonial abuses and ensuring that people have healthy land, air and water for many future generations.