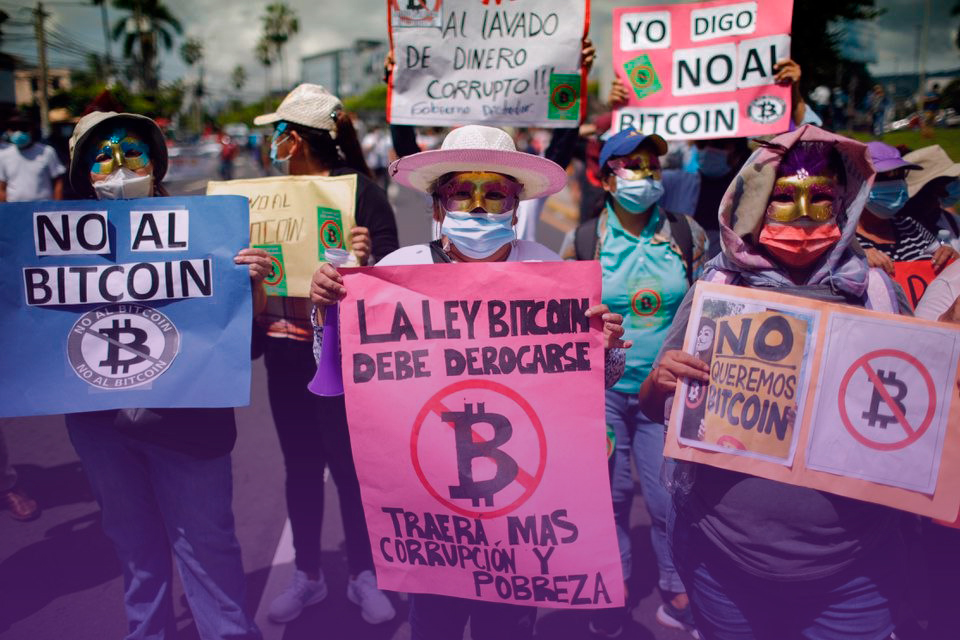 El Salvador Against Bitcoin, the Poverty of Many, and the Economy for the Few

El Salvador is the smallest country in Central America, meanwhile it’s one of the countries with the highest population density in Latin America. The government is run by president Nayib Bukele, of the New Ideas [Nuevas Ideas]party, who have garnered enormous popularity after supposedly attacking the corruption of the right-wing Nationalist Republican Alliance [Alianza Republicana Nacionalista – ARENA) and of the left-wing Farabundo Martí Front for National Liberation [Frente Farabundo Martí para la Liberación Nacional – FMLN]. Along with his multimillion-dollar hate campaign came the political persecution of former FMLN government officials. He started to persecute NGOs that used to receive public funds in order to operate, accusing them of corruption and being front organizations, without presenting actual evidence to back those accusations.

In the February 2021 legislative elections, the Nuevas Ideas party won a qualified majority of members of Congress (56 out of 84). Currently, the country has been experiencing social and political tensions. On May 1st, inauguration day for the new parliament, the five judges from Supreme Court Constitutional Chamber and the attorney general were abruptly and illegally dismissed and replaced by new officials who are loyal to the current government.

For decades, El Salvador has been experiencing several crises that overlap and aggravate each other. Added to the social, environmental, and economic crisis is the health care crisis caused by COVID-19, generating a profound impact on local economies. Major sectors of the population have lost their livelihoods, and precariousness and extreme poverty have gone up. Hospitals, which are unable to care for COVID-19 patients, are struggling to care for patients with other illnesses.

Online classes are overwhelming mothers, as they now play a double role, including a role as teachers. According to the Salvadoran Social Security Institute [Instituto Salvadoreño del Seguro Social], in January-June 2020, the country has lost 69,118 formal jobs. Before the pandemic, one in every three women had a job, but after day care centers, schools, and economic activities shut down, this number has decreased even further. The El Salvador Chamber of Commerce and Industry [Cámara de Comercio e Industria de El Salvador] estimates that 50 percent of formal jobs have been affected by activities that shut down, mostly impacting low-income sectors, as they have seen an estimated two-decade setback in the efforts to fight poverty. The Salvadoran Foundation for Economic and Social Development [Fundación Salvadoreña para el Desarrollo Económico y Social – FUSADES] estimates that the country’s level of debt will surpass 92.6 percent this year.

Amid all this reality, women have to endure different kinds of violence: with COVID-19, with rape and sexist violence, and with institutional violence perpetrated by the Nayib Bukele government. Homicide rates are reportedly going up, especially femicide rates, across the country. Meanwhile, the government is neglectful and trumpeting its “successful” plan of territorial control.

Lockdown measures have led small and young girls and women to live with their abusers 24/7. Health Ministry data show that, in the first quarter 2021, 138 pregnancies have been reported in 10–14-year-old girls, and 3,555 pregnancies have been reported in 15-19 teenage girls. In January-April 2021, the Inter-Institutional Technical Panel on the Reconciliation of Numbers of Homicide and Femicide Victim            [Mesa Técnica Interinstitucional para la Conciliación de Cifras de Víctimas de Homicidios y Feminicidios] reported 47 femicide cases, and the Attorney General’s Office reported 96 women missing in the first two months of 2021. One of the most wildly known cases of a missing person was Flor García’s, whose body was recovered from a warehouse in Cojutepeque. Her family had pressured authorities for months to find out what had happened to Flor and conducted a media campaign that echoed across the country and abroad.

Another aspect that has sparked outrage and fear among the population was that several clandestine cemeteries have been uncovered. The most infamous one is located in the municipality of Chalchuapa, where a huge number of bodies was found. Prosecutors and the police have reported that most of them were women, which increases the number of femicide reports in the country. A former police officer identified as Hugo Ernesto Osorio Chávez is accused of having committed these crimes.

El Salvador has a high homicide rate: by March 2021, the estimated rate was of 19.7 homicides per 100,000 people. According to the government’s narrative, homicides in the country have decreased by 65 percent as a result of the implementation of their territorial control plan. However, extortion and other forms of violence remain the same, and gangs seem to continue to control several territories, likely in a pact with the government. We believe other crimes are being perpetrated, especially disappearances, mostly against young people who are eventually found dead.

The Salvadoran People Rise for an Economy for Life

With a qualified majority in Congress, the president has been introducing several bills to the Legislative Assembly, such as the “bitcoin bill,” which was passed and came into effect on September 7th.

El Salvador has become the world’s first country to adopt a cryptocurrency as legal tender. An app called Chivo Wallet was created as part of the rollout, which leads to distrust and insecurity, because it violates users’ private information. To use this app, people are required to have internet access, and most people, especially in rural areas, don’t have that kind of access. In short, this virtual currency is not for the majority of Salvadorans. Bitcoin could foster speculative attacks that can lead to chaos in the country’s monetary system, which could possibly affect savings, pensions, and wages. People are not happy with this measure.

This is why the September 15th march was the biggest demonstration of the past 30 years, held by several different organizations and people from all social strata.

A year ago, the Grassroots Rebelliousness and Resistance Bloc [Bloque de Resistencia y Rebeldía Popular – BRRP] did not exist. It was born as a response to the repressive actions of the Nayib Bukele government. Within months, it has been able to unify, under one cause, the demands and slogans of 36 organizations, including unions, judge associations, student associations, feminist organizations, and the small farming sector.

The September 15th march brought together the “judges for the Constitution,” dozens of judges who are outraged with Decree 144, which has exonerated at the stroke of pen all judges over 60 years old or who have served for more than 30 years, which means one third of the country’s judges.

This was the first successful march held by this organization, joined by more than 20,000 people. That same afternoon, the rally led by Nayib Bukele to celebrate the Bicentennial of Independence was broadcast on national television, with a previously recorded message, displaying a stylized, military-infused performance. In his rushed speech, Bukele dedicated a few words to the march: he called it political and reduced it to an act of vandalism.

On October 17th, a second protest was held against Bukele. The government tried to stop the grassroots march using the Civil National Police [Policía Nacional Civil – PNC], which arbitrarily arrested the buses who were driving from different areas of the country to join the protest. Agents in at least 21 checkpoints stopped buses driving protesters from places such as Chalatenango, Suchitoto, Sonsonate, Izalco, Ilopango, and even from San Salvador. The checkpoints surrounded the capital city, and as reported by people who were affected by them, the goal was to delay their arrival at the march: “they recorded all of us. They made us get out. They put our hands in our heads. We were basically taken back to the 1980s, when repressive agencies, the National Guard and the Treasury Police[1], carried out this kind of crackdown on the population… The president claims there is no dictatorship, but there is repression.

Adding to that is the demands by war survivals with disabilities. Their situation has become unstable, as they have been waiting for more than a year for the nomination of a new chair for the Protection Fund for People with Disabilities [Fondo de Protección de Lisiados y Discapacitados – FOPROLYD], which has led to delays in the provision of services and benefits. Most war survivals with disabilities are older adults whose livelihoods are through farming and the informal sector, and they have been enduring months without adequate health care or income beyond a small pension the state has granted them in previous administrations.

In times of so many forced disappearances and the pandemic, families and communities have been grieving and hurting collectively. The crackdown remains, and many people are afraid to protest. When we are alone or not united, we become weak. We must unite, all of us, and strengthen alliances between environmentalist, feminist, and small farmers’ movements.

[1] The National Guard and the Treasury Police were dissolved after the peace accords. Along with the National Police, they were El Salvador’s primary law enforcement agencies, reporting to the military. In the 1980s, they were used during the war to fight the government’s “ideological enemy.”

Ana Isabel López lives in San Salvador and is an organizer with the Women’s Salvadoran Movement [Movimiento Salvadoreño de Mujeres], a member of the World March of Women in El Salvador.