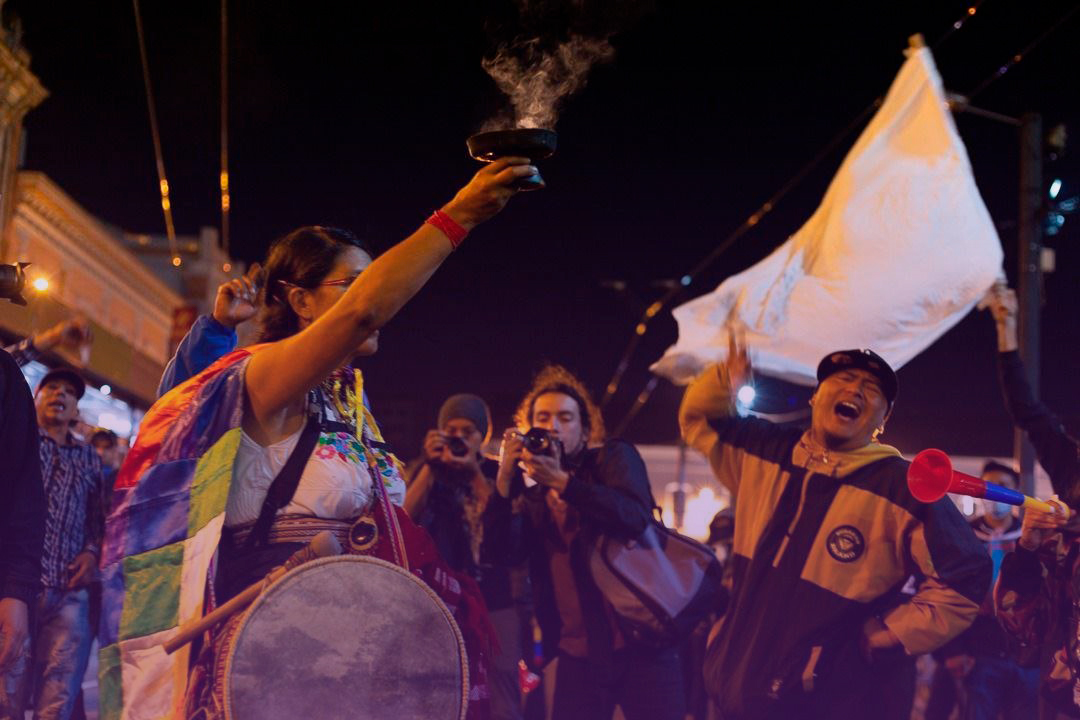 The word “estallido” (outbreak), used to characterize the historic social protests that took place against neoliberalism in 2019, is once again emerging this June. A grassroots mobilization has been taking over Ecuador for two weeks, and it has been upheld regardless of the repression that so far has left two dead and dozens injured, in the capital Quito and other parts of the country. In this scenario, some conditions are similar to those of the previous estallido while others are new, as uncertainty prevails amid political turmoil and a profound social crisis.

The call for a nationwide strike made by the Confederation of Indigenous Nationalities of Ecuador [Confederación de Nacionalidades Indígenas del Ecuador—CONAIE] and the mobilization of its members both in their territories and the capital city are at the core of the protests, which also include many other sectors: students, health care and transport workers, peasants, women, small business owners, rural and urban residents, and so many others. A people cornered by the reinstatement of neoliberalism, who feels ripped off of their chances of having a homeland, a reference of belonging to a place and to a collective that builds shared conditions of existence and life projects. Public institutions, defaced by the “anti-Correa”[1] offensive since 2017, have now become the opponents of a people that is exposed to economic and social neglect, repression, lack of security, and violence.

It has been a year since the banker Guillermo Lasso took office and five years since his government plan has been implemented—because the unspeakable Lenín Moreno, who had been elected thanks to the grassroots support to the Citizen Revolution, adopted in 2017 the government plan of the opposing party (the CREO movement, which brings together the country’s center-right and right), making room for the right to take over again and subsequently leading to a neoliberal and anti-state turn. As a result, to claim that the country is now bleeding is no longer a metaphor. More immediately, there are those who have been killed and injured in recent days by the hands of “law enforcement forces,” which are effective when it comes to repression, but unable to control prisons, where horrific massacres happened last year, or to make sure the streets are safe while the population struggles with unprecedented escalation of crime seriousness, armed gangs, and sicarios.

The connotation of wound is also related to the troubles faced by most families in terms of work and life, in a scenario that has been aggravated by the pandemic and procyclical and austerity policies. In 2020, the country’s GDP dropped 7.8 percent, and it is not expected to recover to previous levels; unemployment and underemployment have been on the rise, along with an unprecedented inflation trend in times of dollarization. Social protections have been reduced to a minimum, and public services such as health care and education have been subjected to budget cuts and increasingly precarious conditions.

But that is not all. The current neoliberal saga repeats the same measures that have driven an extreme crisis at the turn of the century, marked by the collapse of the banking system, dollarization, and mass migration. The actors and agendas of that time are back now, like living dead. While Lasso himself is a banker who thinks he is all that in this context of speculative fraud, his government team has brought back figures from that time, who are in many aspects lagging behind the country’s current reality and pressing matters.

The gap between the country’s needs and the government’s inclinations is palpable and apparent for the population, because the facts speak for themselves. For example, on the same day in May when a new massacre left 40 incarcerated people dead (raising the number of deaths to 356 this year alone), it came to light that the bank owned by Lasso grew by 123 percent last year. Meanwhile, he was in Israel as the first ever Ecuadorian president to visit it, presenting an unsettling agenda regarding security, business, and other matters.

In the stage of the capital-life conflict we are now back in, necropolitics is lurking. During the first stage of the pandemic, while advance payments were made for our foreign debt, Guayaquil was full of dead bodies on the streets. In his annual administration report, Lasso underscored that we, 18 million Ecuadorians, owed our lives to him because he implemented a Covid-19 vaccination plan, while also depicting advances in the privatization of public goods and services as great results. Now, as the nationwide strike is underway, a decree was issued to expand layoffs and reduce wages in the public sector.

The ten points presented by the CONAIE as demands to the government include the most critical and sensitive aspects for the population: fuel prices, moratorium and renegotiation of personal and family debt, fair prices for peasant production, promotion of employment and labor rights, restrictions to mining and oil extraction, respect to collective rights, no privatization of strategic sectors and public properties, control over basic prices and speculation, more budget for health care and education, and effective security and protection policies.

While the social demands are beyond any differences, contradictions prevail when it comes to politics. A sector of the Pachakutik[2] party maintains an alliance with the government, as it did in the past. Repression and persecution interfere with conversations and negotiations, and the experience from 2019—when the 12-day social struggle was watered down on the negotiation table and the government agenda at the time was ultimately imposed—is happening again. Another point on the agenda is the activation of constitutional mechanisms to dissolve the government[3], in which we bear the risk of being accused of “plotting a coup” and consequently being legally persecuted, as it happened in 2019. A political solution for the crisis is therefore necessary, but its outlines are unclear at the moment.

Destaque: How is it possible that a country acknowledged around the world—and, in some cases, known for its unprecedented changes and proposed changes, guided by the notion of buen vivir [good living], is now trapped in a spiral of impoverishment, deinstitutionalization, and violence?

This is a question that must be collectively answered, as part of a search for ways out that can take us back to the pathway of profound change. It is also a challenge for social and political forces that must understand each other, overcoming induced disagreements and serving the sentiments of their base, as do the CONAIE and the Citizen Revolution.

[2] Party created by the Indigenous movement in the 1990s, with sectors ranging in the political spectrum from left to center-right.

[3] The motion to start impeachment proceedings was rejected by Ecuador’s National Assembly on Tuesday, June 28th.