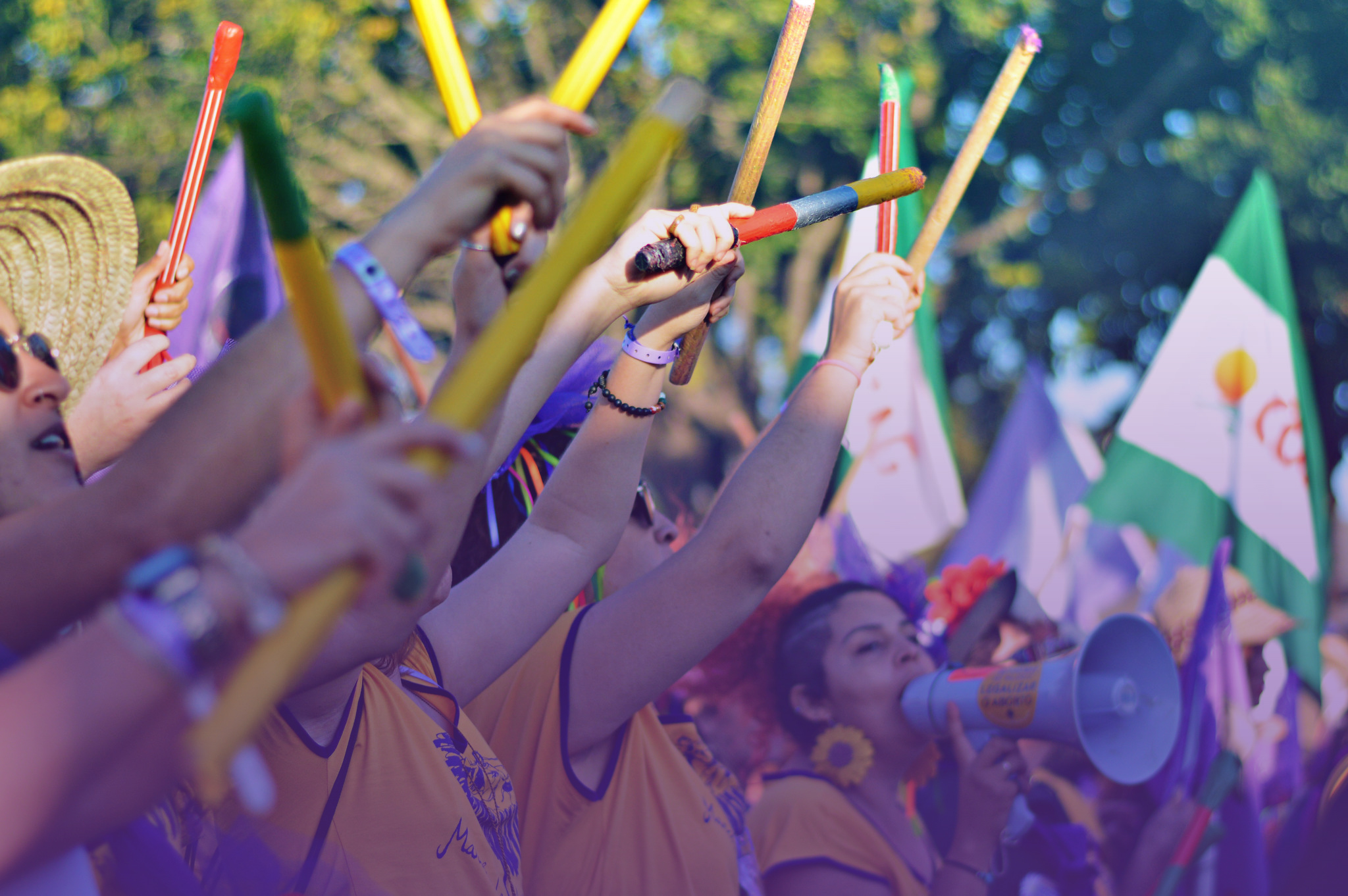 It is undeniable that today there is an expansion of feminism to several sectors. It has become a general agenda for society, and not just organized feminist movements. There are multiple points on the agenda and sectors, but there are also shared and converging directions. They include: the acknowledgment of the patriarchal and racist dimension of capitalism; the need to face the androcentric traces of the current model; the importance of defending diversity and sexual nonconformity; the need to assert other values and more democratic and horizontal forms of exercising power; the struggle against violence; the struggle for the right to abortion; the acknowledgment of the care agenda; and the need for women’s self-organizing. We assess that these directions combined are part of the accomplishments of the feminist movement and its ability to influence society at large and spaces of formulation such as the academy. On the other hand, this also comes with challenges and contradictions.

Part of these challenges and contradictions is regarding the different expressions of the feminist movement—that is, the plurality of positions that express different forms of addressing its political agenda and giving meaning to feminism. Overall, we can talk about a first level, which is the sectors that look at the need for an overall change in society; on the other, we can talk about liberal feminism, which is not concerned about these structural changes and is ultimately centered around an individual rights perspective. Beyond these challenges, we face the offensive of right-wing sectors, which is twofold: it co-opts and pretentiously incorporates feminism—something we call purplewashing—; and it promotes neoconservative far-right attacks.

The conversation between ourselves and the definition of a political project must necessarily come from anti-systemic feminism. Referencing an anti-systemic approach means understanding that this current model is capitalist, heteropatriarchal, racist, and colonialist. It means observing, therefore, the imbrication of the different forms of oppression. We understand that dismantling this model will only be possible if we simultaneously overcome this set of relationships. Moreover, it is important to underscore that the logic of accumulation that organizes this model is supported by this set of oppressions. Looking into the material bases of the dynamics imposed by this model is vital.

In our process, we have been defining ourselves as builders of grassroots feminism. But it should be noted that we are living a moment when several sectors that share this broad definition also feel the need to affirm their unique characteristics. And so we have popular peasant feminism, community feminism, Black feminism, and others, which organize with each other in unity while also formulating their own agendas and perspectives.

Building political actors that can play a leading role in social change is what makes change happens. This leads us to understand and exercise self-organizing as the guiding principle of the struggles, which is decisive for the self-emancipation of all of the oppressed.

Women’s place in the social, sexual, and racist division of labor is what explains their need to take a leading role as political actors. Women, more than men, need access to common goods and therefore are more committed to defending them, both in rural and urban areas, as Silvia Federici shows in her article “Feminism and the Politics of the Commons in an Era of Primitive Accumulation.”

The propositions built from grassroots feminism sum up several contributions, both from the discussion about and the consolidation of political agendas, as well as the process of organization and joint efforts among struggles. These syntheses and propositions are based on concrete actions that change society and women’s lives, showing that it is impossible to separate the discussions around the agenda and the constitution of the political actor. The fact that grassroots feminism is part of the working class in its diversity helps to define the political project with a stance that aims at a comprehensive change through a political project based on liberation, emancipation, autonomy, and equality. In this sense, it is important to look back at the analysis by Beth Lobo in The Working Class Has Two Genders (A classe operária tem dois sexos), on the reformulations of Black and grassroots women’s practices as a survival strategy as well as a strategy to resist domination and subjugation.

Regarding feminism becoming an agenda in society at large, the first point to take into consideration is that, in this scope, liberal views of feminism have been growing. This is materialized in several initiatives, such as the creation of sectoral organizations of professionals from middle-class and business sectors, several consultancy initiatives, training and marketing programs, as well as blogs and online channels by liberal influencers. In the academy, we see less critical aspects. There are different kinds of initiatives in this sense. Women’s participation in management spaces of capital today is often treated as part of the “feminist agenda.” What these sectors claim to be a feminist agenda is very far from what has been historically defined by most of the feminist movement as what we call the anti-systemic approach to feminism. This approach is beyond the liberal views of individual rights, empowerment or “equity” with men from middle-class sectors or the elite.

Liberal and reformist views are battling for feminism and are more present than we first thought. One example is how central the topic of “women and power” is today, without challenging the model of power, but rather seeing representation in spaces of power as the solution to the malaise. Media initiatives from these sectors often even appeal to social movements. But the most serious aspect of it is that it is part of the efforts that have been watering down the role of women’s movements. What is ultimately reinforced is individual and media leading roles. The most problematic thing is that the work of grassroots sectors of the women’s movements is rendered invisible, as is the role of their everyday resistance for the growth of feminism.

As we have pointed out, part of this process of fighting for positions is the fact that some ruling sectors organize their offensive to co-opt feminism, in which the entertainment industry incorporates parts of the feminist discourse with the support of women who represent the elites. The ambiguities of this process cannot stop us from recognizing the strategy that aims to trivialize the critical content of feminism.

On the other hand, the reactionary offensive of the far right makes feminism and all other sectors fighting for emancipation come under attack. These are the two sides of the same neoliberal coin. Looking at the big picture requires more complex answers, which must be offered by anti-capitalist and anti-racist grassroots feminism. In addition to organizing and expanding a critical view, formulating and exercising feminist answers implies organization—that is, the ability to position an agenda that materializes the struggles and points to pathways toward a different economy.

A huge challenge facing grassroots feminism is to globally and more strongly confront the current model and propose a vision for a new society, with new relationships and other forms of organizing labor, securing the sustainability of life and creating new subjectivities based on autonomy, reciprocity, and equality. The everyday practices women have built and accumulated over time point to several elements of this new becoming: acknowledgment and appreciation of affective relationships, well-being, care, transcendence.

To achieve that, acknowledging and strengthening grassroots experiences organized through the everyday struggle to sustain life is key. These are experiences that focus on the collective, from a perspective of the commons. They play a key role in building bonds, occupying territories, and redefining borders between private and public spaces, as the satisfaction of needs and promotion of well-being are collective concerns. Black women, Indigenous women, women from the outskirts, and peasant women play a huge role in these struggles and processes, building collective answers. The fact that women working in paid labor are mostly concentrated in care-related activities impacts their role in the struggles in defense of the commons and the sustainability of life in face of society at large.

They are usually connected to demands to the state, but also include reclaiming other forms of sociability and culture. This challenges the current model that pushes people to compete against each other, fosters individualism, and encourages them to stare at TV and phone screens and engage in isolated forms of leisure defined by the entertainment industry.

Building these processes and spaces means occupying and engaging the community, promoting collective, self-managed, and solidarity- and reciprocity-based work experiences. These are experiences that change the present while also pointing to the possibility of social reorganization with no exploitation or hierarchies.

Through women’s different expressions of resistance, resilience, and propositions, this view of feminism as part of an anti-systemic project materializes an action that places life on center stage, by understanding our interdependence as human beings and our dependence on nature.

Nalu Faria is a member of the International Committee of the World March of Women representing the Americas. This article was first published on the portal of the Latin American Information Agency (ALAI).

How Have the Forests of “Israel” Swallowed Our Unpopulated Land?