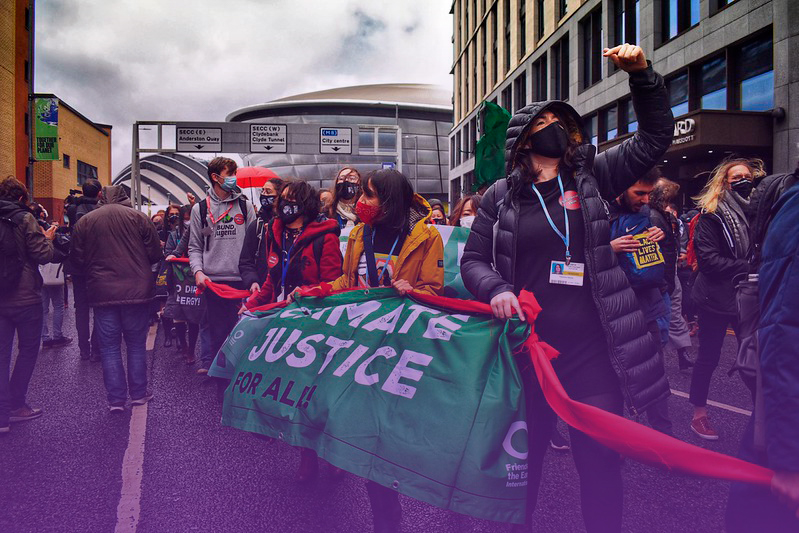 Building a Binding Treaty for Transnationals is a Feminist Struggle

Women are the most harshly affected by the power of transnational corporations; but they are also the ones primarily resisting it.

The 7th session of the open-ended intergovernmental working group on transnational corporations and other business enterprises with respect to human rights took place in Geneva in late October 2021, at the United Nations Human Rights Council (UNHRC). Chaired by Ecuador, more than 70 countries took part in the session.

The struggle to set up these norms is centered around the need to rein in the actions of transnational corporations in different territories by implementing international legislation that can hold them accountable for the systemic violation of human rights perpetrated through their activities.

Common corporate practices include the widespread appropriation of nature; the destruction of ways of living of traditional peoples and communities; reduced food sovereignty; criminalization and violence; flexibilization of rights and increasingly precarious labor conditions; and the infeasibility of maintaining community-based social relations, forcing large parts of the population to migrate or resettle.

The Impact of Free Trade Agreements

Since Salvador Allende’s 1972 speech to the UN, over the years we have seen how political, economic, and cultural power has become severely concentrated in the hands of transnational corporations. These corporations hold much more capital than several states and ultimately control them due to their economic dependence. This way, instead of holding companies accountable for the social and environmental damages they cause, the state becomes complicit in their activities.

Free trade and investment agreements also contribute to corporate impunity, as they privilege economic rights to the detriment of human rights, establishing international arbitration mechanisms. As a consequence, states that dare to hold companies accountable are ultimately found guilty by arbitration courts. Some examples include the Uruguay v. Philip Morris and the Ecuador v. Chevron cases.

Also a common practice of transnationals around the world is the super-exploitation of women. Excluded from these companies’ productive processes, women become part of these activities under marginalized or vulnerable conditions. From labor exploitation to sexual exploitation, we must underscore that the M.O. of large companies goes beyond borders and finds breeding ground for impunity due to the lack of legislation in their own countries.

This is an imperative reality, especially in the global South, but it also becomes the driver for women’s engagement and leadership in processes of resistance. Women around the world play a leading role in the struggles for a fairer society, in defense of nature, for the end of violence and sexual exploitation, for housing, and for food and water access. Transnational corporations have been destroying social fabrics and modes of production of life, increasingly overburdening the women who sustain the entire care economy because of the patriarchal social structure.

A striking example was the Rana Plaza building collapse in Bangladesh on April 28th, 2013, when 1138 people died—80 percent were women working in the textile industry. These women workers made products for major brands such as H&M, C&A, and Benetton under unhealthy conditions and for extremely low wages. Transnationals not rarely subject women workers to degrading conditions, subletting facilities to minimize production costs.

It’s exactly because women take the lead in defending territories against the advancing power and control of transnational corporations that we have seen a strong young and feminist leadership at the 7th session.

The scenario of a battle of ideas spearheaded by women has brought together several women as political actors who hold leadership positions in countries that push more advanced positions on transnational regulation, such as Palestine and Egypt, as well as women who work on the civil society level. This included grassroots jurists defending a political agenda with rigorous legal technical grounds as well as feminist leaders from grassroots movements and their powerful words. Major coordinated political efforts to defend the peoples are indisputably spearheaded by women.

These women’s role was fundamental in making the content of these proposed norms include different conditions to which the most vulnerable groups are exposed from an economic, social, and environmental perspective, such as children. Women organizing has brought conversations to the table about the whole gender issue, discussing these companies’ operations and exposing their falsely inclusive policies.

Many challenges are posed to build an ambitious binding treaty that can put an end to the impunity enjoyed by transnational corporations. The following challenges stand out: the need to overcome US attempts to empty out the agenda to build “soft law” initiatives; the initiatives to engage corporations in the negotiations, proposed by the European Union; and the uncertainty around the continuity of this negotiation methodology by Ecuador.

The Actors Struggling Against Corporate Impunity

Grassroots organizations will play a decisive role in the meantime between this session and the next to pressure their states to defend the interests of the peoples in these negotiations. Lawmakers will also play a key role in pushing to set up regulatory frameworks to punish corporations for human rights violations.

The Global Campaign to Reclaim Peoples Sovereignty, Dismantle Corporate Power, and End Impunity was established in 2012 and is made up of more than 250 organizations, social movements, and communities affected by transnationals. The members of the campaign have followed and advocated for these groups in the negotiations for the Binding Treaty since they first started in 2014. The symbol of the campaign helps us think about the kind of mobilization we must build: a white man in a suit representing corporate power is held on the ground by the people.

Now that the 7th session of negotiations is concluded, we can say that women are spearheading this struggle, breaking the patterns of International Law, and touching the nerve of the patriarchal and racist capitalist system.

As women play the major role in resisting the impacts of transnational corporations in their territories and are leading the negotiation process for the binding treaty, all organizations that struggle against corporate power must acknowledge that this is a feminist struggle. We must, therefore, rethink its symbology, leadership, and positioning to acknowledge this key political actor. Similarly, the countries that are negotiating the document must understand that their stance in this process will directly shape the everyday lives of thousands of women around the world.

The major role women play in this process reflects the long-standing feminist struggle and political organizing to build a kind of economy and politics that puts life on center stage, before profit. Therefore, we will continue to struggle to push international law frameworks forward and make them effectively real; to reduce the power asymmetry between transnationals and the peoples; and to create better conditions to live and survive while we weave different modes of production.

Júlia Garcia is a militant of the Movement of People Affected by Dams (Movimento das e dos Atingidos por Barragens – MAB) from Brazil; Letícia Paranhos is a member of Friends of the Earth International (FoEI); and Tchenna Maso is an associate researcher at HOMA – Human Rights and Business Center. The authors are part of the Global Campaign to Reclaim Peoples Sovereignty, Dismantle Corporate Power, and Stop Impunity.