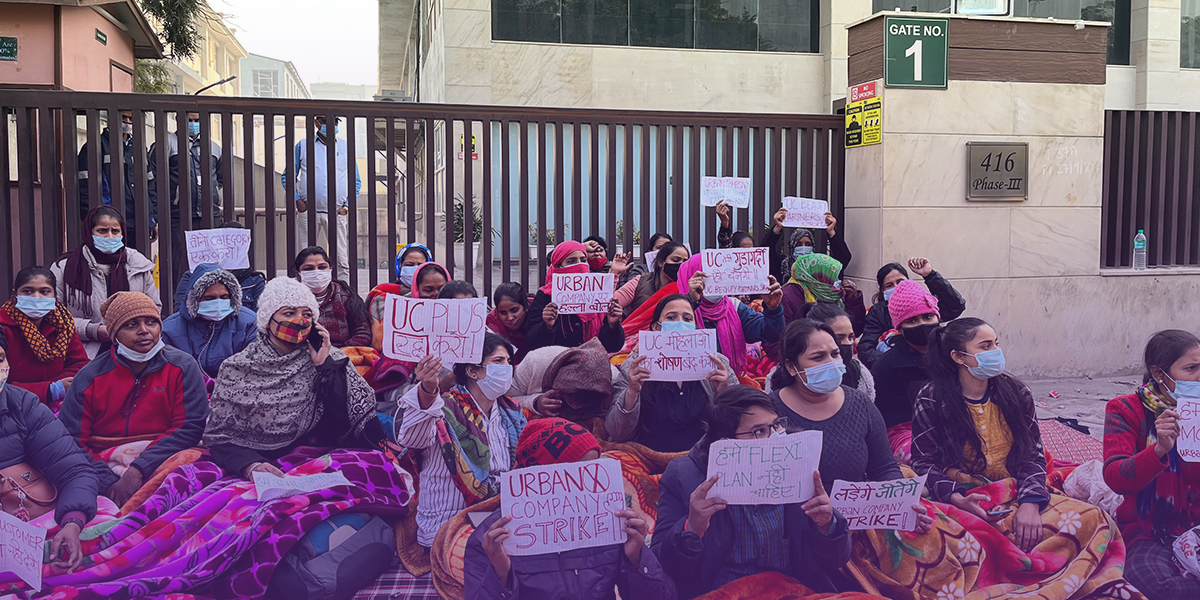 What would an anti-capitalist framework look like? It needs to go beyond the hunt against corporations and corporate power, which of course, is something that we have to dismantle. What we need is to create alternate structures for collective action and for social commons, especially at a time when we know that we’re dealing with something new. It’s capitalism in crisis, but capitalism at the end, which is revolutionizing itself in data capitalism. Now we have a network monopoly within Big Data and algorithmic mining also, which has led to a commodification of social production of knowledge, art, communication and information. Everything is in the shape of capital, which has created global digital debt relations that have a peculiar impact in the ‘global South.’

We are seeing that there are carbon credits and other provisions being exploited to penetrate the flow of capital in the global South. There are Bitcoin cities emerging in El Salvador and other places, this should tell us about the material effects of a highly speculative global system of data trade. At this point, the production process itself is engendering the value of labor in a false relation with the capital. In the earlier production and reproduction processes where women were engaged, it has been about doing routine intensive work for big companies like transnational corporations. This has and can lead to large scale displacement and dispossession.

A lot of big capitalist firms, like Levi’s, would get some of the menial jobs done in factories in Bangladesh or India. Now, those jobs are getting automated and near-shored. So, on one hand, there is automation which ties to questions of migration and flow of labor; then, on the other hand, that is platformization and digitalization of work which leads to internal displacement of labor. One thing is the displacement of labor that is already in the precarious and lowest rungs which is not limited to digitisation of work but also due to the structural reconstitution of social relations, ideological and governance coordinates that this digital regime of capital imposes.

Over and above the loss of secure jobs, what are the new jobs that are being created? David Graeber talked about the “bullshit jobs” that have been created by the capital. A lot of the jobs that are being created, which even the WEF takes pride in, are not secure. Rather they rely on a systematic deskilling of labor populations accrued by international and national withdrawal of investment from public goods and services: education, health and nutrition.

Problems of the new work

These new jobs in the digital market don’t offer any social protection, they don’t give workers any rights. Right now we’re also contending with a framework where workers are posited as consumers or prosumers. They’re seen as part of the capitalist “dream” which falsely justifies itself by selling the logic that anybody can become a capitalist in a system which is based on exploitation for its own survival.

The worker is now seen as a co-participant in the production process and therefore the corrective burden of “fixing” the systemic rot is also to be equally shared by them as equal “stakeholders.” Workers-as-consumers are expected to pay for privatized health, education, data, information (services that ought to have been freely and universally accessible) through rent-debt structures: subscriptions, temporary contracts, commission-based remuneration (against wages) and crypto bonds, to name a few. There is a widespread increase in disenfranchisement of labor. Along with that we see a certain kind of entrenchment of under development, at least in the global South. Besides, there’s the commodification of health, education, food, and water.

It might be helpful for us to also think about the future of work as a crisis in work. We need to be mindful of a certain kind of subversion in language that is being deployed especially by the blockchain[1], Web3[2],  and cryptocurrency[3] enthusiasts. These people are deploying emancipation and liberty language to further anti-establishment libertarian rhetoric which is neither anti-capitalist nor emancipatory.

Let’s question the existing financial logic. Until we do that, we won’t be able to really liberate women, workers or any constituency impacted negatively by the exploitative structures of the capital.

In IT For Change we worked on this hollowing out of the public sector in India with the New Umbrella Entity policy that was created to foster privately run parallel financial infrastructures. We have a petition against it precisely because if licenses were handed out to Big Retail and e-commerce entities like Amazon, Flipkart-Walmart and Jio-Reliance, who are themselves one of the biggest users of payment systems, then the vertical integration of a digital payment ecosystem with their commerce ecosystem will lead to the creation of highly dangerous monopolies. This also challenges the enduring myth that decentralization of infrastructure and opening it up to the free market would lead to “equality,” whereas in reality it only creates internal competition within the ruling class, which too is far from “equal.”

Women have been facing a lot of harassment online. Most recently we saw that Muslim women were targeted by a GitHub site created to auction them. Even with the cybercrime laws and others, the scale of multinational corporations is so immense that it’s not possible to really pin it down and get them to even appear in a hearing. There is Pegasus, a big virus unleashed from Israel. Who has the jurisdiction to even administer these things? Therefore in order for digital sovereignty to be realized, it is imperative that we have global data governance without which national laws would continue to be side-stepped or co-opted by Big Tech.

Recently, we saw a platform of workers from a company called Urban Company which basically deals with providing at-home beauty services on demand. The algorithmic bias and violence, we are familiar with. We know that there are real impacts of AI projections,  predictive analytics, machine learning and data aggregates which determine people’s social behavior and access. Workers are tracked, monitored and surveilled.

In the absence of a minimum wage, workers are rather given “incentives” that retroactively impute casualty to worker and consumer behavior, justifying these regimes of exploitation and exhaustion in over-time work as a “choice.” Furthermore, if a worker gets bad ratings, they’re not given algorithmic priority and end up losing clients or they are susceptible to mistreatment by customers because their data analytics are very low. The rating then becomes a tool for disciplining workers. Women workers of Urban Company protected these insecure working conditions, and highlighted how it was common for them to be met with violence and harassment on the job.

Similarly, there was a huge protest against Swiggy, a platform of food delivery services. The workers protested a lack of minimum wage and life and accidents insurance. There are clear risks in these flexi models of work and people are being forced to enter an increased precarity. The labor market in itself is rooted in structural exploitation.

Women workers from Urban Company further challenged the platform-based labor relations, by noting how they have to give them a subscription fee for something that should be freely available because they’re the ones doing the services for the platform. This is one of the modalities through which rent is extracted from the service providers who are then deemed as partners. Just as Big Pharma companies benefit from patents, which help them extract rent for drugs they have developed, pushing up the costs of medical treatment for ordinary citizens. Similarly, in the digital landscape in order for workers to sell their labor power, they have to pay service platforms to enter the digital-enclosed market which nonetheless trades in the data extracted from the efforts and engagement of labor.

Narrowing my focus now on the impact of the pandemic and digitisation of work, there was a trend towards forced virtualization of work given the public health emergency the world is witnessing. Women have been pushed back to the home and there have been several documented cases highlighting how they became more vulnerable to domestic violence through this period. Even beyond the household, you’ll see that there is a kind of reverse migration happening at a global scale. Besides, all the jobs in manufacturing and assemblages are getting automated. A survey conducted in Reshoring Initiative 2020 exposed how bringing back offshored jobs nearer to the global North has impacted the workers of the ‘Global South.’

What do we do about it? The plans of action recommended by IT for Change are to have a collectivist global data governance approach, which involves setting some universal principles a la global data constitutionalism that aims an open use and access of the internet infrastructure aimed at dismantling data enclosures in the hands of private monopolists. Countries should be given autonomy to decide political strategies in alignment with their interests. There should be some kind of South-South cooperation ensuring that at least tax justice is meted out. It’s necessary to create universal labor guarantees, so that, at least in the time of crisis, the labor population is not left in the lurch but rather has some resources to handle the kind of contingencies that arise from time to time.

Because there has been so much conversation about crises and capitalism, it’s essential that we understand that this does not mean a complete breakdown of capitalism, rather the internal contradictions between labor and capital are more pronounced and deepening under the weight of its own self-engendered crisis. Gender relations too are being reconfigured along digitally restructured values chains. We are confronting new inequalities while also seeing a deepening of the already existing ones.

Avantika Tewari is a Senior Research Associate at IT For Change. This is a synthesis based on research inputs from IT for Change. The article is a transcript of Avantika’s speech during the “Feminist Solidarity against corporate power” webinar from the World March of Women.