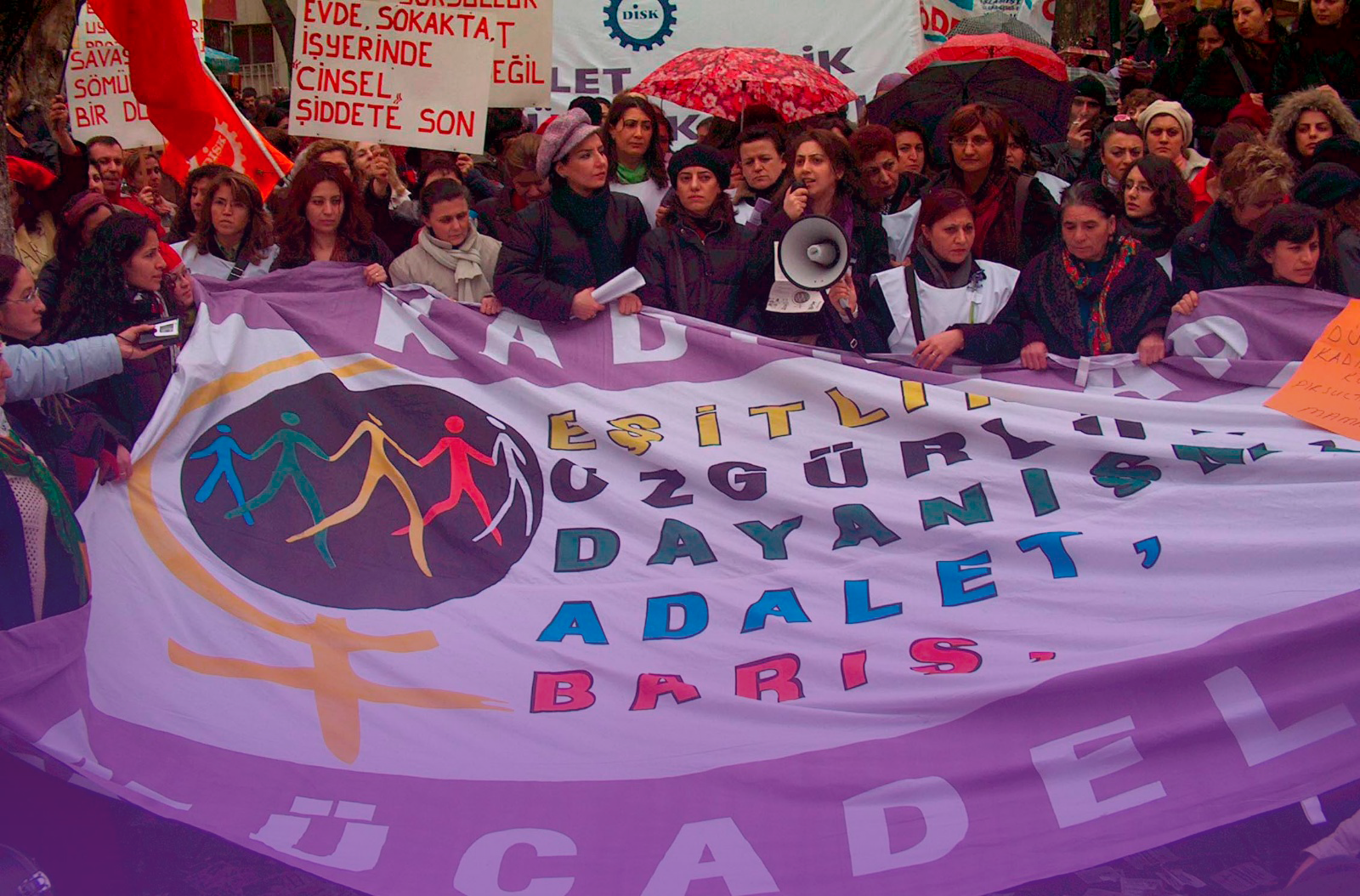 Capire talked to Yildiz Temürtürkan, international coordinator of the World March of Women, about the movement’s history and challenges.

Born in Ankara, Yildiz has followed a long path of militancy, which she first stepped during the military regime in the 1980s. She came across the launching proposal of the World March of Women in 1997, amid her struggle for human rights, and, since then, she has been building the movement in Turkey and internationally as a member of the International Committee, and, since this January, as the movement’s international coordinator.

During the interview for Capire, Yildiz remembered the political and organizational accumulations of the World March of Women’s feminism: claims, principles, and forms of action, “instruments for feminist action and theory all ahead of our time”. Questioning the declaratory solidarity, she reflected on the importance of facing colonial hierarchies, reinforcing, and practicing a form of solidarity that contributes to the organization rooted in the internationalist grassroots feminism.

In the 2022 agenda, she emphasized the importance of reinforcing education for the organization and the mobilization capacity to face militarization and life-capital conflict, prioritizing life sustainability. And, in view of the corporate and neoliberal attacks against feminism, Yildiz reminds the strength of the proposals and practices of feminist economy of women around the world, the foundation of the World March of Women’s view and political action.

Yildiz, you have been part of the World March of Women for quite some time now. Can you tell us about what brought you to the organization and share with us your journey so far?

Sometimes I think about what brought me to the movement and what kept me inside of it for such a long period despite all the challenges we have. The WMW itself was a collective response to the neoliberalism that was strongly hegemonic in the year 2000. Back then, it seemed like there was no way out of it. That was when we raised our voices, decided to go beyond the possible and imaginable, and gave birth to our platform of international demands. Recently I just looked over what demands we had then and they are still relevant. Especially now in the face of a global humanitarian crisis with the pandemic, climate change and economic and financial crisis.

We, as the World March of Women, produced documents, demands, values, proposals and forms of actions. We also produced instruments for feminist action and theory and they’re all ahead of our time. Still after 20 years we can raise our demands at the global level. We can bring so many women together around these issues. Back then it was the first time we were witnessing and experiencing a global action organized by all women together. The democratic life and the decision-making process have been very collective from the beginning until now.

We feel ourselves always part of the decisions. We are always involved in decisions that are made collectively with delegates from all over the world. The same amount of delegates for each country to ensure democracy. I always remember that we started as a network and then we decided together, after a decade of experiencing being an international network, to be a movement. An anti-capitalist, anti-imperialist, feminist movement. This decision was one of the important milestones in our history.

Almost after a decade of this decision to be a feminist movement at an international level, we are constructing an International Feminist Organizing School together with allied movements. This is an ongoing process and an ongoing construction, but I think it’s another milestone in our history. We need to keep our memory of experience and construction process. It is crucial to write down our history, and to write our rich experience accumulated at the international level. That’s one of the important tasks waiting for us for the next upcoming years.

Around which agendas and how is feminism organized in Turkey? And what are the challenges and contributions of the World March of Women there?

We mobilize to denounce patriarchal injustice, feminicide, sexual violence and we try hard to defend our achievements and laicism, threatened by this authoritarian government. From our historical experiences, laicism is the issue getting more important in our territory, in Islamic territories today. We share it with other sisters from the Middle East, Pakistan and others, and we all agreed that laicism is a very important issue in our territories. However, the woman’s and feminist movements of Turkey are very much fragmented. This fragmentation reflects ethnic, religious, political divisions and polarisations in the country.

I think that is important for an international movement to have a strong root in Turkey because it is a crossroad of three continents. It connects Europe and Asia from the Balkans to Caucasus and countries of the Middle East and the Mediterranean. It’s a very strategic location for the international construction process and that’s one of the reasons that we assumed this challenge to host the International Secretariat here. This will be an international experience of feminist movement in the country. Our host organization is the Flying Broom, a well-known local feminist group. It will be a chance to look up to the problems from an international perspective, which will improve the feminist movement in Turkey as well.

Solidarity and internationalism have been part of the World March of Women’s strategy since the beginning of the movement. How do you see the accumulations and challenges of feminist and internationalist solidarity in the face of the current context of wars of a new type, criminalization, coups and authoritarianism?

Internationalism is one of the principles we should reflect more in the future. We need to elaborate it from an anti-colonialist feminist perspective. Sometimes, in the name of internationalism, unintentionally we may be falling into a trap of regenerating colonial relations inside the movement. Today global cooperation is essential more than ever to solve our problems, such as the pandemic and climate change, and in our struggle against this market authoritarianism we face all over the world. As a principle, global cooperation based on internationalism deserves a special attention today. From the very beginning, the World March of Women has insisted that international movements cannot be confined to the expression of solidarity and deepened the meaning of internationalism in its global actions.

Being in solidarity with the same women from certain territories and countries for more than two decades creates a permanent status in which some women in the movement are always in need of solidarity as others have privilidge of offering solidarity. As they are constituents of the movement, they need to be part of our collective processes. This regenerates the hierarchy and inequalities already existing among peoples inside the international feminist movement.

Sisterhood and solidarity is important values of feminism. However in our practice we have experienced that solidarity is generally offered to the east and south of the globe, but not to the north or west. That’s why we must deal with the solidarity issue in another way. For example, what can we do for women suffering from the criminalization of authoritarian government occupations or a military coup? What can we do in the name of internationalism? We cannot limit our internationalism with solidarity. We need to articulate women who faced these violations into our movement supporting their construction processes in their countries to ensure their presence in our movement as equals, as independent political subjects, not just always being dependent on solidarity of others.

Feminism is currently part of the agenda of different sectors of society, including the hegemonic media and transnationals with corporate capture, but we have also seen an expansion of feminism in mixed grassroots movements. At the same time, there are very different views within feminism internationally. How do you evaluate the conjuncture of feminism today and how can the field of popular feminism influence it?

Today the cooptation process is one of the biggest challenge for feminism everywhere because capitalist patriarchy has a very strong cooptation capacity. We are aware of this cooptation process and its mechanisms. There are formal and informal mechanisms: “purple washing” or “purple makeup”, as we call, is an informal way of cooptation. With this, corporations try to impose us their own agenda and to use a feminist discourse for the interests of the capital. Market activism is rising with its individualistic and fragmented way which inspires competition instead of solidarity and unity.

At this conjunture it seems very difficult, may be not realistic, to build a unity within feminism and among feminisms. Rather it is all-important now to consolidate our unity as international grassroots movement and to keep on our construction process at every level, international, regional and local. Our instruments in this construction process are feminist action, feminist training and communication. Therefore capiremov.org itself has very constructive role in bridging action to training and connecting debated in different languages.

Again it’s time to go out to the streets. Next year we have the NATO Summit in June, an important international space which will decide our common future. It’s a very important moment for us to build a strong alliance and protest against NATO (North Atlantic Treaty Organization), militarisation and war.

Our construction is an ongoing process including diverse levels and forms of activities. We have been experiencing a construction process of the Feminist Organizing School, a unique experience. Now we are reflecting on how to extend this experience and accumulation at regional and local levels.I feel pressure of recent developments that urge us to develop feminist economy both in theory and practice as our alternative.  To be able to defend life and Planet we are obliged to advance the discussion and practice of feminist economy.

We must also take a look at the history of our movement. We left two decades behind us with a lot of experience, so it is time now to bring together all experiences we have accumulated. This should be a task for the new International Secretariat and International Committee in order to transfer our experiences to a new generation of feminist militants. We owe this to young feminists and to our sisters Awa and Sashi to write down their history and our history.