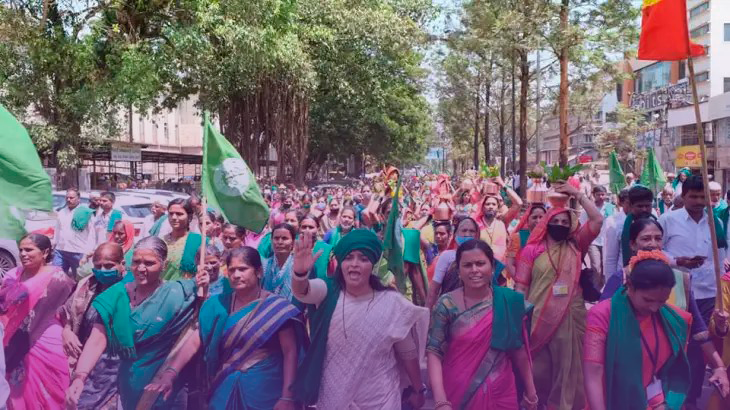 Peasant Women in India: One Year of Intense Struggles

Since november 2020, Indians peasants struggle for their rights that are in constant danger of being withdraw by the far-right, authoritarian government ruled by the prime-minister Narendra Modi. The country is struggling against Modi’s agenda in partnership with transnational companies that put in risk the lives of many farmers in the country specially women. In India, 80% of the food that are produced, is produced by women. They are the majority working on the fields and plantations, even when they’re not officially considered farmers, and the ones that suffer the most with the lack of policies.

Chukki Nanjundaswamy have been part of the farmers movement from her youth. She’s one of the coordinators of an agroecology school, based in the southern part of India, in Karnataka, and worked as a member of the International Coordinating Committee of La Via Campesina. During this interview, Chukki talked about this last year of intense struggles in the country, their mobilization for the minimum support price and against the privatization of the markets, the violence suffered by women farmers and the events of this last year of protests. To understand more about the women struggles in India, read the other contents from Capire here.

Peasant mobilizations against the new policies of Narendra Modi’s government that favor large corporations over Indian producers have been going on since November 2020 and had one result: the three laws proposed by Modi were repealed. Now, a little over a year after this struggle started and with this achievement, how is the situation of Indian farmers?

The situation has not changed. The agriculture sector, the farmers in the rural areas were already stuck in a very serious crisis much before these three laws came into existence. Instead of addressing the deciduous crisis which exists in the agrarian sector, the government made use and took advantage of the pandemic to pass these laws without discussing it with the parliament. But our resistance and our mobilization forced the prime minister to bend in front of the democracy and he had to withdraw these laws. At the same time we had another demand, which was to legalize the minimum support price.

We wanted to discuss a mechanism which has been proposed by M.S. Swaminathan who was Director General of the International Rice Research Institute (IRRI), many years ago. He’s called the father of the Green Revolution. Recently he had made some recommendations which are in favor of small farmers of India. The farmers movement in India has been asking the government to implement those recommendations. We are not asking anything new. It was one of the points that they had promised in their manifesto before the general elections. The government basically had given an affidavit to the Supreme Court of India that it was not possible to implement a particular recommendation concerning the price mechanism of the agrarian produce.

In that sense, the government has not fulfilled all the demands of the farmers movements of the last one year. The situation is still the same, nothing has changed. It’s a federal country, and there are many states where the privatization of the market is actually happening. This was one of the laws which they tried to implement at the national level. They have withdrawn it, but many states have already implemented it, they haven’t withdrawn it at the state level. One such market has actually entered our state, Karnataka. So, there is already a struggle going on against the privatization of the market.

Can you tell us more about the Minimum Support Price (MSP)?

There is a recommending body at the national level, called the Commission for Agricultural Costs and Prices. It’s constituted by agricultural scientists, economists, and they calculate the cost to produce an acre or hectare of a particular crop. We have been fighting for 40 years against the methodology that they use to calculate the cost because it has many flaws. it doesn’t even meet the expenses and livelihood of the farmers. Every year they come out and declare a minimum support price for around 23 to 26 crops.

Not all the 23 crops are procured by the government. Around three to four major crops like wheat and rice are procured under the MSP and are sent to the Food Corporation of India and that gets distributed through the public distribution system. This is how the MSP Works. What we have been asking is to legalize. There is no legal sanctity to this, it’s just a recommendation. If the traders are buying below the minimum support price declared by the government, you don’t have any legal protection against it. That is why we have been asking that there should be a legal sanctity.

As you said, the country’s peasants continue to fight against the privatization and outsourcing processes of political apparatus linked to the countryside. What do these privatizations mean in the lives of Indian women farmers? How does this affect their lives?

Many farmers are already committing suicide. According to the official data, since 1995,  more than 300 thousands farmers have committed suicide. And this is not real data because for the government those who have land titles in their names are the farmers, but there are many farmers who don’t own any land. They don’t have any documents, they are tenant farmers. Most of these are women, and if they committed suicide, they are not part of this government data. We think that the number could be two or three times more. When a male farmer commit suicide, one who has to take care of the family and bear all the burden that was left behind by him is the woman.

Women don’t have the privilege to just leave everything, she’s responsible for her children, the one who takes care of the house and all the older parents in the family. She’s the one who has to take care of the farm and pay back the credit they have borrowed. There is a serious feminization happening inside agriculture, but even today a woman is not considered a farmer. The woman does 99% of the household work, the work in the farm and everything, but even today a woman is always the wife, mother or daughter of a farmer. 80% of the food in the country is produced by women, and they are the ones who produce, process and cook, so everything is done by women.

Around the world, movements followed the intense struggle of Indians for the right to land, but they were also alert to repression: around 700 people died during the mobilizations. What does this violence on the part of the state mean?

Most of the 700 farmers who gave their lives during the one-year long struggle in Delhi were sitting in protest. They were senior farmers, in their sixties and seventies. I have also met farmers who were in their nineties. Many of them gave their lives there. They faced severe winter, monsoon, and severe summer. They were basically sitting on the national highways around Delhi. The government said that they had no data when we said that they had to first pay compensation, they had to pay the damages to these families. Our government is very comfortable in saying that there is no data of the farmers who gave their lives in protest.

Besides these, there was a brutal assassination of farmers by the son of a minister in a state called Uttar Pradesh. A group of farmers were showing a black flag in protest against a meeting held by one of the ministers. After the protest they were walking back, going back to their homes, but the son of Ajay Mishra, a minister, drove his four-wheeler on the walking farmers, killing five of them. There were police firings and repression in many places, specially in the tolls on national highways. All through the year, this is what we saw. That was the response the government gave to the protesting farmers. They tried everything to delegitimize the protestors, to not admit that they were farmers of this country who have been feeding the country for ages.

On the 26th of January 2021, the historical farmers parade took place. It’s the Republic Day of India and for the first time in history, a tractor parade by the farmers took place inside Delhi. More than 500,000 tractors were on the streets of the city and the police intentionally misguided and made the farmers enter the Red Fort, a symbol of India. A group of people who were infiltrated inside the march tried to say that the protestors were not farmers. Calling them anti-nationals. There were all kinds of rumors, but it’s a democracy and it has to win.

Although women are the majority in the countryside, they still face many challenges to have their rights recognized. What are the claims of Indian women in 2022? What are the next steps in the fight?

The very first demand of Indian women in the farming sector is to be recognized as farmers. Secondly, we are demanding for a law to have a joint title over the land. The land is never in the name of a woman. As soon as the woman gets married, the title of the land should become a joint with her husband. The feminization of agriculture is taking place everywhere and the government is totally blind, the policies that they are framing are totally blind. We want the government to set up a special commission to work on women farmers, to study the situation of women in agriculture and come up with policies which will favor them. That way women can have a system of resources, including credit.