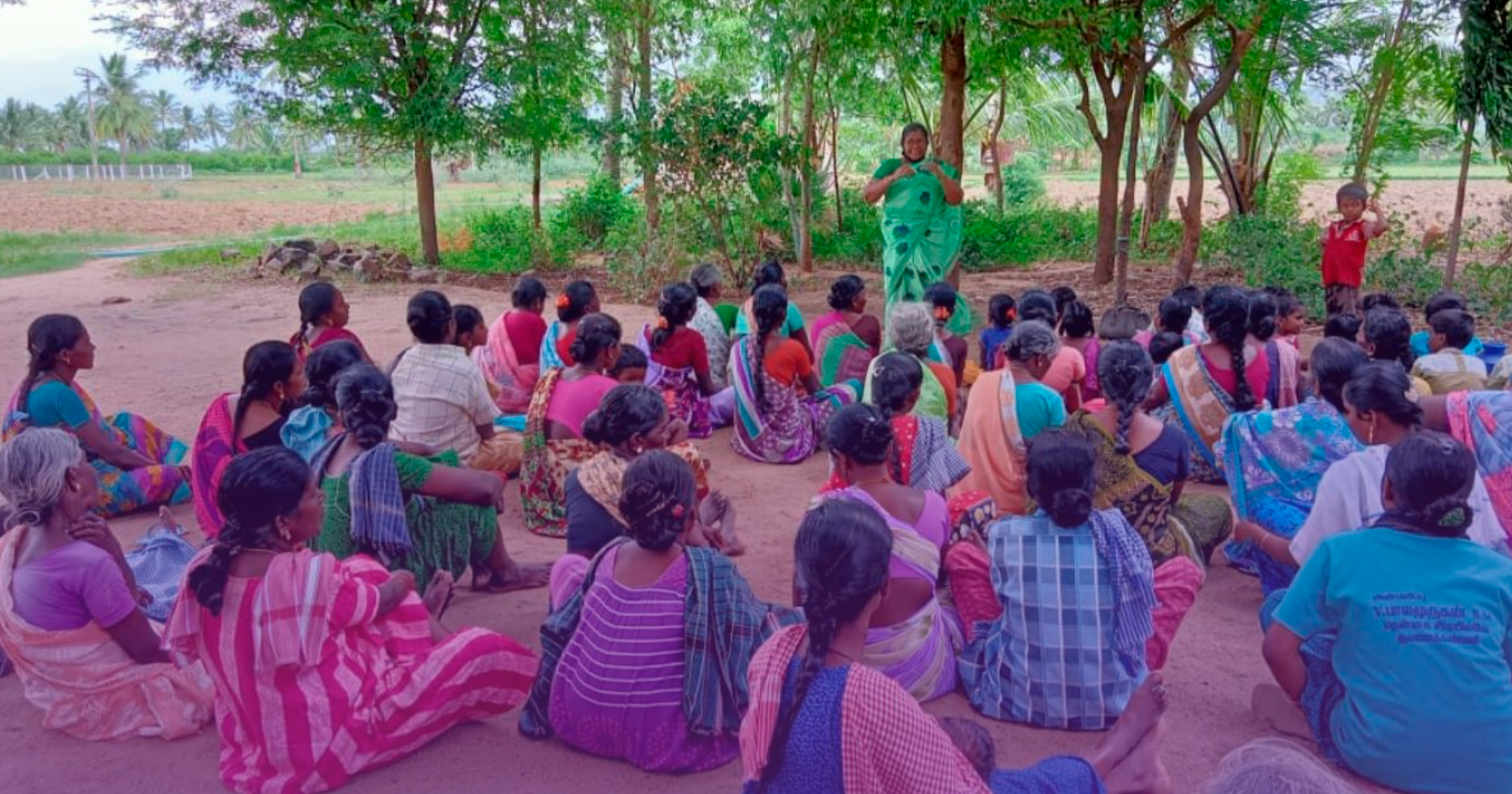 The Women’s Collective (WC) is a membership based organization focused on the empowerment of women. It started in 1994 in six districts in India, with struggles to end violence against women. Now, the organization have 38 centers, covering around 21 districts, with a membership of around 100,000 women. To understand more about the experiences of WC building alternatives for women’s work and lives in the region and in each territory along the years, Capiretalked to its founder Sheelu Francis.

Would you explain to us the context in which the Women’s Collective was born and the impacts of it through time?

First, I formed a group called Voluntary Organizations Women’s Staff Association which served as a platform for women to come together and share their problems. That was the base for the Women’s Collective. Initially, we were trying to understand what was wrong with some NGOs whose workers reported sexual abuse and violation. Then we started to build an alternative for that, and it became our code of conduct. We named ourselves as a collective because we decided to have a participatory approach and collective leadership. At first, we were sharing a lot about our own issues, so we decided that we would strengthen ourselves before we actually go to the field to strengthen other women.

We educated ourselves, built our own capacity, and did a lot of training and social analysis to start addressing the issues of violence against women. Slowly from there, we moved on to political and economic empowerment and then to women farmers. Today, we are working with women farmers across the state focusing on climate resilient farming to ensure food security at their household level.

You have many initiatives to face poverty starting from women’s organization for economic autonomy. How does this experience relate to the feminist economy?

Initially, when we were going to the communities, we realized that the majority of the households were heavily indebted. The moneylenders were charging high interest and people were finding difficult to make both ends meet. We used the participatory method to work with the women and the community and make them realize that the interest was going out of the community. By realizing that, they decided to start working together and to create economical solutions for them.

Each Community had more than 600 families. We were trying to organize all the women according to their economic level. Initially they started small savings. Some groups started with just two rupees a month. Today those women are saving 500 rupees. These practices created savings among the groups and the interests started to be paid within the comunity. After a few years, they divided the interest among themselves, which permitted some people to start small business, while others used it for agriculture.

Slowly the village economy was being supported by these women and their status improved. At the same time, a local governance bill was passed by the central government and we had local elections. We identified potential leaders, trained them and facilitated them to contest in the local elections to become Panchayat presidents. Panchayat is the lower governance body in India. (Each Panchayt may have one or more village according to the population).

Being a Panchayat president gave them the space and political power to plan infrastructure, work and income for the village. We were also addressing the issues of violence against women and domestic violence. After three or four years, these members created a way of working that, if there were a problem in one of the households, the entire group would go there to negotiate, discuss, challenge, or take them to the police station. The most important thing is that whatever they were doing, we were only guiding them.

The villages became stronger, and then we realized that they were spending lots of money on food. Also they were not getting quality food. Most women do not own land. Most of them are from the daliths (untouchables). We were trying to organize them and identify land owners, who were migrating to big cities in search of jobs, to negotiate with them to give the land to single women who would cultivate food for their own consumption. This is the model that we are trying to use in different levels in each region. I won’t say that we are successful everywhere, but the community has given good recognition for these women. If there is a problem in the community, the women leaders are called for the meetings, they are given a seat, their opinion is also asked.

By 2001 we started working on the subjects of gender, caste, class, also with children and youth. Today those children have grown up and contesting elections, becoming local leaders, taking up issues. We were trying to slowly address all the sectors of the communities, organizing them into what is called a GramaSabha. The government has GramaSabha meetings to budget for the villages and people can participate. So we prepare together for the meetings with our representatives. We discuss what resolutions we want to be passed, what things need to be questioned, so they can actively participate. This works as a model which could be replicated in other villages, and that is what we’re trying to do.

A fundamental issue for women’s economic autonomy is the right to land. And since last year, we’ve seen a huge mobilization of farmers in India. What are the challenges that women face in this context, and what’s the importance of the struggle for food sovereignty for the liberation of women?

In India, 80% of the agriculture work is done by women. Even so, the government has not recognized them as farmers. Because of that, we don’t have access to credit and only 12.8% of the women own pieces of land that are very small. Land rights and recognition as farmers are the two things which we are focusing on. We are advocating alongside the government to give land to women’s groups for the production of food.

What we have done so far as part of the resolution in our GramaSabha is to try to create political solutions and submit them to the Agriculture Minister. We have invited him to our meeting and tried to negotiate. On the other hand, for the past five or six years, we have also facilitated women to buy land with the savings they have. In this period, we helped more than one thousand women to buy land.

Recently we had elections and the new government had a Planning Commission meeting recently, for which we were invited. We have impressed upon this government the need for land to be given to women who are doing most of the agriculture work in the country. We have also asked them to start land banks, so the people who are not cultivating their land can deposit it in the land banks, and people can have access to it by renting it out for food production.

We were also part of the farmers’ protests, but the challenges are totally different for men and women farmers. Most of the women farmers are subsistence farmers. They produce for their own consumption, so they are not dependent on the market and they don’t produce cash crops, only products that they can go to the market and sell. The new farm laws are affecting market oriented farming, so although we are there to show solidarity and to join the protests, the direct impact on subsistence farmers is very limited.

We are members of many groups such as the Millet Sisters Network. Millet is a small and nutritious grain that doesn’t require a lot of water to grow and its crops don’t cause harm for the environment. We are focusing on millet because it’s a climate resilience crop. Most of our women don’t have any irrigation facilities, they are all in rain-fed areas. We also work to stimulate multi -crops, so that even if they lose one or two crops they still have a different variety to eat.

Millet Network advocated with the central government to come up with the food security bill that passed which included millet in our Public Distribution System (PDS). Since India got independence, we have had a public distribution system where you get basic essentials at a controlled rate. As far as our State’s PDS is concerned, it is universal, so all of us get it. And rice is given free of cost. All of us get five kilograms per person, free of cost every month. That affected the nutrition of the people.

Rice is easy to cook and you can consume it without any additional vegetables. The poor families were just eating rice alone, so there was a need to focus on another crop that was more nutritious, and that is why we went to millet and multi-crops. The central Government passed the Food Security Act and now families can choose between receiving rice or millet. Besides that, we are part of the Food Sovereignty Network, the National Farmers network as far as the food and agriculture work. We are also members of various human rights networks and the National Women’s Group NAWO.

What has been the role of the Women’s Collective during the covid-19 pandemic?

During the coronavirus pandemic, agriculture was the only sector which was active. During the lockdowns, the government closed everything except agriculture, so a lot of workers lost their jobs, but farmers were allowed to work. Our women have become more powerful in the villages, because they were able to produce and share food. People were not able to move out of the village and go to nearby towns to buy things, but they were able to go to the farms in the villages and buy food. We strengthen our organization giving recognition for these women’s work.