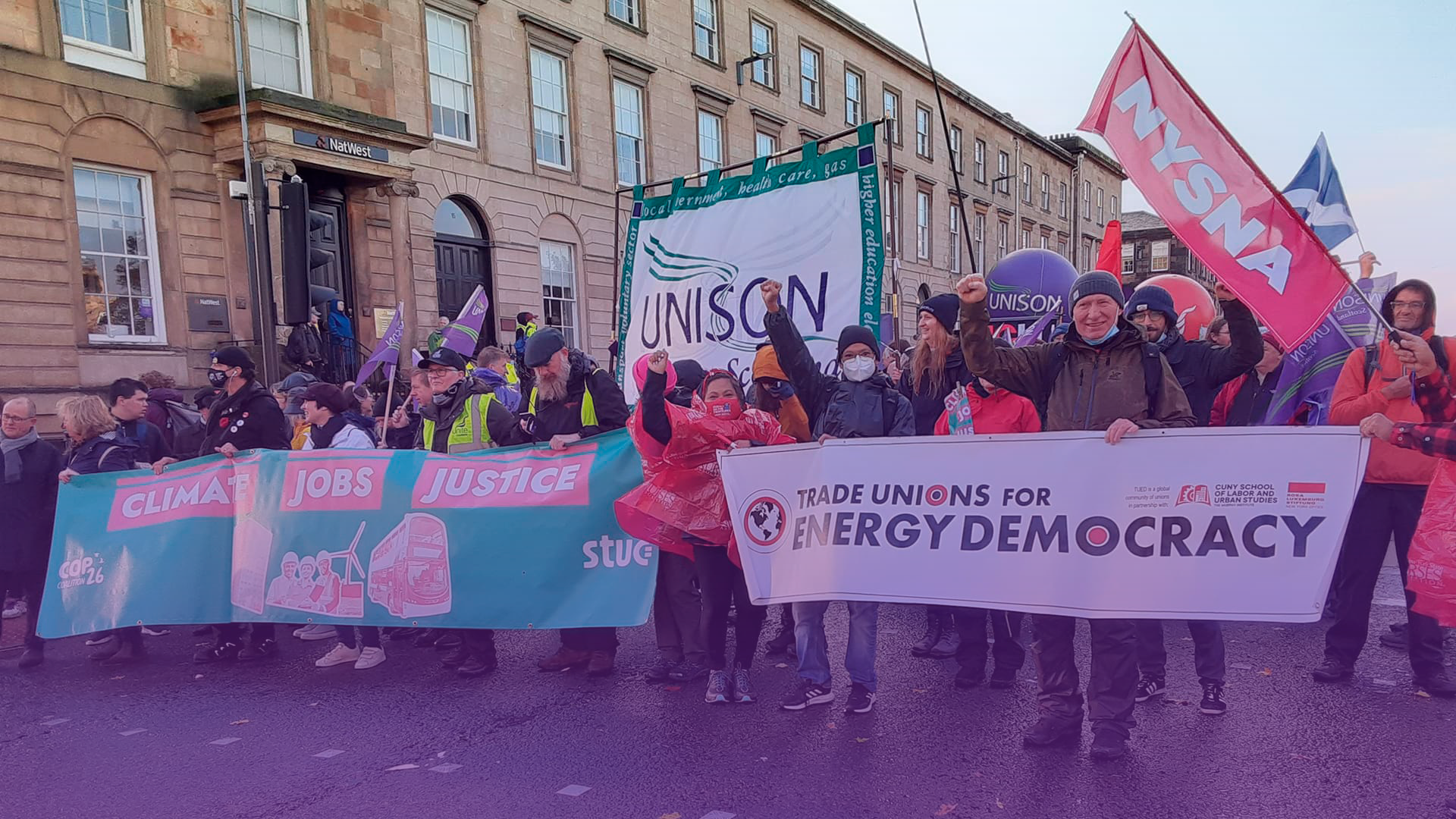 The trade union movement has built articulations and struggles for a just energy transition, as a central axis to put rights at the center of climate policy. Capire interviewed Irene HongPing Shen, from the Trade Unions for Energy Democracy (TUED). TUED is an international network of unions with participation in 93 unions in 27 different countries, built ten years ago around the need for an alternative narrative against the green growth model of addressing climate change. Claiming a real energy transition and questioning neoliberalism, TUED’s strategic proposal is public ownership and democratic control of the energy sector.  During our interview, Irene presented TUED analysis and proposals and also the challenges to engage more women in this debate.

Climate policy in general is ultimately energy policy. The current energy policies are all based on neoliberal mechanisms that essentially prioritize profit accumulation and are trying to use the crisis of climate change to continue making money. So the idea of the public ownership of energy is that we’re trying to take the energy sector out of a privatization model of functioning. That is not ideological. It’s actually based on facts, data, research, and looking at how neoliberal energy policies have been completely ineffective in the last decades in terms of meeting climate targets. There is no energy transition. The subject is popular, but we’re not transitioning anywhere, we’re going backwards with an energy expansion. There is an absolute need to have an alternative way of thinking about it that puts ecological and human needs at the center.

One of the problems with neoliberal energy policies and prioritizing profit is that everything is planned and organized around the need to make more money. There’s a huge lack of investment in different models because you can’t make money of renewable energy in a competitive market system. If there is a public system, you can create a set of plans for how best to implement a transition that also centers the needs of workers and other constituencies. In terms of workers’ rights, without a plan to transition, you really can’t center the issues that we want to advance justice.

The way I’m talking about it makes it seems simple, but going to transition is so complicated. In every region there are different sets of conditions whether is the weather or the conditions of the geological terrain, old infrastructure or social political specificities. All these things have to be thought about, accounted for. A lot of the battle is going to be against private corporations, but also the battle for centering workers’ rights, a women’s and indigenous’ platform. The struggle for justice will continue, but I think the framework of public ownership actually sets a particular set of conditions where the struggle can actually be won, we can potentially see real advancements. Of course, not all unions are on board with a public pathway. However, the unions in our network recognized at the very least the need for this debate.

One of the mottoes of this struggle is that energy is not clean if the work is not proper and rights-full. What’s the role of women workers and women’s struggles in this dispute?

There are some fundamental tensions between a feminist perspective on the world we want to move towards, and how the energy sector has been used to exploit and drive expansion of extraction. The energy sector is completely male-dominated. So decisions and discussions about energy were rooted in that space, the voice of women was just pretty much absent. Now we’re at this very complex crossroads that exposes the differences between a politically feminist perspective, and the reality of what we’re dealing with in terms of the climate crisis. From this comes the need to move towards a different kind of energy source, but also potentially a different kind of energy use by integrating a feminist approach to the discussions.

When we talk about energy, there are so many layers of technical issues and political elements that need to be unpacked and understood. In general in the movements there is not enough understanding of the technical aspects, and there’s a need for more women to engage around it. Often I’m in spaces where there’s a clear desire and push for more feminist thinking and perspective, but there is a lack of ability to engage more deeply in what’s needed. I would say it’s not just women that are lacking in this area. Regardless of gender, people are lacking understanding the technical.

In the feminist movement, we talk about how it is necessary to change the productive system and at the same time rethink the consuming. Part of the problem with corporate power is the way they produce energy and the way they consume energy themselves. How’s the debate in the unions around the consuming of energy and energy poverty?

People that really don’t have any access to electricity at all are concentrated primarily in sub-Saharan Africa, with Asia-Pacific probably being the next largest population. Also, there are millions of people that had access to electricity but lost it because of the costs of energy. The question about energy poverty and the desire to give people access to energy raises a really important and very complicated issue, which is: if you’re going to give access to hundreds and millions of people, then you’re going to drastically increase the demand for energy. So how do you facilitate the process of making electricity available while dealing with the reality of the need for a kind of energy source that is not going to create more emissions? We do not have an answer for that.

As trade unions, we want to debate on how do we confront this problem.

Without that, you cannot even start to unpack or disentangle these issues. Under a neoliberal set of energy policies, they’re never really trying to achieve just the goal of increasing access to electricity, they also have a much bigger agenda to enrich the private sector and investors. That’s a contradiction that you can’t really resolve, so the public framework has to be the first step.

Also, the exploitation of our bodies, labor, and reproductive capacities as women workers has existed since the beginning of class societies. To challenge that fundamental oppression of women, the exploitation of our resources and our human labor and skills, we have to challenge the economic system that continues to put us in this situation. TUED’s analysis is rooted in a class analysis. It understands the need for economic change for an just energy transition, because the energy sector is the backbone of the economic system globally. And, if we’re going to really center a feminist platform and think about a care economy, one where women’s work is valued, where extraction is not exploited, the models of neoliberal energy policy will be challenged. And I think that the public ownership of energy is part of the foundation of this feminist platform.

Our role in TUED is offering research, data and a potential analysis to be debated among the trade unions. In many places the role of trade union movement has become weakened over the last decades as privatization, and neoliberal policies in lots of sectors have increased. In the climate space, the sort of default position is that as workers, we want to seat at the table but not only that. There’s a need to be a real trade union response. Not one where we’re at the table to negotiate, because once you get there, you’re already negotiating under a framework that is not going to work in any front.

For example, in France in the end of 2020 into 2021, Macron government was trying to privatize their public owned energy company. The workers recognized that if it moved forward, they would not be in a good position. The wages would be going to go down, the benefits would disappear, hours would get extended. So, the unions launched a massive strike for months, and then they won. They saw the privatization of that energy company as a threat to them. In South Africa, unions are for a long time trying to organize between them to have a united front, besides their political differences, to fight against the privatization of energy. The history of privatization in the country has led them to this point where load-shedding is happening constantly. It makes doing any kind of business impossible. Trade unions have to realize that they need to be more vocal and coming together can be a strategic move to challenge the path towards privatization.

Climate crisis is here, and we need to do something about it. There’s got to be a lot of internal organizing and discussions within unions and social movements to think about what that means for their particular workers. How do you fight for the rights, the benefits that you currently have, and the wages to do not disappear in a transition that is unquestionable. We see a public framework as a critical first step to being able to have these conversations and a reclaiming of the energy sector, so that it’s absolutely mandated to the public.

Miriam Miranda: “There Is a Genocide Against Us, the Peoples Who Defend Nature”