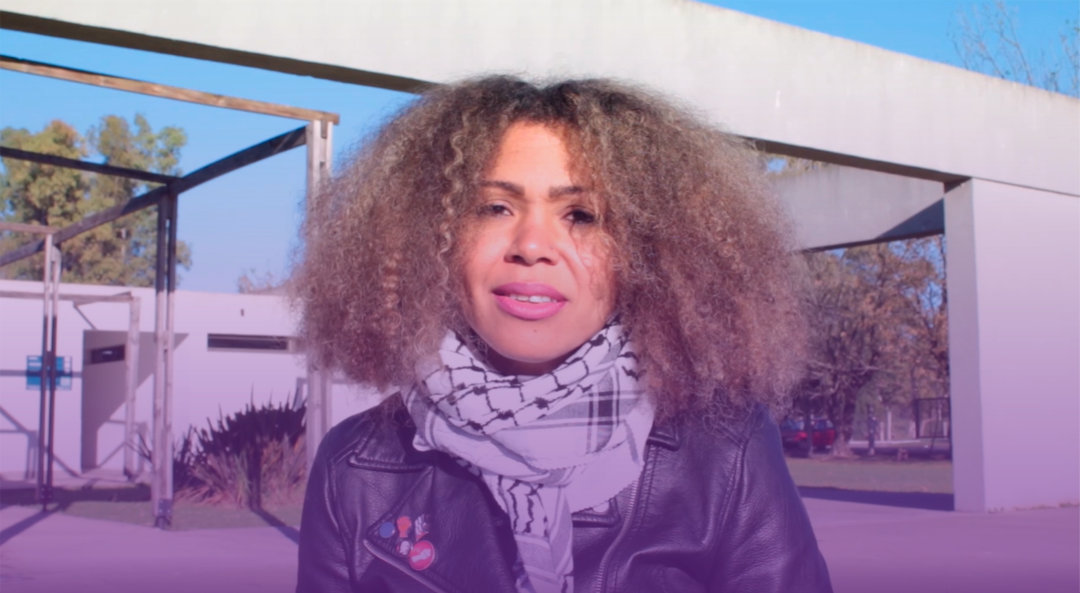 Claudia de la Cruz: “In the US, You Can’t Have Free Health Care, But They Can Fund a War”

Read or listen to the interview with Claudia de la Cruz about Black, feminist, and anti-war struggles in the United States

Claudia de la Cruz lives in the United States and was born to immigrant parents from the Dominican Republic. She is a member of the Popular Education Project, a collective of community organizers and popular political educators and leaders waging different struggles. She is also a co-founder and director of The People’s Forum in New York, a space that helps create bonds between social movements in the United States and internationally.

Claudia spoke with Capire during the 3rd Continental Assembly of ALBA Movements, held in late April in Argentina. She talked about the links between feminist, anti-racist, and anti-imperialist struggles and cautioned about the traps of fragmenting and trivializing movements. She also shared her perspectives on the current Joe Biden administration, of the Democratic Party, in the United States, the setbacks in the presidential agenda, and the advances of militarism. While this interview was granted two months before the 1973 landmark Roe v. Wade decision was overturned, endangering the right to abortion in several US states, Claudia already warned about conservative initiatives in different states against women’s autonomy. You can listen to the full interview in Spanish or read the translation below.

Let’s talk about imperialism. How do you see the joint efforts between anti-imperialism, anti-racism, and anti-capitalist feminism in everyday struggles?

You can’t put human beings’ lives in different pockets, spaces, sections, or compartments. All spaces impact our lives in what we are or are not. So when we talk about race, gender, or class, we can’t break them apart or think that they don’t impact human beings’ lives. I think this is a good start, because, in societies, movements have been broken up, where you talk about race, but not class, or talk about gender, but not class, or talk about class and not gender, race, or ethnicity. Capitalism itself feeds off of the separation between these struggles.

I am the daughter of immigrants. What imperialism does at a global level has caused migration from many countries, not only the Caribbean or the Dominican Republic, but from many impoverished countries. As someone living in the United States, I am the result of what the US has done around the world. We cannot ignore the huge impact that capitalism has at a global level, in which imperialism is its biggest manifestation. Capitalism and imperialism have benefited from the exploitation of a very particular sector of the working class: women and Black and Indigenous people. Again, this is the result of many processes: we can talk about colonialism, about what slavery and racial segregation mean, and about how beneficial it is to capitalism to be able to drag these curses with it. They are curses on us, but beneficial to them.

I cannot fathom a feminist movement that is not class-based, anti-imperialist and anti-capitalist. Capitalism benefits from patriarchy and pursues its own means to divide and conquer. We need an anti-imperialist perspective exactly because it is women’s bodies, our lives that are impacted by imperialist war. Let’s not forget what the blockade has done to Cuba. Women and children have been suffering for more than 62 years with an unfair and immoral blockade. That’s what they are doing in Venezuela as well—it is mothers, women, children, and families [who struggle with the blockade] there too. These are feminist, class, and race issues. We are talking about a global South that is Blacker and more Indigenous than the North.

Unfortunately, in the United States, where I live, a narrative emerges about a kind of feminism with no class identity, a very cosmetic kind of feminism, that manifests in an imperialist fashion, putting women in spaces that promote war and social inequality. But somehow it is as if we had to accept it because it’s a woman doing it, and “yay, women’s power.” Not all women are the same, just like not all Black people are the same.

The politics of representation has done that, putting people there who look like us, but whose politics and inclinations aim precisely to hurt the working class and the dispossessed. When we talk about feminism, we cannot eliminate its class component, we can’t remove it from the mark from which patriarchy was created. Patriarchy is created precisely for the benefit of capitalism.

I believe there are very similar and converging realities. If we talk about the majority of Black working-class women in the United States, if we talk about 99 percent of the population who live in poverty or close to it, we have a lot in common with Black and Indigenous women from the South. What makes us converge is our material conditions: lack of access to health care, education, jobs that allow us to have a decent life, lack of rights.

In the United States, what used to be a reproductive right of women is right now facing setbacks in Texas and other states. Women are criminalized because they don’t have access to reproductive health care services, because not everyone can afford birth control pills, not everyone can go to a gynecologist, not everyone has access to the internet or sex education. We are criminalized for things that are systemic and have nothing to do with a personal decision. This also happens in the global South: criminalization for lack of access, for being poor, for not being able to decide over our own bodies. We have a lot in common. Unfortunately, capitalism and imperialism work in a way that divide us to conquer us, and many of us do not see these connections.

We have many challenges to give continuity to this outrage that happened with the recent murders and with what the Covid-19 crisis produced. In the summer of 2020, that ultimately happened in the election process, with the battle between Trump and the Democratic Party, Biden, and more progressive sectors. Amid this disputed space, many decided: “Let’s form a coalition against Trump.” Many liberal, progressive, and even left-wing sectors came together, with the representation of immigrants who experienced severe setbacks during the Trump administration, with Black people, who were very dejected precisely because, under Trump, this racist and fascist wave was exposed. Because there was no other more radical option, they started to push Biden as an option—the least harmful option, they said.

After Biden won, we forgot that we had to continue to struggle. Many of these groups that were becoming stronger—the immigrant sector, the Black sector, the poor sectors that were joining efforts around the right to a decent wage—started to break up, because “Biden was elected,” “we won.” What we have seen and many of us knew is that Biden does not have the answer to the problems of any of these working-class sectors, because the Democratic administrations in the US ultimately attack more Black, immigrant, and poor populations than any other administration. What happens is that, under Democrats, this is done more covertly. Republicans are more overtly racist. Democrats hide it a bit through language, but it is the same.

Under Biden, reproductive rights laws have been challenged. And it is in the Biden administration that social projects are no longer funded, no policies are approved to benefit the working class. Meanwhile, he has passed a US$ 180 billion military budget for 2023. Biden, the Democratic Party, and the Republican party are interested in defending global capitalism, protecting their hegemony, reaching a point where they become legitimate again.

In US social movements, we have been through a process of breaking up due to the 2021 elections, and we are still trying to recover and reunite—also because of Covid-19. It is not a “post-Covid” society: we are still living a reality where thousands of people are getting sick and dying. There are other long-standing factors, such as the intervention of non-governmental organizations that push a liberal agenda. Again, there are displacements, and many organizations have lost their physical spaces. We struggle from a position of reacting to what they do to us, and not from the position of joining efforts and creating strategies that will allow us to push political agendas in the long term.

The communities are organizing with each other: they organize to donate food to each other, to be able to survive amid the pandemic. This makes it clearer that we can save ourselves and increases the people’s faith in themselves. There are many young people who are interested in learning more about socialism. But all that requires guidance, and that’s the big challenge. How do we join organizing efforts and create unity based on common principles and common guidance?

What are the movements’ strategies to face imperialism that promotes war through the power of the United States and NATO [North Atlantic Treaty Organization]?

The United States is the world’s biggest perpetrator of violence, domestically and abroad. We have an army with a bigger budget than the budget of many countries.

People are saying what they used to say back in the time of the Vietnam War: what have those people done for us? Why should we fund this war? Why should we give them weapons? What is the goal of the US against Russia? What is its interest in Ukraine? Why the war in Afghanistan? Why the war in Iraq? How has that impacted us, the working class? People are questioning that. I think that when the people of the United States questions this kind of thing, great things can happen if there’s a movement capable of organizing this discontent.

Some sectors have been historically engaged in anti-imperialist and anti-war struggles, and they are trying to assess the situation. They clearly see that the US is positioning itself geostrategically toward China and that the Ukraine-Russia conflict is a pathway toward that. The challenge is that there are also progressive, liberal, and anti-war sectors that are not necessarily anti-imperialist, and the conversation between these two sectors has been conflicting, because the latter do not aim at the global enemy, which is NATO.

The common enemy, the global enemy, the enemy of Ukraine, Russia, China, and all countries in the world is NATO, because, as long as it is there, it will have a global impact. Right now, it is impacting us through increasing gas and food prices. All this has to do with the war. The United States wages war there and hybrid wars on this continent, trying to regain its hegemony. The top priority for the Biden administration is: how do we go back to rule politically, economically, and militarily?

We have to be very vigilant as movements, and be prepared to identify who the real enemy is.