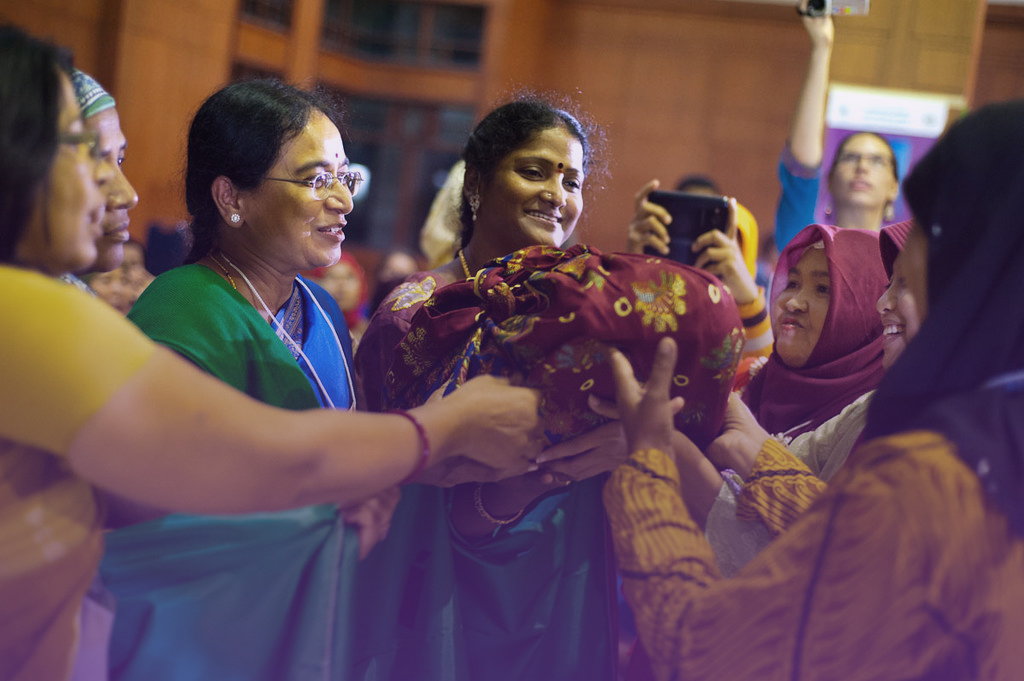 The first meeting held by La Via Campesina took place in Managua, Nicaragua, in 1993, and it was attended by male leaders. Neither the Managua declaration or the following Mons declaration—when La Via Campesina was established as such—mentioned peasant women.

Later, in 1996, we met in Tlaxcala, Mexico, and it was an amazing assembly. We helped the organization and mobilization from my space. And we had no idea how wonderful, broad, determined, and energetic peasant organizations from across the world were. How there was huge representation in that assembly!

By then, women already made up 20 percent of the assembly. We organized parallel discussions and created a women’s working group. One day towards the end of the event, there was a process to elect an International Coordinating Committee (ICC), to be the center of this recently established movement. There were eight regions back then, one of which was not effectively established, and each region held a meeting to choose their regional coordination. When they came back to the assembly, seven men had been selected.

There was tension in the room. Many of us women were not happy with this representation. There was resistance, so the regions had to hold a second round of selections and try again. I was selected to represent North America. We were able to break that barrier that excluded women from leadership positions. I took part in the ICC for eight years.

I personally felt this huge responsibility, but I have always been surrounded, embraced, and supported by amazing women and men of La Via Campesina, who shared this vision of creating a movement for equality and justice to truly change our lives, communities, gender relations, and agriculture—and, from that, to start huge, necessary changes in the world. This is why I have never felt alone, abandoned, or unable to build that space.

Our work was particularly focused on showing and effectively integrating the issues, knowledge, and leadership of women into the movement. We knew the peasant movement had a lot of leaders and methodologies around the world. Particularly, from my experience, I can say we greatly supported and worked persistently with peasant women from Latin America, who already had very strong joint efforts among women, such as the Latin American Coordination of Rural Organizations [Coordinadora Latinoamericana de Organizaciones del Campo—CLOC]. We, from La Via Campesina, started to broadly adopt these experiences. These methodologies included working collectively, sharing experiences, and strengthening women in the movement.

We worked with our male comrades, of course. But we needed our own spaces of articulation, in our own way, to define our priorities. We needed spaces to learn together and appreciate our women’s experiences, knowledge, and analyses, where we could build trust to express ourselves and thus have our voices heard. We needed to show that these matters were fundamental to achieve the deep changes we all wanted to push forward. We used this methodology frequently and very effectively.

By the 2000 assembly in Bangalore, we, women, had drafted a positioning statement. In our view, women’s participation was working, but we wanted not only participation, but equality in the decision-making mechanisms of La Via Campesina’s board. And we were not going to wait around to achieve that. We needed to acknowledge, in La Via Campesina, that this was a structural matter. We needed to make sure there was always room for women and that they would take up that space.

We then adopted a structural parity during that assembly: each region would have not one coordinator, but two, who would take part in the ICC. They would have to be a man and a woman. That came from peasant feminism, deeply rooted in my grassroots organization. And this is how we work: we bring food that we enjoy in our own kitchens for everyone, collectively. It was a huge change for La Via Campesina and a huge progress in the way we work, organize, and develop women’s leadership. It is perhaps a unique case in rural social movements in terms of gender equality and parity. We continue to struggle for gender diversity to secure spaces not only for women and men, but for the entire diversity of genders, which must be welcomed in the movement.

As women, we must always remember that the struggle for equality is in every sphere of our lives: in our homes and families, because patriarchal families are founded in patriarchy; in our communities; and in our organizations. I mentioned earlier that we have had gender parity since the beginning of my organization, but we remain aware that inclusion, diversity, and equality entail continuous work. Internationally, we continue to face these challenges.

Patriarchy is deeply rooted: it is in our religious cultures, our traditions, and our communities. It is such a ubiquitous structure that views the world in a certain way and establishes hierarchies between men and women, we must continuously challenge it everywhere, in multiple manners.

Our feminist view and leadership in La Via Campesina has been one of the most wonderful and powerful gifts we have given the movement. I think we have to celebrate. We have changed the way La Via Campesina and our peasant movements work, and the mística [grounding spirituality] is part of that. We have strengthened and changed the matters La Via Campesina is able to challenge and fight: violence against women, defense of seeds, defense of land, demand for social protection… A lot of our work in all these matters is deeply guided by our perspectives as women who struggle. Our strength was able to include them as key matters. We must not underestimate how vital and important this is, not only for La Via Campesina, but for the global struggle around these matters. In many places and thanks to our work at La Via Campesina, we have managed to nurture and globalize hope.

Read the call to action #25Nov22 by La Via Campesina, with the slogan “We defend Food Sovereignty and our territories from violence, evictions and agribusiness.” Peasant women demand food sovereignty, the right to land, and the end of criminalization and all types of violence in the countryside and the cities. We also denounce the alarming numbers of violence against women, children, and diversities amid times of food, political, and economic crises. This is why “there is an urgent need to build societies free from violence and peaceful communities with social justice.”

La Via Campesina is celebrating 30 years of struggles, hopes, and organization with the hashtag #LVC30Years. Soon it will also start its VIII International Conference and the VI Rural Women’s Assembly, spaces of discussions, decision-making, and collective movement-building, coming up in November 2023 in Nicaragua. As it prepares for these events, it shares the publication “The Path of Peasant and Popular Feminism in La Via Campesina” as two versions, one for studying and a graphic version for grassroots work.