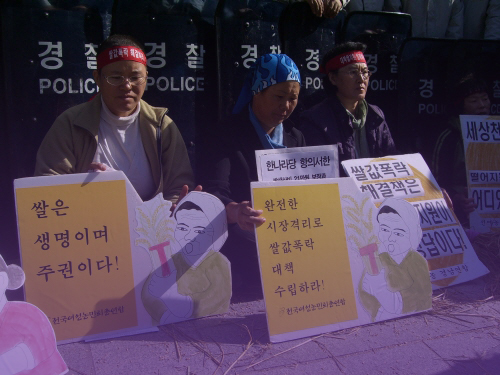 Our time is one of different crises: the COVID-19 pandemic, the climate crisis, the food crisis, war… A new era of “cold war” gets closer as the US imperial hegemony collapses. Although the neoliberal capitalism seems to be collapsing, it renews itself by using the World Trade Organization (WTO), the United Nations (UN), and other international institutions to try to rebuild the global economy.

The war crisis is an inevitable consequence of the neoliberal economic system, as the war provides a destination to the surplus produced by this system. The surplus are the weapons on which the United States’ survival depended. War is also a product of a patriarchal capitalist society.

And what about a post-pandemic society? Reflecting on capitalism as a disastrous system that causes the crises we experience is key. We need a deep innovation, not a renewal of capitalism. We need a transformation from the capitalist system to a system focused on harmonious coexistence between people and nature. By overcoming neoliberalism in our subjectivity, we will be capable of seeking a system not based on endless competition and focused on the individual, but on cooperation.

We, Peasant Women, Are Going to Create the World’s Future

The climate crisis is urgent. Within this context, agriculture has become an important matter for the humanity’s future, and women play a key role in it. We need to rescue the dignity of the human being. Women must assume their place as relevant agents, as they have a central role in promoting food sovereignty.

Peasant women’s collective is complex, and its intersectionality needs to be understood in relation to class, ethnicity, race, and location, which the capitalist system uses to exploit and oppress women. Within the neoliberal capitalist system, women are affected not only by labor division per gender and race, but also by free trade agreements, mining, GMOs, wars, and other domination tools.

Patriarchy has existed in different moments of history and imposed standards of behavior and domination on women’s bodies in society, relegating them to a subordinated position. The patriarchal system is supported by private property and by the class-based society. It shows us that, in order to destroy the patriarchal capitalist model, we need to fight the class system and gender roles.

To reach gender equality in rural areas and in agriculture, we must eliminate the sexist culture and fight gender violence. This is the only way by which we can achieve gender equality in the countryside, contributing to building equality throughout society.

We are the main agents of this struggle and we do it on behalf of all women, so that we can turn food sovereignty into reality. The woman who struggles is majestic. We must disrupt inequality and respect life, because it is how the change begins. Let’s actively struggle for change. Let’s resist every type of discrimination. True freedom translates into structural and everyday transformation.

Geum-Soon Yoon lives in Seongju, South Korea, and is a member of Korean Women Peasants Association – KWPA and La Via Campesina. She gave this speech during activity “Our History and Challenges Towards a Non-Violent Movement with Inclusion and Respect” held on August 10, 2022 by the women of La Via Campesina.

La Via Campesina is celebrating 30 years of organization, collective struggle, and work to defend food sovereignty and peasant rights. On this occasion, it is launching a call for its 8th International Conference (#8IConfLVC), to take place in Managua, Nicaragua, November 23-28, 2023, with the slogan: “Faced with the global crises, we build food sovereignty to ensure a future for humanity!” Around 400 people with peasant and Indigenous organizations from around the world are expected to take part in the event. #LVC30Years

Amid this context, it will also hold the 6th La Via Campesina International Women’s Assembly, with the motto: “By rebelling we sow peasant and popular feminism, produce food sovereignty, and organize ourselves to fight multiple crises and the violence they cause,” and the 5th Peasant Youth Assembly. These organic spaces represent moments of discussion, assessment, exchange, and building of the political agenda of the movement, which includes Indigenous and peasant peoples, women, wage earners, migrants, landless people, and LGBT+ people who propose alternative models to capitalism, agribusiness, and extractivism.