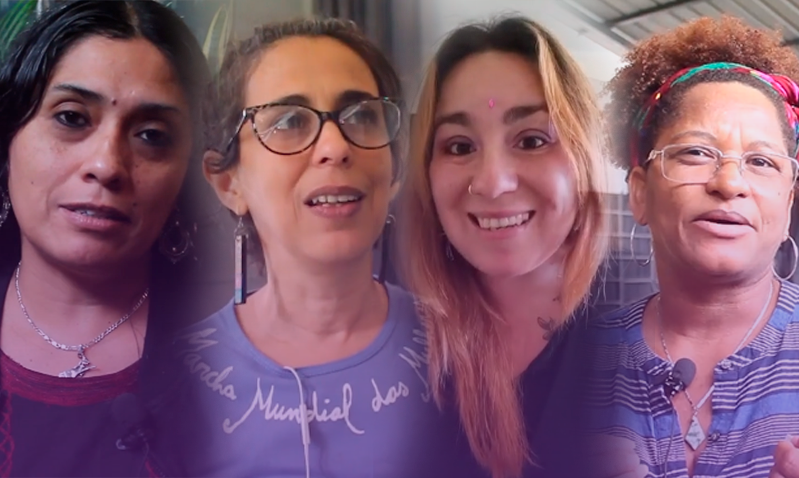 The Berta Cáceres Feminist School, of the World March of Women Americas, took place from May to September 2022. During virtual meetings held every two weeks, more than 40 women from 22 countries in the region reflected together about systems of oppression, feminist economy, and movement building. We share below a video with accounts by World March of Women militants who took part in the School, as participants or facilitators.

This regional school is another development of the Berta Cáceres International Feminist Organizing School (IFOS), organized in 2021 by the World March of Women, Grassroots International, Grassroots Global Justice (GGJ), and International Indigenous Network (IEN). “To me, this ability is very important, which we showed at the IFOS, the School of Facilitators, and, of course, the school of the March Americas, to go beyond limitations and overturn them completely,” said the Venezuelan Alejandra Laprea.

To bring participants closer to one another despite the distance between them and the limitations of the virtual environment, the School of the Americas proposed different methodologies. As Alejandra Pérez, from Chile, reported, “the group works, sharing experiences, appreciating our different kinds of knowledge, and art expressions are some of the elements we used to discuss the topics proposed by the School. And that was exactly from that that reflections, emotions and new knowledge emerged in each session.”

Norma Cacho said, “we came to the school with many expectations, both methodological and political, and the clear aim to make the School a space to further conversations, discussions, especially on disruptive feminist economy, which has been our proposal, our political project as a movement. The Dominican participant Ligia Perez said that attending the Feminist School has “allowed and will allow us to facilitate more advocacy processes, to identify what are the conflicts in our organizations, how to move forward, how to study them politically, and, in our case, as women, to see us, from the care economy, to see women as the center of life.”

Words by Helena Zelic
Translated from Portuguese by Aline Scátola