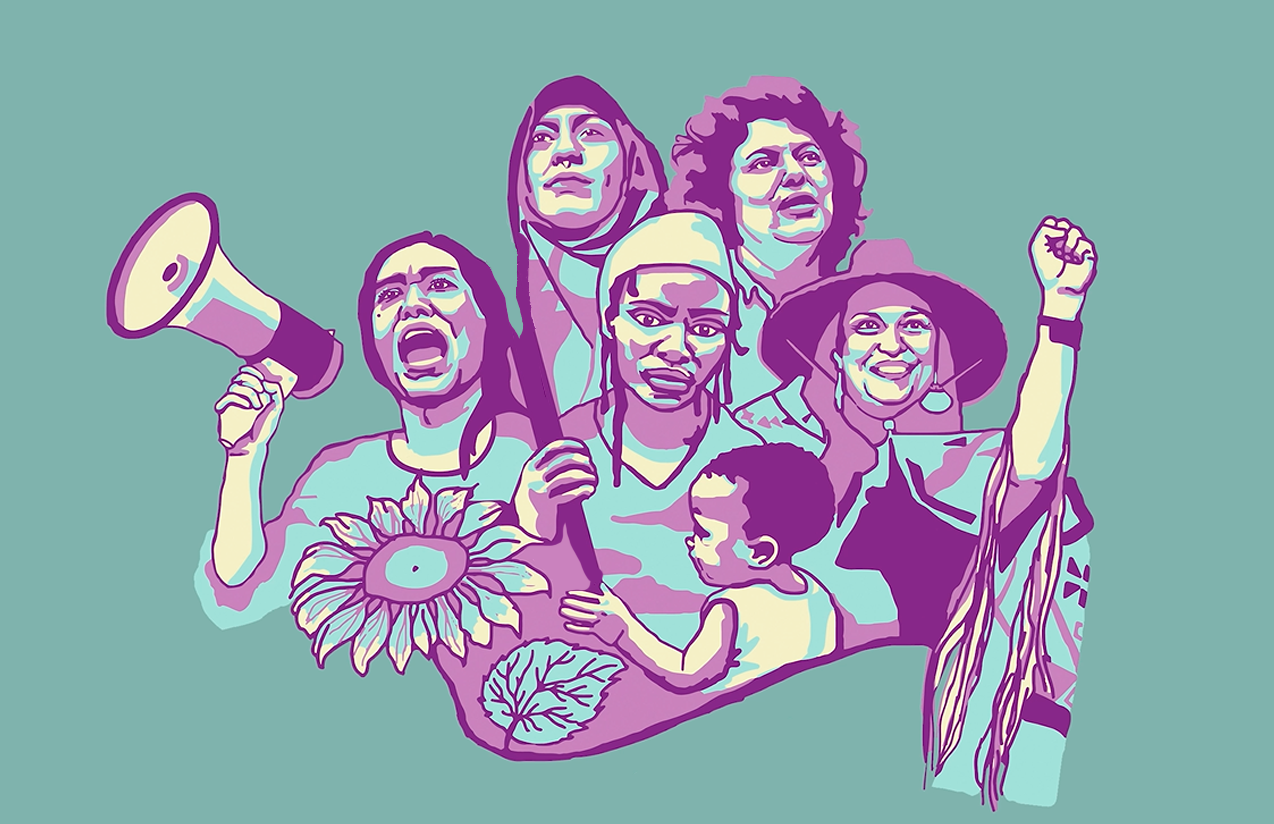 In 2021, an alliance between the World March of Women, Grassroots International, Grassroots Global Justice (GGJ), and the International Indigenous Network (IEN) organized the first edition of the Berta Cáceres International Feminist Organizing School (IFOS). Women from all continents, militants of grassroots organizations, attended it. The school was not just one insulated course: it was built to be the basis of a continuous process of grassroots feminist education, as part of a strategy to build and strengthen grassroots feminism. The e-book with the curriculum and the basic content of the School was published a year after the School was launched, and it was produced to help multiply this experience across different regions.

In 2022, based on the lessons learned at the IFOS, the organizations started new processes: an international school of facilitators, as well as regional schools in the Americas and the Balkans. Grassroots education is the basis of the feminist methodology that organizes the subjects of the schools. Grassroots education is grounded in diversity, in the understanding that there is no such thing as one and only kind of knowledge, and that everyone has something to learn and to teach. So education happens in groups, based on the contributions from everyone who is taking part in it. In these processes, women and gender nonconforming participants find a rich space to exchange information, reflections, knowledge, wisdom, and cultures.

The School of Facilitators aims at introducing tools to multiply political education. Nearly 100 women and gender nonconforming people took part in the online activities, starting April 25th, 2022 through to March 2023, when a manual of methodologies and techniques will be presented.

Reaching a deeper political and pedagogical understanding of feminist education spaces is a key objective to strengthen the women’s movement itself. School participants, as they practice, explore, and create education practices, gradually put themselves in the place of facilitators in movement-building political processes. Political education always follows action.

Sophie Dowllar, a WMW militant in Kenya who attended the school of facilitators, said that having a learning experience among sisters in arms makes the process even richer. “I have learned so much. From  methodology, to new ideas of planning and organizing to how to break down difficult messages at the community level… Especially given all the topics that we had: from understanding the systems of oppression, to learning more about how to continue building the movement.”

There is no single model to follow: as they bring what they have learned back to their territories, the women transform the methodological tools according to each reality and the complex aspects of people’s lives. “When we think about women, it becomes stronger, especially from this perspective of looking at the systems of oppression, at how intersectionality intertwines these forms of oppression. Therefore, what it means to build this political actor without rendering women invisible as actors,” argues Nalu Faria, a member of the School’s methodology group.

The School of Facilitators follows what the IFOS was, proposing a profound assessment of this experience, with its strengths and challenges. The group of participants includes women who attended the IFOS, as well as other militants of the World March of Women, GGJ, IEN, and Grassroots International. The proposals formulated by the participants are based on their reflections on the principles of grassroots education, on what it means to be a facilitator or a political educator. “At this School, we have a lot of expectation of really ingraining a process of regional and national schools,” Nalu says.

The “Berta Cáceres” Feminist School of the World March of Women Americas is a development of the International School. The women of the World March Americas share common stories and experiences of struggle and have proposed to take their own moment to promote political education and exchange, based on the experiences accumulated from the IFOS. It is an opportunity to have discussions and create a collective space of reflection.

The women who had attended the International School got involved in the work teams for the regional school as part of the multiplication tasks. This process also includes strengthening the alliances between the WMW and allied movements, such as ALBA Movements, the Caribbean Peoples’ Assembly, CLOC/La Vía Campesina, Friends of the Earth, and the Trade Union Confederation of the Americas. The participants were appointed by the WMW’s national coordinating bodies and the alliances, which promote a diverse group from 24 different countries, expanding participation from Caribbean countries, a sub-region the WMW plans to strengthen.

The Regional School is a shorter version of the International School, addressing three modules: systems of oppression, feminist economy, and movement building, focusing on agendas that are part of the regional reality of the Americas, such as the anti-racist struggle. Feminist economy is presented as a strategy for change to end systems of oppression. Marie-Hélène Fortier, a militant of the WMW Quebec who attended the school, says “the feminist economy pledge offers relevant leverages for an analysis that takes into consideration both the exploitation of women’s labor and the exploitation of the environment. We are looking forward to learning more and bringing these discussions back to our organizations.”

Another pillar of the School is movement building as a process of awareness raising toward action. “The commitments that I believe we are making at the regional schools are precisely to continue to formulate how to further these ideas and materialize them based on feminism,” says Alejandra Laprea, a WMW militant from Venezuela who is also part of the methodology team. “The Berta Cáceres School offers a place for exchange with other WMW feminists, which we see as necessary to continue to have the movement endorsed in different regions of the world,” Marie-Hélène says.

Alejandra tells us that the experience of replicating the international school in the Americas is the reiteration of the March’s commitment to providing political education to its militants. “We believe that the processes of political education are absolutely necessary and essential to set in motion the creation of this political actor that is aware of the oppression they experience, feeling the need to change this oppression, and also have tools to end the system that oppresses them.”

The Balkans School was held in May this year in Cappadocia, Turkey, in a two-day meeting bringing together women from Bulgaria, Macedonia, Bosnia and Herzegovina, Albania, Romania, Armenia, Georgia, and Turkey. Zeynep Alica, a WMW militant from Turkey, attended the International School and was one of the organizers of the Balkans School. From the experience at the IFOS, Zeynep had the chance to see how grassroots education can be applied among women. “In my studies, popular education was just a theory, but the experience in Latin America is more improved. It was an opportunity to see how popular education and feminist pedagogy can be applied in education,” Zeynep says.

Their challenge was to adapt the methodology and the contents in a way that made sense to the women from their region. By sharing experiences at the international school, Zeynep better understood how colonialism is a concrete problem for countries in the global south, and connected it to the discussions taking place in her region. “We have a connection with the land issue and war, and also religious fundamentalism.” The School was the first meeting of a political education process that will continue so that women can reflect on their agendas of struggle in the region. “The experience was enlightening. The women went out of those discussions not tired, but high on these topics,” Zeynep said. One of the goals of this School was to provide a space for women from different organizations to meet and see themselves in each other, aiming to foster the WMW organization in the region. Mihaela Graciun, who attended it, said that moments of exchange such as the school are powerful to build internationalist feminism. “The key to our movement being successful is building stronger, wider feminist networks that can act as one in the face of repression but which can still gather as many and diverse voices.”

All these efforts to conduct regional political education processes based on the experience of the International School are essential to socialize knowledge and especially create a common language to understand the diversity of the movement.

Alejandra argues that the schools are a dream come true. “For so many meetings we have been talking, planning, and addressing how important political education is. Having consolidated and materialized the IFOS and regional schools is like a dream. It is nothing more than the achievement of the commitment of replicating the International School in our territories.”

Nalu says the Schools aim to “strengthen a space of reflection building a shared vision about the problems we experience, deepening the reflection from a feminist perspective. We strengthen the building of feminist economy as a political pledge, looking at how to deepen it in relation to dynamics and issues of the territories where we work. We also want the schools to become a tool for us to build ourselves as political actors.”