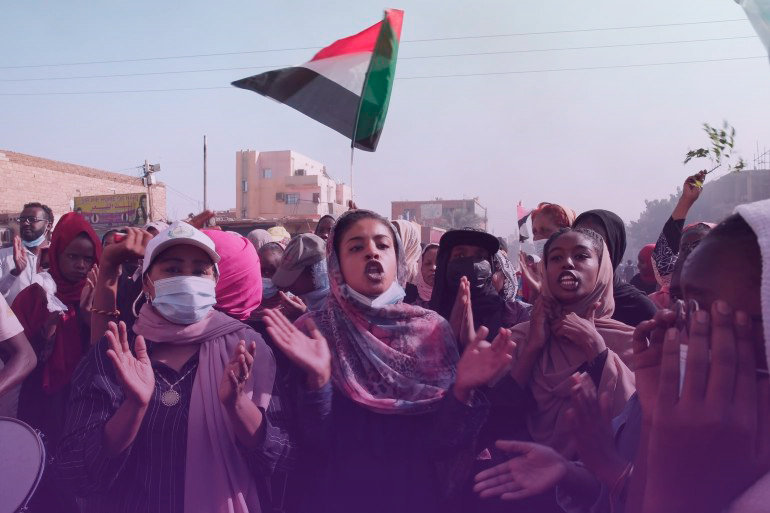 Electing representatives became a possibility in Sudan since its independence, in 1954. The National Islamic Front (NIF), led by the Islamic Brothers regime, was established in the early 1960s, but they failed to have representatives elected for parliament in any election process. So, in 1989, the NIF seizepower through a military coup, removing the democratically elected government. After that, the NIF established the National Congress Party (NCP) in 1999, in order to give itself legality and try to convince the Sudanese people and the international community that they were a democratic rule. The Front organized elections against all international standards, which made General Omar Al-Bashir, the leader of the military coup, the president of the state.

The NCP based its rule on their Civilization Project, as they called it, drawn from Sharia, the Islamic law. They used religion to convince people to follow them. It was an authoritarian dictatorship, an one-party regime characterized by harsh and suppressive practices. They issued many laws and regulations that restricted people’s movement and freedom of expression and assembly. They also banned other political parties from practicing their right to freely conduct political work. They detained opposition figures, and tortured and killed many human rights defenders.

While the NCP practiced suppression, aggression, and violence against all opposition figures, their members practiced all kinds of corruption, malpractice, and mismanagement of national resources. That resulted in enrichment and control of the resources by NCP members while the Sudanese people suffered with poverty and lack of means to satisfy their basic needs. During their rule, the economic situation was deteriorated in all sectors due to the financial sanctions applied against Sudan by the USA, international institutions, and other countries. Sudan was classified as a State Sponsor of Terrorism, which increased the country’s isolation.

The free system of education was cut by the regime. So many students had to drop out of school early because their families couldn’t afford to pay for their education. The health system was completely destroyed. To have any kind of medication, people have to pay a lot of money. The infrastructure of the country itself was affected. Roads, airlines, and construction works were all neglected. The people couldn’t afford to maintain living standards, a situation felt more heavily by women. Women couldn’t pursue their education or employment. This regime was all about trying to take women’s rights and dignity. Women have suffered for 30 year under the Islamic rule and have struggled against this regime since then.

In 2003, a conflict erupted in Darfur, a state situated in the western part of the country. More than 300 thousand people were killed by the government militias, and around one million people sought refuge inneighboring countries, causing massive displacement. The conflict based on ethnic reasons has created big fractions and torn the social fabrics among its people, who had been living in peace and coexisting for centuries. The pro-government militias have practiced systematic violence against women and girls from non-Arab tribes through rape, killing, sexual abuse.

In December 2018, a popular revolution broke in all of the states of the country, calling for justice and the right to live in better situations, under the slogan “Freedom, Peace, and Justice.” Women and youth played a vital role in the success of the revolution, which removed the regime that ruled the country for 30 years. The armed forces declared its support for the revolution, removed Omar Al-Bashir from power and named Ggeneral Abdel Fattah Al-Burhan as the new leader of the army.

The Forces of Freedom and Change (FFC) is the body formed during the revolution. It consisted in political parties, civil society organizations, armed movements fighting against the NCP government, and professional trade unions. Most of the groups that fight against the regime were born during the NCP rule. These groups were active since then and are very creative. They organized the struggles even without communication systems and made it work in all of Sudan. The leaders of the organizations are targeted by the military since before the coup, but they are not afraid.

The FFC and the armed forces started negotiations on how to administer the country after the success of the revolution. They agreed that there should be a transitional period for three years. By the end of it, an election should be conducted to replace the transitional government. They developed the Constitutional Declaration to govern the transitional period. A Sovereignty Council was established with the role of being head of state, composed of 10 civilians and 5 military.

Al-Burhan, the chairman of the Sovereignty Council, should have handed over the presidency to civilian representatives on 17 November 2021, as said by the power-sharing agreement and the Constitutional Document of 2019. The civilians choose one of them to chair the council, but on 25 October 2021, before the day to hand over the chair of the council to the civilians, Al-Burhan led a military coup and declared a state of emergency. He dissolved the government, detained all the ministers, placed the prime minister under house arrest, and disrupted the internet and communication services.

Immediately after that, the coup was reported and, despite restrictions on communications, protesters peacefully took to the streets to denounce the military’s illegal actions and demand the reinstatement of the government and a transition to civilian rule. People demonstrated in all parts of the country, denying and rejecting the procedures taken by the leader of the army and reclaiming a return to the democratic transition and the commitment to the Constitutional Document.

The continuous demonstrations, in addition to the pressure by the international community, resulted in the release of the prime minister and the signing of a political declaration between the military and the prime minister. They agreed to release all detainees. The prime minister was delegated to form the civil government until the end of the transitional period. However, the incidents resulted in serious violations of human rights against civilians, which have continued to occur since the Sudanese coup on 25 October 2021 to 23 November 2021. Internet connectivity has been restored only after weeks of disruption.

Despite the release of some detainees, we have deep concerns for the continued arrest of peaceful protesters. Joint forces of the Sudanese Armed Forces (SAF), the Rapid Support Forces (RSF), the Military Intelligence, and the police have continued to target individuals with arrests and detention based on their participation or suspected involvement in the protests. Peaceful protesters have been detained under the Emergency Decree. Three peaceful protesters were imprisoned without charge in Omdurman Women’s Prison. In Khartoum, journalists were blindfolded, taken to an unknown location, and threatened verbally for participating in anti-coup events.

Similar tactics were used during crackdowns against the 2018-2019 revolution. The well-documented use, by security agencies, of torture and other forms of ill-treatment against detainees, particularly whilst held in unknown locations, raises safety concerns. Sudanese authorities have continued to use excessive force, including firing of live ammunition targeting the upper parts of the bodies of protesters to disperse peaceful protests around Sudan, resulting in deaths and injuries of Sudanese citizens. A woman was beaten by military men in the demonstration held in Khartoum University, on 26 October 26 2021.

There are documented cases of torture and ill-treatment of detainees by security agencies. Detainees were beaten with hose pipes, iron bars and sticks, punched, pushed to the ground, and forced to shave their hair. Shaving off hair of detainees using the same blade without sterilization raises serious health safety concerns, as it imposes a high risk of transmission of bloodborne diseases. In Kotsi, White Nile State, detainees were in poor facilities, denied food, and only provided with water after 13 hours.

Authorities are restricting freedom of expression. The National Intelligence and Security Services have continued with their practice of summoning journalist for interrogation. Several journalists were arrested for covering the anti-coup protests. Just like in the Al-Bashir era, authorities have shut down a radio station and blocked two others from broadcasting in Khartoum without giving any reason.

In two days of demonstrations on 17h and 30 October, police forces killed 42 protesters, most of them youth and children. A 13-year-old girl was killed in Jabara, south of Khartoum, as well as many others aged 14 to 17.  Two women were detained in Central Darfur state, taken from their homes, fired from their work, and banned from receiving visits from their families. Due to inhumane detention conditions, a female detainee suffered a miscarriage.

Even amidst the violence, the military is suffering the pressure from the streets and the international community. They have to hand over power to civilians, because that was the agreement. People and organizations are using strategies of civil disobedience to fight back the impositions of the government. We will remain strong and fight until we have our democracy back. We won’t let the military rule us.

For safety reasons, the identity of the militant who wrote this article will not be disclosed.