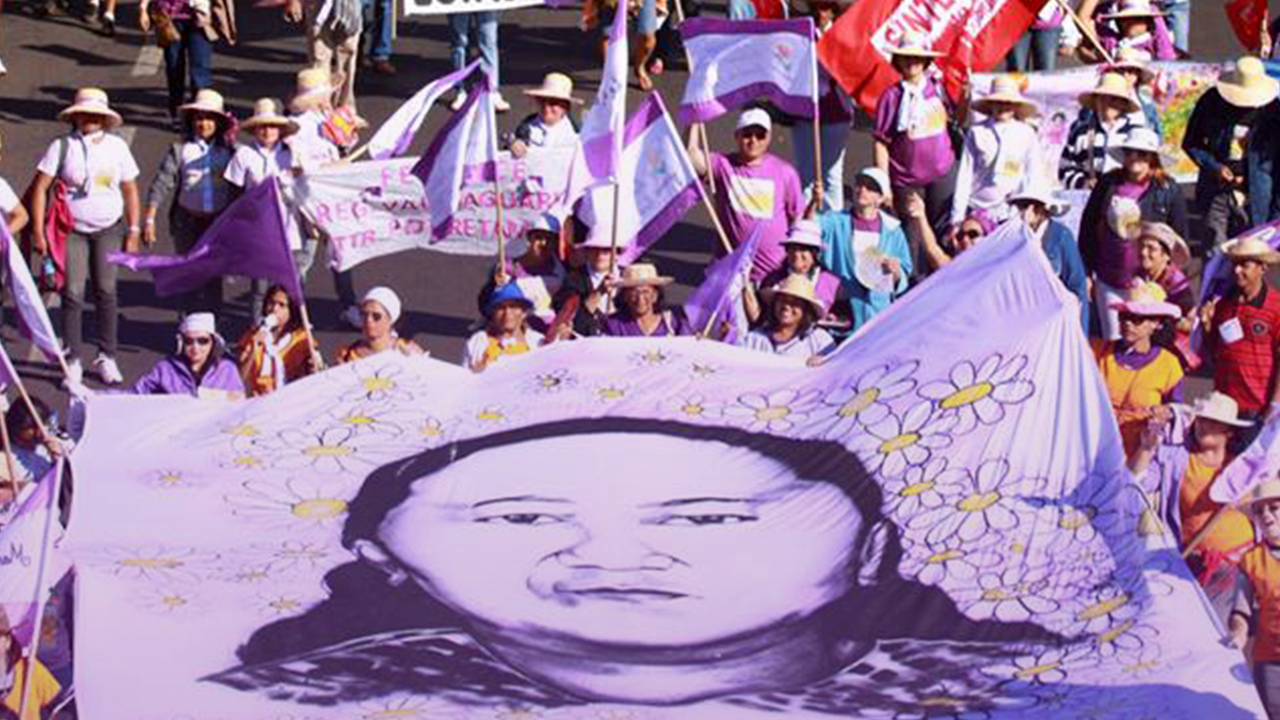 The union leader Margarida Maria Alves lived and died in the city of Alagoa Grande, Paraíba, Brazil. She was one of the first women to hold a position as a union director in the country, and a defender of human rights and rural workers’ rights as long as she lived. In the 12 years she was the head of the Rural Workers’ Union in her town, between 1971 and 1983 under Brazil’s military dictatorship, Margarida was responsible for taking labor claims to court, including for the right to formal employment and documents for farmers, demanding thirteenth salary (end-of-year bonus), 40-hour work week, and paid vacation. As Margarida exposed the abuse and disregard for workers’ rights in sugar plants, she upset many local big farmers. Threats became common and resulted in her murder on August 12th, 1983.

A Life Dedicated to the Struggle

When Margarida was 22 years old, she and her family were forced out of their land in the rural district of Alagoa Grande. Her forced displacement to the benefit of big landowners sparked, from an early age, her attention to land issues and the insecurity her farmer neighbors experienced. At the union, her first position was as treasurer. In 1973, at age 40, Margarida was elected president, a milestone for union organizing across the country, which was male-dominated. She was re-elected again and again for terms starting in 1976, 1979, and 1982. You can watch Margarida speaking about the vote that elected her on this video, subtitled by Capire in Portuguese, English, French, and Spanish.

In addition to the mobilization for the professionalization of rural workers, Margarida also fought for them to be able to farm their own land, defending family farming and agrarian reform. She struggled for the end of child labor in rural environments and for access to education for every child and young person.

Margarida believed that education was an important leverage for social change, so she established, based on the education model proposed by Paulo Freire, the Rural Workers’ Center for Education and Culture, to combat the high illiteracy levels in rural areas and provide professional qualification for local residents. The center’s model was adopted by unions across the country, fostering rural and urban development for family farmers to this day. One of Margarida’s most famous quotes is written on the front of her home, which became a museum in 2001:

In Alagoa Grande, Margarida was responsible for filing more than 100 employment claims in labor courts against big landowners. The main target of these claims was Usina Tanques, then the biggest sugar refinery in the state of Paraíba. After decades of struggle, the plant has now been declared an area of social interest for the purpose of agrarian reform, and it became a settlement—a very symbolic win for local militants.

Margarida was murdered on the street, outside her home, where her son and husband were. It was a politically-motivated crime, in retaliation for the power of her struggle, as it happened with so many other rural and urban militants who were killed or disappeared during the military dictatorship—and so many who still do today. Another part of the video published here shows Margarida saying that she would continue to fight, regardless of threats, and she would speak up until she the day she died. While the crime against Margarida has been denounced to the Inter-American Commission on Human Rights as well, it has never been solved. Her murderers were never convicted for killing her.

We Are All Margarida

Every year on August 12th rural workers’ unions in several cities across Brazil remember Margarida’s struggle to keep her legacy alive, turning this day of sorrow into the Day of Struggle Against Violence in Rural Areas and for Agrarian Reform.

In 2022, August 12th is also the day of the launch of the 7th edition of the Margaridas’ March (Marcha das Margaridas), organized by the National Confederation of Agricultural Workers (Confederação Nacional dos Trabalhadores na Agricultura—CONTAG) and several union organizations and women’s movements in the country. The Marcha das Margaridas takes place since the year 2000, always in the week of the murder of Margarida Maria Alves. The mobilization started the same year as the World March of Women, and it is a fundamental agenda for grassroots feminist organizing in Brazil. For this reason, in the past two decades it has become Latin America’s biggest mobilization of rural and working women. Dozens of thousands of women from rural areas, the waters, and forests take to the streets in Brasília every four years, showing their great diversity and their struggles for public policies, agroecology, food sovereignty, democracy, and agrarian reform.

Mazé Morais, CONTAG’s Women’s Secretary and a World March of Women militant, says that the Marcha das Margaridas has a “very strong character of denouncing, exerting pressure, and resisting, while also proposing, saying what model of society the Margaridas and women champion.” The Marcha das Margaridas is powerful on movements’ political agenda because it is a space for presenting demands and resistance, but also achievements. “The achievements we have had are beneficial not only for women. The working class as a whole benefits from the wins we’ve had over the course of these struggles, such as the campaign for documents for rural workers, technical assistance for women, and joint land titling. The women who go to Brasília know the meaning of the Marcha das Margaridas in their lives and the impact of this march on the lives of the working class, especially on women’s lives.”