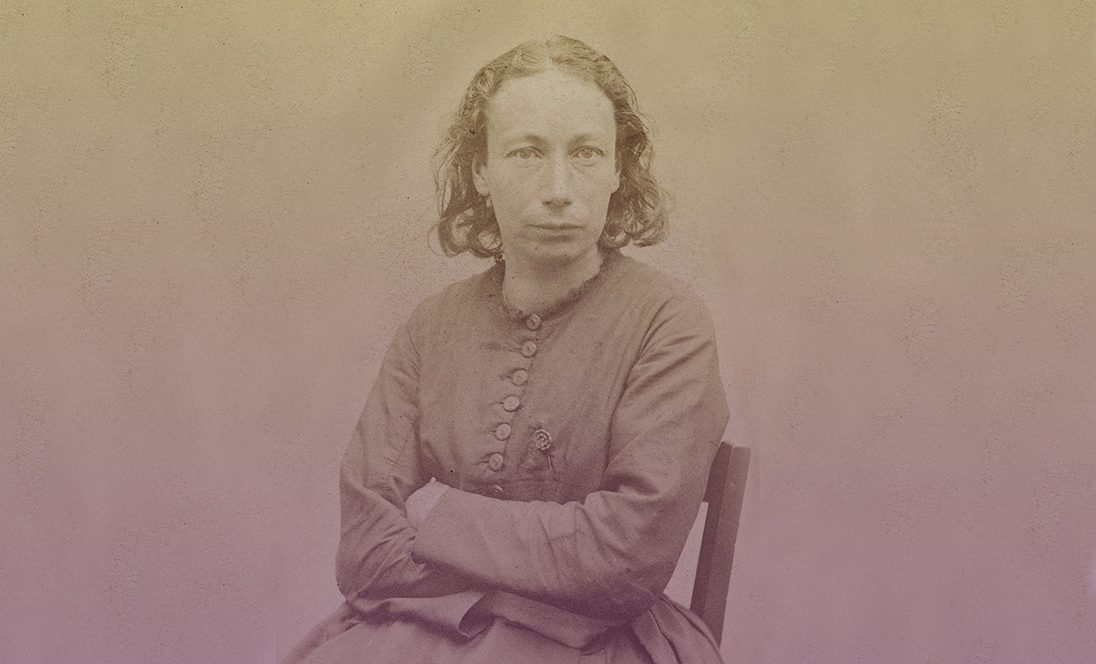 Louise Michel and the Women of the Paris Commune

On May 29th, we celebrate Louise Michel’s 191st birthday.

Translated from portuguese by Aline Scátola.

Louise Michel was a rebel, an internationalist, feminist, and anarchist woman who was known for her participation in the Paris Commune. Born on May 29th, 1830, she lived a life dedicated to the revolution: she was a teacher, a writer, a poet, and most of all, a libertarian militant.

“Barbarian that I am, I love cannon, the smell of powder, machine-gun bullets in the air. It was beautiful, that’s all,” she wrote in her Memoirs [Mémoires], published in 1886.

Between March 18th and May 28th, 1871, the Paris Commune exposed the revolutionary possibilities of the working class. For this brief moment, more than simply seizing power and managing an established state, the decrees of the Paris Commune changed the state apparatus. For example, they promoted the separation of church and state, and in the process of marking the socialist orientation of the Commune, they established the possibility of creating co-operatives to self-organize labor and production at abandoned factories.

During the Commune, Louise Michel contributed to organizing early childhood education efforts, mobilizing and organizing women, and bringing women in prostitution to work in field hospitals. Women who were organized in local associations created labor co-operatives and took part in all Commune fronts. Louise Michel was a member of the Vigilance Committees and discussed, shoulder to shoulder with men, the strategies and progress of the Commune.

Louise Michel was arrested many times. And every time, she took on the responsibility for and autonomy over her actions and challenged the men who tried her. After the Paris Commune, she was deported to New Caledonia, a territory colonized by France, where she joined the struggle of the Kanakas against the expropriation of their lands by the colonial powers. “That same hope for liberty and bread was in the hearts of the Kanakas.” It was around this time that she met and joined the anticolonial struggle of the Algerian people. When she returned to France and until her late years (1905), she fought for internationalist movement-building for the revolution. “We felt like we were living more fully, with a feeling of being close to our own element, amid an intense struggle for liberty.”

To acknowlede the history of the Paris Commune through the actions and records of Louise Michel, a member of the Commune, is to acknowledge the active participation of thousands of women who were organized and “covered the cannon with their bodies.” With this political sense in mind, we translated excerpts from her book “The Commune”[La Commune], first published in French in 1898.

Among the most resolute fighters who struggled against the invasion and defended the Republic as the dawning of liberty, many are women.

They wanted to make a caste of women, and under the force that crushes them through events, the selection was made; we were not consulted for this, and we do not have to consult anyone. The new world will unite us with a free humanity in which each being will have their place.

All societies of women, thinking about nothing but the terrible moment we were experiencing, came together with society to help the victims of the war. Bourgeois women, the wives of members of the National Defense who little contributed to the struggle, were heroic.

I say this with no sectarian spirit, as I participated more often in the vigilance committee than in the war victims’ relief committee, but the spirit was generous and broad; relief was provided, spread even, in order to alleviate some of the anguish, and also to encourage people not to surrender.

If someone spoke of surrender in front of the relief committee, they would be thrown out as energetically as if it were in the clubs of Belleville or Montmartre. We were women of Paris, as we are in the suburbs, as I remember in the Society for Elementary Education[2], where, on the right of the desk, in a small cabinet, I had room for myself in the skeleton box; in the relief group, my place was on a stool at the feet of Mrs. Goodchaux, who resembled an ancient marquise under her white hair, sometimes smiling while pouring a small drop of cold water over my dreams.

Why was I a privileged woman? I am not sure. I am sure that, perhaps, women like uprisings. We are not worth more than men, but power has not yet corrupt us.

And the fact is that they liked me and I liked them. When, after October 31st, I was taken prisoner by Mr. Cresson, not for taking part in a demonstration, but for saying, “I was there only to share the dangers of women, not acknowledging the government!” Mrs. Meurice, in the name of the society for victims of war, came to demand my release, as did Ferré, Avronsart, and Christ representing the clubs.

So many were the things women tried in 1871[3]! All of them, and everywhere! At first, we established field hospitals at the forts. Because we had, contrary to usual custom, found the National Defense willing to welcome us, we were starting to believe that rulers were disposed to combat, when they also deployed to the forts a huge number of absolutely useless, ignorant, small-minded youth, who shouted their fears out loud while the brave were trying to survive. All the women rushed to quit, to try to find more purposeful work. I met, last year, one of these brave rescuers, Mrs. Gaspard.

The revolutionary meal with which, during the entire siege, Mrs. Lemel, of the bookbinding union chamber, prevented, I don’t know how, so many people from starving to death, was a true feat of devotion and intelligence.

One day, it was decided that Montmartre did not have enough field hospitals. So, along with a friend from the Society for Elementary Education, who was very young at the time, we decided to establish one. It was Jeanne A., later Mrs. B. We didn’t have a penny, but we had an idea of how to raise funds.

We took with us a member of the national guard, who was tall and had the countenance of a ‘93 engraving, marching in front of us with the bayonet on his rifle. The three of us, with big red belts, carrying bags especially made for the occasion, set out to the homes of the wealth with a somber look on our faces. — We started off with the churches, the guard walking across the aisle and hitting the pilasters with his rifle; meanwhile, each of us took to one side of the nave, asking for help, starting  with the priests on the altar.

Then we moved on to churchgoers, who, pale with fear, dropped their coins in our bags—some made donations willingly, all priests contributed; then it was time for some Jewish or Christian patrons, then the good people; a pharmacist from Butte offered the materials. The field hospital was established. At the Montmartre town hall, they laughed a lot about this expedition, which no one would have encouraged us to make had we told them about our plan before we succeeded in it.

The day Messrs. Poirier, Blin, and Excoffons came to meet me in my classroom to start the women’s vigilance committee is engraved in my memory.

It was evening, after class, they were sitting by the wall, Excoffons with her dishevelled blond hair; Mrs. Blin, an old lady, wearing a red knitted capeline; Mrs. Poirier wearing a red hood. No greetings, no hesitation, they simply told me, “You must come with us,” and I replied, “I will.”

[…] People often talk about jealousy among teachers, but I have never experienced that; before the war, I would exchange classes with my neighbor, Ms. Potin, who taught drawing at my house, and I taught music at hers. Sometimes we would bring one of our older students to class at Hautefeuille street. During the siege, she replaced me while I was in prison.

The Army of the Commune—The Women of 1871

Like dreamlike forms passed the battalions of the Commune, proud with their free air of uprising, the avengers of Flourens; the Zouaves of the Commune, the federate scouts similar to the Spanish guerrilla fighters, ready for daring enterprises. The lost children, who, with so much enthusiasm, jumped from trench to trench and moved forward. The Turks of the Commune, the lascars of Montmartre with Gensoule and others.

All these brave, gentle people, who Versailles referred to as bandits, had their ashes scattered to the four winds, their bones corroded by quicklime. They are the Commune, they are the spectrum of May!

Those from the rope mill and the schools: Lemel, Dmitrieff, Leloup. Those who organized instructions while waiting for the struggle in Paris, where they were heroic: Messrs. Andrée Léo, Jaclar, Périer, Reclus, Sapia. They all can be counted as part of the army of the Commune and they too are, themselves, legions.

[1] “Les femmes de 70” in the original text. We chose not to abbreviate the decade in this issue to avoid confusion for 21st century readers.

[2] Largest and oldest secular primary education association, established on June 17th, 1815, that is, on the eve of the Battle of Waterloo.

[3] Year as is in the original, even though this excerpt is about the year 1870, prior to the Paris Commune.

Food sovereignty: the trajectory of the World March of Women

Over these 25 years of the principle of food sovereignty, women have contributed to biodiversity and reorganization of labor.

History and Analysis of the Feminist Movement in Morocco

Read an excerpt from the article “Feminist Movement in Morocco,” by Khadija Ryadi