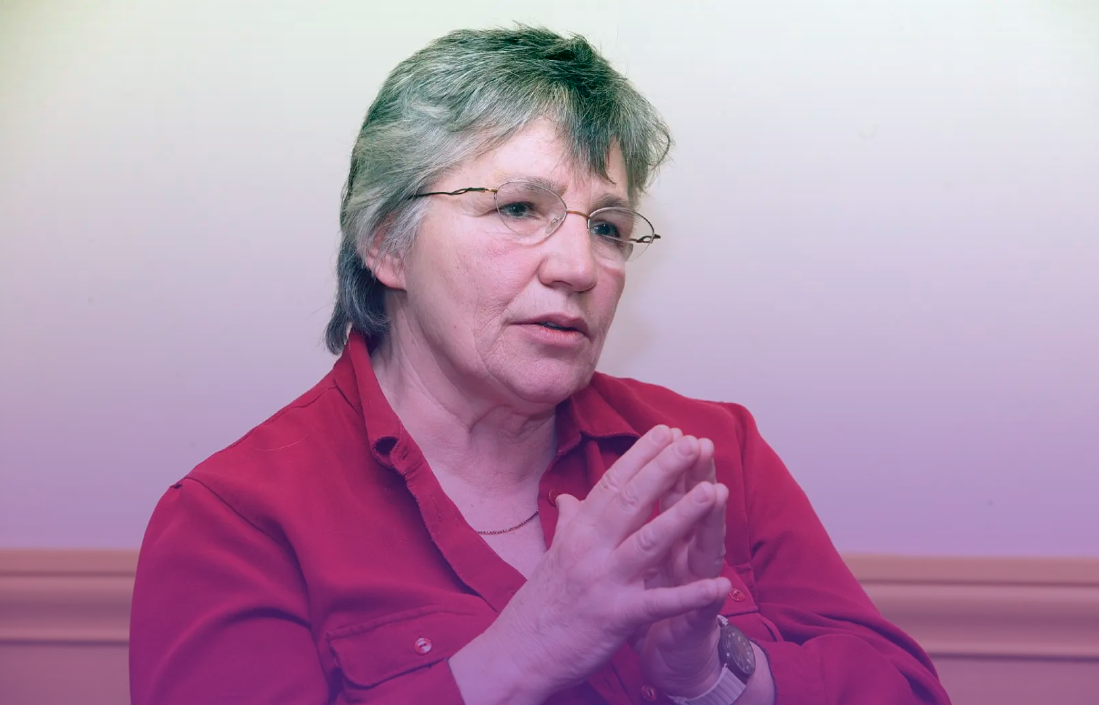 Lorraine Guay, Our Sister in Struggle

"Not alone, never alone, always together": activists pay tribute to one of the founders of the World March of Women

On June 17, we were devastated to learn of the death of our dear friend and sister in struggle, Lorraine Guay. We want to share our deep sorrow, and above all our immense admiration, for the woman who inspired countless activists over the last half century. This truly remarkable woman was little known to the general public. We hope to rectify this by openly paying our deep respects. Lorraine comes from a deep-rooted tradition of Quebec activists, women and feminists who are relentlessly working to change our world, one step at a time.

Born in Verdun in 1943, Lorraine was always proud of the modest background she grew up in. She became involved in causes of social justice at an early age. Beginning with local and international YCS,  Montreal’s Pointe-Saint-Charles Community Clinic and the Regroupement des ressources alternatives en santé mentale (The Coalition of alternative resources in mental health in Quebec), Lorraine went to  El Salvador as a nurse in guerrilla-controlled zones, then to Nicaragua and Chile. She was very skilled at working for change at various levels of governance. Back in Quebec, she was at the heart of the 1995 Bread and Roses march where she led a contingent of marchers and she brought her brilliant strategist tactics and popular educational knowledge to the 2000 World March of Women. From the New Democracy Movement to coalitions in support of Palestinians, Lorraine’s work never ceased to amaze us.

How can we do justice to the breadth and depth of Lorraine’s life in this short text? She was a feminist, an independentist, an anti-capitalist, an internationalist, an anti-militarist, a decolonialist… None of these qualifiers alone describes her adequately. But to all these movements she brought her humanity, warmth, presence, lucidity, profound analysis, quest for solidarity and the firm determination to promote the active participation of those directly affected by social, political and economic injustice.

Lorraine’s actions were rooted in her reality of being a woman, of firmly believing that the advancement of women towards freedom must be collective and global. She began to identify herself as a feminist when she saw it as a bridge between various social struggles, defending the rights of all women in the world.

A formidable intellectual as well as a grassroots activist, she put her words and her pen at the service of collective action. We cannot name here all of the causes with which she was involved. Not alone, never alone, Lorraine rallied people as she focused on injustices, uniting in her desire to resist and fight back. The number of groups and individuals she has rallied through her well argumented advocacy documents are incalculable. As are the causes she contributed to and the numerous new ideas she shared, often alongside young women whom she listened to as much as she inspired.

How can we not be impressed by this woman of multiple talents and qualities? Her simplicity, her unfailing integrity, her unwavering respect for others and her incredible tenacity must be stressed. We must also mention her brilliant joie de vivre, the pleasure she took in sharing wine and good food, and her love of poetry. Her physical energy too, she who slept little and who, at 75 years of age, still went to meetings on bike.

Convinced that it is by questioning that we move forward, she made doubt her intellectual friend. She had the acuity to resist the certainties that easily confine our thoughts. She opened to others, welcoming the changes in the world that confronted her positions. She refused to adhere to any ideology or political party, wanting to keep intellectual space to move forward in the direction she believed she must take. Driven by indignation, she was a “wise radical”.

Lorraine was an independentist to the end, co-editing the book Un Québec pays. Le OUI des femmes (2018). An unwavering ally of indigenous nations and peoples, she fought to end all forms of discrimination and was not afraid to call out systemic racism.

Through the practice of debate, she looked for ways forward, for desirable consensus, for the possibility of common action. A democrat to the core, she campaigned for a proportional voting system, but also for women to obtain their rightful place and recognition in politics. Beyond representative democracy, she sought and experimented with participatory democracy strategies. In community circles, she was recognized for her remarkable ability to bring ideas and projects to the table, to explain and to mobilize.

In a book co-written with Pascale Dufour, Qui sommes nous pour être découragées? (2019), Lorraine discloses with disarming frankness her doubts, uncertainties, struggles, and her hopes. She would often remind us, Who are we to be discouraged? and she shared the same absolute conviction as the great Madeleine Parent, a trade unionist and feminist who died in 2012 that we have no right to give up, no matter what period we are living in.

She liked to quote F.S. Fitzgerald: “One should be able to see that things are hopeless and yet be determined to change them anyway”. The hope she instilled makes her precious to us, because sometimes, in the face of history’s setbacks, we lack breath.

Her legacy reminds us to persevere when things go wrong, to connect and move forward in spite of war, to act in the face of the relentless refusals of economic and political leaders to address climate change, to speak up and denounce the violation of rights, in spite of the rise of inequality and intolerance, to persevere for the day when we can move forward again.

This is what Lorraine Guay’s life and actions teach us. This is what softens our pain and accompanies us as we continue our work in the struggle.