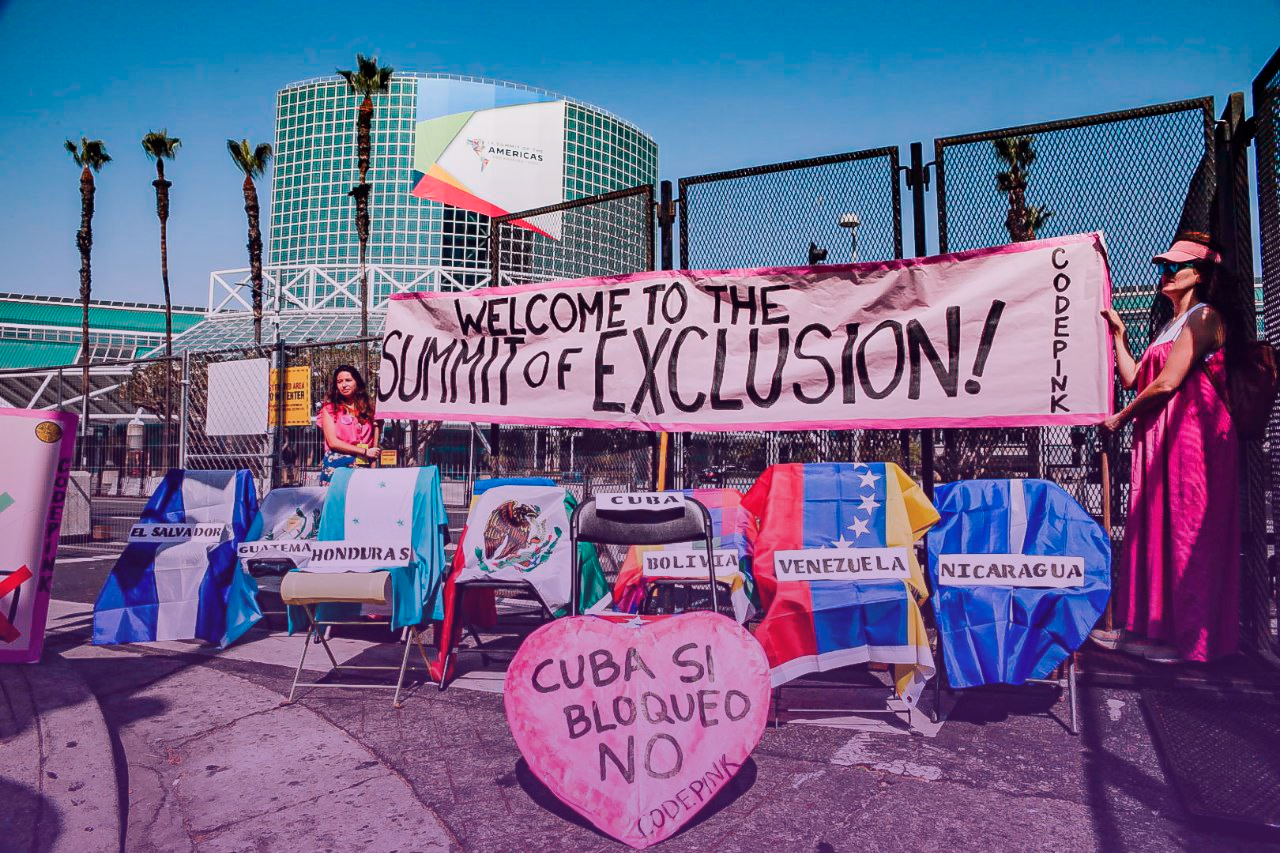 The Summit of the Americas took place between June 6th and 10th, 2022 as a failed attempt by imperialism to rebuild its neoliberal agenda. The president of the United States, Joe Biden, the host of the Summit held in Los Angeles, did not invite the leaders of Cuba, Nicaragua, and Venezuela to the event, because these are states that do not yield to the US foreign policy. As a response to having these countries excluded from the summit, the leaders of Mexico, Honduras, Bolivia, and Guatemala refused to join it.

The Summit of the Americas has been, over the course of the years, a space to boost the interests of big corporations and the financial market. Countering it, during some meetings, grassroots movements from the continent have organized the People’s Summit, self-managed militant spaces of resistance, denunciation, strengthening, and promotion of social, environmental, and economic alternatives pledged and practiced by the peoples. This happened in 2005, when a continental grassroots mobilization met massively on the streets of Mar del Plata, and the proposed FTAA agreement was defeated at the Summit of the Americas.

In 2022, as this year there are even fewer dissonant voices against the neoliberal project, social movements from the US and other countries in the Americas have organized a diverse, situated, and mobilized People’s Summit. Militants from several parts of the continent gathered at the Los Angeles Trade Technical College and built an intense program of panels, workshops, demonstrations, and sectoral and cultural exchange, integrating union, feminist, Black, Indigenous, LGBTQIA+, environmental, peasant, community, and anti-imperialist struggles.

Against interventionism, war, blockades, imprisonments, debt, privatizations, displacement, and violence, the grassroots movements who took part in the People’s Summit showed the pathways toward democracy, internationalism, solidarity, and sovereignty.

The opening session of the People’s Summit, called “Democracy for Whom: The Consequences of US Interventions in the Americas,” brought together the voices of women from four countries in the Americas: Costa Rica, Cuba, United States, and Mexico. Drawing from their realities, which are marked by US imperialism and violence, the guests denounced the neoliberal mechanisms that hinder real democracy.

The panel started denouncing the Organization of American States (OAS), which helps to organize US actions and interventions in Latin America and the Caribbean—this is why Fidel Castro called it the “Ministry of Colonies of the United States.” “In the name of a so-called democracy, the OAS carries out the work of the CIA in overthrowing governments that dare to contradict the interests of the United States. It means interfering in mass, popular, people’s movements, of working class people, of the peasantry. It means orchestrating coups against democratic elected leaders, and pushing forward sanctions that strangle the livelihood of everyday people. What kind of democracy is that?”, wonders Sheila Xiao, the moderator at the opening session.

More than denouncing the US intervention against people’s sovereignty, the People’s Summit is a space for organizing and struggle. “As brutal as the OAS is, it only makes the people want to fight harder,” Sheila said. Alina Duarte, a Mexican journalist with Telesur, also affirmed this willingness to fight: “it is not the time for organizations like the Summit of the Americas. It is the time of the People’s Summit, the time of the peoples and communities. It is the time of Indigenous peoples and the working class, of feminists, of militants who are committed to their communities.”

The Border Crossed Us

The panelists underscored how key the issue of borders is. While migrants from Latin American and Caribbean countries to the US are criminalized, they are also useful for hyper-exploitation, working precarious jobs with no rights. “We never crossed the border—the border crossed us,” Alina said adamantly. “The US is a state that has been built on genocide against its Indigenous peoples, on slavery, and the migrant power that they criminalize today—whom, at the height of the pandemic, they called ‘essential workers,’ but then criminalize, persecute, and deport. That’s the American dream: a beautiful Hollywood script, but, in reality, it is a nightmare for millions in and outside the United States.”

Fidelina Mena Corrales, a militant from Costa Rica who struggles for the rights of migrant workers and refugees, also criticized the “American dream” and addressed the topic of migration between Latin American and Caribbean countries. While these countries do not have the same military apparatus as the US, they have border police, which produce violence and violation of rights. She argued that these are matters that can only be resolved through structural changes in policies and society. “Our governments attack us. They don’t attack the real structural issues. They are only interested in making laws and have democracy for few people, a democracy for the economy.”

Xochitl Sanchez, of the Central American Resource Center in Los Angeles (CARECEN-LA), said that border militarization is directly connected to a war culture. She argued that while the conflict between Russia and Ukraine is a reminder of the Cold War and the imminent danger of a global conflict, in Central America there is also a “hot” war, an armed and militarized border control and the genocide of traditional populations. It is an intense, daily, and racist attack that is not televised.

These violent actions lead to increasing migration and open the way for big transnational corporations to occupy territories, forcing people out of their homes, and destroying communities. “It was intentional to allow corporations to take and occupy these lands for the sake of making money out of what they know to be a very wealthy region. Central America is absolutely beautiful and has so many resources that would be able to allow for the people who live there to live their lives in dignity and in wealth,” Xochitl said, adding that the pandemic was an opportunity to further militarize US borders.

This false neoliberal democracy for the few also imprisons, blocks, and sanctions whoever may represent a risk to their interests. This is why Cristina Escobar, a guest from the Union of Journalists of Cuba, had her visa denied and was unable to attend the Summit.

Cristina sent a video so that her contribution to the discussion would not be missing, sharing how imperialism and sanctions against her country have affected her life and the lives of so many other people. She also talked about her struggle for Cuba’s freedom since she was a teenager. “My life have been marked by austerity and resilience as that as the majority of Cubans, because of the many obstacles the U.S. sanctions have imposed. This country is under the most comprehensive and extensive system of sanctions ever imposed by the most powerful country of the world,” she shared, adding that there should be studies on the resistance of the Cuban people, given how exceptional it is.

Gail Walker, the executive director of the organization Pastors for Peace, posed the question of what the peoples mean when they talk about democracy. To answer it, she recalled Martí’s idea of Nuestra América, that is, a diverse America belonging to its peoples. She said this idea can destroy the US efforts to render diversity invisible and homogeneous.

As a Latin American and Caribbean people, which is also part of the Americas, even though some countries do not speak Spanish, we are present and aware that we want to constitute one people.

Despite a history of oppressions, Gail Walker says we are living a turning point and a moment of hope: “the many oppressed in this part of the world are awakening to the courageousness and rebelliousness that is in our ancestors’ DNA.” She also said Cuba’s example shows the real pathway toward democracy based on collective values. “In the midst of the pandemic, this tiny but mighty nation developed vaccines to fight Covid and made them available to the global south. Cuba is an example of selflessness, representing a threat to what the US at its core represents.”

For all that, repositioning the idea of democracy and radicalizing it is necessary, including the pressing matter of people’s participation, sovereignty, self-determination, and integration. A democracy conducted by and for the people, and not by and for the market. As Alina Duarte argued, “I prefer talking about people power than about certain democracies that are mistaken by casting ballots every few years. This people power is being created in several parts of Latin America.”