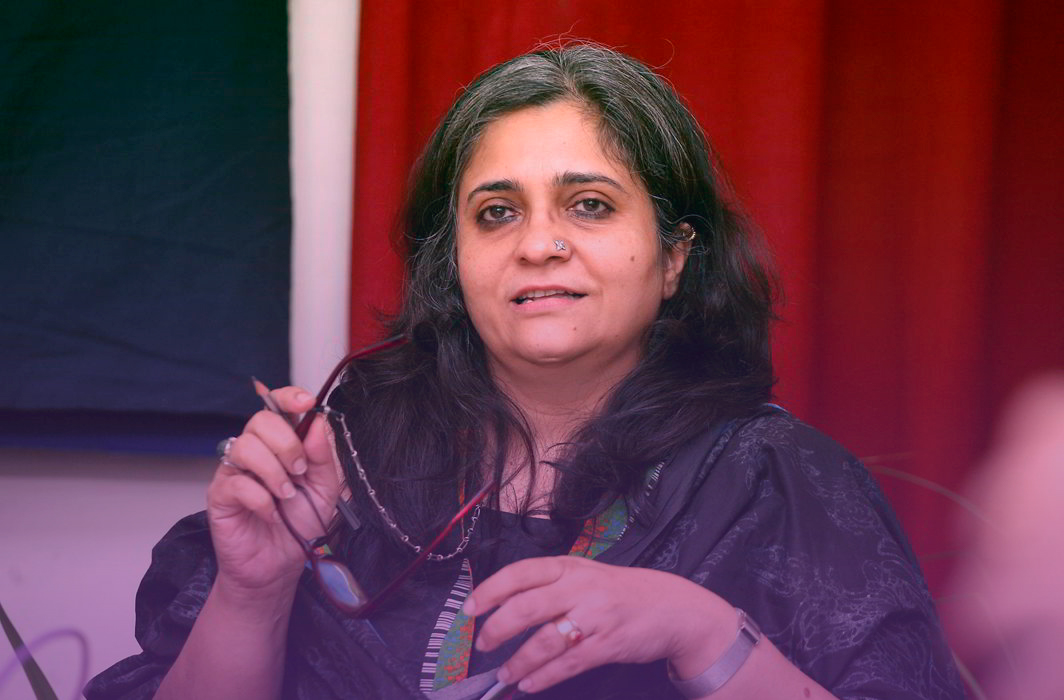 In solidarity with the campaign to free Teesta Setalvad, we share an excerpt from her memoirs in which she writes about journalism committed to human rights

Indian journalist and activist Teesta Setalvad was arrested on June 25, 2022 late into the night at her home in Mumbai. Her arrest was made on the basis of a first-information-report (FIR) that alleges that she urged on witnesses and fabricated materials produced on the anti-Muslim pogrom that took place in Gujarat in 2002. Teesta Setalvad is being held alongside two former government officials who worked with her to collect and disseminate information on the pogroms: RB Sreekumar and Sanjiv Bhatt. The FIR was framed after the Indian Supreme Court called upon Teesta Setalvad to be investigated for her role in trying to fight for justice for the survivors and the victims of the violence.

A human rights defender sits in a prison cell in Ahmedabad, India, while those who authored the violence are in positions of power.

Setalvad is secretary of Citizens for Justice and Peace, an organization that she formed to help advocate for the victims and survivors of the 2002 Gujarat pogrom. The respected lawyer Indira Jaising wrote in 2015, ‘The case against Teesta smacks of a plan to deter her from assisting victims of the Gujarat 2002 riots. The financial dealings of Teesta and CJP can be probed, but the disproportionality of the legal process, the timing, and the insistence of the prosecution on custodial interrogation, smack of vendetta’.

The persecution of Setalvad is not singular. She is only one of many writers and activists who are sitting in prison in India only because they want to investigate the illegalities conducted by the forces close to the ruling party in India.

On this Monday, August 22nd, 2022, the Supreme Court of India will receive a bail request for Teesta Setalvad. Standing in solidarity with Setalvad and supporting all those who struggle for justice in India and around the world, Capire shares a fragment of her memoirs, Foot Soldier of the Constitution, published in 2017 by LeftWord Books. In this excerpt, she writes about her experience covering the 2002 Gujarat conflicts, exposing the grief of witnessing religious and patriarchal violence while also showing the power of doing militant journalism in defense of justice and people’s lives.

The phone did not stop ringing that Wednesday. From about 9 a.m. on 27 February 2002 till months afterwards, the ringing was relentless and ceaseless. Gujarat has twenty-five districts. I had travelled across many of these before 2002 and many of the reports and exposes in Communalism Combat and elsewhere had resulted in some administrative action for the victims and survivors of previous communal events. Perhaps it was because of this history and the trust that built up as a consequence that the people across Gujarat connected with me immediately when things fell apart so tragically in 2002.

This was the day of the Godhra incident.

On 4 March, I was at a relief camp – the Shah Alam Camp – in Ahmedabad. I remember meeting women from Naroda Patiya there. They described how they had reached the Dargah. They came with no clothes on when they were rescued, a humiliation easy to recount but difficult to comprehend. This meant that they had been stripped off clothes and dignity, apart from being physically abused for the better part of twelve to thirteen hours. They sat in that state at the police station. They had been brought back bloodied, bruised and naked to the camp.

The holy war of the RSS-VHP-BJP had been unleashed at the Gangotri and Gomti housing societies. These residential barracks carried the names of Mai Ganga, the holy river of Sanatani Hindus. They were not spared. On 28 February, the attackers unleashed their violence on the daily wage earning women and their daughters and mothers. Women and men from the entire neighbourhood watched the ‘spectacle’ of iron rods and worse being used to sever young, innocent Muslim girls and women. A chillingly cruel, militarized and dastardly face of Hindu dharma was being manifested; a thousand times worse than what I had witnessed on Bombay’s streets in 1992-93. With each such multiplication of organized horror, humiliation and crime, the shape of the Hindu Rashtra was being drawn with more and more sharpness.

I had my spiral diary with an orange cover and a tape recorder with me. Never one to fully trust the technology demon, I have always relied on my copious notes and collaborative memory. I remember meeting this shopkeeper who had seen his wife raped. She was one of those rare survivors of the gendered violence. Most of the others were killed after being brutalized. He remained by her side even as she testified in Court. I met this woman who had seen young girls getting raped. It was horrible – the words, the accounts, the monotony of detail. What does it take for a survivor to recount the story again and again and again?

We met in groups. Many of the survivors by now had become very close to me. I met the Gulberg survivors in Dariyakan Ghumbat camp. Ironically the man who was running this camp was always seen by survivors as a BJP-supporting Muslim, yet he still ran the camp very well.

It is chilling that for seven to eight hours a whole locality was actually enjoying a massacre. When you have women and men celebrating the persistent hounding and killing, including the daylight rapes of the young girls and women, it is reflective of the public space before and after the macabre violence.Such violence also qualitatively affects the space in that area. For Rupabehn Mody and Sairabehn, the loss of a loved son each was and is as bruising as the fact that their precious society – ‘Gulberg’ – had, for several hours on 28 February been host to bloodletting and daylight rapes. It is too painful even to speak or write about. At Naroda Patiya, one hundred and twenty-six people were killed on 28 February, although the official charge sheet says ninety-six. A well in a nearby field became their grave for months.

The sheer viciousness of the attacks – at least in Ahmedabad – had even paralysed activist friends within the city. In Vadodara a dogged citizen’s effort with Trupti Shah and Rohit Prajapati held the fort, but they were unable to visit the outlying districts. Several times each day we would speak and exchange notes. The extent of culpability and partisanship revealed by the mainstream Gujarati media has been documented in the Editor’s Guild Report of 2002 (Rights and Wrongs). Jansatta, Kutch Mitra and Gujarat Today, a Muslim-owned Gujarati paper, did the only responsible reporting in the vernacular. Sandesh and Gujarat Samachar beat the government’s drum with the worst form of propaganda. It was quite frightening in the way perceptions had been built up about what had happened in Godhra, since seventy per cent of Gujaratis got their news from these partisan publications.

Dozens of young men and women would come to me in the camps – embittered and angry. I thought: how do we redeem their faith in the country, in the people, in their neighbourhoods? I gave a particularly bitter young man a small tape recorder and asked him to tell the story of what happened. It was from such documentation that justice would have to come.

A fortnight after the Central Bureau of Investigation (CBI), instigated by the Modi government, raided my home in 2015, I re-visited the Shah-e-Alam Dargah. I hadn’t been there for many years. The Zakia Jafri case hearings in the Gujarat High Court had concluded for the day. It was twilight. My driver – Aiyyub – recalled how he had spent weeks at the Dargah as a refugee. There was something magical that evening in 2015 – the light, the lit candles, the sparkling water within the Dargah, the vast expanse of space. I remember looking around and taking it all in, with a deep, deep breath. It seemed so vast then. In 2002, with twelve thousand five hundred people crammed together, the Dargah had shrunk. It had been crowded and stifling, with the cries of women and children and a bare-boned silence from the men. There was nothing magical then. The memory of that time interrupted my reverie.