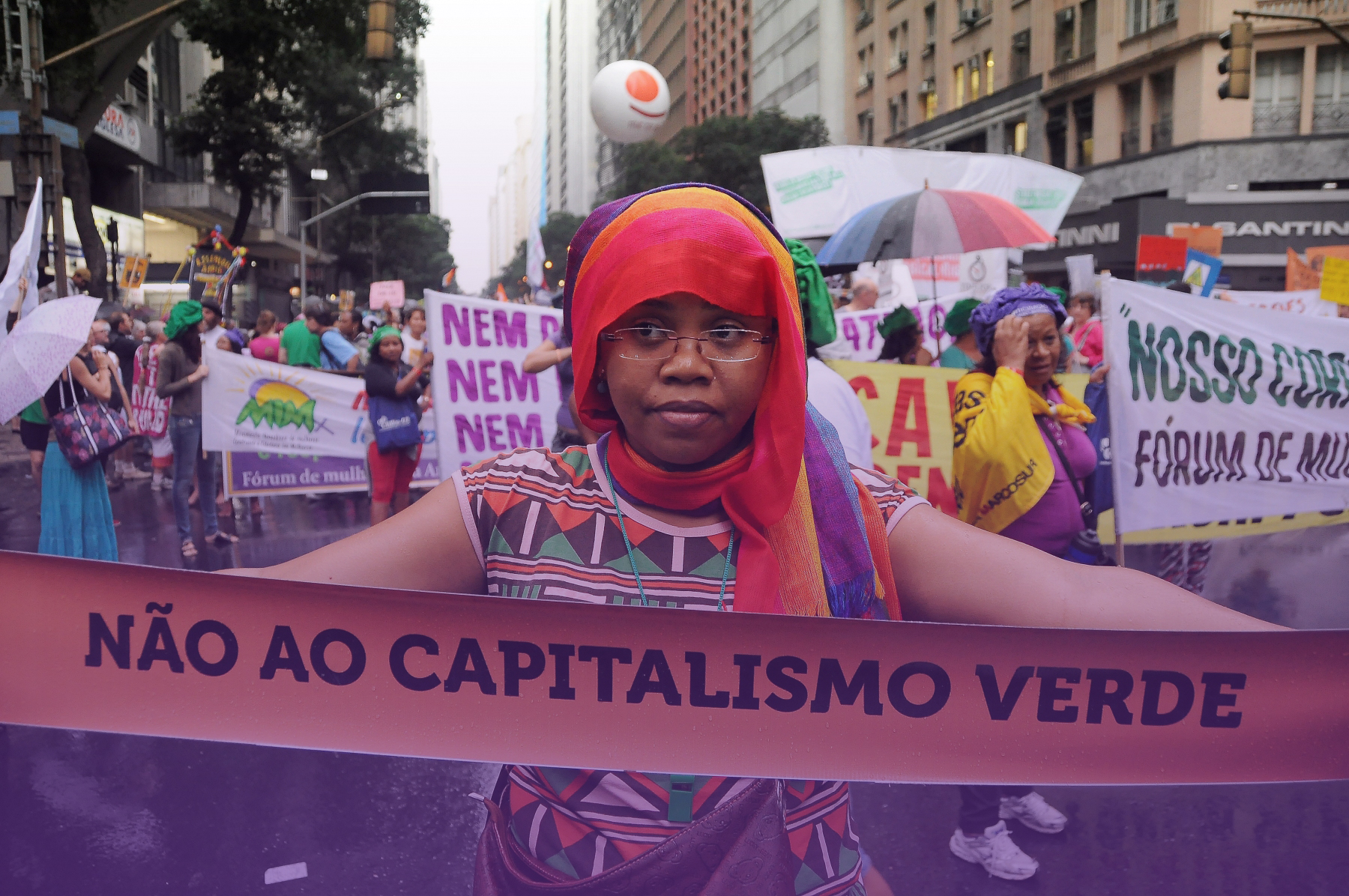 For a Popular Peasant Feminism: The Journey of CLOC-La Via Campesina

Before feminism emerged—as a social, political, and cultural movement in the 19th century—, women already organized different forms of resistance in face of the ruling impositions of class societies, and many have been the processes that challenged these social systems. Feminism emerges from this historical legacy, and many feminist movements were established as women’s struggles moved forward for emancipation, in connection with different theoretical and political currents.

From the perspective of women workers’ feminism and, therefore, of the struggle for human emancipation, we are building popular peasant feminism—which has an identity and is revolutionary. Its bases are grounded in an analysis of the rural reality at a global level, which pinpoints common elements everywhere we work as CLOC-La Via Campesina: the appropriation of and speculation with natural goods by transnational corporations; the standardization of agricultural and mineral commodities as the hegemonic model in rural areas; and the strong state apparatus that supports capital with public funds, debt cancellations, and a broad legal/institutional framework. These issues hinder concrete achievements in terms of democratizing the access to land; agrarian reform; the demarcation of Indigenous territories; the acknowledgment of peasant and Quilombola territories and a public policy platform dedicated to strengthening small farming; and the defense of the peoples from rural, water, and forest communities.

Peasant women have been developing a process of resistance and struggles to tackle this model. The biggest manifestation of that happens during the March 8 demonstrations for International Women’s Day, such as the mobilization spearheaded by CLOC-La Via Campesina Brazil women in 2006—a historic milestone with the symbolic destruction of eucalyptus seedlings in the plant nurseries of the pulp and paper company Aracruz Celulose.

According to the Food and Agriculture Organization of the United Nations (FAO), rural women are responsible for more than 45 percent of food production in Brazil and for up to 80 percent in other countries in Latin America and the Caribbean. Their empowerment not only promotes more social justice, but it can also ensure the planet’s food security and increase agricultural production by 30 percent. However, while it is clear how women play a major role in agriculture and food, women and children are the biggest victims of hunger, and only 20 percent of them grow on their own land.

To think about agroecology and feminism is to think about revolutionary traditions, renewals, dialogues, and praxis. Agroecology is part of peasant women’s livelihoods—it is that agriculture from their ancestors, Indigenous peoples, which means it is agriculture before the establishment of the private property. It was an agriculture that emerged from local needs, which observed and was inspired by the paces and ways of nature; an agriculture that was likely discovered by women and carried out by men and women. While peasant women know “agroecology” is a recent word, they can see and understand that their origins date back to ancient times.

In the recent history of agroecology built as science, movement, and practice, it emerges by directly challenging the model that devastates natural and social life, one that has been promoted by the Green Revolution. Women are the first to understand how important this proposed new way of organizing life in the countryside is, because this was the model that was grounded in their own peasant, Indigenous, and Black experience. Women saw that their ancient practices are being brought back.

Agroecology appreciates the seeds that women have guarded, while many peasants found themselves following the technical approach of technical assistance and agricultural extension, adopting the entire Green Revolution package, and giving up their sovereignty. Agroecology appreciates production based on dialogue and integration between the several subsystems of family farming or of Indigenous or Black communities, thus appreciating that production that was disregarded, yet ensured peoples’ food sovereignty and food diversity for families.

But agroecology does not escape the reality of social relations built by the capitalist, patriarchal, and racist system. This reality leads to contradictions that also manifest while building agroecology—as it grows and gains more exposure, women are once again rendered invisible in the name of family labor, which is often expressed in the appreciation of men’s work only.

In the sexual division of labor in rural areas, women carry out the work regarded by the capitalist system as productive as well as the reproductive care work, which leads to an intense, grueling work routine. For women, agroecology is also an anti-capitalist struggle. This is why, as they struggle, they aim to underscore their everyday lives and work from a feminist perspective, providing new meaning to this place, demonstrating the social value of their work and building new relationships between men and women in the productive and reproductive work that enables human life within the family and the entire rural life.

Building popular peasant feminism—from the different struggles waged by peasant, Indigenous, Black rural, and wage-earning women—means building sovereignty and autonomy in different senses. One of them is when they break free from the imprisonment of the home and the domestic space, starting their process of liberation, building their autonomy and decision-making ability, becoming a political and social actor, realizing and appreciating themselves as workers.

For peasant women, agroecology can move forward and become effective as a political proposition to resist capitalism and strengthen an undiminished way of living for peasant people only if it moves forward in acknowledging peasant women’s labor and political contribution for the building of agroecology and peasant resistance and only if it establishes, as one of its principles, the confrontation of the exploitation of labor, of all forms of inequality, oppression/domination, discrimination, as well as all forms of violence perpetrated against women and Black and Indigenous populations.

Popular peasant feminism reclaims the countryside as a place and space of life, land, territories, natural goods, the return to and appreciation of the diversity of cultures and identities of peasant people, key elements for the popular peasant feminist struggle. It also aims to give new meaning to the understanding of the peasantry, of peasant peoples, so that within their social relations, cultures and identities, within families and grassroots peasant organizations, there are no hidden patriarchal ideas and practices, no discrimination, violence, under-appreciation and belittlement of women.

Building Feminism Within CLOC-La Via Campesina

Peasant women have always been here actively taking part in processes of struggle and resistance in different contexts and moments in history. And that was also the case during the struggles to resist the implementation of the neoliberal model in the 1980s-90s in the Latin American continent. During the celebrations for the 500 years since colonizers “discoved the continent,” the Indigenous, Black, and Grassroots Resistance Campaign was created, which led to the Latin American Coordination of Peasant Organizations—CLOC-La Via Campesina [Coordinadora Latinoamericana de Organizaciones del Campo]—, to organize the resistance against imposed neoliberal policies and strengthen the defense of rights and the sovereignty of peasant peoples and the working class.

Women who take part in peasant struggles at the local, national, and continental level become aware through their everyday actions that they need to fight against invisibility, because they are often alienated from decision-making spaces, the great political conversations about the courses of the peasant movement on the continent, and their struggles are pushed into the background and overlooked within the collective struggles. So they organize in their own women’s assembly spaces to ensure their effective political participation at all levels, and especially in decision-making spaces, with achieved gender parity, to collectively take on the cross-sectionality of the gender debate across all struggles and topics discussed within CLOC-La Via Campesina.

The struggle and organization of peasant women are born out of the historical struggles against the system of capitalist exploitation with its rural expressions—the economic, political, and social model of agri-water-mining-business—which massacres and encroaches the rights and lives of the peasantry, of Indigenous peoples, and Black rural populations. In this sense, women are engaged and support the building of the Global Campaign for Agrarian Reform. The struggle to defend seeds and a different production model in concord with peasant and Indigenous identities is also an important flag raised by peasant women, rejecting the use of agrochemicals, genetically modified organisms, and models that destroy natural goods. It is from women that the Campaign against Pesticides and for Life and the Campaign for Seeds as Heritage of the Peoples in Service of Humanity were established within the Latin American and global peasant movement. The struggle against domestic violence that ravages peasant women’s lives every day in different ways is another serious social problem that became visible with the Campaign For an End to Violence Against Women, adopted by the entire La Via Campesina movement.

From the political processes of organization and concrete struggles, you have the elements that establish the praxis—everyday, collective practice by peasant women, where a feminist militant awareness is developed among CLOC-La Via Campesina women. As they understand how important the feminist struggle is as a movement spearheaded by women who struggle for their rights, autonomy, and freedom, they realize that all the struggles that they had been waging over time were feminist struggles. And they start to name this accumulated political knowledge on peasant women’s organization and struggles as popular peasant feminism—it is the manifestation of peasant women’s struggles in movement within popular peasant struggles. This feminism reasserts a social and historical collective perspective that comes from peasant women’s reality, life, and work, aiming to deeply change society into a new society, with new socialist values, practices, and social relations.

It is a feminism that promotes everyday, concrete change in peasant women’s lives and in relationships between men and women, but also proposes and sees a horizon of structural change in society. This is why its feminist struggles also include challenging the capitalist system, by tackling the destructive and exploitative model of agrarian capitalism of rural transnational corporations. A feminism that struggles for the end of all forms of exploitation, oppression, subjugation, discrimination, and exclusion, and which, in turn, presents a project for peasant, Indigenous, and Black agriculture, which promotes peasant peoples’ good living, which feeds humanity and preserves nature. Therefore, popular peasant feminism is forged in the everyday struggle for resistance and confrontation of capitalism and patriarchy, particularly in their rural manifestations, and this is the contribution from peasant women for the building of pathways toward change for a socialist society, in which there is the humanization of humans and a true emancipation of women and men.

So we reaffirm that socialism and feminism are part of our strategic horizon of change. Therefore, we affirm a socialist and unsubmissive popular peasant feminism that challenges the patriarchal and bourgeois conceptions that operate for capitalist exploitation policies.

Iridiani Graciele Seibert, Lizandra Guedes, and Kelli Mafort live in Brazil and are La Via Campesina militants. This is an edited version of their article originally published by Outras Palavras.