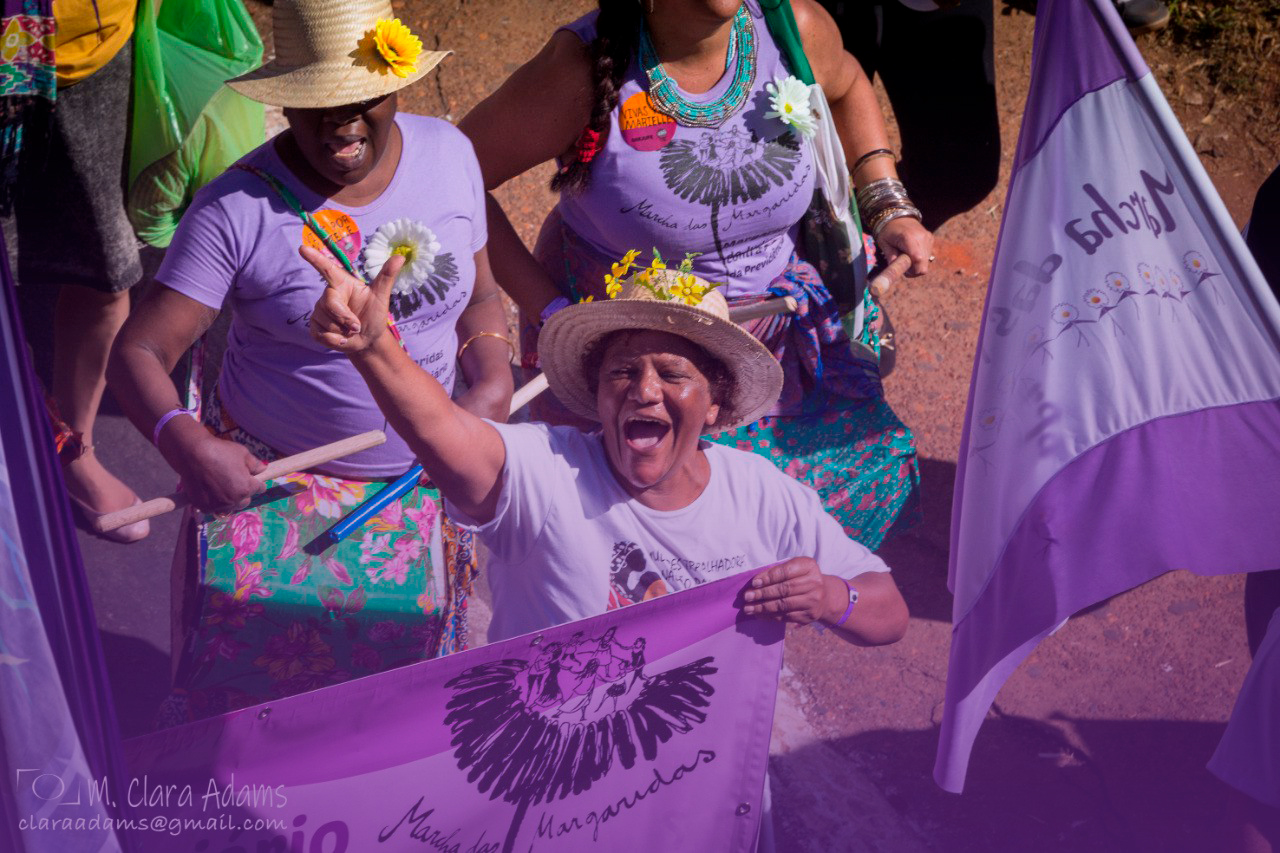 Food sovereignty: the trajectory of the World March of Women

Over these 25 years of the principle of food sovereignty, women have contributed to biodiversity and reorganization of labor.

La Via Campesina proposed the principle of food sovereignty in 1996 as the peoples’ right to organize access to healthy and high-quality food, respecting their food culture. So, they proposed going beyond the idea of food safety that, when used as a justification to import or receive food or seeds as international donations, dismantles the local peasant production and its distribution chains. The principle of food sovereignty was born and shaped amid the struggles against the World Trade Organization (WTO), created in 1995.  Other actions of La Via Campesina, such as the Seeds campaign: Heritage of the Peoples at the Service of Humanity, with the strong protagonism of women, also contributed to building this principle.

The 1st International Meeting of the World March of Women (WMW), held in 1998, defined a platform for claims against the root causes of poverty and violence, developed in the 2000 International Action. The first claim was to eliminate poverty by implementing national laws and strategies to ensure women were not discriminated against in “their right to have access to basic resources, such as drinking water, food production and distribution, to ensure food safety for the population”.

The 2nd International Action of the WMW, in 2005, organized the movement’s claims and world view in the Women’s Charter for Humanity and affirmed the guarantee of food sovereignty.  A collaborative process that allowed an expansion of the agenda of our movement through rural women’s contribution formed the basis of the Charter.

The 3rd Action, in 2010, organized the claims prepared by the National Coordinating Boards in fields of action, among which, defense of Common Assets — where we place the principle of food sovereignty — and the struggle to achieve it. We undertook, as a movement, to create and strengthen bonds between rural and urban women in food distribution chains.

The 4th Action, in 2015, concentrated these discussions in territories with mobilization, interchange, and education activities in agroecological production areas and areas affected by transnational corporations. In 2020, the 5th Action focused on corporations’ threats (seed control strategies and imposition of ultra-processed foods consumption) and feminist resistance against such threats.

Each of these moments highlighted that disrupting alienation from what we eat implies thinking of how household labor and care work is organized. We are committed to “establishing and strengthening links among urban and rural women through direct purchase experiences, fairs, and collective food preparation and distribution.  Exchanging knowledge and ensuring that the ‘urban point of view’ is not privileged concerning analysis and practice.  Struggling for a change in eating habits, from rubbish, low-quality imported foodstuffs, to locally produced, healthy foodstuffs.  Denouncing the hegemony of the agro-business industry and of the big supermarket chains in food distribution.”

We do not aim at reducing women’s labor overload through consumption of ultra-processed foods or transfer of care work to other immigrants, mostly Black and poor women. For poor women, the right to nutrition is a permanent struggle, which happens in collective struggles against high prices.

According to historians Tilly and Scott[1], already in 1911, housewives in Northern France refused to pay high prices, blocked train wagons, and confiscated food. More than one century later, we keep leading our struggles to change how the reproduction of life is organized. This translates into collective experiments that are part of feminism’s history.

Nyèleni: different subjects strengthening the principle and the struggle

During this journey, the alliance with La Via Campesina is a compass for us. Together, we integrate comprehensive alliances involving environmental movements such as the Friends of the Earth International, movements of fishers, indigenous peoples, food sector workers. The Nyèleni Forum for Food Sovereignty was a landmark amid such alliances. Held in 2007 in Selingué, Mali, the forum was named after Nyèleni, a mythical peasant woman who domesticated fonio, an important cereal for the regional diet.

We assembled there amid several social movements to solidify the principle of food sovereignty with the contribution of different sectors. We discussed women’s contribution to food production and preparation, including production for their own consumption, which in general is made invisible, as well as their knowledge and experiments that ensure diversity to species and practices. We discussed the conditions under which food is prepared: a type of household work mostly practiced by women and the economic value of which is ignored, as if it were a natural extension of the attributions assigned by patriarchal society to mothers and wives.

Affirming food sovereignty implies deprivatization and defeminization of meals preparation. At the same time, it means recognizing ancestral knowledge of women in this field and how they consolidate such knowledge to grow and select varieties according to taste or ease of processing.

In a declaration, women attending Nyèleni rejected “capitalist and patriarchal institutions that see food, water, land, peoples’ knowledge, and women’s body as commodities”. Struggle for food sovereignty includes liberation of territories from the industrial agriculture contaminants and violence, including violence against women.

Trying other ways of organizing nutrition and care

In our movement, some women cook together in popular restaurants, with creative ways of organizing labor and distributing their proceeds. For instance, they propose a rotation system among the people who will cook, the guarantee of free food for sick members, and pressure for direct subsidies from the state.

In Peru, women from Glass of Milk (Vaso de Leche) committees tried to buy milk directly from producers. At the same time, they strongly opposed free trade treaties that facilitate powdered milk import. During mobilizations, they occupied and blocked roads, and the kitchen was attributed a strategic relevance: extremely vulnerable people, who at first were just looking for a plate of food, approached the movements.  In a context of permanent crisis of capital, which intensifies with the socio-climate emergencies and the Covid-19 pandemic, solidarity ensures access to food and permeates the actions of our movements.

In Venezuelan conucos[2], in Mexican women’s mercaditos, among other experiences, women cultivate life in movement, transforming the economy and strengthening feminist connections. We met several times around a chicken soup in Brazil, a sancocho in Colombia, or a pap and chakalaka in South Africa. It is not by chance that, during the 2010 International Action in Brazil, the collective kitchen set there received militants with the motto “kitchen is the heart, without food there is no revolution”.

We keep resisting the threats of capital

Since the beginning of the World March of Women, we joined the struggle against GMOs not only due to the risks posed to health, which became evident in the increased use of pesticides, but also because we are against the transnational companies’ control and the expansion of market relations to all domains of life.

The very companies — conglomerates formed by agrochemical and pharmaceutical companies — that sell GMOs and pesticides that cause reproductive health issues are the same that sell assisted reproduction. Technologies passed from transgenesis to genome editing with no regulation or social control. Women’s bodies’ medicalization proceeded with the addition of hormones and antidepressants to appease the sorrow of living with no perspectives.

We already know the traditional corporations promoting the “green revolution” with machines, pesticides, seeds, chemical fertilizers, and banks. Now we are paying attention to technology companies accumulating and processing information to control a 4.0 agriculture. The legal framework for their interventions is built in spaces such as the recent UN Food Systems Summit, ordered by the Davos Forum, in the “multi-stakeholder” model, in which a corporation or foundation maintained by corporations is equivalent to a state.

Classifying gender as a “lever for change”, spaces like that bring proposals (in an alleged democratic place) such as women’s access to land and reduction of care workload. However, there is no questioning regarding ultra-processed foodstuffs, which reduce the time for preparation in the short term, but increase care work for a population made ill by excessive consumption of sugars, fats, and salt. There is also no questioning regarding land grabbing for industrial agricultural production, particularly for the production of agrofuels. When the connection between the food issue and the environmental issue is permeated by commodification, carbon capture seems a sustainable alternative, even being a form of soil instrumentalization with profitable potential for corporations such as Danone and Bayer.

On the other hand, women farmers over the world build soil life and fertility and assume social responsibility for fighting against hunger. In agrarian reform areas, they rebuild soil impoverished by intensive use, by contamination, by machine and cattle compaction. In urban agriculture areas, they produce soil over earthwork or landfills. The diversity of their crops uses spaces, luminosity, and synergy between plants.

Their relationship with collective purchase groups, direct and responsible, donations initiatives or exchange of food, and community kitchens bring the countryside and the cities together, and solidify the saying “eating is a political act”. The agriculture they made is based on relationships between people and relationships of people with nature. A woman farmer told us: “I take care of the plant, the plant takes care of me”.

Over these 25 years of construction of food sovereignty, walking side by side with La Via Campesina and numerous women peasants organized around the world, we keep practicing a type of feminism that feeds the principle of food sovereignty. Through feminism, we know that food sovereignty demands reorganization of a social reproduction that redistributes land, power, free time. May it be created through communication with different types of knowledge, with an agenda organized by women’s creativity and knowledge.

[1] Tilly and Scott are authors of Women, work and family, published by Routledge, London, in 1989.

[2]  Conuco is a traditional community or family agricultural practice of indigenous origins based on polyculture, mainly for subsistence or barter. The surplus may also be traded in popular markets.  Conuco represents the preservation of ancestral techniques, of native foods, and, in Venezuela, active resistance against the economic blockade.

Miriam Nobre is an agronomist, militant in the World March of Women in Brazil, and member of the Feminist Organization Sempreviva SOF [SOF Sempreviva Organização Feminista].