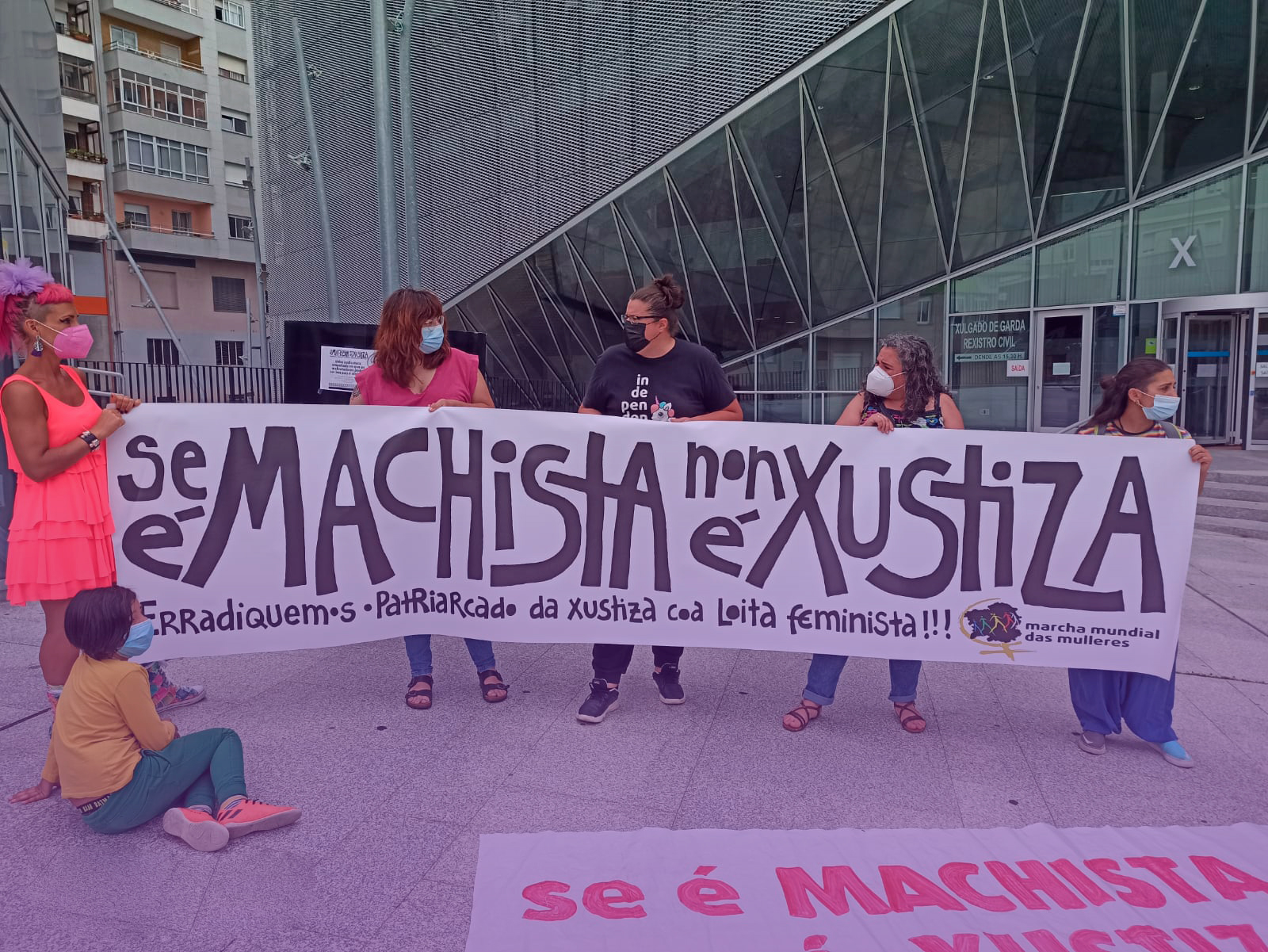 By the World March of Women in Galicia

Sexist violence has just been defined by the European Parliament as an “eurocrime,” equivalent to terrorism. The European Parliament is a democratic fiction within the European Union (EU), which is at the service of capitalism. Clearly, its enforcement will be similar to the current legislative situation in the Spanish state, which has been legislating on gender-based violence since 2004. It is simply a formal advancement, with no efforts, no resources, and no boldness in political decisions; thus, it does not translate into an actual advancement.

In Galicia, gender-based violence laws are more advanced in terms of classification. The Equality Act, passed in 2007, establishes that gender-based violence is not only those acts of violence perpetrated within the marital scope (as established in the federal law), but also allows identifying and reporting a broader range of types of violence. However, its enforcement is also subject to political will, currently non-existing in a right-wing government that has been cutting funds and reducing the number of employees in public facilities.

Our country is judicially dependent on the Spanish state. Therefore, our struggle is not simply waged on a national level, because we don’t have sovereignty to legislate on our own judicial system. This forces us to incorporate such factor in our struggles, denouncing the colonial logics and defending the full sovereignty of our countries to decide over all matters. The fact that we have more advanced laws regarding gender-based violence but we can’t transfer them to the judicial system, which is Spanish, is one of the biggest problems we face.

Together with the World March of Women National Coordinating Body in Galicia, we have conducted a work of analysis and denouncement of women’s situation one decade after the implementation of the laws for protection and prevention against gender-based violence. During this work, we have focused on the performance of the Judiciary Branch, the institution that plays a key role in the continuing perpetration of violence and one that refuses to put legislative advancements in practice, using different kinds of subterfuges and excuses.

We are organizing open meetings and discussions to share how the courts are treating reports of sexist violence and separation proceedings. When it comes to the latter, even when there is no prior report of gender-based violence, it starts when the separation proceeding is filed.

The first challenge we faced was to learn in detail the intricate legal world, which is based on a hierarchical and patriarchal structure. The Judiciary Branch stems from Francoism[1] and refuses to educate itself and assume the formal advancements that the feminist movement has managed to wrest from the political class. On the other hand, being able to count on women who experience these proceedings first-hand and on sisters who support them through the difficult and bureaucratic process imposed by the legal system has been decisive for our organization in this concern. This system turns women, once more, into victims of violence through institutional, social, and judicial violence.

The purpose of this campaign, which we have been conducting for almost two years now, is based on three lines of work we consider essential to our inquiry against the institutions. First, we need to think, on the one hand, of what is more immediate: what can we do to progress over the short term? Then, we need to consider the national dimension: how and through whom can we approach this struggle so that the conversation becomes broader and reaches media outlets to advance? And third, what is our final purpose? Which structural change do we need to implement in order to really live a life free of violence?

So we work at sessions, meetings, and mobilizations, aware that there are different working levels. We raise awareness within society regarding the importance of big social transformations, of education, and of new paradigms. This is how we keep moving forward, with small victories that allow us to organize more and more women.

We are aware that we live in a part of the world where we formally count on more advanced laws than other women do. But we also know that in Europe, as the center of capitalism, the written laws are not always enforced. Currently, our struggle has been tireless so that all such advancements we got during the mobilization of the last decade may finally come true. So that no woman is subject to violence when she brings charges against an aggressor or helps another woman to report a situation of violence. So that no aggressor is allowed to raise a child with the woman he assaulted. So that no judge blames us for having been raped and assaulted.

[1] Francoism was the dictatorial regime established in the Spanish state in 1939. It is named after general Francisco Franco, who remained in power until 1975.