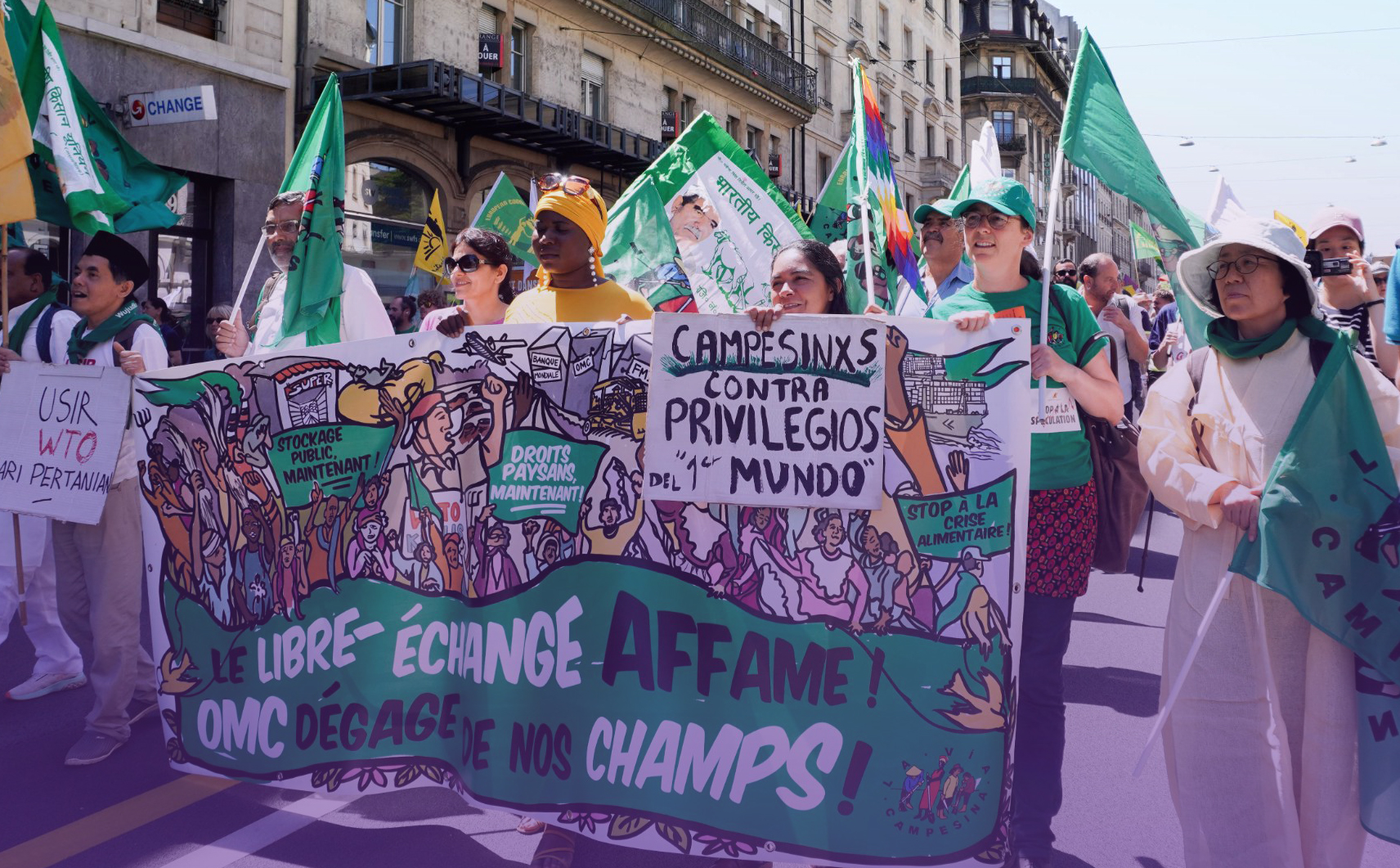 Free trade is an enemy of food sovereignty—this is what grassroots, peasant, and ecological movements strongly stated last week on the streets of Geneva, Switzerland. Between June 13th and 16th, 2022, government representatives met for a ministerial conference at the World Trade Organization (WTO). The WTO’s decision-making spaces are responsible for formulating the free trade agenda around the globe and facilitating corporate agreements across several industries, including the food industry. This is why, concurrently with the official meeting, delegations of grassroots organizations promoted an intense mobilization, with spaces for discussion, press conferences, and a demonstration. La Via Campesina sees it as a moment to denounce: free trade fuels hunger.

In an international statement, La Via Campesina called states to exit the WTO and proposed the creation of a new framework that considers the peoples’ ways of living, based on food sovereignty. The organization also shared statements by peasant leaders. Jeongyeol Kim, from the Korean Women Peasant’s Association and an International Coordination Committee (ICC) member of La Via Campesina, pointed out that “it is time to keep agriculture out of all free trade agreements,” adding that “the pandemic, and the shock and disruptions induced by war have made it clear that we need a local and national food governance system based on people, not agribusinesses. A system that is built on principles of solidarity and cooperation rather than competition, coercion, and geopolitical agendas.”

La Via Campesina brought a diverse delegation to Geneva, with more than forty people coming from southern Africa, southern Asia, Europe, and the Americas. “We are speaking from outside this institution, which we do not want to recognize, because there is no possibility of intersection. The WTO must be dismantled and destroyed, it must disappear, because its origins have been damaging peasant, Indigenous, and fishing communities around the world,” said Perla Álvarez from Paraguay, and member of the Latin American Coordination of La Via Campesina (CLOC-LVC).

It does not matter that the WTO is run by a Black woman if its policies continue to focus on the profits of big transnational companies and consequently increase hunger and malnutrition among Black women workers around the world. The logic of the market must be stopped and replaced with a new logic: a solidarity-driven feminist grassroots logic. The delegations took the moment of the meeting to further their pledges to create a new framework to support peasant rights.

In WTO-endorsed free trade agreements, local markets become unstable due to the offensive of an unregulated international market. Subsidies are offered to big transnational corporations or local corporate allies. There is a trend boosting digital agriculture, which turns rural labor into data and turns data into commodities.

Perla drew attention to the action of companies such as Monsanto-Bayer and Cargill, which monopolize and impose the use of transgenic seeds, and which are part of a group of companies that benefit from agribusiness and the industrial mode of production across its stages, from machinery to fertilizers to trade. “These companies grab our territories to expand, because as they expand over our communities and forests, they accumulate capital as they it need to maintain this production model,” she argued.

Perla also denounced monoculture farming that grows species that are not part of the food culture—an agribusiness practice that goes against food sovereignty, such as soybean production. “The agreements leveraged by these governments are part of our everyday lives; they are coming to our homes, our tables. Meanwhile, there is the destruction of the environment, climate change, and the impacts on our production, as they steal our seeds, reduce local varieties, and cause intense droughts, cold, rainfall, and heat.”

Free trade agreements tend to lead countries to depend on imported food products, which increases inequality, hunger, and malnutrition. Women are still excluded from the right to land, because they are not considered producers, even though they produce a lot and are significantly responsible for the care provided to the human beings and nonhuman beings around them.

The latest WTO meeting addressed topics such as food trade and Covid-19 vaccines. Susan Owiti, of the Kenyan Peasants League (KPL), argues that “they interfere at the local farmer management systems, but the solutions they create are false. They’re trying to bring a solution for the food crisis, yet we know that 70% of the food that has been produced is produced by the peasants inside their countries.” The impact of the WTO on the lives of African farmers happens, for example, when imported products have reduced tariffs. These foreign products have increased across the continent, leading to reduced demand and market space for domestically produced goods.

Moreover, in Kenya, if you are a farmer who wants to grow food using native seeds, you have to have a license. “Whatever the WTO tries to introduce in terms of agriculture, it’s a way of oppressing peasants. When we’re talking about food sovereignty, we’re talking about ownership, whether it is ownership over our lands, over our seeds, or over our resources. But what the trades made through the Organization and our government was to make seeds licensed, not allowing peasants to work with them, or making them pay to cultivate such seeds,” Susan explained. “We believe that food sovereignty and agroecology are the solution to climate change, so we cannot sit down and discuss with the same people that are causing the problems. They want to take away our indigenous seeds and patent them, and that’s their solution, but the peasants should own their own resources and not have to be licensed to use them.”

Many countries in the global South are seeing increasing prices affecting food and other products. And one of the first categories to experience the food crisis is the peasantry who produces food and cannot trade it. “Peasants produce, but they’re being denied access to the market. The government will give priority at the market to big farmers and transnational companies. Sometimes you can’t sell the products and your production spoils.” Women are especially impacted, as they work both in the farms and caring for their homes and families, but they are not entitled to the earnings resulting from their labor. “Women play a big role in food production, but they have even less access to the market,” Susan argued.

Amid these issues, building food sovereignty is a challenge that must be addressed across the spaces organized by grassroots movements, and it requires us to overcome the power of free trade over our lives, labor, and food. As Susan said, “we know what the WTO is, so we know that they that are using a cover-up to pretend that they are coming with the solution, when we know that they are the cause of the problem.”