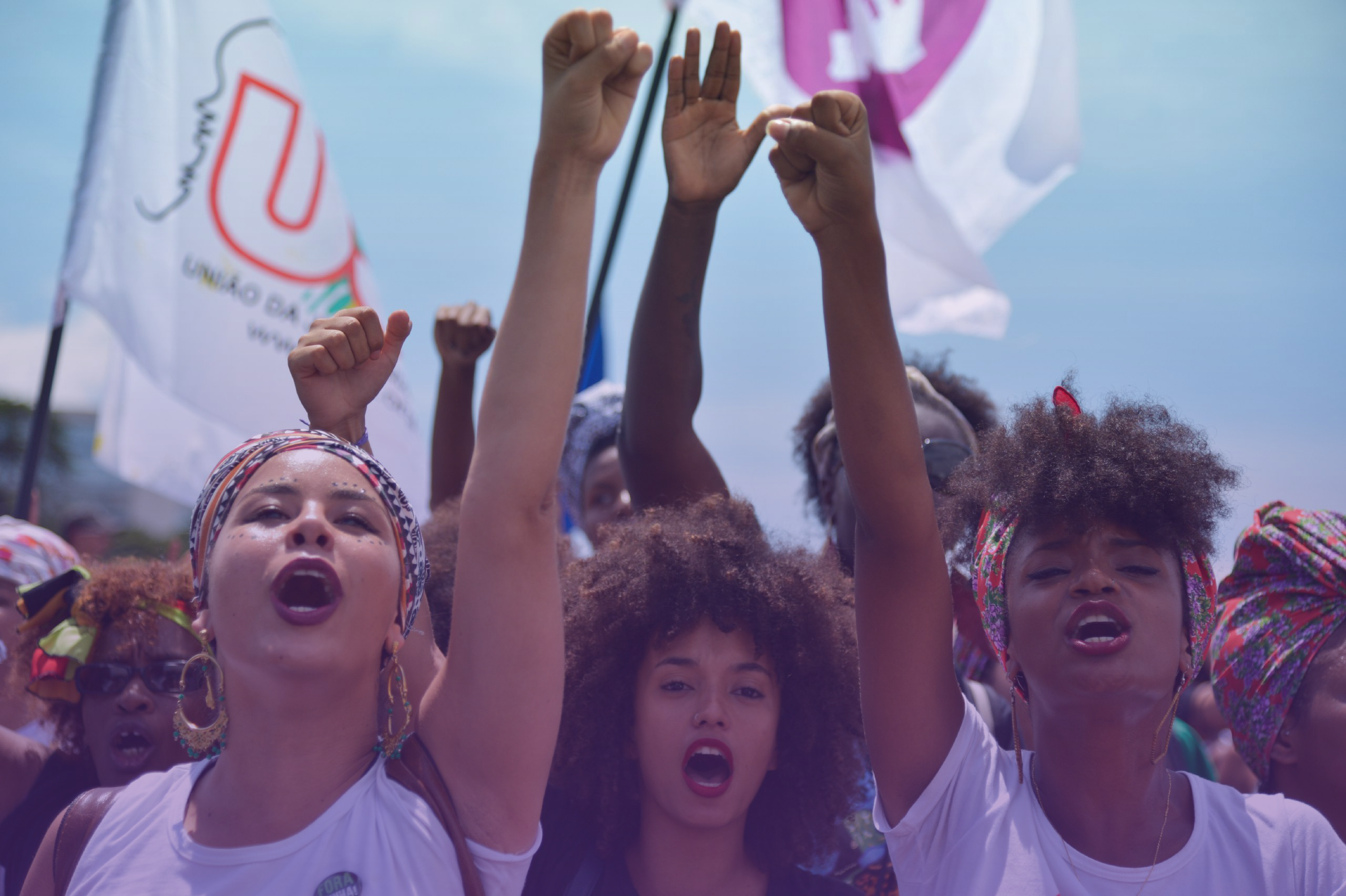 Black Women in the Americas Resisting To Live, Marching To Transform

The words of Black women from four countries across the Americas show paths toward feminist and anti-racist struggles in different territories.

The different territories that make up the American continent have different histories. All of them, however, are marked by capitalism, patriarchy, and racism, exploitation and domination systems that are deeply intertwined and brutally attack Black women’s lives.

Resisting and transforming are two verbs that are part of the political repertoire of grassroots feminism across the Americas and the world. A key aspect of this resistance has been spearheaded by Black women, who play a primary role and make up the majority who are carrying out effective actions to fight inequality, oppression, and exploitation.

In July, when International Afro-Latin American, Afro-Caribbean, and Diaspora Women’s Day is celebrated—and every month—Black feminists continue to share the collective and diverse experiences they have accumulated over time in defense of life, bodies, and territories. Experiences that reject the false solutions offered by the market to tackle systemic oppressions and expose the violations committed by authoritarian, corporate, imperialist, and militarized states. At the same time, they also promote political alternatives that are built from collective organizing, grounded in the appreciation of diversity and solidarity between women, the working class, and the peoples.

These alternatives put life before profit. Putting life at the center of the political, economic, and social debate is what feminism has continuously done. The collective political actor of this project must be made visible just as often. Militants across the continent have been asserting: the face of the struggle in this territory is the face of a Black woman!

“We resist to live, we march to transform” is a slogan of the World March of Women that sums up how two pathways intertwine: sustaining life (and this has been done collectively, in the communities, through the initiatives undertaken by women, especially Black women who spearhead them) and changing the world and women’s lives in one movement, until we are all effectively free from racism.

Last week, women from around ten countries in the Americas have come together for an online activity of the World March of Women to share our experiences and perspectives toward our struggle. The activity was mediated by Mariana Lacerda, from Brazil, and streamed in Portuguese and Spanish. Cultural performances were presented by Luta Cruz, from Chile, and Gabi da Pele Preta, from Brazil. We collected excerpts from the contributions of the five participants for Capire. Read them below:

The Federation of Cuban Women [Federación de Mujeres Cubanas] was first established to promote equality for women on the island. We soon realized that building a revolutionary exercise would not be possible without socialism. In the Caribbean, not just Cuba, even though slavery is over, there are still processes of Western domination. In the Caribbean, and Cuba specifically, being Cimarrónes[1] and libertarians is a foundational factor of the people. We see how this is reflected on Cuban feminism, which must take on its own particular aspects. One challenge is solidarity. Women are there, in every field of the emancipation battle. We, Black women, not only take on the roles of domestic and care work, but we have also been deeply involved in journalism, academic work, professions we practice based on the subjectivity of our everyday lives.

We must break apart from the institutional views that regard all women as the same. Yes, we are equal before the law, but we are not equal in life. Public policies must be conceived to regulate work conditions in the informal sector and the service industry, where most workers are Black women, with no labor rights or social security. And we must conduct actions especially aimed at women whose social disadvantage is striking, because we are the ones that experience teen pregnancy more often, we are the heads of our households, and we suffer with high poverty rates.

The Garífuna people was born on the island of Saint Vincent, as a mix of Africans who were brought to the Americas due to slavery and the Indigenous Arawak and Carib people that already lived on the island. In Honduras, the face of the struggle is the face of a woman. We see how they keep moving forward, caring for culture and traditions, for a worldview and co-existence with so many years of history. We live in a state that violates the human rights of Indigenous and Black communities. The Garífuna people is struggling as activists disappear in the hands of military officials. And why are they doing that? Because the Honduran state wants the lands of the Garífuna people—which they own, which are their cultural heritage. The state, eager to grab the lands of the Garífuna people—lands that our mothers and grandmothers have tended—, is criminalizing our leaders. A few months ago, they ordered the arrest of two Garífuna women leaders.

Women struggle with extreme poverty and criminalization. They struggle when state officials come to take their homes. Their sons and daughters see the officials and become immediately frightened that their mothers could be beaten up. We hear news of women activists and human rights defenders who are murdered, and the media says they were murdered for crimes of “passion.” For all that, we continue to struggle, we do not yield, we write our stories, and we raise our voices.

Brazil is a country that has, for roughly 350-400 years, enslaved Black men and women. In its abolition process, it did not build the possibility of these people to return to their ancestral nations nor created the conditions for them to enjoy full citizenship. Quite the opposite: this process has criminalized their culture and demonized their religion. The [1890] Loitering Law was used to start to incarcerate Black people. The [1850] Land Law made it impossible for Black people to access land, resulting in their marginalization as they were forced onto the outskirts and remote areas, where they built our favelas [slums].

This system feeds itself: capitalism, which exploits the people and is rooted in the maintenance of inequalities, finds people it can exploit and further belittle. Today, we are the ones who cry when stray bullets invariably hit the same bodies—our bodies and the bodies of our children. We must act upon everyday activities to make sure we survive and live a life of dignity and racial equality, changing the conditions that are the outcome of a historical process that has put us in subalternity.

I want to bring Charity Maimouna Hicks to this space. She was murdered on the way to a meeting of United Nations. That was in 2014. She was also water warrior, food justice warrior. I want to bring Mama Lila Cabbil, assistaent of our beloved Rosa Parks, of the civil rights movement. She was a water warrior, she foaught vehemently against racism. I want to talk about bBlack women’s work and show pictures so we can see the faces of those who much too often go unrecognized, unappreciated.

We in Detroit have severe food deserts, and the work mamma Hanifa Adjuman does, teaching food justice and farming to children, is so valuable. It’s significant that Mama Rhonda Anderson, a Black woman, was fighting for many years for our environmental justice. Even unsupported, she fights for clean air. Detroit has the most polluted zip codes in the entire state. People have been dying of cancer and all dieseases related to the pollution that the companies emit. Besides that, the organization We The People of Detroit have, as a mission, to get water. The city decided to cut off the water of its citizens when they don’t pay their bill, even if it’s a 50-cent bill. But there are many corporations, like the electricity company, that have not paid their bills of hundreds of thousands of dollars. It’s about displacing people from their homes. There is a war against women. (…) For all that, restoring lands back to Black and Indigenous people is a huge thing.

The history of Black women is a fundamental part of the history of the struggle of Latin American and Caribbean peoples. More than resisting, women who organize collectively to fight capitalism, patriarchy, and racism have built a political repertoire that affirms that another world is possible. With our struggles intertwined, with a radical vision, we go on to transform all social structures, in the struggle in defense of our territories.

The structures of domination run through our lives. Violence is part of the process of domination and the organization of racism and colonialism in the world. We denounce the erasure of our heroines, women who contributed to our liberation. Therefore, I want to salute the experience of Capire, which has stitched together the experiences that constitute our resistance. We have the challenge of telling our stories. The experiences of sociability of quilombos[2], for example, teach us many things about survival and other forms of relationships. It is in the concrete reality, in the solidarity networks for example, that we perceive the intersectionality and the imbrication between gender, race, and class.

[1] In some Spanish-speaking countries in the Americas, Cimarrónes are descendants of Black Africans who resisted European rule and slavery and built their own settlements and towns in colonial times, away from the areas where they were enslaved. Today, Black activists continue to use the term to reclaim their history of resistance.

[2]  Quilombos are communities of resistance and refuge, originally created by Black people who were enslaved in colonial times in Brazil. Many communities are still alive today and the term is still used to refer to spaces of Black tradition, resistance, and social organizing.

Bartolina Sisa: An Aymara Fighter Against the Spanish Empire

On International Indigenous Women’s Day, meet the story of Bartolina Sisa, an Indigenous Bolivian fighter from the 18th century.

We remember the words and struggles of the activist Shashi Sail about her experience fighting for women’s autonomy.