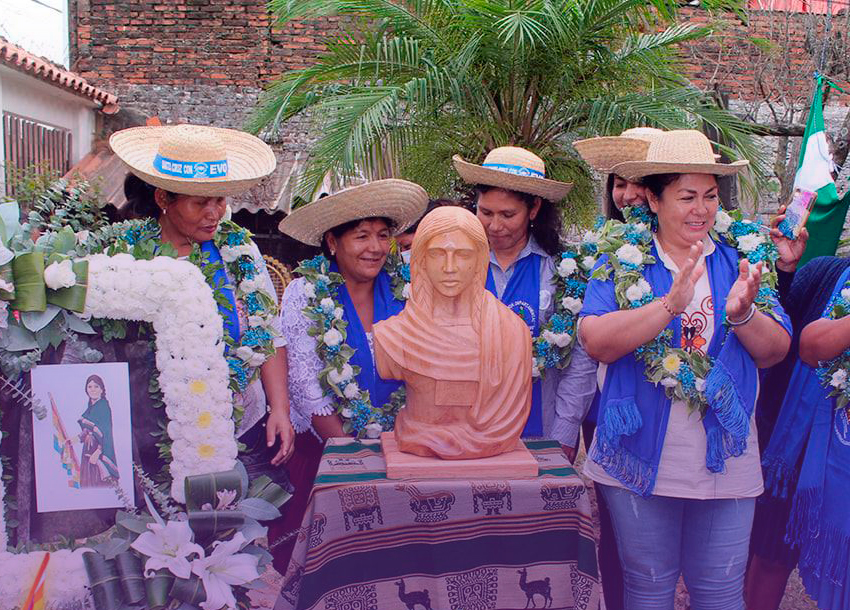 Bartolina Sisa: An Aymara Fighter Against the Spanish Empire

On International Indigenous Women’s Day, meet the story of Bartolina Sisa, an Indigenous Bolivian fighter from the 18th century.

Bartolina Sisa was an Indigenous Aymara woman, a trader, and a guerilla fighter who led a number of battles in the uprising against Spanish colonialism, alongside her partner Tupac Katari, an insurgent leader, Inca King of the Aymaras and Vice King of the Inca Empire. Indigenous groups in the region challenged the Spanish rule and fought against the oppression their people was subjected to.

The Spanish invasion of the American continent introduced violence and exploitation as practices marked by patriarchy, racism, the development of capitalism, and slavery. Bartolina was one of the women who took charge of the rebels in her region. Fighting with her rifle and display of leadership, Bartolina and other sisters, such as Gregoria Apaza, organized grassroots battalions against the Spanish Empire. She was responsible for recruiting fighters, organizing supply logistics, and controling movement around the rebel territory.

Looking Back at the Story of Bartolina Sisa

According to studies that look back at her life story, Bartolina Sisa was likely born on August 24th, 1753, in the corregimiento [Imperial province] of La Paz, an area then known as Upper Peru, now Bolivian territory. While she was born into a well-off family who traded coca leaves, she never disregarded the reality that other people faced.

Bartolina took part in the first siege of the city of La Paz. In early 1781, she organized camps during the insurrection in other towns including El Alto and areas of the capital, such as Killi Killi, Poto Poto (now Miraflores), and Pampahasi. On March 13th that year, the group set up court in La Ceja, eastern El Alto, shutting down all access to the city. They were able to maintain their occupation for several weeks until June, when it was broken by the intervention of the Army. According to some sources, Bartolina was betrayed and captured a month later. She was tortured to turn in other leaders of the Indigenous insurgence, but there is no evidence that she ever said a word. Some reports indicate that, on her birthday, the organization she was part of hosted a “party” for her, making sounds around the prison where she was being held, as a demonstration of political strength and cultural affirmation.

After a second rebellion took siege of La Paz once again, Spanish forces captured and sentenced rebel leaders to death, including Tupac Katari, who was publicly dismembered. He is credited with saying words that still live today, “they will only kill me, but tomorrow I shall return and I will be millions.”

It was very difficult to maintain the several uprisings that took place in 1781, as the Spanish apparatus moved against them. Nevertheless, they played a key role in the independence process. According to an investigation by historian Pilar Mendieta, who looked into the journals of a oidor [judge] and member of the local elite, “he was surprised by how Indigenous women played a primary role in political actions usually regarded as valid only in the male realm, as they fought side by side with their husbands, throwing stones and even leading armies. Indigenous women were taking action outside the walls of the city under siege, on the surroundings ruled by the Indigenous group.” The judge wrote in his journal, “they surrounded the city with their women, as if they had gathered ten or twelve thousand of them; the men descended and attacked from all sides, with an unceasing horde of rocks.”

Bertolina Sisa was killed on September 5th, 1782, 239 years ago. She was brutally murdered by the colonial rule that wanted to instil fear among her rebel comrades. As the vicious account unearthed by Mendieta describes, “(…) she shall be taken from the quarters to the Main Square, her neck tied to a horse’s tail with a esparto rope, wearing a leather and feather coroza [a pointed hat used by the Spanish invasion and Inquisition] on her head and holding an aspa [bands forming an x-shaped cross] on a wooden stick in her hands, and after the town crier announces her crimes, she shall be taken to the gallows and hung until naturally dead, her head and hands later stick to the pillory and labeled accordingly for public punishment in Cruz Pata, Alto de San Pedro, and Pampajasi, where she was camping, and (…), after a few days, her head shall be taken to the villages of Ayo Ayo and Sapaaqui, where she was born and lived, and her ashes shall be scattered where deemed convenient.” She was murdered for being a fierce and radical leader in the battle against colonial rule. Her struggle never fades and becomes the seed of new women fighters.

Since 1983, the day of Bartolina’s death marks International Indigenous Women’s Day, when the historical lives of Indigenous women fighters of the Americas and other parts of the world are celebrated. In 2005, the Bolivian National Congress acknowledged Bartolina Sisa as a national Aymara heroine. But her struggle remains alive beyond dates of celebration and institutional titles—it pulsates in the battles waged by Indigenous women organizing in Bolivia, Peru, and other territories of Indigenous peoples, for the right to land and sovereignty, for democracy, and for the acknowledgement of pluricultural Indigenous Americas. What grassroots organizations today still carry from Bartolina is their loyalty to the struggle and their insubordination.

Indigenous organizing spaces are “sacred places where our ancestors discussed the struggle for freedom, justice, and dignity. Her struggle was not in vain. Glory to Bartolina Sisa!” Lucho Arce, elected president by popular vote after the coup staged in 2019, said these words two weeks ago on Bartolina’s birthday, during a visit to a historical site where 18th-century organizations held political meetings.

One organization named after her is the “Bartolina Sisa” National Federation of Peasant Women of Bolivia (Confederación Nacional de Mujeres Campesinas de Bolivia “Bartolina Sisa”—FNMCB). With this tribute, they connect the past of patriarchal and colonial exploitation with the necessary struggles of present times, in face of new and old strategies of domination. Indigenous women play a primary role defending territories and seed diversity and resisting against agribusiness and extractivist projects. Every day they are building food sovereignty and challenging state, racist, and patriarchal violence, while also keeping their ancestral wisdom alive.

“The coup cut us like an axe. The allies of madam Jeanine Yáñez drew their arms and machine guns. Here in the city of Montero, they shot and killed a boy. The coup plotters don’t want to see Indigenous and peasant women like us. Right now, we are fighting, arguing with the governor of Santa Cruz de la Sierra, Luis Fernando Camacho.

We work to support our people. We grow maize and we don’t want transgenic seeds, we want to live with natural seeds. But they, with their seeds, keep trying to stop our buen vivir [good living]. Through violence, abuse, and humiliation, right-wing people don’t recognize us as Bolivian, Indigenous, and farmers of the land. We are being forced out of our communities, they treat us like mobbers. We are not mobbers, we are people in need—this is why we organize. As peasant and Indigenous women, we keep fighting and we will continue to do so, just like our sister Bartolina, who stood up for the poor.”