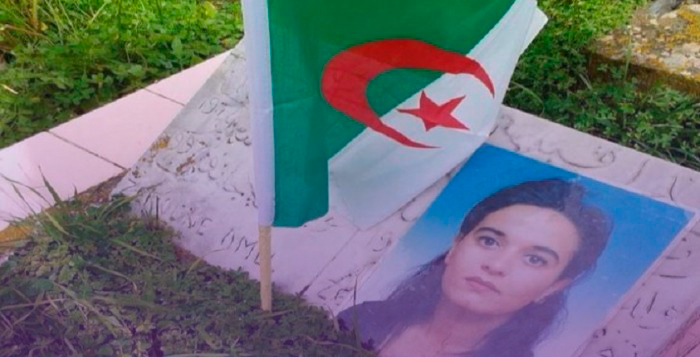 In a touching letter, the mother of Amel, a young woman murdered for resisting the rules imposed by Islamic sectors, denounces the terrorism experienced by Algerian women

For over 10 years, political Islam and the ideology of death have inflamed Algeria and made it bleed. The blood of Algerians flowed freely. Women paid a high price. Considered to be spoils of war, Islamic terrorists kidnapped, raped, and murdered them, using methods that are unspeakable in terms of savagery. They beheaded them, gutted pregnant women, and burned them alive.

Amel is an example of this. She was murdered for resisting the decree that girls had to cover themselves with a veil and stop working and studying. Amel resisted and paid with her life. Just like her name, she too carried hope, and they decided to put an end to that hope. Before Amel, high school student Katia Bengana was murdered for refusing to wear a hijab. Karima Belhadj was shot to death because she was a secretary with the National Police. She was the first woman murdered, when she was 19 years old. Aicha Djelid was beheaded in the presence of her three daughters under atrocious conditions. The murderers ordered the daughters to go pick up their mother’s head…

How many of them were anonymous, who have been kidnapped, who have been gang-raped, who have been beheaded and thrown into wells, among other things. Political Islam is the enemy of life. We won’t forget, we will talk about this as long as we live, so that it never happens again here or anywhere else.

My daughter, my darling, my little one, my love… you were my light, my health, my happiness, my joy of living, you were my life. I will love you until the end of my days, I can’t forget the fateful night when I heard the bad news brought by some fifteen policemen, telling me that Amel had just been murdered by terrorists… those terrorists that I personally classify as cowardly criminals, murderers, monsters… They took your life when you were on your way to education and knowledge.

Oh, Amel, even today, over a decade later, it’s hard to accept your absence, your murder. They decapitated you with a knife, your sweetness, your innocence. You loved life, you never thought you would die like this, in your country, at 22 years and a few days old.

I always remember the reassuring things you used to say to me with a smile: “I love you mom. In a few months I’ll finish my studies, get a job, buy a car and take you for a ride wherever I want!” And you thought before speaking again: “Mom, you’ve suffered a lot in life, but I’m going to make you happy…” Unfortunately, fate decided otherwise. You died a heroine, and heroines never die.

Amel, my darling, I’ve never forgiven nor forgotten. You were the one who said to me: “Mother, terrorists don’t scare me. They forbid girls to go to school, but I will continue my studies until the end.” I remember when you were little, I used to hit you for anything, but you never cried. Also, since that winter day in the grim year of 1997, you have been sleeping with your father Mokrane, who also loved you very much. No doubt you have inherited his courage. You were really brave.

We do not take up arms to avenge you, but our testimonies, our marches, our dignity and, above all, our writings, are stronger than your tormentors who tremble and suffer. Our pain and our cause are the only Truth, and this regime that imposes amnesia on us, and also its lackeys, its pseudo-opposition and the Islamic terrorists, are all afraid of the truth. The truth will outlast them because we refuse to forget, we refuse to forgive, I refuse to forget my daughter Amel.

You who raise your voices to turn the page on the history of Algeria that has been bloodied by Islamic terrorism, you who protected your children when ours fell under the bullets of the murderers, I say to you: Stop reaching out your hands to the murderers of my darling daughter Amel, stop pleading for those who made me a victim of terrorism and a chronically ill person, stop lying to future generations, stop falsifying history. How shameful it is to hear about this decree of “reconciliation.” No, I refuse to put terrorists, their parents, their children on the same level as me and my children. I will never accept that the State justifies and deems innocent the murderers, those Islamic integralists who have their hands stained with the blood of Amel and 200,000 innocent victims. They will never be able to force the word “forgiveness” on me, I will never forget or be silent until they bury me next to my daughter Amel. The terrorists made us mourn when we wanted to live. We didn’t choose to be victims of terrorism, but the terrorists chose to kill.

What reconciliation? I refuse to let them release Islamic murderers without enforcing the law. How difficult it is for me to see the parents of my daughter Amel’s murderers waiting for the return of their “terrorist” children alive, “victorious,” pardoned, amnestied, forgiven and acquitted of their individual and collective crimes. This letter is full of shame. How alive my wound still is under the eyes of people who believe in this “peace.” What peace? The peace of cemeteries.

Amel did not die for nothing. She died for the democratic and fair State that she hoped to one day know. She died like the heroes of just causes, like those of the great revolution, like Abane, Si El Houas, Amirouche, Ben Mhidi… so that democratic Algeria may live. Amel died as did Katia Bengana and Nabila Jahnine, Matoub and Kamel Amzal, Yefsah, Tahar Djaout, Mekbel, Zinou and Saïd Tazrout… May they all rest in peace. Each and every one of you has paid with your lives for freedom and democracy. Thanks to you, we will always keep our heads up. For you, we will continue the fight so that no one is forgotten, so that the victims of Islamic integralism are never forgotten, so that freedom and democracy triumph. We will continue to say no to oblivion and amnesty, which are afflictions that destroy our souls.

I’m proud of you, Amel. You are a martyr. You know, I planted a fruit tree and waited for it to blossom and bear fruit. The day the fruits ripened, the murderers appeared and destroyed everything; my dream, my expectations, my future… For your memory, I am fighting every day. This Power – just like the other traitors – cannot look me in the eyes because it has clenched the bloody hands of the monsters who have done me so wrong. But I’m still here. I am Houria; el houria, tilelli, “the freedom” we never knew.

The years go by fast, so fast… Nawel, Anissa, Lamia and Amina are still mourning you, Amel. You died for a noble cause, freedom, democracy, the republic, because, wanting to educate yourself, you claimed all these noble ideals. You died, but you were not the only one. There are thousands of martyrs in this Algeria that knows only regression, denial, arbitrariness, massacres, and ignorance. I regret that force is more powerful than the law to allow murderers to be free, appreciated, consulted by high authorities and courted by pseudo-opponents. It does not matter. The day will come when this “respectability” due to money will begin stinking. For you, Amel, and for everyone who paid the high price everyone knows, there will never be an Islamic State.

Amel ya lebniya, ya ayniya, ya el kabda taâi, my life has become uninhabitable. I’m not the same mother I used to be. I don’t do housework anymore. I no longer cook the tasty dishes you loved so much. I no longer wear henna. I no longer eat tbikha, a dish you wanted to try a week before you were murdered. I have no more will to live, but I have no choice. I resist, despite my illness, for you, for your memory, so that your death is not in vain. I gave you and your sisters a good education and that’s what I’m proud of.

Sleep in peace, dear Amel “hope.” Nobody has the right to forgive for me. I demand the truth and that justice be done, that your murderers and those responsible for the “crime against humanity” be brought to justice and punished.

I love you Amel, and I also love your sisters, who are by my side. They pamper me, but my heart still bleeds, my pain is alive and will remain so. I cried for you, I cry for you, and I will cry for you all my life.

Glory to our martyrs, glory to all victims of terrorism.

The introduction of this article was written by Aouicha Bekhti, an activist of the World March of Women in Argelia. Houria Zouani Zanoune’s letter can be found on the book Katia Bengana: la lycéenne qui a nargué l’islamisme [Katia Bengana: The schoolgirl who taunted Islamists], written by Allas Di Tlelli and published in 2018.

[1] “Asirem” is the Berber word for hope. We have chosen to keep the term from the original French letter.