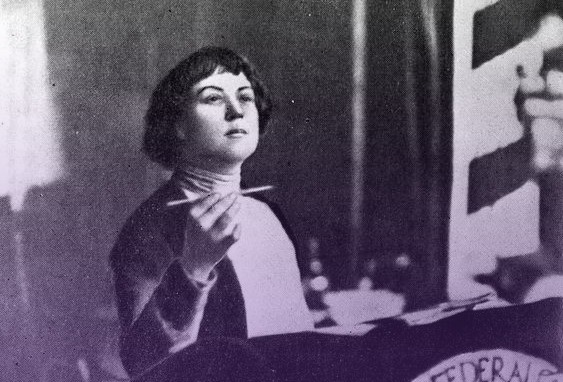 Alexandra Kollontai: The Years of Revolution

Alexandra Kollontai was a Russian revolutionary who fought bravely against the brutality of tsarism, political persecution, and the reality of hunger and war that ravaged life in pre-Soviet Russia. During the revolution, she played an important role mobilizing women and the working class in general. She organized radical contributions about women’s emancipation and the role of the family and sexual morality in the maintenance of capital. In the early days of the Soviet regime, she spearheaded socialist policies for women’s liberation.

The text below is her first-person account of this period. We selected parts of the “The Years of Revolution” section from her 1926 book “The Autobiography of a Sexually Emancipated Communist Woman.”

So overwhelming was the rush of subsequent events that to this very day I really do not know what I should describe and emphasize: what have I accomplished, desired, achieved? Was there altogether an individual will at that time? Was it not only the omnipotent storm of the Revolution, the command of the active, awakened masses that determined our will and action? Was there altogether a single human being who would not have bowed to the general will? There were only masses of people, bound together in a bipartite will, which operated either for or against the Revolution, for or against ending the war, and which sided for or against the power of the Soviets. Looking back one perceives only a massive operation, struggle, and action. In reality there were no heroes or leaders. It was the people, the working people, in soldiers’ uniform or in civilian attire, who controlled the situation and who recorded its will indelibly in the history of the country and mankind. It was a sultry summer, a crucial summer of the revolutionary flood-tide in 1917!

One of the most burning questions of the day was the high cost of living and the growing scarcity of vital necessities. Thus the women of the poverty-stricken strata had an indescribably hard time of it. Precisely this situation prepared the terrain in the Party for “work with women” so that very soon we were able to accomplish useful work. Already in May of 1917 a weekly called “The Women Workers” made its debut. I authored an appeal to women against the high cost of living and the war. The first mass meeting, packed with thousands of people, that took place in Russia under the Provisional Government, was organized by us, by the Bolsheviks.

I was a member of the Soviet executive which, in reality, was the guiding political body of the moment, to which I belonged as the only woman and over a long period. In May of 1917 I took part in the strike of women laundry workers who set forth the demand that all laundries be “municipalized.” The struggle lasted six weeks. Nevertheless the principal demand of the women laundry workers remained unmet by the Kerensky regime.

At the end of June, I was sent by my Party to Stockholm as a delegate to an international consultation which was interrupted when news reached us of the July uprising against the Provisional Government and of the extremely harsh measures that the government was taking against the Bolsheviks. Many of our leading Party comrades had already been arrested, others, including Lenin, had managed to escape and go into hiding. (…) By order of the Kerensky regime I was arrested on the border of Torneo and subjected to the most boorish treatment as a spy (…)

The more incredibly the regime conducted itself towards the Bolsheviks, the more their influence grew. The march of the White general Kornilov on Petrograd strengthened the most radical elements of the Revolution. The people demanded that the jailed Bolsheviks be freed. Kerensky, however, refused to free me and it was only by an order of the Soviet that I was released from jail upon payment of bail. But already on the next day, Kerensky’s decree that I be placed under house arrest hung over me. Nevertheless I was given my full freedom of movement one month before the decisive struggle, the October Revolution in 1917. Again my work piled up. Now the groundwork was to be set for a systematic women-workers movement. The first conference of women workers was to be called. It also took place and it coincided with the overthrow of the Provisional Government and the establishment of the Soviet Republic.

At that time I was a member of the highest Party body, the Central Committee, and I voted for the policy of armed uprising. (…) Then came the great days of the October Revolution. Smolny became historic. The sleepless nights, the permanent sessions. And, finally, the stirring declarations. “The Soviets take power!” “The Soviets address an appeal to the peoples of the world to put an end to the war.” “The land is socialized and belongs to the peasants!”

The Soviet Government was formed. I was appointed People’s Commissar (Minister) of Social Welfare. I was the only woman in the cabinet and the first woman in history who had ever been recognized as a member of a government. When one recalls the first months of the Workers’ Government, months which were so rich in magnificent illusions, plans, ardent initiatives to improve life, to organize the world anew, months of the real romanticism of the Revolution, one would in fact like to write about all else save about one’s self. (…) One can easily imagine the enormous demands these tasks made upon a small group of people who, at the same time, were novices in State administration. In a clear awareness of these difficulties I formed, immediately, an auxiliary council in which experts such as physicians, jurists, pedagogues were represented alongside the workers and the minor officials of the Ministry. The sacrifice, the energy with which the minor employees bore the burden of this difficult task was truly exemplary. It was not only a matter of keeping the work of the Ministry going, but also of initiating reforms and improvements. New, fresh forces replaced the sabotaging officers of the old regime. A new life stirred in the offices of the formerly highly conservative Ministry. Days of grueling work! And at night the sessions of the councils of the People’s Commissar (of the cabinet) under Lenin’s chairmanship. A small, modest room and only one secretary who recorded the resolutions which changed Russia’s life to its bottommost foundations.

My efforts to nationalize maternity and infant care set off a new wave of insane attacks against me. All kinds of lies were related about the “nationalization of women,” about my legislative proposals which assertedly ordained that little girls of 12 were to become mothers. A special fury gripped the religious followers of the old regime when, on my own authority (the cabinet later criticized me for this action), I transformed the famous Alexander Nevsky monastery into a home for war invalids. The monks resisted and a shooting fray ensued. The press again raised a loud hue and cry against me. The Church organized street demonstrations against my action and also pronounced “anathema’ against me…

There were differences of opinion in the Party. I resigned from my post as People’s Commissar on the ground of total disagreement with the current policy. Little by little I was also relieved of all my other tasks. I again gave lectures and espoused my ideas on “the new woman” and “the new morality.” The Revolution was in full swing. The struggle was becoming increasingly irreconcilable and bloodier, much of what was happening did not fit in with my outlook. But after all there was still the unfinished task, women’s liberation. Women, of course, had received all rights but in practice, of course, they still lived under the old yoke: without authority in family life, enslaved by a thousand menial household chores, bearing the whole burden of maternity, even the material cares, because many women now found life alone as a result of the war and other circumstances.

In the autumn of 1918 when I devoted all my energies to drawing up systematic guidelines for the liberation of working women in all areas, I found a valuable support in the first President of the Soviets, Sverdlov, now dead. Thus the first Congress of Women Workers and Women Peasants could be called as early as November of 1918; some 1147 delegates were present. Thus the foundation was laid for methodical work in the whole country for the liberation of the women of the working and the peasant classes. A flood of new work was waiting for me. The question now was one of drawing women into the people’s kitchens and of educating them to devote their energies to children’s homes and day-care centers, the school system, household reforms, and still many other pressing matters. The main thrust of all this activity was to implement, in fact, equal rights for women as a labor unit in the national economy and as a citizen in the political sphere and, of course, with the special proviso: maternity was to be appraised as a social function and therefore protected and provided for by the State.

A serious illness tore me away from the exciting work for months. Hardly having recovered–at that time I was in Moscow–I took over the direction of the Coordinating Office for Work among Women and again a new period of intensive, grueling work began. A communist women’s newspaper  was founded, conferences and congresses of women workers were convoked. The foundation was laid for work with the women of the East (Mohammedans). Two world conferences of communist women took place in Moscow. The law liberalizing abortion was put through and a number of regulations of benefit to women were introduced by our Coordinating Office and legally confirmed. At this time I had to do more writing and speaking than ever before… Our work received wholehearted support from Lenin. And Trotsky, although he was overburdened with military tasks, unfailingly and gladly appeared at our conferences. Energetic, gifted women, two of whom are no longer alive, sacrificially devoted all their energies to the work of the Coordinating Office.

At the eighth Soviet Congress, as a member of the Soviet executive (now there were already several women on this body ), I proposed a motion that the Soviets in all areas contribute to the creation of a consciousness of the struggle for equal rights for women and, accordingly, to involve them in State and communal work. I managed to push the motion through and to get it accepted but not without resistance. It was a great, an enduring victory.

A heated debate flared up when I published my thesis on the new morality. For our Soviet marriage law, separated from the Church to be sure, is not essentially more progressive than the same laws that after all exist in other progressive democratic countries. Marriage, civil marriage and although the illegitimate child was placed on a legal par with the legitimate child, in practice a great deal of hypocrisy and injustice still exists in this area. (…) The most radical wing of the Party was formed around this question. My theses, my sexual and moral views, were bitterly fought by many Party comrades of both sexes: as were still other differences of opinion in the Party regarding political guiding principles. (…)

Translation by Salvator Attansio, published by Herder and Herder, 1971.